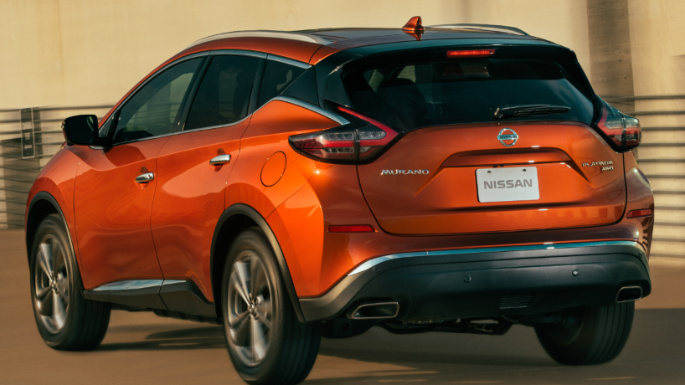 The Nissan Murano is a midsize, two-row near-premium crossover. Based on cars such as the Nissan Maxima, it emphasizes comfort and style over outright practicality and off-road abilities like Nissan’s smaller Rogue and larger Pathfinder and Armada.

Thus, the Murano’s distinctive exterior design, plush interior accommodations, and a more comfortable ride are reminiscent of a luxury sedan rather than a family-oriented crossover.

All but the base model now include Nissan’s Safety Shield 360 suite of advanced driver assistance features, which include items such as adaptive cruise control, blind-spot warning, and lane-departure warning.

The Murano is available in four trim levels: S, SV, SL, and Platinum. 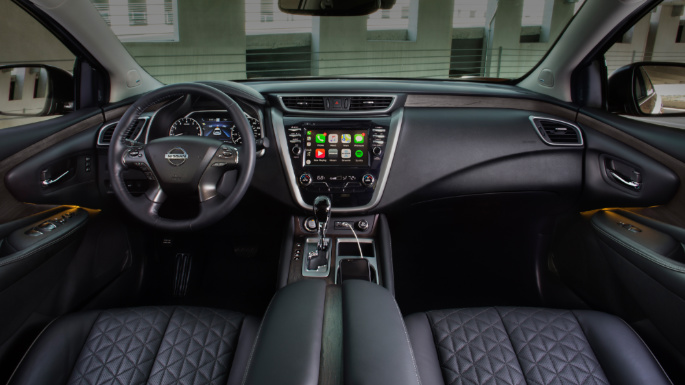 The Insurance Institute for Highway Safety (IIHS) gave the 2020 Murano a ‘Good’ rating in all crash tests, including front and side tests. It also gave it the highest’ Superior’ rating in crash prevention with its standard automatic emergency braking. The National Highway Traffic Safety Administration (NHTSA) awarded the 2020 Murano five stars in overall testing, including front, side, and rollover evaluations.

All 2020 Murano models get standard automatic emergency braking, and only the base model does without adaptive cruise control, blind-spot monitoring, rear cross-traffic alert, lane-departure warning, and lane-keep assist, and automatic high beam assist.

These features are part of the optional Technology Package on the base S model, and some rivals include this equipment on every model as standard. 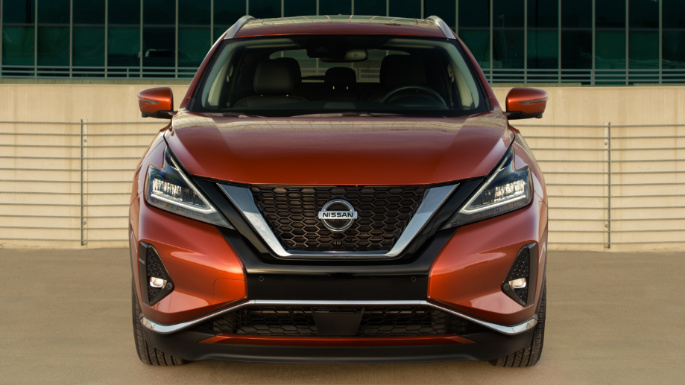 The base Murano, at just over $33,000, is relatively well-equipped with alloy wheels, dual-zone automatic climate control, and modern technology features; opting for all-wheel-drive pushes it over $35,000.

One level up, the SV adds common features such as a power driver’s seat and the suite of driver assistance features that includes adaptive cruise control and rear parking sensors.

Even adding the Premium Package with the dual-pane moonroof and heated seats will keep the price around $40,000 for an all-wheel-drive model. SL and Platinum models add a lot of other features, like leather upholstery, but it starts to nudge the price closer to larger SUVs or base versions of premium models.

The Murano is also among the least expensive of its immediate peers. While a Honda Passport is slightly less expensive, its base models lack features such as Apple CarPlay and Android Auto. The Volkswagen Atlas Cross Sport is also less expensive but comes standard with a less powerful turbocharged four-cylinder instead of the Murano’s V6. The Buick Envision, Hyundai Santa Fe, and Kia Sorento are also less expensive but have less standard horsepower and features. 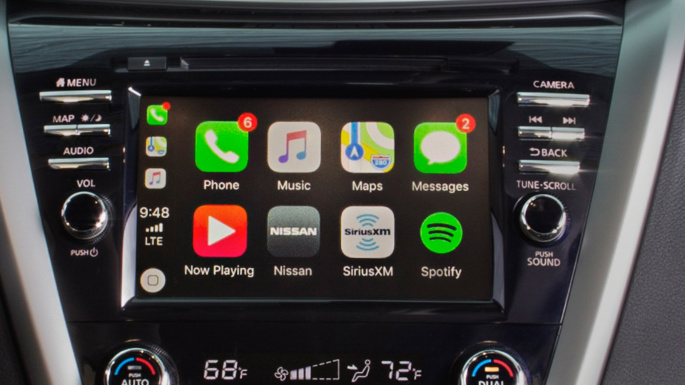 All Muranos get an eight-inch touchscreen infotainment system with Apple CarPlay and Android Auto connectivity as standard, along with four USB ports (including 2 USB-C ports).

The Platinum model comes with NissanConnect Services, which enables Amazon Alexa or Google Assistant skills to remotely lock or unlock the vehicle, start the engine, or flash the lights, among other features.

In addition to the advanced driver assistance features on most models, all cars get a push-button start and keyless entry.

SL and Platinum models add touches such as a surround-view camera system, hands-free power tailgate, and a power-adjustable tilt and telescoping steering wheel with 2-position memory that automatically moves away upon entry and exit. Those are relatively premium features unusual of the class.

Despite these strengths, the Murano is starting to lag behind the times on technology. The seven-inch driver’s display is clear, but it’s no match for VW’s Digital Cockpit on higher-end Atlas Cross Sport models, or the 11-inch vertical touchscreen that comes on many versions of the Subaru Outback. And Buick and Chevrolet use infotainment systems that offer standard telematics on all models, as well as bright and clear icons with a responsive screen, while the Jeep’s touchscreen-button combination is still among the best in the business. 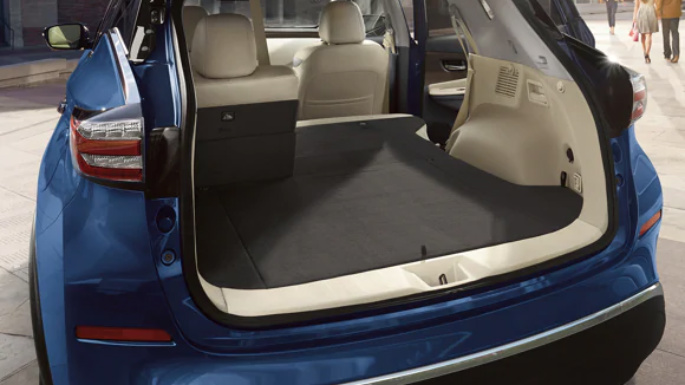 Passenger space is the Murano’s calling card. The front and rear seats are spacious, and the vehicle is wide enough for five passengers to travel in reasonable comfort. The rear seats are 60/40 split, and while they fold mostly flat, they don’t do anything particularly interesting, such as offer a ski pass-thru, and the front passenger’s seat can’t be folded for more cargo space.

However, the Murano’s styling and priority on rear-seat space take their toll on overall space. With 32.1 cubic feet with the rear seats up and 67 cubic feet with them down, the Murano falls in the middle of the class for cargo space. The Ford Edge, Subaru Outback, and VW Atlas Cross Sport all have between 73 and 77 cubic feet of cargo space, while the Honda Passport trumps them all with about 100 cubic feet. Meanwhile, the Buick Envision, Chevrolet Blazer, and even Jeep Grand Cherokee are considerably smaller.

The Murano is rated to tow a maximum of 1,500 pounds. That’s on the low side when at least some versions of rivals can tow around 3,500 pounds when properly equipped. And some versions of the Jeep Grand Cherokee can tow more than 7,000 pounds. While a Murano can tow a small trailer in a pinch, those looking to tow more should look elsewhere. 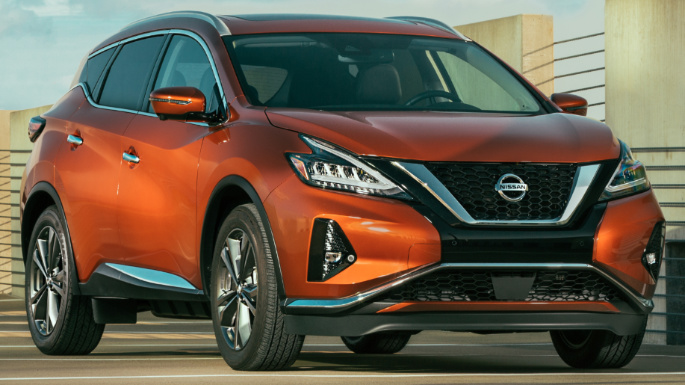 The Murano is defined by its styling, more reminiscent of a sedan or wagon than an SUV. It doesn’t pretend to have off-road abilities, which is good because it largely lacks them. Its lines are more upscale than that of the rugged Subaru Outback or Honda Passport, less aggressive than a Chevrolet Blazer or VW Atlas Cross Sport. The Buick Envision and Ford Edge also have designs that don’t pretend they’re for the muddy trails, but the Murano still stands out a little more – whether that’s a good or a bad thing.

That exterior styling, however, doesn’t do visibility any favors inside, so there are some fairly large blind spots to the rear and sometimes the sides. At least there are large windows that give good forward visibility, even if the bumps in the hood might make seeing out more difficult than in some rivals.

At least the interior is both well designed and made of quality materials. All models get six cupholders scattered around the cabin, as well as large bins and storage places for phones and wallets. Base models feel slightly spartan, but upper trims have high-quality leather and convincing fake wood trim around the cabin. While the central touchscreen isn’t large by modern standards, it falls readily to hand, and there are numerous physical controls for often-used tasks. The gauges are exceptionally clear, too. 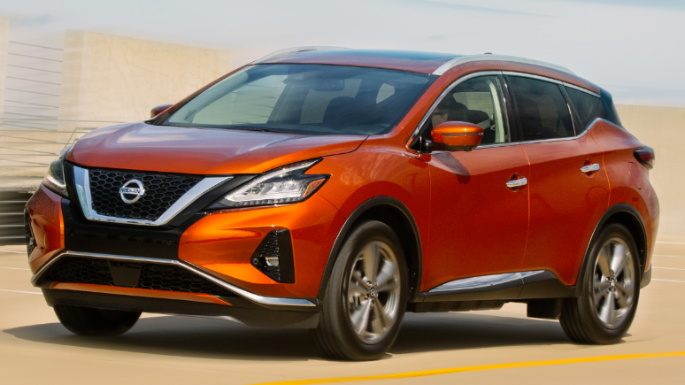 All models get a 260-horsepower, 3.5-liter V6, which sounds like it shapes up favorably to some of the competition’s base engines. The only transmission choice in the Murano, however, is a continuously variable transmission that lacks choice for manual “gear’ selection, unlike some rivals with eight or nine-speed transmissions. The engine struggles under the Murano’s weight, and it can struggle at times, which causes the engine to be loud. Hyundai and Kia offer better performance with their upgraded V6s, and the Honda Passport and Subaru Outback XT are also relatively athletic. The Murano is more on par with the equally heavy Jeep Grand Cherokee.

The Murano has a soft ride and soft seats, giving the driving experience more the impression of a full-size sedan, such as a Nissan Maxima, rather than an SUV. For that experience, look to the Jeep Grand Cherokee or Honda Passport. But the handling is also soft, too, and it doesn’t strike a balance between comfort and agility as well as the Hyundai Santa Fe or Kia Sorento. Even the comparatively utilitarian Subaru Outback is better in this regard.

Slightly blunt responses also hinder the Murano’s agility in tight spaces. While none of its rivals are particularly agile, the Outback is perhaps the handiest in tight spaces. The Nissan feels like a bigger vehicle than it actually is, not far off of larger, three-row SUVs. 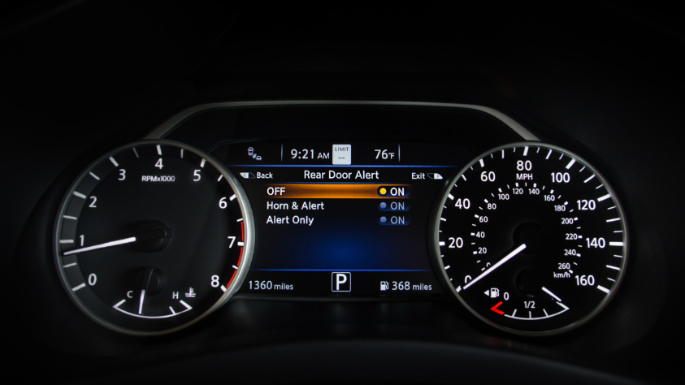 The Subaru Outback XT models with a similarly powerful engine are rated at 30 mpg highway and 26 combined, and Outbacks without the turbo engine get even better fuel economy, although they’re very far down on power.

The Buick Envision, Hyundai Santa Fe, and Kia Sorento also get better mileage than the Murano, but only with their base engines that are as much as 75 horsepower down on the Nissan’s V6. 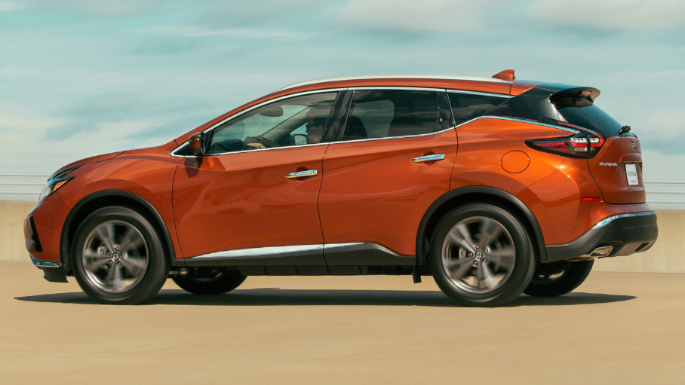 The 2020 Nissan Murano lineup comprises four trim levels, and all of them offer all-wheel-drive.

Apart from all-wheel-drive, a dual-pane moonroof is the only other option.

All-wheel-drive is the only option.