The Murano is a midsize crossover SUV that slots between the compact Rogue and the three-row Pathfinder in Nissan's crossover lineup. It's a five-seat, four-door model with a slightly upscale flavor to it; its tenure has been notable for the expressive and sometimes experimental design cues on the exterior. The Murano was one of the original entrants in this fast-growing segment; other models include the Ford Edge, Hyundai Santa Fe, Honda Passport, Chevy Blazer and Toyota Venza. 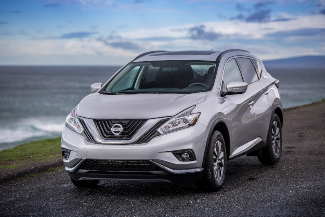 The third generation of Murano debuted for the 2015 model year, and it continued to use the Nissan D platform. The 3.5-liter V6 carried over from the previous generation and put out 260 horsepower. It was paired with a CVT; front-wheel-drive was standard and all-wheel-drive was an option.

The wheelbase also remained the same as the previous generation at about 111 inches. The Murano for this generation won the Ward's 10 Best Interiors award in 2015.

For the 2016 model year only, Nissan offered a Murano Hybrid. This version was available in the SL and Platinum trim. It included an electric motor with a 2.5-liter supercharged four-cylinder engine and a CVT automatic gearbox. Front-wheel-drive was standard and all-wheel-drive was an extra $1,600.

The hybrid elements did not reduce interior space for either passengers or cargo. The Murano Hybrid included a Vehicle Sound for Pedestrians system that made noise to alert pedestrians in the way of the vehicle while it was being driven at low speeds in the electric mode.

Nissan updated the Murano for 2019, giving the crossover a nip and tuck around the headlights and taillights, additional advanced safety gear, more available colors, and the addition of Apple CarPlay and Android Auto connectivity. 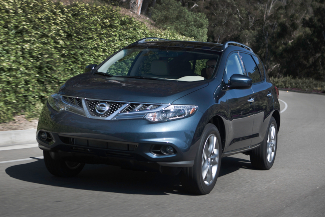 The 2008 model year was skipped for the Murano before the second-generation debuted for the 2009 model year. Both the exterior and interior were restyled for this generation. The new Murano was built on the Nissan D platform, which was shared with the Altima, Maxima and Pathfinder.

Three trim levels were offered to start, including the base S trim, the SL and then the LE as the top trim. The previous performance trim of SE was discontinued for this generation. The S and SL trims came with a standard FWD layout with an optional intelligent four-wheel drive. The LE trim came standard only with the intelligent AWD system.

All models came with a 3.5-liter V6 with between 260 and 265 horsepower; it was paired with a CVT. Fuel economy for this generation was rated at 18 in the city and 23 on the highway.

Other new standard and optional features on the Murano included wipers with rain sensors, power fold rear seats, power liftgate, touchscreen navigation and leather seats. The S and SL trims had aluminum accents in the interior while the LE trim had wood accents.

All trims offered standard safety features such as disc brakes on all wheels, ABS, electronic stability control and front and side airbags. This time the NHTSA gave the Murano four stars on the front crash test and five stars for side crashes, which was a downgrade from the previous generation.

The 2011 Murano got a facelift with restyled front and rear exteriors, new headlights and 18-inch wheels. Interior design included additional equipment, new plastic to match the leather and white meters instead of red or orange.

A new exterior color was added in "Graphite Blue" and the LE trim was renamed to the Platinum trim for the 2013 model year.

Another debut for the Murano in this generation was the CrossCabriolet, an unusual two-door convertible crossover. It used a power-folding cloth top with dual pop-up roll bars and came in LE trim only; the engine and transmission were the same as the standard Murano. The vehicle was discontinued the next year. 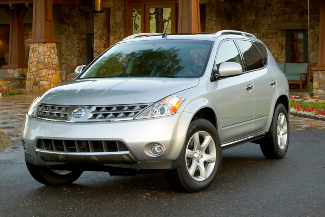 The Murano was Nissan's first crossover for the North American market and it was designed in California. It used a Nissan platform that it shared with the Altima, Maxima, Quest and others. Its unique (some would say oddball) styling set it apart from the rest of the blocky SUVs of the era).

The first generation of Murano remained Nissan's only crossover in the U.S. until the debut of the Rogue for the 2008 model year.

The Murano slotted between the larger Pathfinder and the smaller Xterra during this generation.

The only available engine in this generation was a 3.5-liter V6 that put out 245 horsepower. It was combined with a CVT transmission (one of the largest vehicles at the time to use this type of gearbox) and offered standard front-wheel drive and optional AWD. The fuel economy was 18 mpg in the city and 23 on the highway and both FWD and AWD versions were rated the same.