The WRX started as a turbocharged road-going rally version of Subaru's mainstream Impreza compact car. It has always featured standard all-wheel-drive (AWD) and aimed at performance compacts. Eventually, Subaru separated the WRX from the Impreza line and became an all-wheel-drive performance car, a core model for the company.

While the WRX launched in Japan in 1992, the US had to wait until 2002, but it quickly became a sell-out success because of its motorsport association with famed driver Colin McRae a World Rally Championship legacy.

The WRX has focused on performance and precision rather than creature comforts, offering the performance of cars costing twice as much. And unlike high-performance derivatives from manufacturers like BMW and Ford, And because of that, it's created a following among driving enthusiasts and tuners in the JDM community with numerous companies offering performance and styling upgrades. 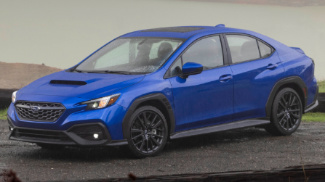 For 2022, the Subaru WRX was revamped entirely. It made several breaks with the previous model, joining a new platform shared with most of the Subaru lineup. That meant more features that used more modern parts now that it was in a lineup of Subaru sports cars that included the BRZ coupe.

A larger 2.4-liter turbocharged boxer four-cylinder replaced the old 2.5-liter engine and slightly bumped power to 271. Still only offered as a sedan, the 2022 WRX continued to come standard with a six-speed manual transmission or optional continuously variable automatic transmission (CVT), except on the new top-line GT model that only offered the CVT.

A high-performance WRX STI version is expected to follow for 2023.

The third-generation WRX appeared for 2015, separated from the Impreza in Subaru's lineup. The company decided to pitch the WRX as a more focused performance car. But controversially to some enthusiasts, it was only available as a sedan.

The WRX used a 2.0-liter turbocharged four with 268 horsepower, with direct injection for the first time. A six-speed manual was standard. Also, controversially, it changed the automatic option to a continuously variable transmission (CVT).

The new model grew slightly over its predecessor and, again, more refined. Features such as leather upholstery and navigation were available on higher-end versions, as were appearance packages. A new option on automatic-equipped vehicles was the Subaru EyeSight group of driver-assistance technologies that included automatic emergency braking, lane-keep assist, and adaptive cruise control.

The WRX STI continued with its six-speed manual as the only transmission and a revised 2.5-liter turbocharged four, first with 305 horsepower and, later, 310. Special design details, including a larger wing on the trunk lid, completed the package. For 2019, a special-edition STI S209 limited edition was released with 341 horsepower.

But apart from modest changes, the third-generation WRX was mostly unchanged for seven years as Subaru focused on its popular SUVs like the Outback, Forester, and Ascent. Finally, after seven years, a new WRX was ready. 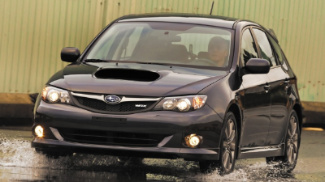 The second-generation Impreza WRX arrived for 2008, alongside the mainstream Impreza model. It was offered again as a four-door sedan, but Subaru also added a new five-door hatchback to replace the wagon.

The 227 horsepower, 2.5-liter turbocharged four-cylinder from the previous generation returned, but only with a five-speed manual transmission. If buyers wanted an automatic transmission, Subaru offered the Impreza 2.5GT that lost some features from the WRX.

The new WRX also grew slightly, with more creature comforts and a more modern interior design. Top-end Limited models offered leather upholstery and eventually a built-in navigation system. In addition, the ride was made softer, and the whole vehicle became more refined, even if it lost some of the edginess of the previous model.

STI models returned with its 2.5-liter turbo four and 300 horsepower, only in hatchback configuration. It also received a six-speed manual gearbox and various styling enhancements, such as a revised front end and wider fenders. A sedan version arrived in 2010, along with a few changes to address customer complaints about handling and steering.

The WRX was updated for 2011 to incorporate suspension tweaks to make the handling more accurate and the ride stiffer and changes to the front bumper. It also became known simply as the WRX, dropping its connection with the Subaru Impreza. The standard cars were redesigned for 2012, but this generation continued production. So from now on, Subaru removed the direct link with the Impreza. 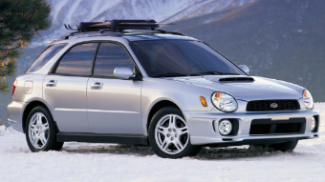 The first generation WRX to reach the US was, in fact, the second generation for the car globally. Yet it was closely related to the first car that never made it to North America, sticking to its rally car-inspired format — even if Subaru toned it down for driving on the road.

To coincide with the global second-generation Impreza line, the WRX arrived for the 2002 model year for the first time in the US. It came as either a four-door sedan or a five-door wagon.

Both versions received a 2.0-liter turbocharged four-cylinder engine with 227 horsepower, all-wheel-drive, and a five-speed manual. In addition, a four-speed automatic was an option. Apart from some minor modifications, such as a hood scoop, it looked a lot like a standard Impreza inside and out and shared most of the interior.

In 2004, the Japanese automaker slightly altered the front exterior styling, taking out the "bugeye" look for what became known as the "blobeye." The higher-performance Subaru Impreza WRX STI joined the line with 300 horsepower and a six-speed manual, some styling and other modifications that included a large rear spoiler, and only available as a sedan.

For 2006, the WRX model also received a new 2.5-liter engine for more torque, but still turbocharged and with 227 horsepower. In addition, both it and the WRX STI variants received another exterior facelift, with new lights and a new grille, and interior changes to the center console and new optional features such as leather upholstery and an in-dash six-disc CD changer. More sound insulation was also added.

Also in this generation, Subaru built the Saab 9-2X, creating a small model for the now-defunct Swedish brand. Available only as a wagon and also offered with the standard Impreza's non-turbocharged 2.5-liter four-cylinder, it mainly differed in front and rear exterior styling. Still, it shared nearly everything with the Subaru models.