A 148-horsepower, 2.0-liter four-cylinder with an electric motor is also available 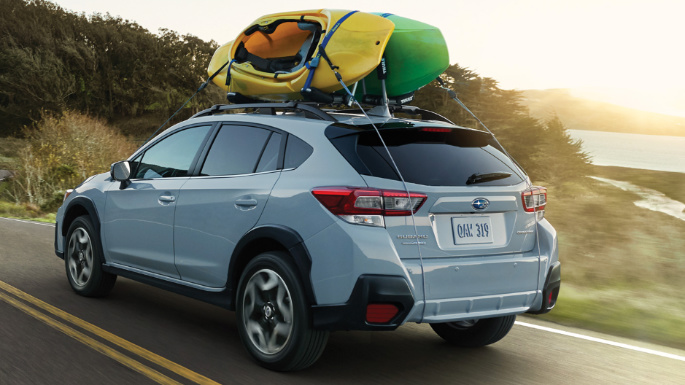 The Subaru Crosstrek is a small SUV aimed at buyers who want the capability of one of the company’s larger vehicles with standard all-wheel-drive, but want something less expensive and more compact that will easily fit in with urban settings. To that, the Crosstrek sticks closely to Subaru’s values of efficiency and rugged performance. It competes in a quickly growing class of small SUVs that also try and blend capability with a more compact size and increased fuel economy.

For 2020, the Crosstrek adds automatic climate control on all models. Eyesight driver assistance systems come standard on all models with the automatic transmission. Those cars also add an automatic engine start/stop function to improve fuel economy, as well as the Subaru SI-Drive system for selecting different driving modes depending on road conditions. A new Rear Seat Reminder alerts drivers there might be a person or a pet left in the rear seat when the ignition is turned off.

The Crosstrek comes in three trim levels with its standard gasoline-only powertrain. A Crosstrek Hybrid uses a gas-electric powertrain that can be plugged in for electric-only range. It’s only available in California and states that follow the California Air Resources Board (CARB) emissions standards. 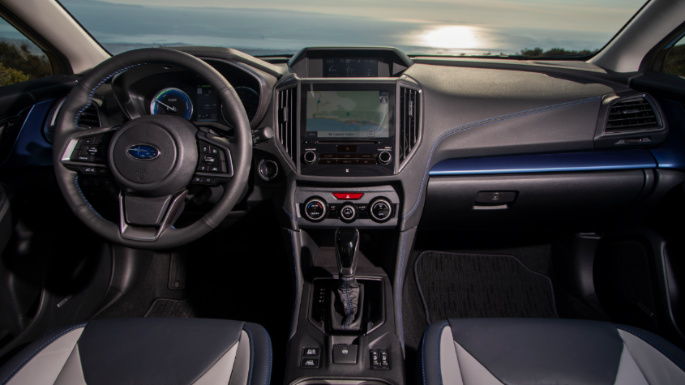 Automatic emergency braking is only standard on Crosstrek models equipped with the CVT, which is optional on base and Premium models, and unavailable with the standard six-speed manual transmission. Also included is the Eyesight driver assistance technology package, which adds pedestrian detection, forward-collision warning, driver alert monitoring, lane departure warning, lane-keep assist, and adaptive cruise control. Blind-spot monitoring is part of an option package on Premium models, while standard on Limited and Hybrid. The highest two trim levels also get LED headlights and automatic high beam assist. 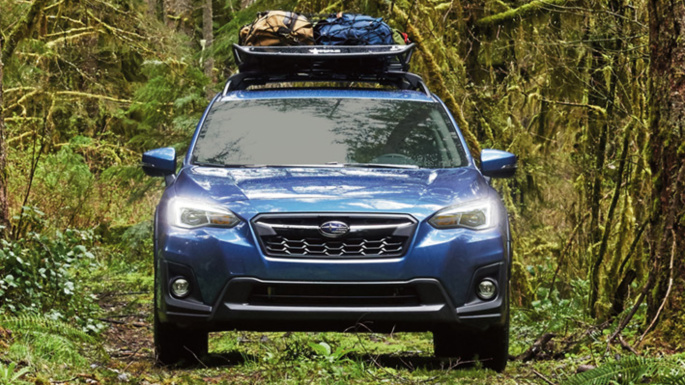 At just over $23,000 to start, the base Crosstrek is relatively well-equipped, especially considering it comes standard with all-wheel-drive, while its rivals charge as much as $2,000 extra for that capability. But then most rivals include an automatic transmission, which is a $1,350 option on base and Premium trim levels on the Subaru, so some of that cost savings is a wash. Still, the base model comes with 17-inch alloy wheels, a roof rack, Apple CarPlay and Android Auto compatibility, automatic climate control, and other features not necessarily standard on rivals.

The Premium is likely the best bet, however, as it adds a better audio system, cargo cover, heated front seats, and automatic headlights. Limited models can get downright expensive for what’s a relatively small vehicle, and for about $30,000, Subaru offers the more versatile Forester.

It’s hard to pin exactly the value proposition for the Crosstrek Hybrid, however. It’s the only plug-in hybrid compact SUV; the only other PHEV in its price range that also offers all-wheel-drive is the Mitsubishi Outlander PHEV a larger and more dated vehicle. The Mini Countryman SE All4 is about the same size as the Crosstrek and has about the same electric-only range, but it’s more expensive, and its combined gas-electric economy is substantially lower.

At more than $38,000 fully equipped, the Crosstrek Hybrid is nearly as expensive as top-end versions of the Subaru Outback, but it does qualify for local and federal incentives in the California emissions states it’s available in, partially offsetting the purchase price. 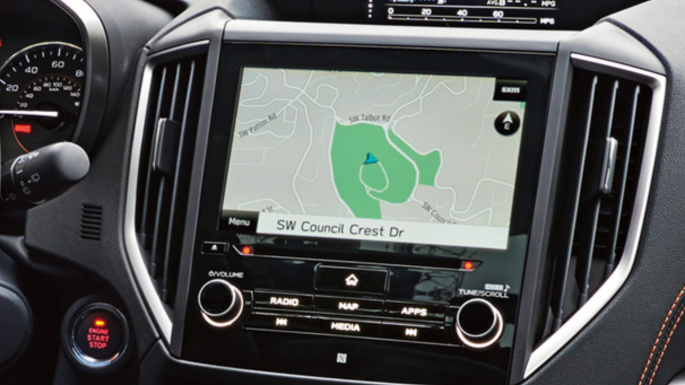 All Crosstrek models get a touchscreen infotainment system using Subaru’s Starlink software. Base and Premium cars get a 6.5-inch screen, while Limited and Hybrid models use an eight-inch version. Models with the eight-inch touchscreen also offer built-in navigation, and all cars get standard Apple CarPlay and Android Auto compatibility. That smartphone connectivity is essentially one of the few highlights of the Subaru system, as Starlink seems a generation behind many infotainment systems on the market now. The graphics look dated and the response times are slow. GM, Ford, Jeep, and even Mazda do better in this department by a long way.

Apart from the Eyesight driver-assistance features offered on all Crosstrek models, the base model gets one USB port, while the Premium adds a second one up front. Limited and Hybrid models add two more USB charge ports for the rear seat passengers, pretty much allowing all occupants to charge up a device. Subaru’s Starlink telematics systems offer emergency assistance, automatic crash notification, remote start and door lock functions, and vehicle diagnostic checks. The Hybrid model adds remote climate control and charging timer settings to the Starlink system. 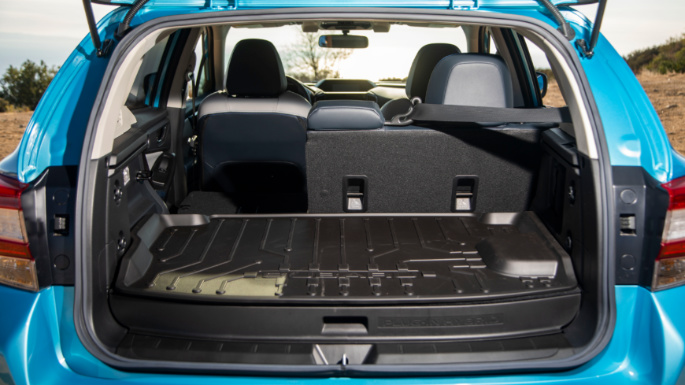 At just over 55 cubic feet of maximum cargo space, the Crosstrek is one of the larger small SUVs on the market, coming just short of the very spacious Honda HR-V’s interior. But the Crosstrek lacks the Honda’s versatility and seats that create a very low and flat floor and can be folded in numerous ways. Still, the Crosstrek has significantly more space inside than a Hyundai Kona, Kia Seltos, or Mazda CX-30, to name a few. The gasoline-only Crosstrek models are rated to tow up to 1,500 pounds, while the Hybrid is capable of up to 1,000 pounds.

There’s reasonable storage inside the Crosstrek, but nothing particularly novel about the spaces. There are cupholders for front-seat passengers, as well as large door bins for bottles and other odds and ends, but only the Limited and Hybrid models get a rear armrest with integrated cupholders, as passengers in lower trim levels will have to utilize the door pockets. Up front, the center console has a small covered bin, but there isn’t anywhere particularly clever to store phones or wallets. 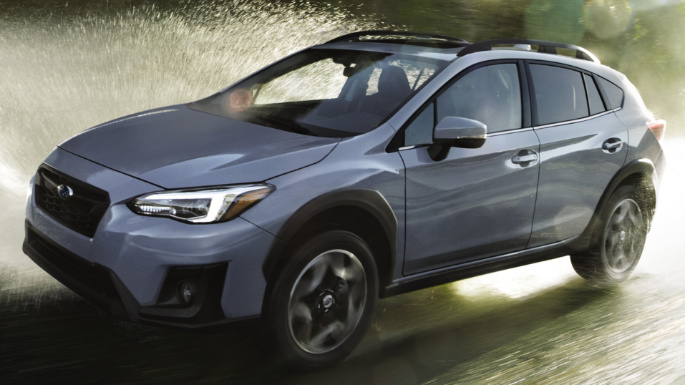 The Crosstrek is unmistakably a Subaru, resembling a very shrunken Outback with its generous helping of black lower cladding, all-season tires, and relatively functional shape that surrounds its practical interior. Some buyers, however, may find the Crosstrek looks slightly more youthful than the larger Outback; Subaru capitalizes on that with a choice of brighter colors. Hybrid models get some special color choices and silver lower trim on the exterior, as well as special 18-inch wheels. Base and Premium cars come standard with 17-inch wheels, while Limited models upgrade to 18-inch ones.

The function-over-form philosophy is carried over inside, where the Crosstrek is far from luxurious. Base and Premium models get rugged-looking cloth upholstery with some colorful stitching, but the plastics feel relatively utilitarian. Limited and Hybrid models get leather upholstery and a power driver’s seat, but it doesn’t make for a plush experience. While the infotainment system is slightly confusing, there are knobs for audio controls and climate controls, both of which are straightforward to use. 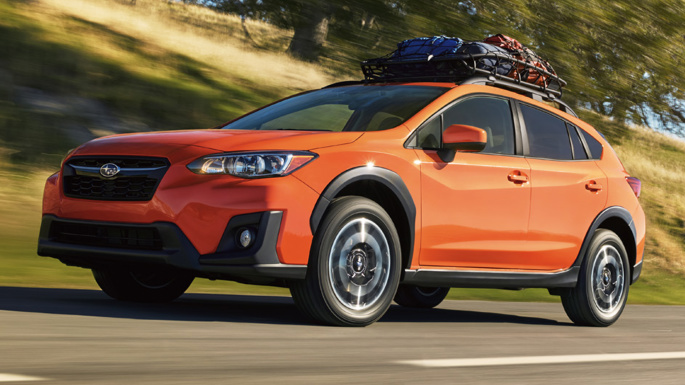 The Crosstrek comes with a 152-horsepower, 2.0-liter four-cylinder engine. Base and Premium models use a standard six-speed manual transmission, while a continuously variable transmission (CVT) is optional on those models and standard on the Limited.

On Premium and Limited versions, the CVT gets shift paddles mounted on the steering wheel and preset ratios that mimic an eight-speed automatic transmission. Not that it really helps acceleration, however, as the Crosstrek is far from quick. Acceleration times are comparable to a Honda HR-V and better than a Chevrolet Trax, but the Mazda CX-30’s additional 34 horsepower is welcome, as is its more typical six-speed automatic transmission.

Apart from the acceleration, the Crosstrek fares well against its small SUV rivals. It’s slightly more composed than some, owing to the more substantial pieces that come from the compact Impreza line rather than a subcompact car. The suspension keeps the ride compliant over large bumps, even if the interior isn’t quite as hushed as in the Buick Encore GX or Mazda CX-30.

The Subaru has an edge over most small SUVs in modest off-road conditions, with a generous 8.7 inches of ground clearance and its selectable driving modes. Its short wheelbase means it’s also more maneuverable in tight spaces, or even getting out of snowy driveways. Only the Jeep Renegade matches the Crosstrek on ground clearance, and only in pricey Trailhawk trim does it surpass it on truly tough terrain. 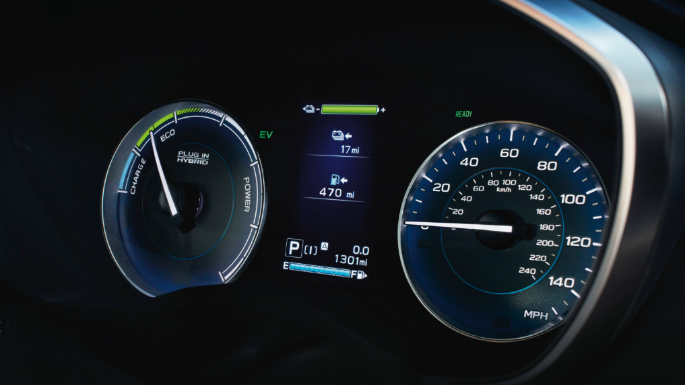 The manual transmission-equipped models post disappointing fuel economy, but given that most Crosstreks get the CVT, these figures are competitive with all-wheel-drive rivals such as the less powerful Honda CR-V and better than the more powerful Mazda CX-30. 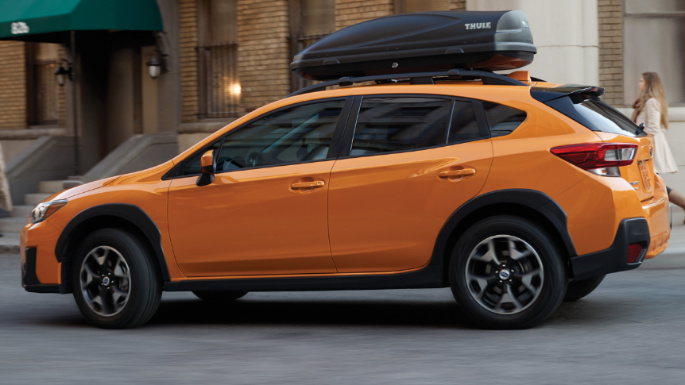 A CVT with the Eyesight package is optional, as is another package with the CVT and shift paddles, Eyesight, power moonroof, blind-spot monitoring, and keyless entry and push-button start. An upgraded version of that package also adds a six-way power driver’s seat.

A power moonroof is optional, as is another package with the moonroof, Harman/Kardon audio system, and built-in navigation.

The Crosstrek Hybrid starts from $36,115 MSRP. It gets a 148-horsepower gas-electric powertrain with a 2.0-liter four-cylinder engine, 18-inch lightweight wheels, low-profile roof rails, blue stitching accents on the interior, hybrid power meter in the instrument panel, and a 6.3-inch color driver information display.

A Crosstrek Hybrid tops out at $38,655 before applicable local and federal electric vehicle incentives.