The Toyota 4Runner began life as a smallish, two-door SUV but eventually morphed into the mid-size, rugged SUV that it is today. When it started production in 1983, the earliest versions were essentially Toyota 4x4 pickup trucks with a roll bar and hard shell over the bed and rear seats installed inside. Throughout its lifespan, the 4Runner has earned a reputation as one of the more capable and rugged SUVs on the market and enjoys a fiercely loyal following. 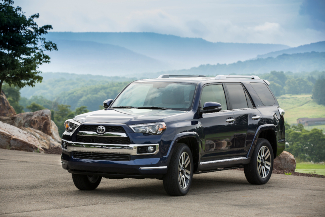 In 2009, the fifth-generation 4Runner debuted during the 2010 model year. Its exterior design moved away from the more rounded lines of the previous generation and instead took a cue from the 4Runner's truck-based heritage. This generation initially offered three trim levels, two of which carried over from before. The new addition was the four-wheel-drive Trail Edition, which featured the carmaker's Kinetic Dynamic Suspension System and a rear locking differential. Engines offered in this generation included the 2.7-liter 2TR-FE inline-four and the 4.0 liter 1GR-FE V6. A four-speed automatic transmission was only available with the inline-four in 2010, with the other models featuring a five-speed automatic. Safety ratings for this generation were largely good with only one marginal rating in the small overlap frontal offset category.

For the 2014 model year, the 4Runner received a complete set of upgrades. The front and rear fascia were completely revised for an all-new body style including projector headlights and LED tail-lights. It also included a revamped interior with a completely redesigned dashboard and Optitron instrument cluster. The drivetrain, however, remained unchanged and featured the same 4.0 liter V6 as previous incarnations.

The 2015 model year saw the release of the TRD Pro trim level. This was designed as more of an off-road vehicle than in recent incarnations and included Bilstein shocks as well as TRD off-road-tuned front springs and a skid plate for even better off-road capabilities. 4Runner models during this year also got the new Entune infotainment system which included a 6.1-inch touchscreen display and a backup camera.

The largest upgrade to the fifth-generation 4Runner came during the 2020 model year. All trim levels for this year included the Toyota Safety Sense-P system standard, which is a complete driver awareness system that consists of a pre-collision sensor, pedestrian detector, lane tracing assistance, and more. They also received an upgrade to the Entune infotainment system that gave it a higher-resolution display and wireless capabilities. 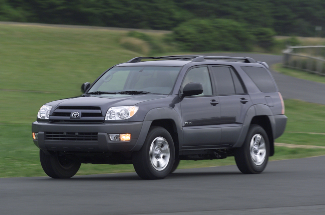 By the introduction of the fourth generation 4Runner, the SUV was markedly different from its earliest beginnings. More changes to the body and chassis debuted at this point, giving it the option of third-row seating and making it look like a semi-luxury SUV in the midsize class much like the Land Cruiser Prado. Though the 4Runner still had off-road credibility, it also was marketed more to full-time on-road consumers. Available engines in this generation included the 4.0-liter V6 and a newly-introduced 4.7-liter V8, which by the 2005 model year had an output of 268 horsepower. However, it still featured relatively high fuel economy or that kind of power at 15 mpg city and 19 highway. The manual transmission was dropped in favor of a four-speed and five-speed automatic. This generation came in three trim levels, including the Toyota 4Runner SR5, Sport Edition, and Toyota 4Runner Limited. A double wishbone suspension was introduced in the front and the rear was a solid rear axle. However, in a nod to its past, this generation continued to use the body-on-frame design, which somewhat reduced interior room as well as handling on-road. This was in contrast to the Highlander, Toyota's other midsize entry, which was explicitly designed only for on-road use. 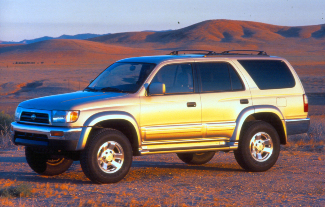 The third generation of 4Runner saw a shift into the midsize SUV class and more deviation from the standard pickup appearance. The major redesign introduced a new body shell on a new chassis for a five-door wagon, and it no longer looked exactly like the Toyota pickup. It was aimed more at on-road consumers and became more luxurious inside and out with additional cargo space. The main available engines included the 2.7-liter inline-four and the 3.4-liter V6. Four-speed automatic and five-speed manual transmissions remained the standard options. Other significant changes from the second generation included a longer wheelbase, more cargo and passenger space, dual airbags, lifting tailgate, all-around coil springs, ABS, and rack, and pinion steering. The 1999 models further enhanced the cosmetic appearance of the 4Runner with upgraded safety bumpers, improved interior ergonomics, and a new instrument cluster. The 2001 model year also saw a newly designed grille and five-spoke wheel rims. 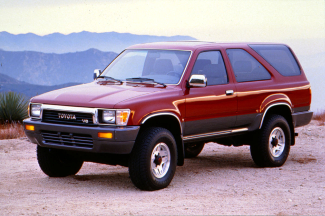 The majority of 4Runners in this generation were standard four-door SUVs, though in the early years of this generation the three-door wagon models were available. Engines in this generation included the sturdy 2.4-liter 22R-E inline four and a 3.0-liter 3VZ-E V6. On the V6 models, the gear-driven transfer case was eventually upgraded to a chain-driven case. Four-cylinder models still used the gear-driven case. This 4Runner continued to have a pickup-style tailgate that required the window to be retracted first before opening, unlike some of its rival SUVs at the time that had upward-opening tailgates with closed glass. The rear suspension system was upgraded to coil springs. 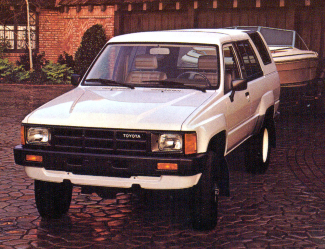 The first generation of 4Runner was scarcely more than a filled-in Toyota 4x4 pickup. It only had two doors and the front of it looked identical to the Toyota trucks of the era. While the roof above the driver and passenger was fixed-metal like the trucks, the cab covering the rear seats and the cargo area was removable fiberglass; this was the only generation of 4Runner to offer this setup.

Due to the back end not being reinforced to support the top and seats, the earliest generation was known to sag in the rear. The first 1984 engine was a 2.4-liter 22R rear-wheel-drive four-cylinder engine with a carburetor, though a four-wheel-drive system option was available. The 1985 model upgraded the engine to a 22R-E engine with fuel injection. The first carbureted engine continued to be available until 1988. In 1986, the 4Runner had a significant redesign of the front suspension that changed it from a solid front axle to an independent suspension. This allowed the 4Runner to perform more comfortably on-road and gave the engine compartment more space to fit an eventual V6 engine, which was introduced in 1987. The transmissions offered in the first generation included a four-speed automatic and five-speed manual.