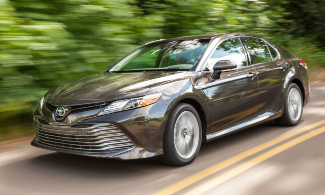 The current generation of the Toyota Camry offers two distinct trim levels, with a sporty SE and XSE trim aimed at wringing out more fun from the sedan, plus a hybrid variant and the standard L, LE and XLE trims.

The standard engine for all levels is a 2.5-liter, four-cylinder with 203 horsepower that gets 34 mpg combined. For the upgraded engine, the higher trim levels come with the option of a 3.5-liter V6 with 301 horsepower, which is rated at 26 mpg combined. Instead of the previous model's six-speed automatic transmission, all trim levels on the gas engines are now equipped with an eight-speed automatic transmission.

There's also the Camry Hybrid, available in LE, SE and XLE trims. It's powered by an electric motor paired with a four-cylinder engine for 208 total horsepower. It's paired with a CVT automatic transmission.

For 2020, Toyota introduced the performance-oriented TRD iteration. This model -- in V6 guise only -- comes with a host of upgrades to the chassis and the exterior design to give the normally ho-hum Camry a little more giddyup.

Though there's no power increase over the normal V6's 310-horsepower, changes include a rear spoiler, unique 19-inch alloy wheels wrapped in stickier rubber, larger brake rotors, and numerous tweaks to make the suspension and the body more stiff. 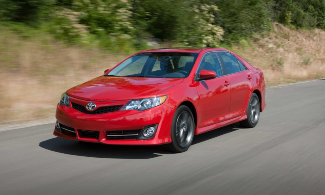 Fun fact: the seventh generation of the Toyota Camry was the last Camry to offer a manual transmission. However, most Camry models sold within these years came with a six-speed automatic transmission. The trim levels remain the same as the previous generation (CE, LE, SE and XLE).

However, the standard engine has been upgraded to a four-cylinder, 2.5-liter that makes 178 horsepower. The SE and XLE also have the option of upgrading to a 3.5-liter V6 with 268 horsepower.

This generation also comes with more standard features, including cruise control, power windows, and a power tilt-and-telescoping steering wheel. There are also ports for USB and Bluetooth. Additional features for the higher trim levels include keyless entry and sportier exterior accents such as aluminum wheels and better suspension. 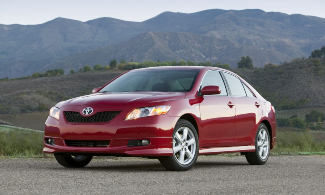 The sixth generation of the Toyota Camry introduced multiple options for its four-door, five-passenger sedan. Four trim levels were offered: the CE, LE, SE and XLE. All of the trim levels came equipped with a four-cylinder, 2.4-liter engine that made 158 horsepower. For those who wanted a larger motor, the LE, SE and XLE came with an optional 3.5-liter V6 engine with 268 horsepower.

This generation also saw the introduction of the Hybrid model that used both a gas engine and an electric motor. The Hybrid and the four trim levels came with various transmission options, including a five- or six-speed automatic transmission or the five-speed manual transmission. 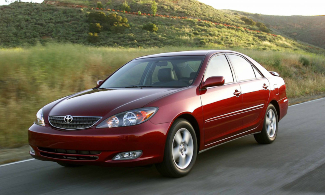 This generation of Toyota's venerable mid-size family sedan grew slightly larger while still providing drivers with the same performance and gas mileage as the smaller, earlier models. This generation notably outsold its rival sedans, making it the best-selling car in the U.S. for several years.

The engine options remained with the 4.0-liter and the V6, with horsepower ranging from 152 to 186 depending on the desired motor. 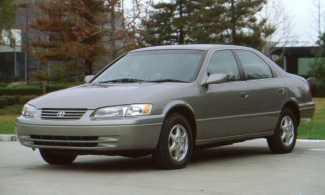 This generation also saw the introduction of two available versions of the model's engines. The choices included the 133 horsepower, 2.2-liter, four-cylinder engine or the 3.0-liter V6 that made 194 horsepower. The transmission choices remained the same, with the 4-speed automatic or 5-speed manual being the sole choices.

This was the last generation of Camry sold in the U.S. that offered a station wagon variant. This third-generation model featured cosmetic changes that gave it a smoother, rounded look and a larger overall footprint. For increased comfort, the model also featured a better air conditioning system and was better insulated to eliminate road noise.

This generation also introduced a 4-speed automatic transmission, as well as a four-wheel steering system and an optional 3.0-liter V6 engine. A 2.2-liter, four-cylinder engine was standard. This model also saw the switch from a carbureted fuel system to multi-point fuel injection. 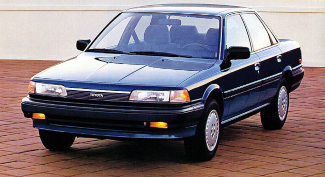 While the body style remained the same, the second generation of the Camry came with options not available on the previous generation. The 130-horsepower, four-cylinder unit was the base engine and the car also came with an all-wheel-drive system. A 2.5-liter V6 engine was also optional that made 160 horsepower. 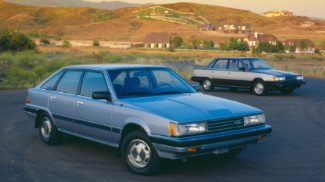 The first generation of the Toyota Camry was a small four-door sedan
with a 130-horsepower, 2.0-liter engine with a carburetor. This front-wheel-drive car was equipped with a 5-speed manual transmission and averaged 30.5 combined miles to the gallon. Acceleration from 0 to 62 miles per hour was 12 seconds, with a top speed of 108.2 MPH.