The newest installment in the fourth generation of Toyota's series of midsize SUVs, the 2020 Highlander is a four-door, seven- to eight-passenger family hauler with three rows of seats and either front-wheel drive or all-wheel drive.

The 2020 Highlander has numerous trim levels and a wide range of options, from a moonroof to a power liftgate. Visually, the redesigned version has more striking and expressive styling than the previous generation, while the interior is more comfortable and spacious than ever.

Hybrid models get a 243-horsepower gas-electric powertrain, which produces 175 lb-ft of torque. This model gets up to 36 mpg combined, according to the EPA.

Rounding out the Highlander's perks is an eight-inch touchscreen infotainment system and the Toyota Safety Sense 2.0 group of driver assistance features.

When it comes to competition, the midsize SUV market is crowded. The Highlander's rivals include the Kia Sorento, Subaru Ascent, Hyundai Palisade, Kia Telluride, and many more.

TLDR: Bolder than ever, the 2020 Toyota Highlander combines an expansive body with striking lines and shapes. 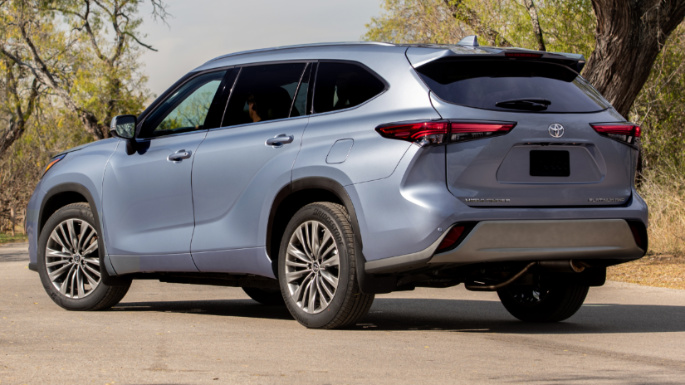 A midsize, three-row SUV, the 2020 Toyota Highlander sports an edgier styling than previous models. It features expansive fenders and a low roofline, and its side panels are more defined than earlier generations. The vehicle's front and rear tracks are also broader. Although the new Highlander might look more substantial than its predecessor, it's only 0.2 inches wider and 2.4 inches longer. The 2020 Highlander just seems bigger thanks to its bolder bodywork and 20-inch wheels. Compared to previous Highlanders, the 2020 model also has less rigid linework and bulgier sills and air intakes.

Some critics claims the Highlander has less stylistic appeal than the rival Kia Telluride but more than that of the Hyundai Palisade or Subaru Ascent.

TLDR: The 2020 Highlander is a bit cramped, but its multi-tier dashboard is great for storage.

This three-row SUV has a plush, comfy interior that comes with either optional leather seats or the standard cloth material. Though there are plenty of panels made from harder, cheap plastic, it's a functional design and layout. Overall, the cabin is well-organized and ergonomic, thanks to its generous array of bins and cubbies. 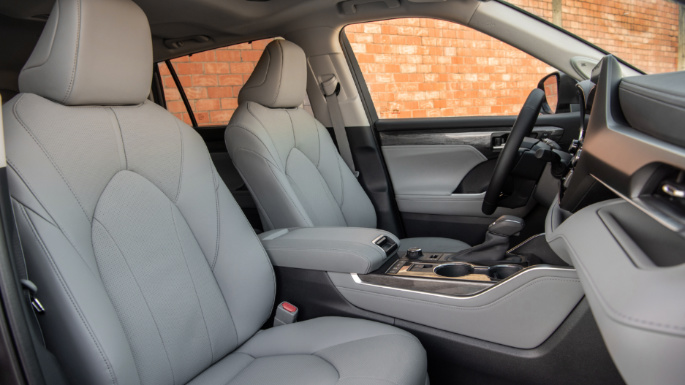 The Highlander's three rows seat eight people, unless you opt for the captain's chairs in the middle row, in which case the Highlander seats seven. Although comfortable, the front row has 0.8 inches less headroom and 3.8 inches less legroom than the previous model, while the second row has 0.5 inches less headroom but 2.6 inches more legroom. Space-wise, the third row can fit taller adults though a high floor means their knees eat into their space. Generally though, the Highlander's rear seats should be left for kids. The Buick Enclave, Volkswagen Atlas, and Hyundai Palisade/Kia Telluride are better for passengers in the rearmost seats.

Also, the second row doesn't tilt for entry to the third row, which some people may find frustrating. Higher trims have heated first- or second-row seats, and many other seat upgrades are available, including ventilated seats upholstered either SofTex synthetic leather or real leather upholstery. You can also get a heated or leather-wrapped steering wheel. A 12.3-inch infotainment screen dominates this Toyota's dashboard, with crisp visuals and user-friendly menus, while buttons below it allow for climate control. 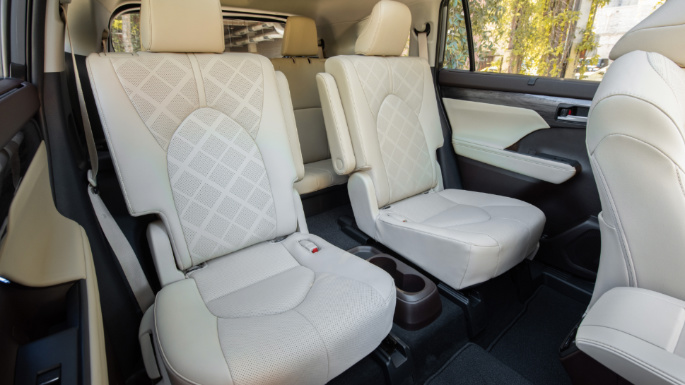 Some critics feel that the Highlander's interior looks too busy, owing to its silver-and-black trim and two-tone door panels. The outboard seats in the second row have LATCH connectors, while the middle seats in the back two rows have tethers. Also, the center storage bin has a convenient pass-through for USB ports.

TLDR: Whether you fold the seats down or leave them up, the new Toyota can store a lot of cargo.

The vehicle's total cargo space is an impressive 84.3 cubic feet when the second-row and third-row seats are both folded down. Even with just the third row folded down, the vehicle has an ample 48.4 cubic feet of cargo space. 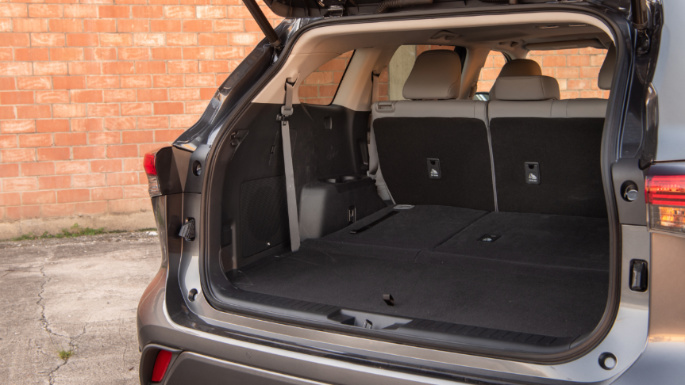 When all seating positions are up, you have 16 cubic feet of storage at your disposal. Although the Highlander doesn't have a two-piece liftgate, as some competitors do, higher trims have a power liftgate for convenience.

Built with heavy-duty hauling in mind, the 2020 Highlander has a weight capacity of 4,450 pounds and a towing capacity of 5,000 pounds.

TLDR: A new infotainment system is just the start of the 2020 Highlander's technological ensemble. 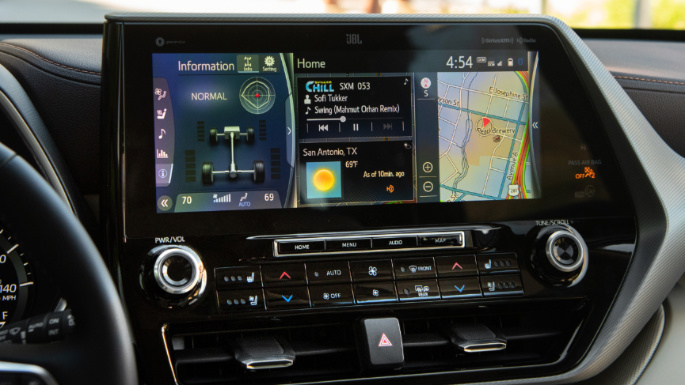 If you upgrade to the Limited trim level or higher, you get a 12.3-inch touchscreen with three free years of data updates along with the Destination Assist service. Higher trim levels also get access to HD Radio.

Some critics have praised the technology setup for its ease of use but criticized the screen for its potential glare. The Driver Easy Speak feature, which comes with all trim levels, lets drivers project their voice to the back of the vehicle. Dual-zone automatic climate controls sit above the dashboard vents, and a three-zone automatic climate control system is optional.

TLDR: Although not yet crash-tested, the 2020 Highlander has plenty of safety and driver assistance features.

The Safety Connect service, which comes standard with all 2020 Highlanders, allows SOS emergency calling and automatic collision notifications. For added peace of mind, every 2020 Toyota Highlander also comes with a three-year/36,000-mile limited warranty and five-year/60,000-mile powertrain warranty. Unlike most competitors, Toyota provides complimentary scheduled maintenance for two years or 25,000 miles.

The 2020 Highlander hasn't yet received ratings from the Insurance Institute of Highway Safety (IIHS) or the National Highway Traffic Safety Administration (NHTSA).

TLDR: This vehicle has a robust engine and a pleasant ride overall, though the steering can be sensitive. 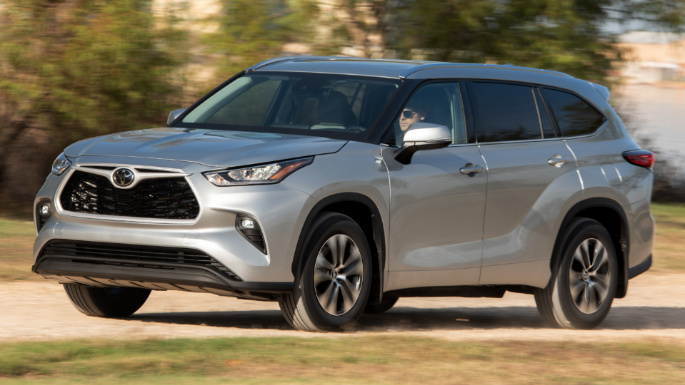 The V6 engine comes with 295 horsepower and 263 foot-pounds of torque.

The V6 and eight-speed transmission feel much the same as in earlier models, according to reviewers. It's plenty to get you around town and to drive on a daily basis but it won't overwhelm you with gusto.

Although the Hybrid's power rating is a step down from the 2019 Highlander's 306 horsepower, it has 25% greater fuel efficiency.

The hybrid model doesn't feel slow, according to critics, with some going so far as to says it's more athletic than the gas-only version.

Both the standard and hybrid versions of the Highlander come in standard front-wheel drive or optional all-wheel drive.

Both Highlander models have been praised for their crisp handling, considering its a larger crossover.

Even though the 2020 Highlander doesn't look that big compared to rivals, it feels much larger when you're sitting in the driver's seat.

The hybrid model, by comparison, has a lower center of gravity thanks to the weight of its battery and electric motors. 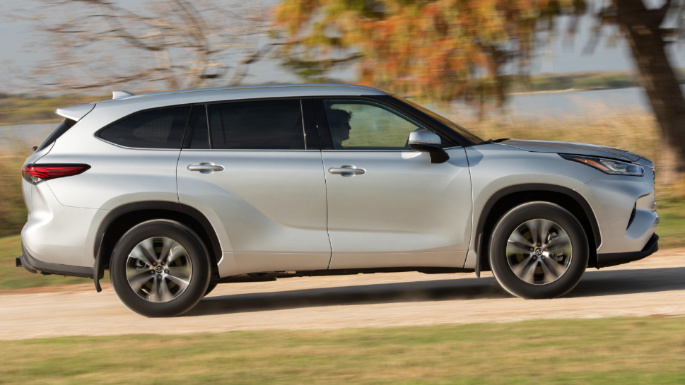 TLDR: Both the gas-only and hybrid models have a respectable fuel economy.

The front-wheel-drive 2020 Toyota Highlander is fuel-efficient for its class, netting 21 mpg on city roads and 29 mpg on highways, and a combined estimate of 24 mpg, according to the Environmental Protection Agency.

With AWD, the Highlander gets 20 mpg on city roads and 27 mpg on highways, with a combined rating of 23 mpg.

Naturally, the Highlander Hybrid has healthier fuel economy, with a combined mpg of 36. You can travel 600 miles in the Hybrid without needing to refuel, making it the most economical Highlander in history. The Platinum trim is slightly less fuel-efficient than lower trim levels, with a combined 23 mpg.

TLDR: A wide range of trims and equipment gives buyers a lot of choices.

The Toyota Highlander L, or base model, has an MSRP of $34,600 and boasts a ton of standard features, from the eight-inch infotainment touchscreen to the Safety Sense 2.0 driver assistance suite. This trim also boasts keyless entry, a rearview camera, a Wi-Fi hotspot, and many other conveniences.

For $36,800, you can jump to the Toyota Highlander LE, which sports a leather steering wheel, HD Radio, and extra safety features such as rear cross-traffic alert. LED foglights and a power liftgate also come with this trim.

The Highlander XLE, which has a price tag of $42,320, includes a host of extra amenities, such as a Qi smartphone charger and a power moonroof. It even boasts captain's chairs in the second row.

If you want to splurge, you can buy the $44,770 Limited trim instead. The Highlander Limited comes with almost every feature available at lower levels plus puddle lights on the side mirrors, a 360-degree bird's-eye camera, and torque vectoring for AWD.

The Platinum trim, which costs $47,970, boasts 20-inch alloy wheels, a 120-volt power outlet, and much more. The Highlander Hybrid, an alternative to gas-only Highlanders, has a $1,400 upcharge. It comes in all the same trim levels as the gas-only Highlander, except for the L trim.

The 2020 Highlander has the space, comfort, and fuel efficiency for reliable family hauling. With a price range between roughly $34,000 for a bare-bones base model and over $50,000 for a hybrid model with all the bells and whistles, the 2020 Highlander spans a wide range of pricing, though it's competitive against its segment.

However, other SUVs beat it in several areas. The Toyota RAV4, for example, is cheaper (but also smaller), while the Subaru Ascent boasts a larger cargo area, as do the Chevrolet Traverse and Volkswagen Atlas.

The Toyota Highlander has a plusher and more comfortable interior than the Ford Explorer, but the Kia Sorento and Telluride have even higher-quality cabin materials, not to mention sharper handling. The Mazda CX-9, though more cramped in the third row, also has better interior materials and crisper handling.

Overall, the 2020 Toyota Highlander is one of the best midsize SUVs on the market.