The 2019 Toyota Prius is the latest refresh of the fourth generation of the long-popular gas-electric hybrid vehicle. Competing against similarly-sized hybrids including the Chevy Volt, Honda Insight, Kia Niro, and Hyundai Ioniq — as well as larger hybrid sedans like the Honda Accord and Toyota’s very own Camry — the 2019 Toyota Prius holds its own thanks to excellent fuel economy, award-winning safety performance, and a host of all-new features. Great for families, commuters, rideshare professionals, and drivers in search of a high-mpg new car that doesn’t sacrifice comfort for fuel economy.

New to the 2019 Toyota Prius is the addition of an all-wheel drive (AWD) option available on LE AWD-e and XLE AWD-e models. The 2019 Toyota Prius is the first hybrid sedan to offer an AWD option, making it an attractive choice for those who may be driving in inclement weather or steep terrain. Other new features include greater traction, a myriad of new interior upgrades (including a Tesla-esque 11.6-inch display screen on the new Limited Trim), and new trim designations.

The 2019 Toyota Prius trims include the base L Eco model, LE, XLE, and Limited models, as well as the AWD-enabled LE AWD-e and XLE AWD-e models. Under the hood, all Prius models sport Toyota’s Hybrid Synergy Drive, which is composed of an automatic transmission, a 95-horsepower 1.8-liter 4-cylinder engine, and an electric motor. While no longer the fuel economy leader in its class, the Toyota Prius is still incredibly efficient and offers a host of features (namely AWD) available nowhere else in its category. For those who prioritize modern amenities and a smooth driving experience alongside outstanding fuel economy, the 2019 Prius is an excellent choice. 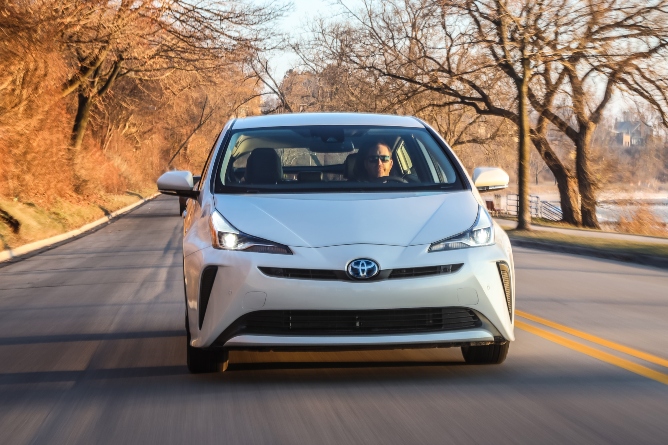 The 2019 Toyota Prius showcases and updated exterior featuring avant-garde lighting and futuristic lines, even though the appearance has arguably been toned down since its major 2016 revision – likely due to customer feedback. Not only that, but the 2019 Prius is also more substantial than past Prius models. At 15 feet long and just under 6 feet wide, it’s both longer and wider by several inches. The 2019 Prius is also lower to the ground, making it more aerodynamic and fuel-efficient. Its lower hood line also helps optimize driver visibility, improving safety overall. 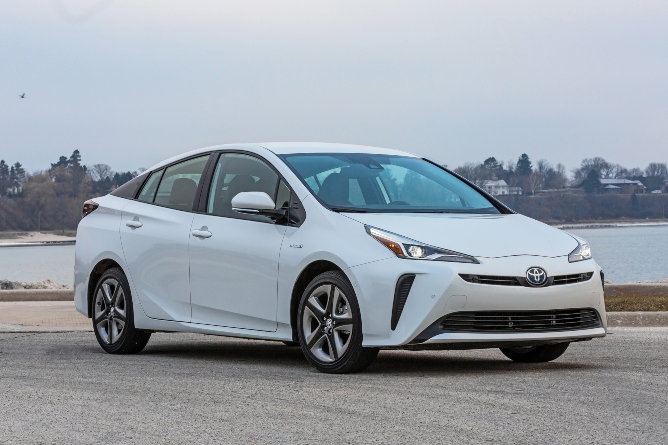 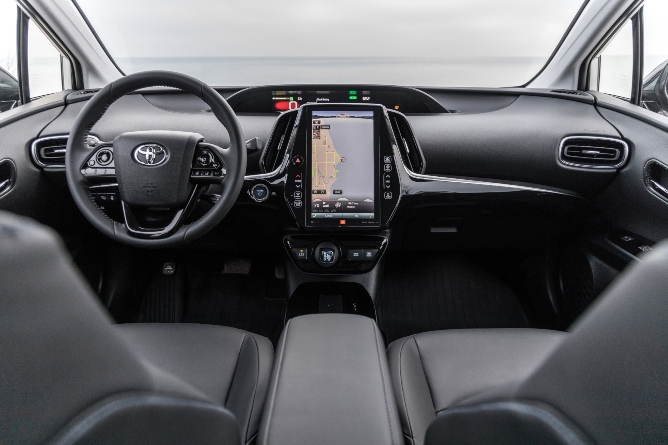 The dashboard layout in the 2019 Toyota Prius is both streamlined and intuitive. Buttons and switches have been repositioned, most close to a large center touchscreen — a development that may momentarily inconvenience long-time Prius drivers, but one that most reviewers agree is a vast improvement over earlier-year models. One of the many layout improvements is the positioning of the seat heater switches. On the 2019 Prius, they are now found directly in front of the cup holders —not behind the transmission shifter — improving accessibility vastly.

All 2019 Prius models feature two front and two rear cup holders, plus two front and two rear bottle holders. Each model also features a cargo area in the back (complete with covers in the LE and XLE models), though the LE and LE AWD-e models have less space. A power tilt/slide moonroof, equipped with a sliding sunshade, is available as part of an option package on Limited, XLE, and XLE AWD-e models. 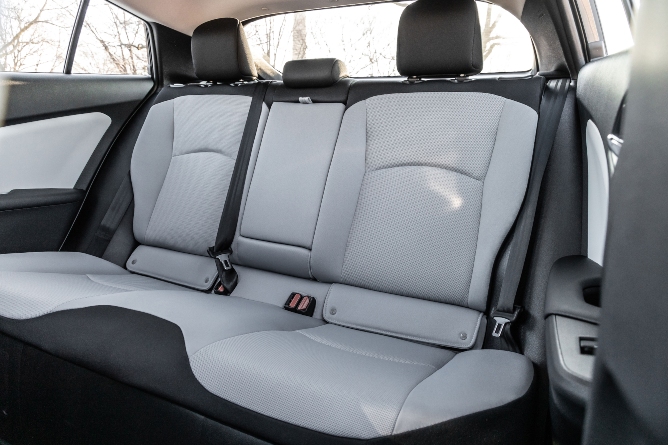 All 2019 Toyota Prius models are five-door hatchback models. Those looking for extra storage space can add available cargo cross bars. All models except the L-Eco feature a removable cargo area tonneau cover behind the rear seats. 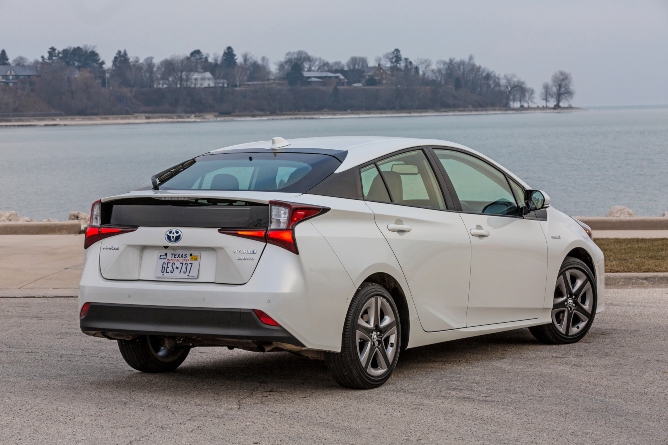 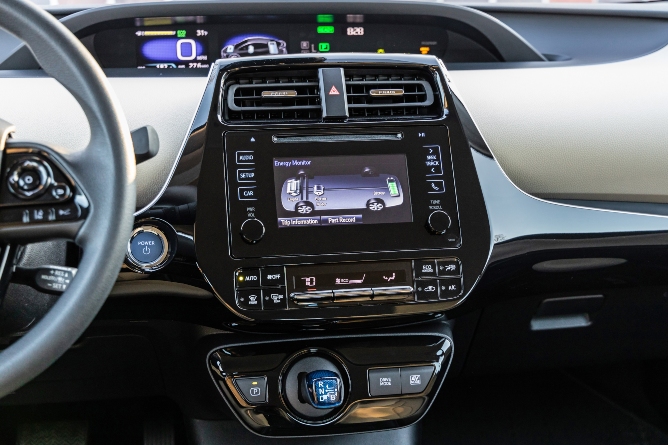 Though Toyota has mentioned that Apple CarPlay and Android Auto will be available soon, neither are available on the 2019 Toyota Prius to date.

Building on Toyota’s stellar safety reputation, the 2019 Toyota Prius earned a spot as a Top Safety Pick of 2019 from the Insurance Institute for Highway Safety (IIHS). Scoring “Good” ratings in all areas of Crashworthiness except in the Passenger-Side category (where it received an “Acceptable”), the 2019 Prius also received a rarely-awarded “Superior” score in Front Crash Prevention. It received a “Good” rating in the Child Seat Anchor (LATCH) Ease of Use category and an “Acceptable” rating in the Headlights category.

A 21st-century vehicle through and through, the 2019 Toyota Prius offers a myriad of active safety features to keep drivers and passengers protected on the road. These features include a driver and front passenger Advanced Airbag System, LATCH tethers for children passengers, and blind-spot monitoring with rear cross-traffic alert. All 2019 Prius models are equipped with an onboard Star Safety System that includes enhanced vehicle stability control, traction control (TRAC), electronic brake-force distribution, an anti-lock brake system (ABS), brake assist, and emergency braking with Smart Stop Technology® (SST).

Most reviewers rank the 2019 Toyota Prius among the quietest and most comfortable sedans to drive. While not a sports car by any stretch (its 0-to-60 time is a modest 10 seconds), the 2019 Prius handles surprisingly well. Its lower body profile helps it take corners better than its predecessors, while its low hood line also helps optimize driver visibility, improving safety overall. Steering is noted as light and precise on first impression, though not as responsive as that found in vehicles such as the Honda Civic and Mazda 3. (Though the Prius outstrips these vehicles in both fuel efficiency and AWD options.)

The quiet cabin of the 2019 Toyota Prius is due in large part to what’s under the hood. The traditional front-wheel-drive options for this industry-leading hybrid sedan are powered by Toyota’s Hybrid Synergy Drive, which consists of 95-horsepower 1.8-liter 4-cylinder engine (that feeds on gasoline), an automatic transmission, and an electric motor with a lithium-ion battery. For all four trims, this engine’s combined output is a to-be-expected 121 horsepower. But with the addition of the AWD-e system, buyers in this hybrid class have an unusual feature that Toyota seemingly hopes will lure some away from crossover SUVs.

The Prius AWD-e option combines the powertrain with an additional electric rear motor that powers the rear wheels of the Prius. Permanently engaged at speeds up to 6 miles per hour, the AWD option then moves to part-time mode, activating on the rear wheels only when it senses the wheel of the 2019 Prius start to slip. The extra electric motor in Prius AWD-e models adds 40 lb.-ft. of torque and 7 horsepower to the 2019 Prius. All Prius models run on regular-grade gasoline. As traditional hybrids, they are not plug-in cars.

Though not a luxury sedan, the 2019 Toyota Prius sits near the upper-middle of its class in terms of price. (However, most drivers find Prius price tags to be justifiable when the overall cost of gas is factored into lifetime vehicle expenses. Destination-included prices on the 2019 Toyota Prius range considerably based on the model. The base price starts around $24,700 for the Prius L Eco model to well over $33,000 for the top-of-the-line, full-featured Prius Limited. All-wheel drive model options add another $1,400 and $1,000 to the LE and XLE’s respective bottom lines, though most consider this a small price to pay for an AWD system that is unavailable on any other hybrid sedan.

2019 Toyota Prius pricing compares favorably against other similar-sized hybrid and plug-in competitors like the Honda Civic and Chevrolet Volt, as well as the larger hybrid sedans like the Honda Accord and Toyota’s own Camry. However, comparable 2019 new Prius models cost more than the lesser-equipped, entry-level Kia Niro and Hyundai Ioniq models – even if most buyers pick moderately optioned versions of each vehicle. Though Priuses and other Toyota vehicles are some of the best performers in the resale market, experts don’t expect the Prius to fare as well as Toyota’s other vehicles (such as the RAV4) as it ages. (This is due to in large part to the engine and powertrain, which may encounter expensive repairs after several hundred thousand miles.) All in all, the 2019 Toyota Prius is an excellent investment for anyone in search of a fuel-efficient hybrid sedan with modern features at an affordable price.