Powertrain: Underneath the hood of this high-level RAV4 lives a 2.5-liter Atkinson-cycle four cylinder gas engine producing 177 horsepower and 165 pound-foot of torque.

All power sources combined, the RAV4 produces an impressive 302 horsepower, making it the most powerful RAV4 ever.

Getting all of this plug-in hybrid power to the ground is Toyota’s on-demand all-wheel-drive, and electronically controlled Continuously Variable Transmission with sequential shift mode. 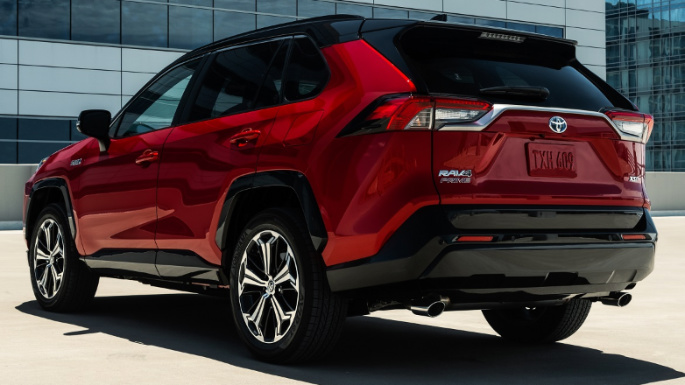 The 2021 Toyota RAV4 Prime hits the new car market with years and years of performance and hybrid development behind it. The Prime is at the absolute-peak of what is possible for the popular crossover platform, which has been a favorite among consumers and reviewers since its debut in 1994. It has been around for a while. It used to appear smaller than the Camry sedan, now it is significantly larger. Toyota has set out to make it one of the best combinations of what new car buyers are after: solid utility and cargo room, great performance, excellent fuel economy, and good safety and connectivity tech. That’s a tall order; have they succeeded? Let’s find out.

The new RAV4 Prime starts at $38,100 and tops out at $41,425 before options. It has just two trims, the SE and XSE. This is one of the most popular new car segments in the North American market, so the competition is particularly fierce: the Mazda CX-5, Honda CR-V, Subaru Forester, Volvo XC40, Ford Escape, and Chevrolet Equinox are just a few of its competitors, and all of which sell really well. 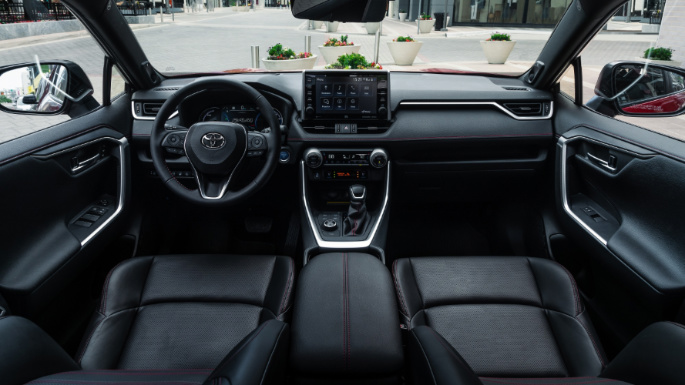 The 2021 RAV4 Prime has not yet been rated by the National Highway Traffic Safety Administration, or the Insurance Institute for Highway Safety. Though, the non-Prime 2020 RAV4 was rated a Top Pick by the latter, scoring “Good” across all testing categories. 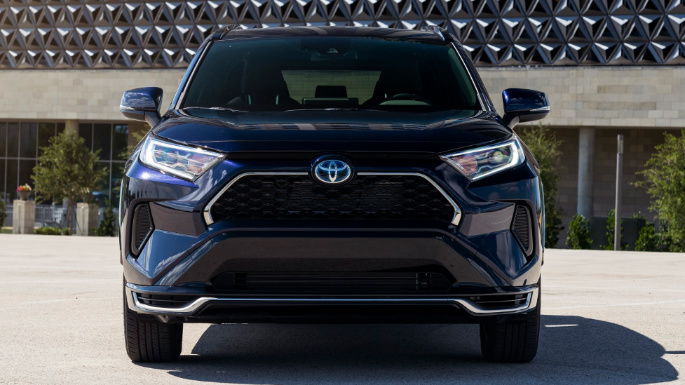 Compared to hybrid models by other manufacturers, the Toyota RAV4 Prime is significantly higher in price. The Ford Escape hybrid starts at $33,040, whereas its rival by Honda fetches an even lower price at $27,850. Though, it would be fair to say that they are not direct competitors with the Prime; they have significantly less power and performance, and are more a match for Toyota’s lesser-expensive crossover hybrid, the plainly-named Toyota RAV4 Hybrid. This one comes in between the Honda and Ford at $28,500.

This compact crossover is sort of in a league of its own compared to its American and Japanese rivals, due to its performance, amenities, and tech, all wrapped up in a hybrid package. We’d say it’ll be more of an even match with its competition across the pond: the forthcoming Volvo XC40 hybrid (pricing not yet available), and forthcoming Mercedes Benz GLA 250 hybrid (pricing also not yet available). 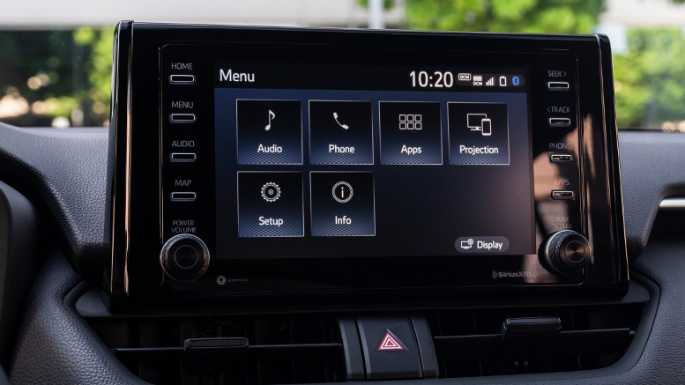 Like the RAV4 Prime’s safety features, its tech is a laundry list of modern amenities to stay competitive in this immensely competitive segment.

The XSE takes it a step further with Toyota’s Audio Plus features: a 9.0-in touchscreen, six speakers, one USB media port, four USB charge ports, hands-free phone capability and music streaming via Bluetooth, Apple CarPlay, Android Auto, and Amazon Alexa, and SiriusXM. Connected services include Safety Connect, Service Connect, and Remote Connect. These make emergency calls, staying on top of maintenance, and accessing the Prime via smartphone app a breeze.

Optional on the XSE trim is Toyota’s Premium Audio package, which includes dynamic navigation, and eleven JBL speakers with subwoofer and amplifier. 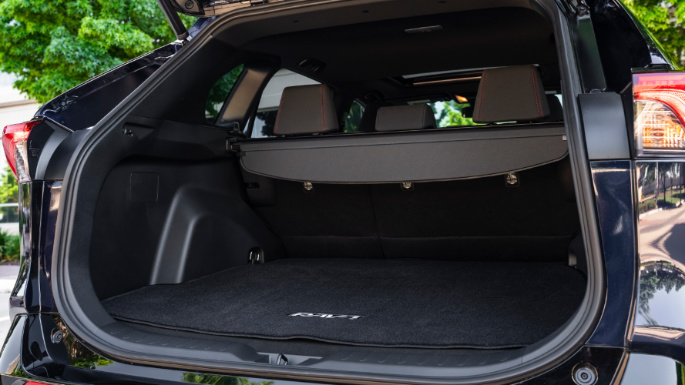 One of the biggest reasons for the crossover segment’s popularity is the amount of practicality consumers get in relatively-small packages. Toyota takes inspiration from some of its mid- and full-size SUVs by offering great cargo capacity in the RAV4 Prime.

Space-wise, the Toyota is generous with 37.7 inches of headroom up front (with moonroof) and 39.5 inches in the backseat. Leg room comes in at 41 inches up front and 37.8 inches in the rear, hip room finishes everything off at 54.3 inches up front and 47.7 in the back. Cargo space is even better: 33.4 cubic feet of space in the rear behind the second row seat, though when the seat is folded down, this expands to a truly-massive 63.1 cubic feet.

The RAV4 Prime’s versatility is good for its segment. Its tow capacity is 2500 pounds, and thanks to electronic on-demand AWD, it can power through the slipperiest of conditions without much issue. By comparison, the Honda CR-V and Ford Escape hybrid only manage 1500 pounds of tow capacity each. 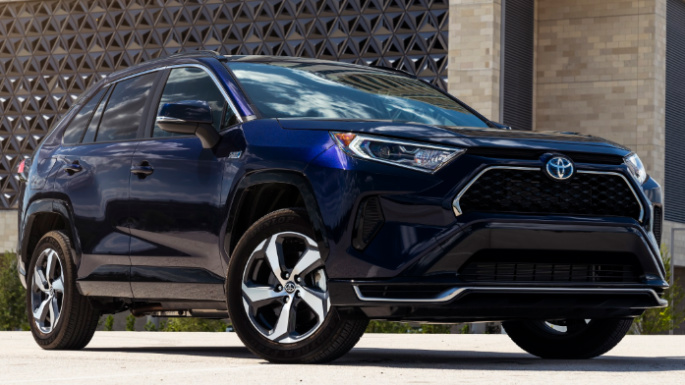 The RAV4 Prime follows Toyota design language well, and takes a few styling cues from its 4Runner, Sequoia, and Land Cruiser cousins. The pronounced front bumper, muscular quarter panels, and sharp, defined headlights give it a sporty appearance. Higher ground clearance makes it appear to not have much issue tackling off-road trails, even if it doesn’t have nearly as much off-road capability as the more off-road focused 4Runner or Land Cruiser.

Inside, the interior is a notable upgrade over previous-generation RAV4s. There’s a good amount of comfortable faux-leather throughout, with substantial-feeling buttons and pleasing accents. Dare we say it looks more Lexus than Toyota? 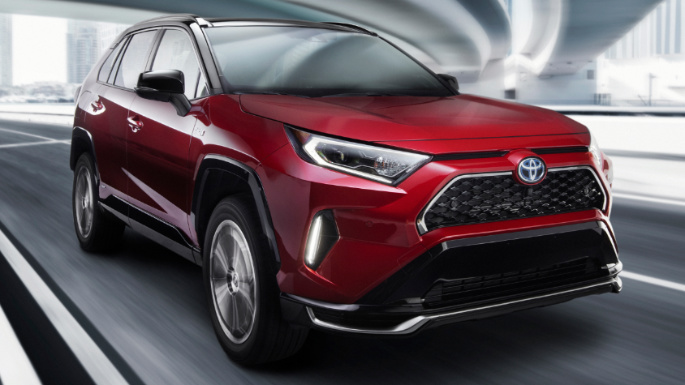 The Prime has three different electric modes, each having a different way of balancing its electric and gasoline-fed power. In Auto and HV hybrid modes, the gasoline engine provides extra power when drivers need it, such as a brisk highway merge or getting out of the way in traffic. EV Priority mode allows drivers to run on electric power only, with a battery recharge mode that utilizes the engine to recharge the battery, sort of like a modern train.

The Toyota RAV4 Prime XSE’s straight-line performance impressed reviewers. Hitting 60 MPH in just 5.4 seconds from a stop is eyebrow-raising by anyone’s standard, and downright impressive when it’s done by a 4300 pound crossover. This also makes it the quickest in the segment. It even beat out Toyota’s halo sports car, the Supra 2.0, in several acceleration tests: 5 MPH to 60 MPH, 30 MPH to 50 MPH, and 50 MPH to 70 MPH. It reaches the quarter mile in 14 seconds flat, which is faster than pretty much every high-horsepower hot hatch on the market. This certainly makes sense: 302 horses are nothing to sneeze at, especially when they’re combined with instant-torque from a pair of electric motors helping scoot the portly crossover along. Though, if modes are configured to only use electric power, it takes a whole 9.2 seconds to reach 60 MPH from a stop.

The Prime is impressive in a straight line, though underwhelming in the twists and under braking. Reviewers reported, during a first drive, that slamming on the brakes from 70 mph produced some concerning shuddering noises and vibrations. The Prime also has the largest brakes in the RAV4 lineup, though takes the longest to come to a stop. It took 195 feet for it to come to a halt from 70 MPH. On the skidpad, reviewers measured a lateral grip limit of just 0.75-gs. To get a sense of comparison, the regular RAV4 Hybrid achieved a significantly-grippier 0.81-gs. The Hybrid also came to a stop from 70 MPH in just 182 feet; significantly shorter than the Prime. While the Prime manages its portly 4400 pound weight well moving in a straight line, it doesn't do as much anywhere else.

The Prime also possesses a Continuously Variable Transmission, or CVT. This means there are no gears, but rather a series of belts and pulleys putting the power to the ground. The XSE offers paddle shifters on the steering wheel to change “gears,” though reviewers noted that they weren’t sure who would appreciate them on a CVT-equipped car that isn’t a sports car or sports sedan.

The RAV4 Prime’s showpiece is its fuel efficiency, with an MPG-e rating as high as 94. This is the rating given to its overall mileage when combining its hybrid and gasoline powertrains. This is good, though not as good as the Ford Escape’s 100 MPG-e, or 2021 Volvo XC40’s rumored, albeit immense, 141 MPG-e.

Otherwise, its sole-gasoline figures are very good for the segment as well: an EPA-rated 40 MPG city, 36 MPG highway, and 38 MPG combined. Its motors can power it for an electric range of 42 miles as well, making it a great urban neighborhood runabout or short-distance commuter. Common hybrid tech like regenerative braking help bump these figures.

It’s fossil-fuel-burning figures are right on the money with the competition: the Honda CR-V hybrid achieves 40 MPG city and 36 MPG highway, whereas the Ford Escape does a bit better at 44 MPG city and 37 MPG highway. Most of the rest of the RAV4’s hybrid SUV competition aren’t offered in a hybrid yet; good on these three for being ahead of the curve. Though, EV range could be better. 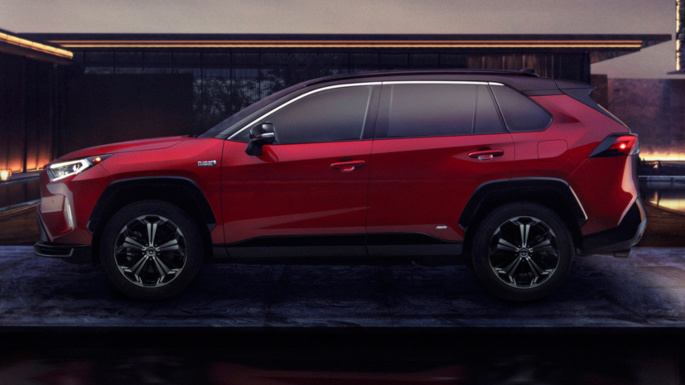 Despite having all kinds of base features, the RAV4 Prime only has two trim levels.

Starting off with SE trim, a base price of $39,220 comes equipped with an 8.0-inch infotainment touchscreen, heated and electronically-controlled cloth seats, a great selection of convenience and safety tech, and 18-inch wheels.

The 2021 Toyota RAV4 Prime is uncharted waters for the massive Japanese brand. They have created some significant performance vehicles, and have led the charge (pun intended) in hybrid technology development. This is the first time they have combined the two to make the most out of the most popular segment in the North American car market: a crossover that can haul as much, well, rear-end, as it can cargo, and return excellent fuel economy in the process. Especially considering it weighs in at a curb weight of 4300 pounds, which is more common territory for luxury sedans and mid-size SUVs.

While it competes with other hybrid crossovers, as we mentioned earlier it actually makes more sense competing with luxury crossovers from Europe. Comfortable leather interior, great performance, sharp looks; normally this is territory for Lexus to cover, but if Toyota is taking a stab at it, the RAV4 Prime is a great value. This also has us wondering what the Lexus platform-mate will be like.