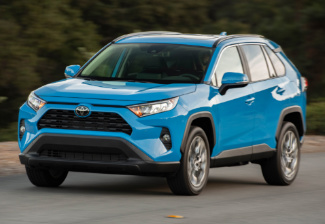 The latest Toyota RAV4 debuted for 2019. It migrated to a modern platform shared with many new Toyota passenger cars. The length decreased slightly, but the width was increased.

The 2.5-liter four-cylinder engine now produced 206 horsepower, while the RAV4 hybrid also increased in power to 219 horsepower; the Hybrid's fuel economy is rated at 41/38/40 MPG city/highway/combined. The CVT now mimicked a conventional automatic transmission with eight speeds to allow for better driver control.

All-wheel-drive models gained a controller for drivers to select a road surface so it would be better programmed to keep the vehicle moving. The Adventure model returned, as well.

This generation of RAV4 also saw introduction of the RAV4 Prime, a plug-in hybrid version of the crossover. It has a combined 302 horsepower from the 2.5-liter four-cylinder engine and an electric motor. It can travel 42 miles on electric power alone and has a fuel economy rating of 40/36/38 city/highway/combined.

For this generation of RAV4, Toyota also released the new Adventure, TRD Off-Road, and Limited trims.

With all of the upgrades, the RAV4 continues to be one of the best-selling vehicles in the U.S. every year. 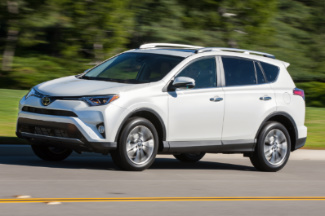 The RAV4 was made slightly more conventional for this generation over the previous gen.

The V6 and third-row seats were gone, even though the vehicle was somewhat longer than before. A four-cylinder and continuously variable transmission combo were made standard, however, increasing fuel efficiency. The spare tire was also mounted under the cargo floor, and a liftgate was added, a formula other compact SUVs had been using for years.

Toyota gave the RAV4 a facelift in 2015 for the 2016 model year. It streamlined the exterior styling, added more sound deadening inside for greater refinement, and added several other features.

For more efficiency, a hybrid variant also joined the RAV4 lineup for the first time in 2016. The standard 2.5-liter four-cylinder was paired with an electric motor, and another one to power the rear wheels if the all-wheel-drive option was selected.

Finally, a rugged-looking Adventure model was added for 2017, even if it wasn’t mechanically different from the standard models. 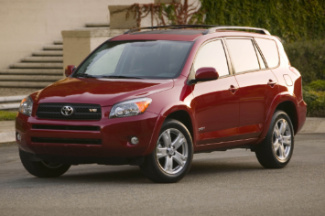 Giving customers more of what they wanted, Toyota significantly grew the RAV4 for 2007.

While a four-cylinder with slightly more power was still standard, a V6 was available for the first time, producing 268 horsepower – far more than anything else in the class. The vehicle itself grew 15 inches longer and even offered a third-row seat in some versions. Although its small size made it only usable for children, it folded into the cargo floor when not in use.

As before, front-wheel-drive was standard, with available all-wheel-drive. All models now received an automatic transmission.

This generation also spawned an electric-only variant in 2012. Through an agreement with Tesla, the RAV4 EV used a 37kWh battery pack with a range of around 100 miles. Select customers in California could lease it for $599 per month for three years. About 2,500 were produced. A spare tire and third-row seat were not available on the EV. 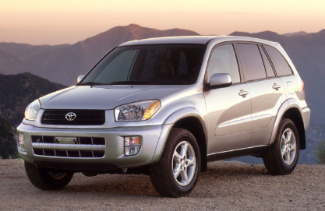 Capitalizing on the unexpected success of the RAV4, Toyota made the second generation bigger, which was released for 2002. Now only available as a five-door, the model gained about three inches in length, but also an inch and a half in width for better passenger space and cargo room.

It still used the swing door with the spare tire mounted on the outside.

Power also increased by about 20 horsepower. A five-speed manual was standard, but most buyers went for the optional four-speed automatic.

Later in this generation’s lifecycle, a 2.4-liter four-cylinder with 160 horsepower was added.

For the first time, a Sport Package was offered. It added cosmetic pieces like a faux hood scoop, silver accents, and special wheels. 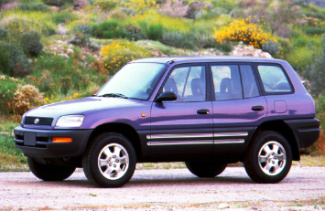 Toyota created a new niche when it released the RAV4 in the U.S. in 1996, merging the higher driving position and rugged style of an SUV, but the efficiency and comfort of a car.

Using the same platform as various Toyota sedans, the RAV4 featured a 2.0-liter four-cylinder engine with 120 horsepower and featured a five-speed manual as standard or an optional four-speed automatic.

A four-seat three-door version and a longer five-seat, five-door variant were the initial body styles, but a convertible model arrived in 1998.

Unusual for an SUV at the time, the RAV4 had standard front-wheel-drive, with optional all-wheel-drive.

All RAV4s came relatively well-equipped, with power windows, power locks, and power mirrors, and many came with air conditioning and alloy wheels.

One RAV4 characteristic that stuck for many years was the rear door that swung out instead of lifted up, along with the spare tire mounted on the door. But the model proved to be a success and encouraged competition like the Honda CR-V and Ford Escape.

The RAV4 EV was an all-electric model that was briefly offered to government fleets in 1997, then to the public in 2003. It used a 27kWh battery pack with a top speed of 85 mph and an estimated range of 95 miles.