Vehicle Type: The Toyota Sienna is a seven or eight-passenger minivan.

Powertrain: The Sienna is powered by a 3.5-liter V6 that makes 296 horsepower and 263 lb-ft of torque. That engine is paired with an eight-speed automatic transmission. 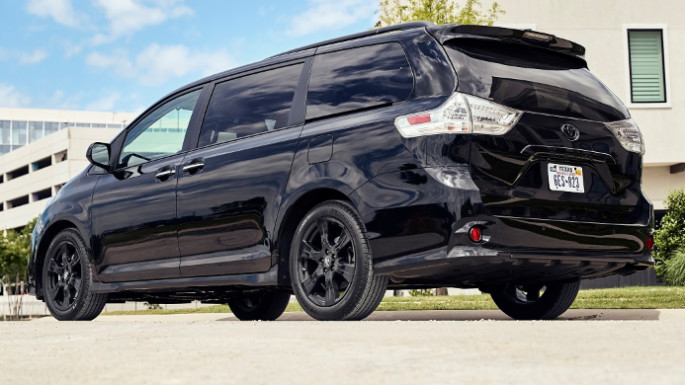 No SUV, pickup truck, or sedan can come close to providing the space and flexibility that minivans offer, and the Sienna’s available all-wheel drive makes it one of the most useful vans on the market.

Toyota has updated the Sienna over the years, but 2020 is the last model year of the current generation, which has been around since 2010.

The 2019 model got updates in the form of Apple CarPlay support and move to make all-wheel-drive standard for the SE and Limited trims. The 2020 model is mostly a carryover from the year before, but Toyota has added a new nightshade package to the Sienna line for this year. The appearance upgrade includes darker wheels and trim pieces.

The 2020 Toyota Sienna is targeted at new car buyers that need extra space and utility to haul a family and a load of gear around. The Sienna competes with the Chrysler Pacifica, Honda Odyssey, and Kia Sedona.

The Sienna is offered in five trims: L, LE, SE, XLE, and Limited. All-wheel drive is standard for SE, XLE, and Limited models and available for all but the L trim. The entire Sienna line is powered by a 296-hp 3.5-liter V6 that is mated to an eight-speed automatic transmission.

All-wheel-drive has been the Sienna’s main (optional) party trick for a long time now as it was the only minivan with the feature, but Chrysler announced that new versions of its Pacifica minivan will be offered with all-wheel drive going forward. The Pacifica is also offered as a plug-in hybrid, which significantly improves its fuel economy numbers.

A brand-new Sienna model has been announced and will debut later in 2020 as a 2021 model. It’s hybrid-only, and it will offer new features that Toyota has not offered in a minivan before, including a FridgeBox refrigerator, ToyotaVAC, a hybrid powertrain, and updated advanced safety features. Toyota has not released a solid on-sale date, but it’s expected to land sometime before the beginning of 2021. 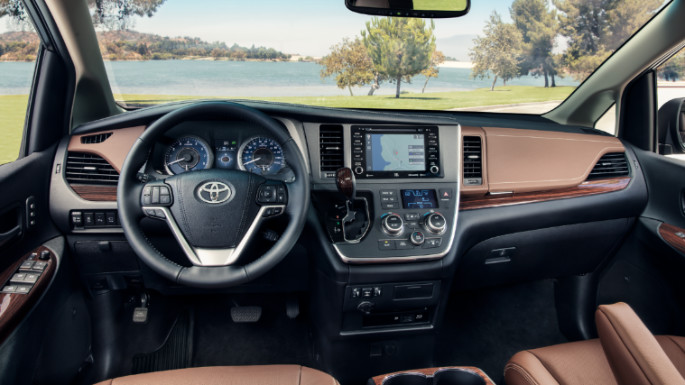 The Insurance Institute for Highway Safety gave the Sienna mixed ratings in crash tests. The minivan earned an Acceptable rating for small overlap front crashworthiness on the driver’s side and Marginal for the passenger side. The Sienna was rated as Good for other crashworthiness categories, except its headlights and LATCH system ease-of-use, which were both rated Acceptable. The standard Toyota Safety Sense system earned a Superior rating for its ability to prevent crashes.

Available safety equipment includes a birds-eye view camera, rear cross-traffic alerts, park assist sonar, blind-spot monitoring, and a driver’s easy-speak system that lets the driver communicate more easily with people in the back of the vehicle. 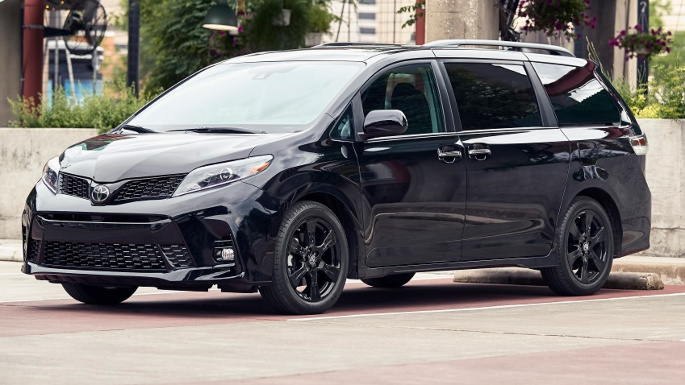 The 2020 Toyota Sienna is more expensive and less feature-rich than its competition.

Standard safety equipment and available all-wheel drive were previously big value draws for the Sienna, but the competition has updated their vans to the point that Toyota no longer has such an edge.

The base L model has plenty of creature comforts and standard safety features, but it misses out on many of the things that make the Sienna so useful, such as available captain’s chairs in the second row, push-button start, power sliding doors, and more. Buyers have to step up to at least the LE to get some features, and the SE trim to get the rest. That adds thousands to the Sienna’s price tag, which may put it out of reach for some buyers.

The Sienna has received solid reviews for its quality and reliability, which should make it more affordable to own over time. 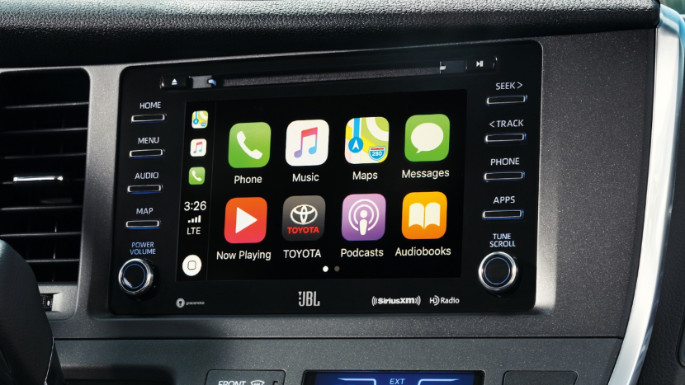 The Sienna loses points here, largely because its base model misses out on some of the best features that come standard just one level higher in the lineup.

Toyota’s Entune infotainment software can be clunky and difficult to use. Its darkened interface and sometimes small text are hard to read and make it awkward to find what you’re looking for while the vehicle is in motion. Connected apps allow smartphones to supplement the system with navigation and other features, but downloading and updating apps on two separate devices (car and phone) can be annoying and difficult to learn. 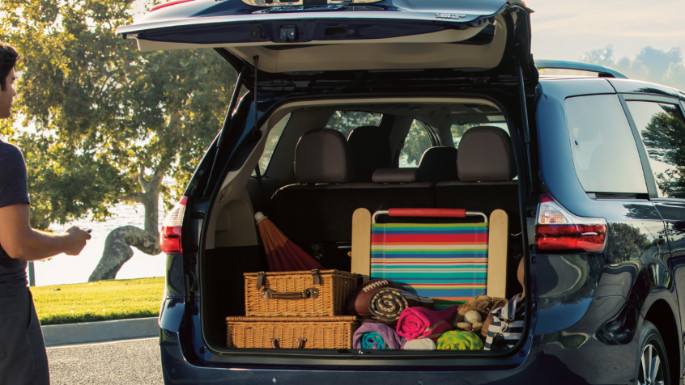 There’s almost nothing that can match up with a minivan from a usability and space perspective, and the Sienna’s no exception.

Inside, even the base L and LE trims offer superior space and the ability to carry several people and all of their gear. Higher trim levels are available with captain’s chairs in the second row, which makes moving around inside the cabin even easier, and can separate kids’ grabby hands from each other if necessary.

It may not be the most advanced minivan on the market, but the Sienna’s interior is full of useful and spacious cubbies, bins, and storage areas. The center console bin is spacious enough to fit a large purse as well.

In some trims, fold-away seats make it easy to open up the cabin space to haul larger items. The Sienna is a willing, and able companion for home improvement store runs and can carry much larger and longer items that it would appear from the outside. With all seats down, the Sienna opens up to a massive 150 cubic feet of space in the cargo area. 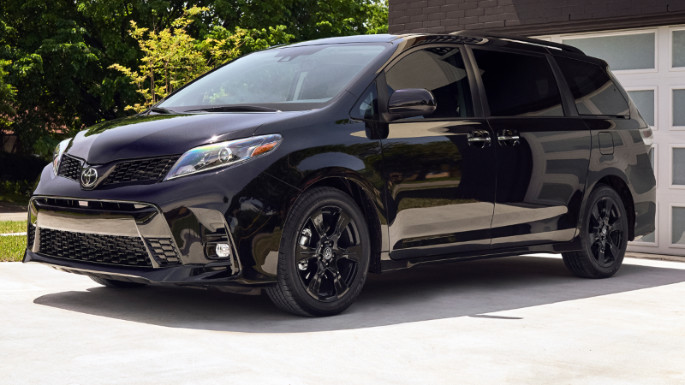 The Sienna is one of the more sharply styled minivans on the market, but it’s still got a family-friendly appearance that doesn’t color too far outside of the lines.

The new Nightshade edition darkens body trim and blacks out the wheels to make the Sienna look more aggressive and sportier, though it’s still absolutely a minivan in every way possible.

The front seats are supportive and well-padded, and the fact that each front passenger has their own fold-down armrest makes it even easier for people of all sizes to be comfortable.

When equipped, the second-row bucket seats are as comfortable and well-appointed as the front seats and offer enough room to fit large car seats.

The Sienna’s dash is crowded, and controls are bunched together, which can make it difficult to see and find the right button for the setting that you need. 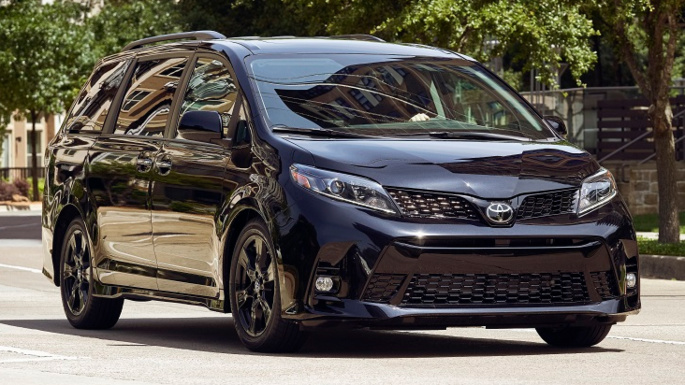 Minivans typically have a smoother ride than SUVs and crossovers, and the Sienna wows with its refined road manners and calm, confident handling.

The Sienna’s V6 makes it decently quick, with the ability to reach 60 mph from a standstill in under eight seconds. The engine and eight-speed transmission can be clunky and feel awkward when it’s cold out, but things smooth out considerably once everything is warmed up.

It’s a minivan, not a sports car, so there’s more body roll in corners than even a “normal” passenger car. The Sienna takes curves in stride, but the driver will need to slow down to keep the van in check for the tightest corners.

The Sienna SE is a bit sportier than the rest of the lineup, with a sport-tuned suspension, but there’s still a big gap between it and anything remotely resembling a performance vehicle.

Braking and steering are both predictable and confidence-inspiring. Brake pedal feel is soft, but braking performance is responsive and solid. 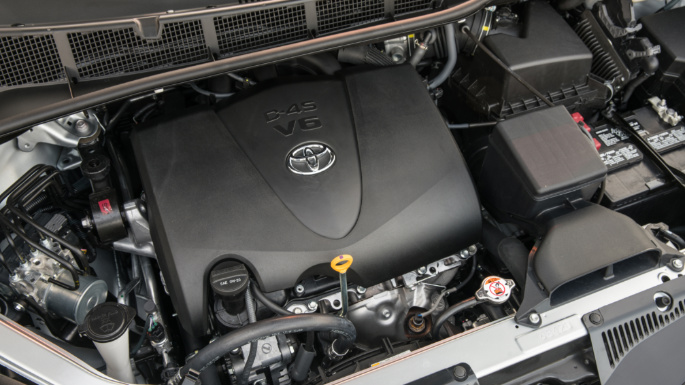 The Sienna aligns closely with other vans in the segment, mainly the Pacifica and Odyssey, and all rate better than the Kia Sedona. The Sienna does not have an available plug-in hybrid or hybrid powertrain, which gives the Pacifica an edge in most cases.

The Sienna’s fuel economy numbers aren’t as good as some of the newest crop of SUVs, many of which are available with hybrid powertrains. Then again, none of those vehicles can match up to the Sienna’s space and capabilities. 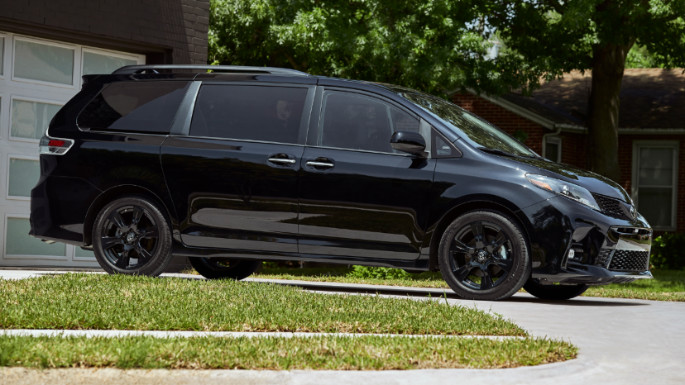 The Toyota Sienna XLE starts at $38,910 after destination and comes with second-row captain’s chairs for AWD models, power rear quarter windows, and a fixed center console with wood grain trim.

A Premium Package is available for the SE, XLE, and Limited trims. It adds extra features like a rear-seat Blu-Ray entertainment package and navigation for certain trim levels. The price differential can be steep, as the SE Premium Package costs $6,000 more than its “normal” SE counterpart.

Our pick would be the SE with Premium Package. The sportier suspension and long list of features at the SE level, plus the added features in the Premium Package, make it a compelling choice.

The Limited trim is interesting as well, especially as it’s not all that much more expensive than the SE Premium, but the extra “goodies” make the package worth a look. The Limited Premium is too expensive as a result.