Vehicle Type: A three-row crossover luxury SUV with seating for up to seven people.

Powertrain: A 3.5-liter V6 producing 290 horsepower and 267 lb-ft of torque, paired with a ten-speed automatic transmission and standard front-wheel-drive or optional all-wheel-drive.

A turbocharged 3.0-liter V6 with 355 horsepower and all-wheel-drive will be available at a later date.

After skipping the 2021 model year, Acura's flagship SUV, the MDX, got a complete overhaul for 2022. The popular three-row family carrier lands with a new style, a surprisingly upscale interior, and new tech.

One thing that didn't change from the previous generation, however, is the engine. It remains the same battle-tested 3.5-liter V6 that has powered the MDX for years and produces 290 horsepower. Here, though, it's paired with a new ten-speed automatic transmission that replaces the outgoing model's nine-speed.

For the first time, a performance model, the MDX Type S, will join the line in 2021. It will get a turbocharged, 3.0-liter V6 and 355 horsepower, along with various enhancements over the standard model.

The 2022 MDX is offered with packages instead of traditional trim levels. The vehicle can be ordered as a base MDX, with a Technology Package, the A-Spec Package, the Advance Package, and the Type S. The MDX is aimed at new car buyers wanting an upscale SUV with the latest tech at a more reasonable price than many premium brands can offer.

Though it's notably less expensive to start than most of those rivals, the new MDX carries many of the same comfort, safety, and luxury features that its pricier counterparts do. 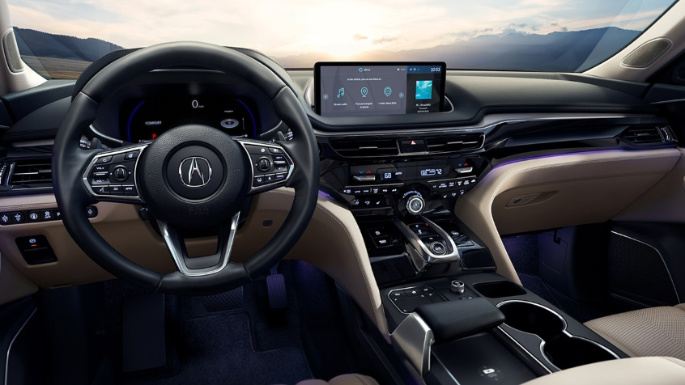 The 2022 Acura MDX earned a Top Safety Pick+ designation from the Insurance Institute for Highway Safety (IIHS). Thanks to its long list of standard driver assistance and safety features, the vehicle picked up Good scores in all crash-test categories and Superior scores in vehicle-to-vehicle and vehicle-to-pedestrian crash prevention. 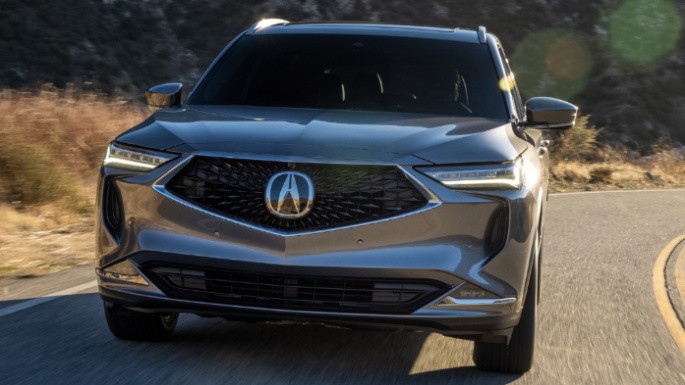 One of the things that Acura has always done well is offering feature-packed vehicles at a more reasonable price than its competitors. The MDX is an excellent example of this skill, as it's every bit as tech-focused and feature-packed as much more expensive models from BMW and Audi. On top of that, Acura's decision to group features into intuitive packages that function like trim levels is wise, as it gives buyers the ability to choose the MDX that fits their wants and needs.

The MDX's reasonable base pricing buys a roomy SUV with a large touchscreen, comfortable sport seats with leatherette upholstery, and more. It deftly combines a sporty driving experience with a family-friendly interior. It's got the comfort and easy-going nature that kids and parents need, but Acura injected enough driving excitement to keep the enthusiast mostly content.

Our money would buy an MDX with Technology Package for just over $53,000. The mid-range trim adds leather upholstery and an upgraded audio system without moving up to the top Advance model. Any MDX will offer a more upscale experience than a similarly sized Honda Pilot, let alone other close rivals like the Lexus RX and Volvo XC90. 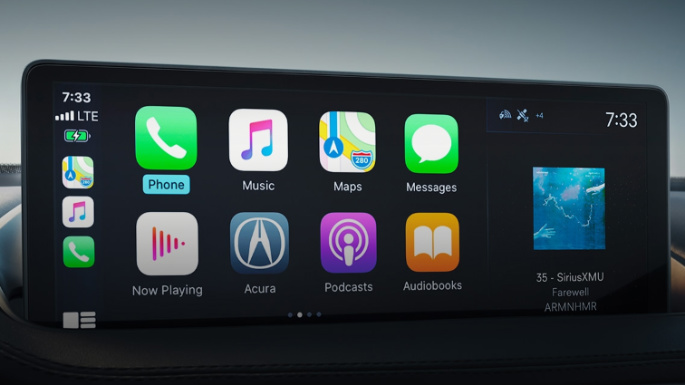 One rare misstep for the MDX is its infotainment system. The move to a single screen system is a welcome one, but there's still a touchpad to contend with, and it can be confusing at first. It's similar to the system used in the RDX and 2021 TLX, which also took time to learn. 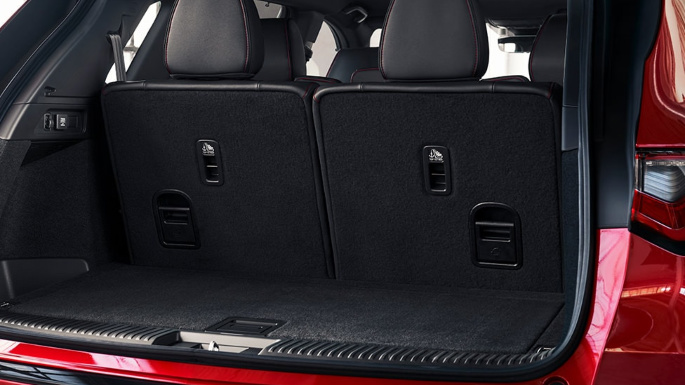 The MDX can carry several people and all of their gear, though the third-row seats are best reserved for children or smaller adults. That said, there are plenty of spaces for small-item storage to keep kids' gear and even larger items like purses and tablets safe on the drive. The second-row seats are comfortable and spacious, though, for a three-row SUV, the MDX's last row of seats is tight. And some rivals offer second-row captain's chairs and center console in place of the middle seat. The Acura does not.

The MDX offers 16.3 cubic feet of cargo space when all three rows of seating are upright. That number expands to 39.1 cubic feet with third-row seats down and grows further to 71.4 cubic feet with all seats folded down. Folding the seats can be annoying and a hassle, but the MDX is one of the more spacious vehicles in its class once they're down.

Acura's inclusion of standard safety and tech features makes the MDX much more approachable and usable in all of its forms. As a result, buyers get most of what they need, the features are easy to use and intuitive, and for the most part, everything is where it's expected to be. 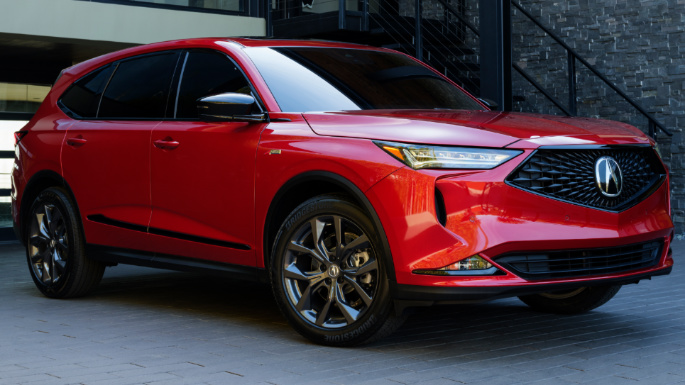 Styling updates made to the MDX for 2022 gave it a much more future-forward look, with smooth, sweeping lines accented by a sharp grille and lighting shape upfront. Sculpted sides and a clean rear help conceal the MDX's frumpy three-row size, and the overall look is sleek and powerful.

Inside, the cabin can feel slightly overwhelming at first. There are scores of buttons and controls presented to the driver, but they mostly become second nature to use after a few days of driving. Once past the sheer volume of functions, the front cabin area is designed handsomely, with a nice blend of gloss-black plastics, leathers, and metal trim.

Acura did a great job with the MDX's upholstery, adding visually appealing stitching patterns throughout the cabin. That's an area that brands like Genesis have excelled in, and Acura is showing that it knows how to make an interior feel special as well.

Outward is good in most directions, but the MDX's rear window shape can make some rear viewing angles a little tricky with all three rows of seats folded up. Even so, there's little worry of missing anything out of the front and side windows. 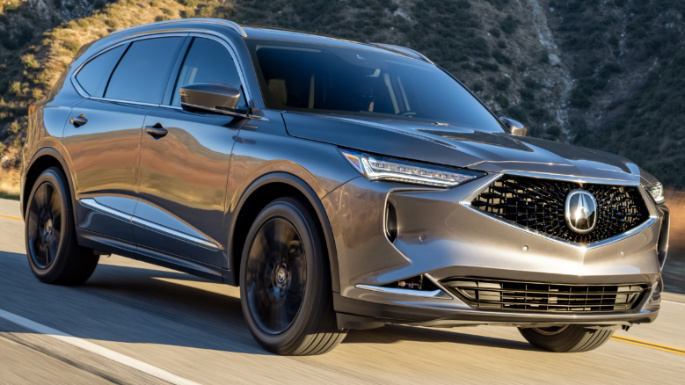 One thing that becomes immediately apparent from the start is that the MDX is a responsive vehicle. Throttle response, steering, and handling are all surprisingly direct for such a large vehicle. That's not to say that steering is communicative or that the MDX is quick, but neither of those factors impacts the driving experience in a meaningful or negative way. The Super-Handling All-Wheel-Drive (SH-AWD) system allows power to be moved between left and right wheels to aid traction.

The MDX isolates its passengers from the outside world. Road and wind noise are mitigated with sound deadening material, and even engine sounds are heavily muted from behind the wheel. As a result, the MDX has an almost Lexus or Lincoln- level of isolation from the outside world. Whether the performance-oriented Type S changes much of that is to be seen.

Ride and handling are a big part of the MDX experience, both in a positive way. The vehicle remains relatively flat and planted when the roads become curvy but is also supple and comfortable in most other driving situations. On the comfort-sportiness ride quality spectrum, the MDX tilts toward comfort, but not so much that it feels loose and sloppy. 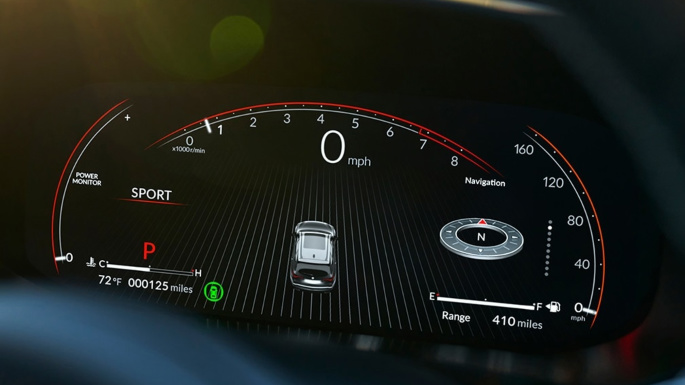 With front-wheel-drive, the 2022 MDX is EPA-estimated at 19/26/22 mpg city/highway/combined. Highway and combined estimates fall by one with the all-wheel-drive option. Type S models have not been rated yet by the EPA.

Those fuel economy numbers might be the MDX's weakest link. They are not impressive, especially in an age when many automakers are making hybrid and plug-in hybrid versions of even larger vehicles. The lack of a hybrid option is especially noteworthy given the last MDX offered that fuel-efficient powertrain. 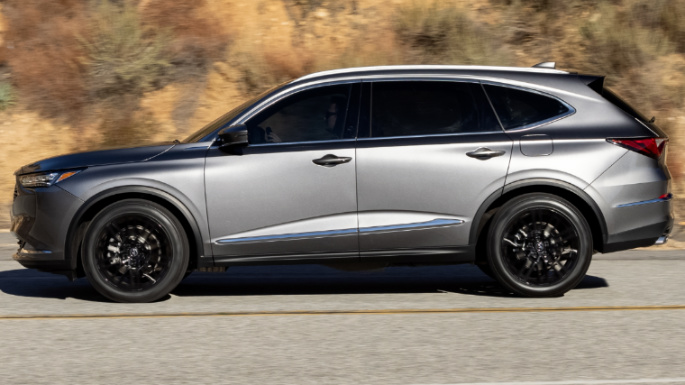 The $58,625 MDX with A-Spec Package comes with a 16-speaker ELS Studio 3D audio system, leather and suede upholstery, contrast stitching and piping, a leather-wrapped flat-bottom steering wheel, LED fog lights, and distinctive interior and exterior trim. Adding the A-Spec equipment group requires the addition of the Technology Package and includes the features from both packages.