Powertrain: A 272-horsepower, 2.0-liter turbocharged four-cylinder with a 10-speed automatic transmission and front-wheel-drive is standard. 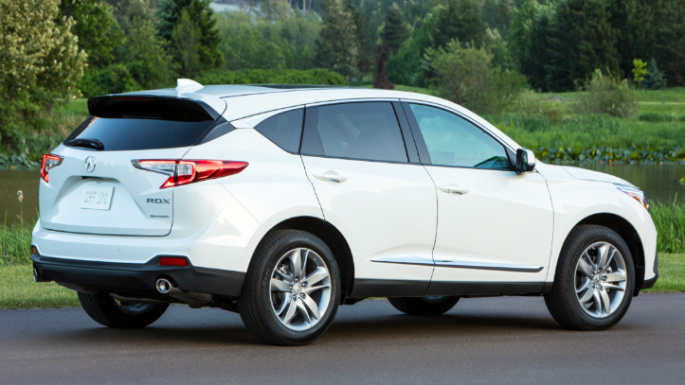 The 2020 Acura RDX competes in the hotly contested compact luxury crossover category by blending a premium interior and a sporty demeanor that aims to attract sports sedan buyers in search of all-weather capability and a more flexible interior. As one of Acura’s most popular models, the RDX has struck a balance between a refined driving experience and a practical and luxurious interior that makes it a highly regarded pick.

After a complete redesign for 2019 that ushered in a new platform, new engine and transmission, and a new infotainment system, changes for the 2020 RDX are limited to the addition of Platinum White as an exterior paint choice and the availability of Android Auto to the infotainment system beginning in November 2019. Models produced before that time received Android Auto as an over-the-air update.

The 2020 Acura RDX is available in four trim levels, all of which are available with all-wheel-drive. 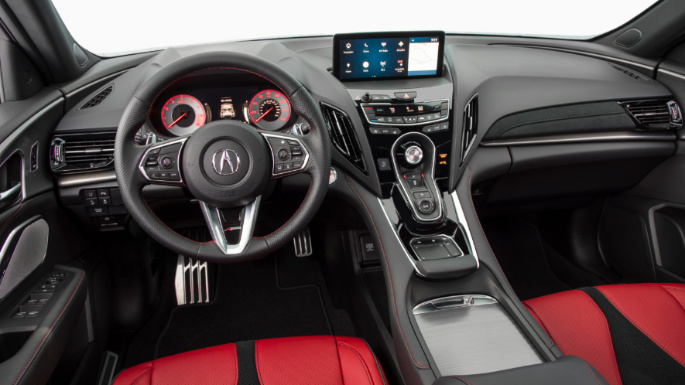 The 2020 Acura RDX was awarded the Top Safety Pick Plus rating from the Insurance Institute for Highway Safety (IIHS), the agency’s highest rating. Scores in all IIHS crash tests were high, with the RDX receiving the highest Superior rating in vehicle-to-vehicle crash prevention and the second-highest Advanced in vehicle-to-pedestrian crash prevention. The Acura received the highest rating from the National Highway Traffic Safety Administration (NHTSA), scoring five stars in overall tests.

Every RDX model gets the AcuraWatch suite of driver assistance systems, which include automatic emergency braking with forward-collision warning and pedestrian detection, adaptive cruise control, lane departure warning with lane-keep assist, and automatic high beam assist. All but the base model also get blind-spot monitoring, front and rear parking sensors, and rear cross-traffic alert. 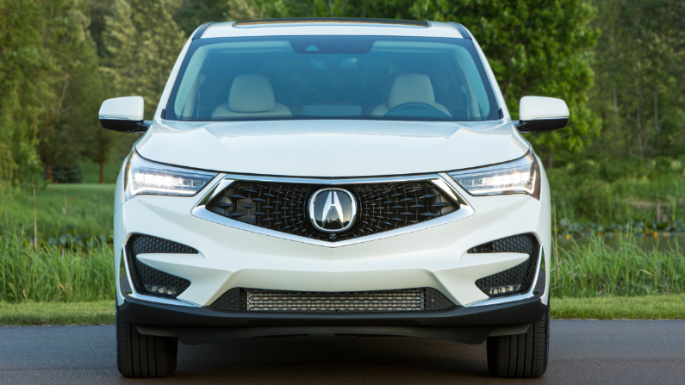 At just under $39,000, the RDX comes well-equipped for the class. A panoramic moonroof, 19-inch wheels, LED headlights and taillights, power heated front seats with power-adjustable lumbar support, dual-zone automatic climate control, and keyless entry with push-button start are all standard for a price that’s less than pretty much all of its rivals.

Acura’s rigid equipment list, however, means certain options require stepping up to a more expensive model that comes with many other features. Real leather upholstery, built-in navigation, blind-spot monitoring and parking sensors come only with the Technology Package or higher trims, which add at least $3,000 to the base price. Rain-sensing windshield wipers, a head-up display, and a surround-view camera are only available with the most expensive Advance Package. 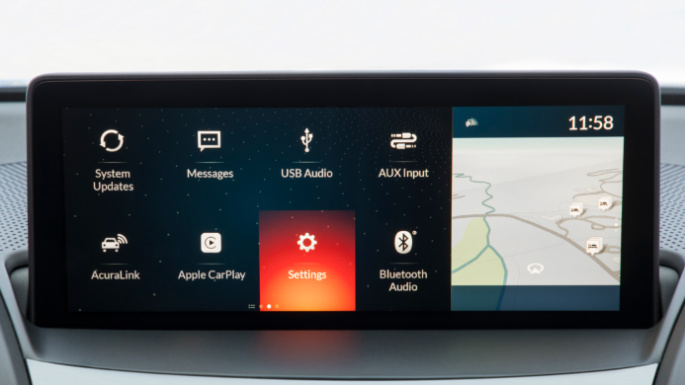 Acura’s new infotainment system comes standard on all RDX models. It uses a 10.2-inch screen mounted high on the dashboard, while the company’s True Touchpad Interface controller on the center console. The screen itself is bright and offers a split-screen to display different information at once. Apple CarPlay and Android Auto compatibility are standard, as is a 4G LTE hotspot, while built-in navigation comes on all but the base model.

Unfortunately, the screen itself isn’t a touchscreen as on many rivals, and the touchpad itself is tricky to use while driving. It’s easy to miss the icon you’re going after, forcing the driver to take their eyes off the road to perform some tasks, even though there are a few physical controls for audio and climate functions. But the touchscreen on an Audi Q5 or the knob controller on a BMW X3 are easier to use. 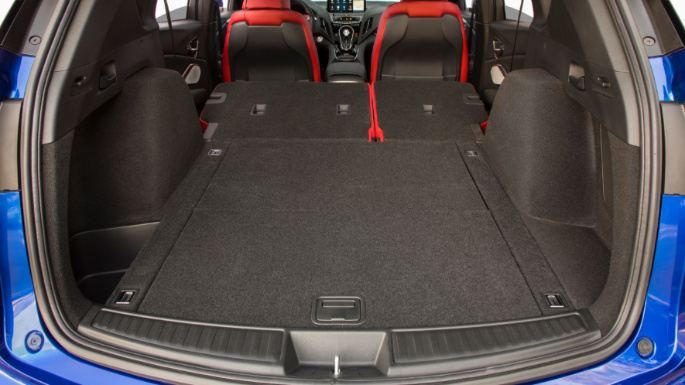 The RDX falls somewhere in the middle of its class when it comes to cargo space, offering slightly more than an Audi Q5 or BMW X3, less than a Jaguar F-Pace or Volvo XC60, and about the same as a Mercedes-Benz GLC. But it has more than enough space for four passengers and luggage, or two passengers and a full cargo area.

The Acura’s roofline doesn’t impede too much on the loading area, either. Standard 60/40 split-folding rear seats can be operated with levers mounted in the cargo area, but power-folding seats aren’t offered, and there’s no ski hatch or fold-down middle seat to make hauling long items and two rear passengers easier. At least space for back seat passengers is also competitive.

The RDX is rated to tow no more than 1,012 pounds when properly equipped, far less than most compact SUVs that can tow somewhere between 3,500 and 4,500 pounds. It’s also not much for off-road skills, like many compact luxury SUVs on the market. 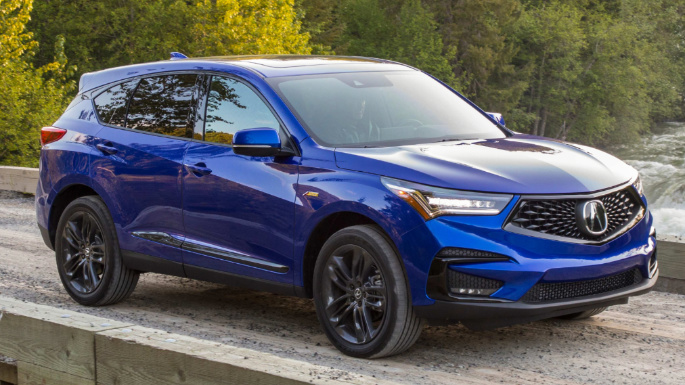 All RDX trims get large alloy wheels and Acura’s large new grille design that might divide opinion, but at least it’s distinctive when many SUVs have very similar profiles.

The A-Spec Package is mostly an appearance group that includes 20-inch, dark-painted alloy wheels, darker trim, and larger exhaust outlets. Despite its sporty pretensions, the Acura RDX doesn’t sacrifice too much practicality for styling, even if its shape isn’t as upright as a Land Rover’s.

The interior is made from generally high-quality materials, with leather upholstery on most models, thickly-bolstered front seats, and lots of soft-touch materials on the door panels and armrests. Some of the controls are more confusing than they should be, however. In addition to the infotainment system’s quirks, the volume knob for the radio is small and mounted high on the dashboard, and there are several look-alike buttons for climate control.

A lot of real estate is given to the large drive mode selector knob, which drivers may not adjust as much as volume or temperature. Also, the buttons to select gears might trip up some drivers at first, forcing users to pull a small switch backward for Reverse and push a round button for Drive and a small rectangle for Park.

Even though the interior is made of quality plastics and leather, it’s a little more sterile than rivals, coming off more like a high-end Honda than a luxury SUV. The gloss-black plastic on the dashboard gathers fingerprints quickly and feels a little thin. While current Acura customers will see it as an improvement over previous RDX iterations, it lacks the clean and sturdy look of an Audi or BMW interior, or the modern Scandinavian design of the Volvo. 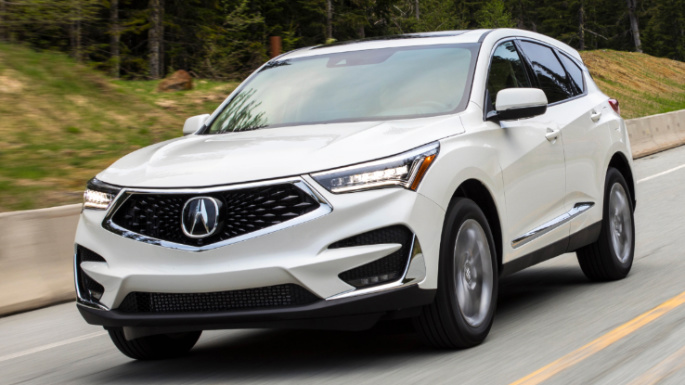 The RDX’s 272-horsepower turbo four-cylinder has more power than most rivals with their standard engines, giving it more thrust off the line. It even emits an exhaust sound, not unlike that of Acura’s NSX sports car, even if the sound is filtered through the audio system rather than entirely from the engine.

The Acura rarely feels like it needs more power, yet the 10-speed automatic transmission isn’t as smooth as rival eight-speed units and seems to exacerbate the turbocharged engine’s lumpen power delivery. At least the steering-wheel-mounted paddle shifters let the driver manually change down a gear or two.

The optional all-wheel-drive system is called Super Handling All-Wheel-Drive (SH-AWD), which makes a big play about how power can not only be automatically shifted between the front and rear wheels but between the left and right ones through a system called torque vectoring. This gives even more agility through corners than a traditional all-wheel-drive SUV. While most RDX drivers won’t see the full capability of the system, the vehicle has sharper and more confident handling than most of its rivals.

Most models ride on 19-inch wheels, while top Advance Package models get adaptive suspension dampers that continuously adjust to try and smooth out road perfections, as well as thicker side glass to smother out more outside noise.

On the standard setup, the RDX rides well and keeps road and tire noise to a minimum, but the A-Spec models with 20-inch wheels thump over bumps and generally have a firmer ride.

That said, the RDX strikes a respectable balance between the overtly sporty Alfa Romeo Stelvio and Jaguar F-Pace and the plush Infiniti QX50 and Lincoln Corsair. 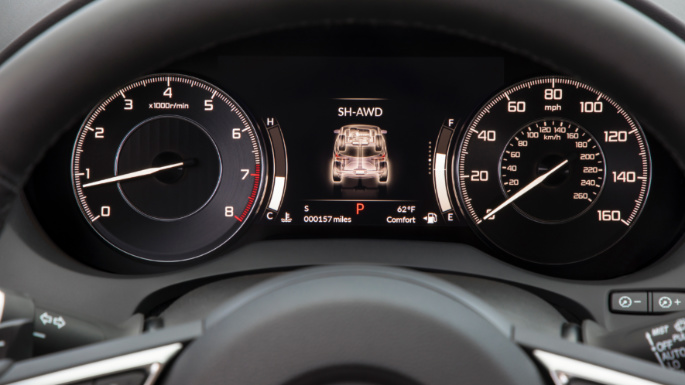 The Acura scores somewhat in the middle of similar vehicles in the EPA’s fuel economy tests, slightly bettered by the Alfa Romeo Stelvio, Infiniti QX50, and Lexus NX 300, but not so much that it’s likely to make a difference considering the RDX has more standard horsepower than most of those models. Where it stumbles is in the lack of a hybrid version to compete with the hybrid Lexus NX 300h, as well as the plug-in hybrid Audi Q5, BMW X3, Mercedes-Benz GLC, and Volvo XC60. 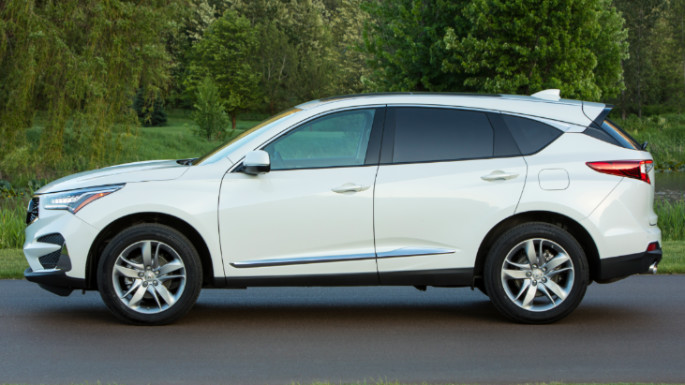