Acura is a luxury brand with a lineup that hasn't felt unique or luxurious for many years. However, the design renaissance within Acura, starting with the 2021 TLX sedan and 2022 MDX SUV, is quickly changing that impression.

Unchanged for 2022, the TLX has road presence, intense attention to detail, and genuine performance capability that lifts it significantly above Honda models at a reasonable premium.

We tested an Acura TLX Type S—an impressionable name last seen in 2008—on the road and the race track. 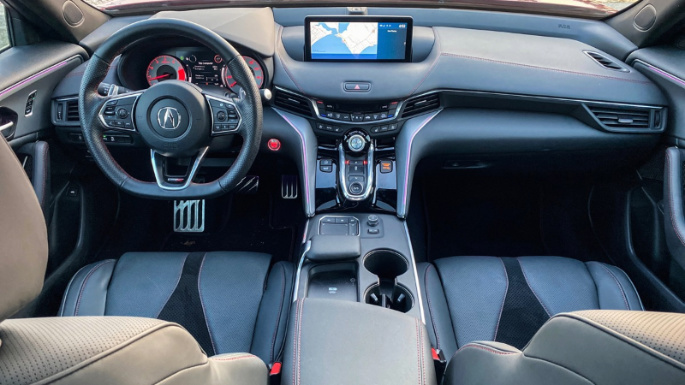 The TLX has the wide and long stance of a luxury sedan that's a size class larger. The 1990s Pontiac slogan "Wider is Better" applies to this Acura. It's positively big. Compared to the class leader in sales, the BMW 3 Series, the TLX is more than three inches wider, with all four wheels stretched as far outboard to the fenders as physically possible. The track width (from wheel hub to wheel hub) is nearly three inches wider out back and almost two inches up front.

Now add the visuals—thin headlights pressed against a five-sided grille, a front bumper making V-shaped curves like on a fit person's waist, large tailpipes at each side—and out spits a big-body sedan. It's nine inches longer than a 3 Series, with most of that extra mass on the low-slung hood. Acura has made a substantial vehicle without much fuss. The L-shaped running lights and starburst effect on the grille are the only concessions to current trends.

The Type S adds an exclusive gold paint color—Tiger Eye Pearl—that's not like what you'll see on the other Acura sedans you'll find in the suburbs. Our car's Performance Red Pearl positively glowed and set the stage for the rear diffuser, chin spoiler extensions, grille, and trunk spoiler—all in a polished black. The 20-inch Y-spoke gray wheels, inspired by the Acura NSX, are a must-have and let the fiery red brake calipers pierce through the open design (the standard 20s have one too many spokes).

Ordering a TLX A-Spec brings most of this extra flair, including the blackout window trim, but only the Type S has the four fat exhaust pipes. Less obvious are the outer front air intakes. On the other trims, they're blocked off and have a small vertical slit to let some air into the wheel wells for a more efficient wind stream. On the Type S, they're fully open to cool an additional radiator and the larger brakes. To keep this hardware extra cool, Acura deleted the front fog lights.

Despite the voluptuous body, the TLX is very much a compact sedan inside. It's snug. The detailing is impressive, including in the lower trims. The colors and shapes, especially the narrow center console with the silver drive mode dial, angled air vents, and inward curves on the aluminum trim, contrast against the wide center console and dash.

Upper trims with the Advance package embed thin LED strips against light matte wood for a Scandinavian airport lounge vibe (there are 27 total lighting colors). Surfaces are soft, finely grained, and fit is great. The widescreen infotainment sits far away on its dash-top island because it's not a touchscreen (more on that later). The overall impression is that your money is well-spent.

On Type S models, faux-suede inserts and red stitching cover the seats and the steering wheel has a flat bottom—with real metal shift paddles. Kudos to the Acura design team for offering a creamy white leather for the Type S with black suede stripes or, on A-Spec models, the option to pair bright blue paint with flaming red leather. This kind of daring can't be found at Audi, Lexus, Infiniti, or even Jaguar. 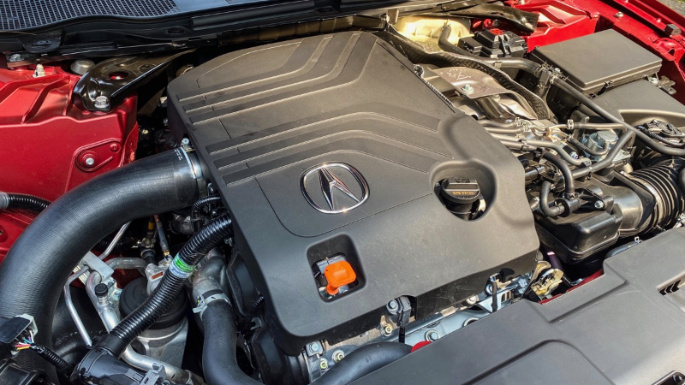 All TLX models can hustle. Plenty of automakers make a turbocharged inline-four, but few of these engines are worthy of luxury cars. Acura benefits from parent Honda's decades of powertrain expertise. The TLX runs smooth, pulls hard, and has no trouble getting out of its own way. This 2.0-liter engine makes 272 horsepower and 280 pound-feet of torque, and is paired to a 10-speed automatic transmission that shifts quickly and picks the right gear in any driving mode.

The TLX is a front-wheel drive (FWD) car to start, but spend the extra $2000 for Super Handling-All Wheel Drive (SH-AWD). This system, which Acura introduced more than 15 years ago, can vary torque at either rear wheel in an instant, before the tires begin to slip.

It's a special rear axle that overdrives the outside wheel in a corner—making it spin faster—which improves stability and handling precision. Many automakers, including Porsche, achieve a similar effect by braking the inner wheel around turns—but this shortens brake life and doesn't actively distribute torque.

In an Acura, the rear axle can preemptively shift all torque to that outside tire. In everyday driving, you won't notice it. But take a tight turn too fast and you'll be thankful. On the track, SH-AWD shines, especially with the 3.0-liter turbo V6 in the Type S that makes 355 hp and 354 lb-ft of torque, the latter at just 1,400 rpm.

After a few laps at Palmer Motorsports Park—a 2.3-mile members-only circuit in Massachusetts where the wheels are always pointed at a corner—it's obvious the TLX was developed on a track.

The double-wishbone front suspension, which is a complex setup used by expensive sports cars, keeps the Pirelli P Zero summer tires planted in the hardest of corners. That consistent grip, along with adaptive dampers and a helpful push from the SH-AWD—it sharpens the rear end's rotation into a corner—make the TLX balanced and predictable.

The engine's broad torque, minimal turbo lag, and the Sport+ driving mode make for a fun dance partner. The steering exhibits decent road feel and the Brembo front brakes bite hard, lap after lap. The only problem, if you can call it that, is the subdued exhaust note. The Type S has an active exhaust that exhibits a deep bark at startup and a few snorts when upshifting, but it's still too quiet and reserved in our opinion. Most people are not like us, though. Most people will prefer Acura's setup.

The regular TLX is more softly sprung and doesn't feel like a sport sedan. It accelerates and brakes just fine—the braking system is electronically actuated and derived from the NSX—but the Type S puts the proper polish on this chassis. The best part? The Type S doesn't give up any comfort or fall apart on the road like the more aggressive German sedans. The worst part falls squarely on its summer P Zero tires, which emit extra noise on the highway. All-seasons come standard. 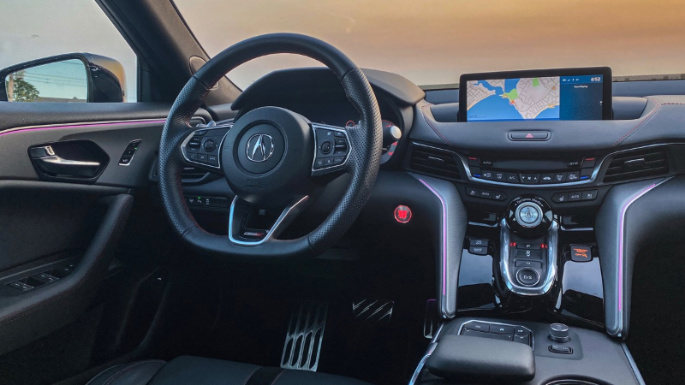 As large as it appears outside, the TLX is tight for four inside. The back seat at least benefits from decent headroom (there is no option for a panoramic moonroof, which eats into a car's roof) but suffers in legroom. The wheelbase is less than an inch longer than a 3 Series. Up front, it's all-day comfortable. The seats on the Type S have a thigh extension and adjustable side bolsters that squeeze your torso. The driving position is low and controls are well-marked.

What takes some acclimation is Acura's touchpad interface for the infotainment system. It's not a cursor trackpad like in a Lexus or the haptic trackpad in a Mercedes. The selection on screen only highlights the exact part of the touchpad you touch, and only as long as you touch it. So if you'd like to adjust the stereo, you need to touch and hold your finger until the stereo settings icon turns red, tap it, and repeat this process for each menu. It's not easy at first, and we wish Acura went with a touchscreen instead of developing an entirely new method. But it becomes easier with more practice.

It's the same deal with the pushbutton, pull-tab gear selector that flows like a wave on the center console. It's fine—but only after you've developed a new muscle memory.

The climate control is straightforward, and despite the touchpad's wonkiness, there aren't too many settings to adjust in the infotainment.

Trunk space is mediocre, at 13.5 cubic feet. A Honda Civic has more luggage space. Considering the size of the body, Acura could have devoted more space to the trunk or the cabin—but then again, it might not have fit the double-wishbone suspension which eats up more space than a conventional setup. 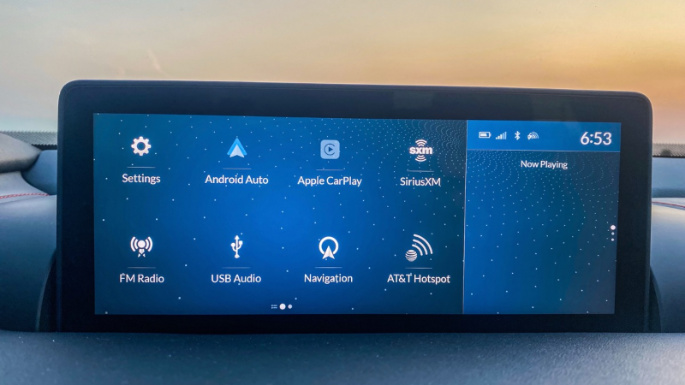 It's a good thing the infotainment interface is simple and quick, but many of the typefaces that describe certain settings or radio stations are too small to decipher. The same goes for the central display in the instrument panel, which has very small type in the trip info and some other menus.

The TLX has a great head-up display, which let the driver interact with the stereo, navigation, driver assists, phone, and other functions right from the steering wheel. Oddly, only available on the TLX with the Advance Package, and not the Type S.

More items are restricted to the Advance Package, like the 360-degree cameras, heated rear seats, and heated steering wheel. That's annoying, especially when the Type S is the most expensive trim. But the ELS Studio audio system with 17 speakers (including four on the roof that can be adjusted separately) is included, and it's a good system. Quick and accurate voice recognition is standard, along with Apple CarPlay, Android Auto, SiriusXM, and 12-way heated front seats.

With the Technology Package, Acura links the climate control to the navigation so it can automatically adjust the air to the sun's position in the sky and calculate its intensity from a light sensor. The spiffy "Jewel Eye" LED headlights and "chicane" running lights come standard, along with things that BMW and others still charge extra (like a garage door opener and auto-dimming rearview mirror). A full suite of driver assistance features called AcuraWatch comes standard and can steer the TLX on marked highways for semi-automated control. 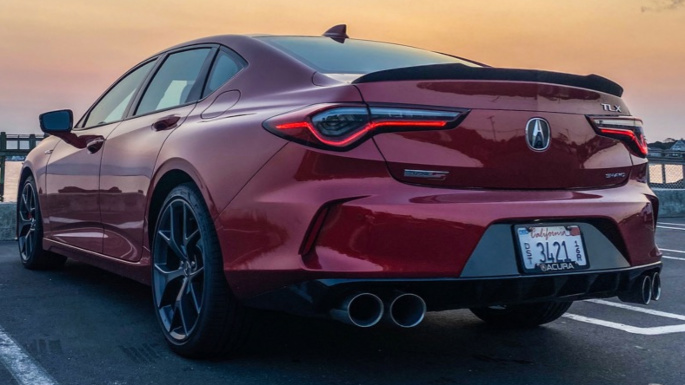 The TLX, starting with the 2021 model year, is rated a Top Safety Pick+ by the Insurance Institute for Highway Safety (IIHS), which means it scored the top "Good" rating in all six crash tests, for headlight visibility and anti-glare, and the response of its standard forward automatic emergency braking with pedestrian detection.

The National Highway Traffic Safety Administration (NHTSA) gave the TLX a five-star overall score, with five stars in most crash test except the frontal passenger-side test, where the TLX received four stars.

Knee airbags for driver and passenger are standard, along with a unique Honda-engineered passenger airbag that claims to better reduce head injuries. Lane-keep assist, adaptive cruise control, auto high beams, and traffic-sign recognition are standard. Blind-spot monitoring, rear cross-traffic alert, and parking sensors are included on the Technology Package and all higher trims.

Acura hasn't released pricing for the 2022 TLX, but the 2021 model starts at $37,500 and tops out at $53,600 with all factory options. That's a reasonable ask and many thousands below where Audi, BMW, and Mercedes-Benz begin.

The Infiniti Q50 is old and bad, the refreshed Lexus IS is good but not great, the Cadillac CT5 has a low-rent interior despite an incredible powertrain and chassis, and the Jaguar XF is getting boring and pricey.

That means a TLX is a good value, but how much depends on whether you prefer a Genesis G70. We like that car a lot. For everything Acura has delivered with the new TLX—and the promises it fulfills with the hot Type S—we can recommend this car over many of its competitors.