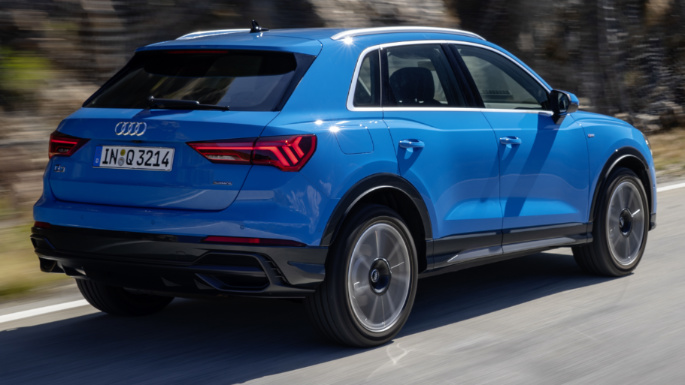 The 2020 Audi Q3 is part of the growing compact luxury SUV segment that consists of models taking the format of a small utility vehicle and adding more premium features, performance, and comfort.

The Q3 was redesigned for 2019, sharing some mechanical components with the A3 sedan. It grew larger inside and out and featured new technology. There are no notable changes for 2020.

It's the smallest crossover in Audi's lineup, slotting below the larger Q5, Q7, and Q8, as well as their S and RS variants.

TL;DR The Q3 looks like a scaled-down Audi SUV, and that's no bad thing. 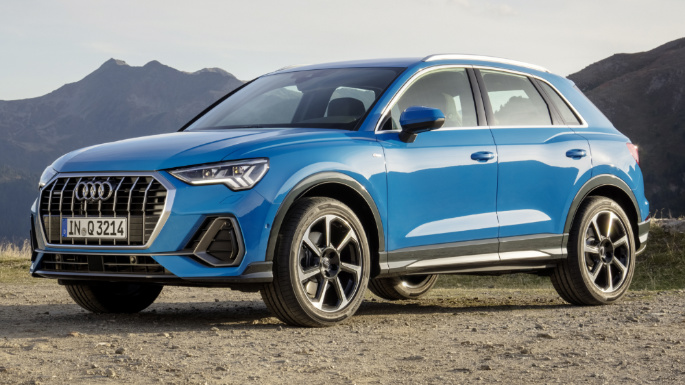 Audi fans will likely find a lot to like with the 2020 Q3's styling. That may have something to do with the fact the family resemblance is apparent from the first glance.

The Q3 has an unmistakable profile for anyone who's spent a lot of time looking at a Q5 or Q7, Audi's larger SUVs. A prominent grille that extends well into the front bumper dominates the front of the Q3, flanked by LED headlights that are standard across the line. The rear also shares similarities with its fellow SUVs, along with LED taillights and scrolling turn signals.

It's at the side where the lower Q3 looks more like the A4 and A6 Allroad wagons, or even more like a compact hatchback. That's typical for this class of vehicle that doesn't prioritize ride height and ground clearance as much as others. But even the relatively style-conscious Land Rover Range Rover Evoque and Volvo XC40 appear taller than the Audi, and more like traditional SUVs.

Those looking for a more aggressive or distinctive look should consider the S Line models, an appearance package that consists of either 19 or 20-inch wheels and other visual changes such as revised bumpers and trim. It's available for base Premium and Premium Plus trims and standard on the top Prestige model.

TL;DR Modern design with an emphasis on technology makes for an eye-catching interior. 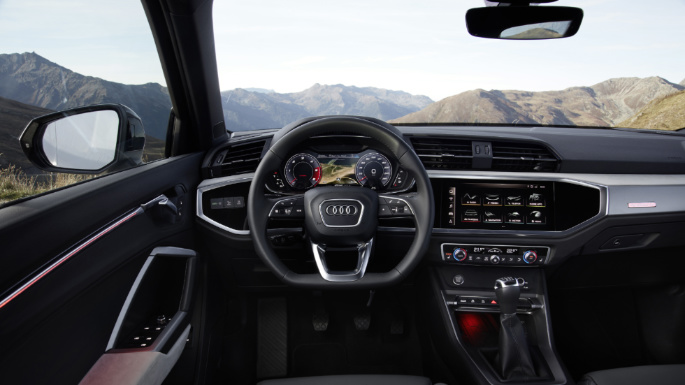 The Q3 tries to move past its entry-level SUV status through design, and it mostly works.

Every model gets a touchscreen infotainment system, known as the Multimedia Interface (MMI), ranging in size from 8.8 inches up to 10.1. The instruments in front of the driver are bright, clear, and ultimately straightforward to use. Still, if you want to be dazzled, the optional 12.3-inch all-digital display will give numerous ways to see essential information, such as speed, and the multimedia features such as audio information and navigation map. For the more analog-type people, however, there are physical controls for the climate controls and heated seats.

Even so, most reviewers found the controls easy to use once all of the menus and submenus and extensive vehicle settings are navigated – again, typical of the class. And the design of the dash with large swaths of aluminum or wood looks expensive and similar to larger Audi models. S Line models can even be equipped with somewhat garish orange faux suede (Alcantara) on the dash and door panels for a splash of color. Among compact luxury SUVs, the Q3 stands near or at the top of the class for interior design. 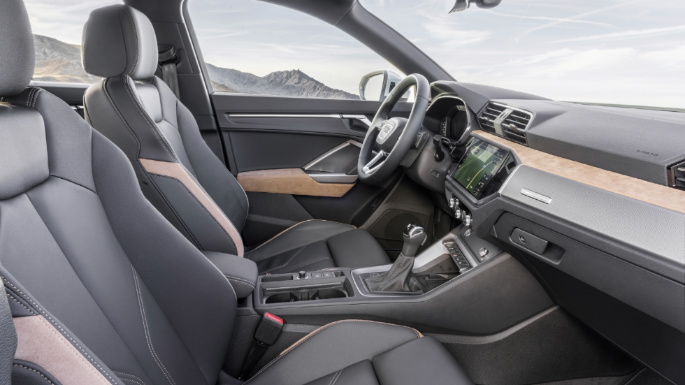 All Q3s get standard leather upholstery and power front seats, but some less-rich feeling plastics lower on the center console and doors reveal the Q3 as one of Audi's less-expensive products. The Lexus NX is somewhat better in this regard, but all of the Q3's rivals suffer from being near or at the bottom of their respective company's hierarchy. Still, the Audi's modern interior styling may sway buyers who like a more minimalist environment.

TL;DR Shape lends itself to useful cargo space, even if passenger space is still, well, compact. 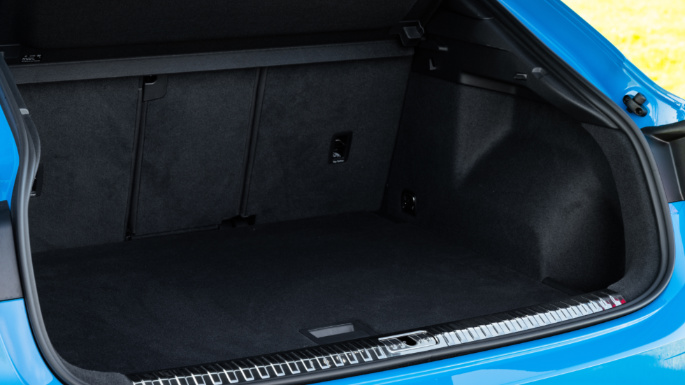 The Q3 grew considerably with its 2019 redesign, and that allows for more room for people and cargo, giving the Audi some versatility credibility in this crowd that tends to favor style over practicality.

The Q3's 23.7 cubic feet of space with the 40/20/40 split-folding rear seat up bests that of the Lexus NX, Mini Countryman, and nearly all of its main competition – including the square-shaped Mercedes GLB. Only the slightly larger BMW X1 has more space than the Audi Q3, but the odd bag or box likely separates it. While the sloping rear window cuts into some space, unlike the BMW, Mercedes, or Mini, the Q3's cargo area has a relatively square opening to make fitting large items easier.

Passenger space grew, too, and the Q3 has a reasonably airy cabin with the standard panoramic sunroof to add more light into what is a roomy cabin for four. Front passengers have decently ample space and headroom for all is average for the class, even if it isn't any better than what most sedans of this size have.

Still, space for three will be tight, especially if there are car seats mounted. And while headroom and legroom increased over the last-generation Q3, it's still tighter than you'd find in a Volvo XC40 or the Mercedes-Benz GLB-Class. Kids should be fine and adults for short trips, but if you regularly carry four full-sized people, a compact SUV like the Q3 may not be the best solution. And those interested in bringing more kids might be interested in checking out the Mercedes GLB, which is the only car of this class to offer a third-row seat, however tiny it may be.

As far as practicality goes, however, the Q3 is still a well-rounded vehicle for singles or small families who also don't want something too big for city traffic.

TL;DR Technology is mostly well-reasoned, but getting the most out of it gets expensive. 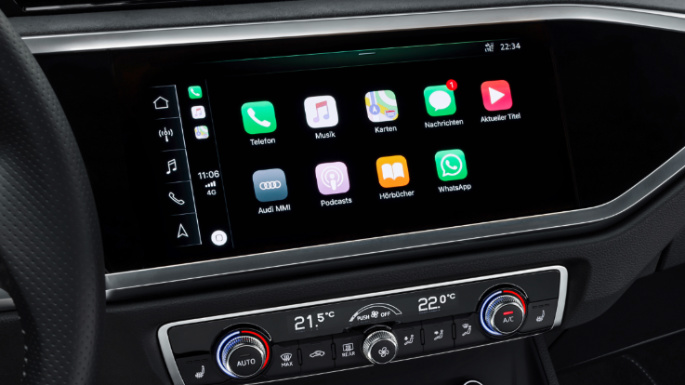 Audis tend to shine when it comes to showy interior technology, and the Q3 does well for itself here. It's as flashy as it is straightforward.

Most Q3s come standard with analog instrument panel gauges and a 10-inch digital cluster to control many vehicle settings and display audio and navigation information. A 12.3-inch TFT digital display, known as Audi Virtual Cockpit, is standard on Prestige S Line and optional on Premium Plus, can display the speedometer and tachometer, but also allow for a nearly full-screen view of the audio or navigation information.

All models get an 8.8-inch touchscreen infotainment system to control multimedia functions and navigation if equipped. Apple CarPlay and Android Auto capability are standard. At the same time, wireless Apple CarPlay connectivity and Amazon Alexa integration are standard on Prestige S Line models and part of the Navigation Package on the Premium Plus. A wireless charge pad is also included with those models, with three USB ports (including one USB-C port) standard on all Q3s.

The Navigation Package also includes a subscription to services that include a wi-fi hotspot and allow the navigation map to be replaced by a Google Earth map that can be displayed both on the touchscreen and in the Audi Virtual Cockpit.

The Q3's controls compare favorably to models like the BMW X1 and X2 and Mini Countryman for ease of use, while the system tends to be more responsive than those found in the Jaguar E-Pace and Land Rover Range Rover Evoque. Customers coming from a mainstream brand with more conventional controls may discover there's a learning curve in the Audi, but it's less steep than its rivals. 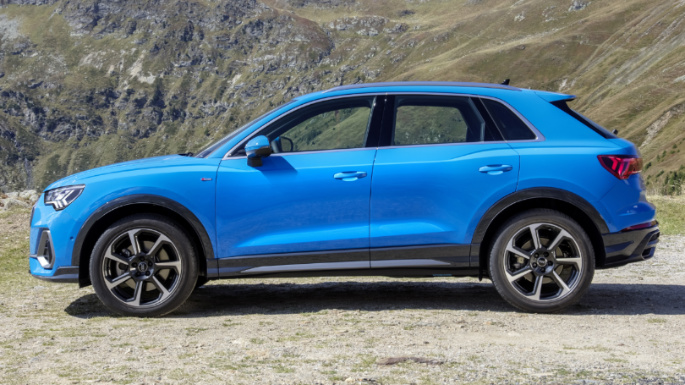 The Insurance Institute for Highway Safety (IIHS) gave the Audi Q3 a Top Safety Pick for 2019, its highest rating (results for the unchanged 2020 model have not yet been released). Headlights on the base Premium model were rated Poor, but the Q3 scored top marks in all other categories.

All Q3s come with Audi PreSense forward collision prevention, which includes automatic emergency braking with forward collision alert. Front and rear parking sensors are standard on all but the base model, while Premium Plus and Prestige S Line also add blind-spot monitoring, lane departure warning, and rear cross-traffic alert.

Adaptive cruise control with a stop-and-go function is optional on Premium Plus cars and standard on the top Prestige S Line, while rear side airbags are available for all models. But the Q3 lacks a more advanced driver assistance program like the Pilot Assist system available on the Volvo XC40, which provides some steering inputs at highway speeds, provided the driver's hands remain on the wheel.

TL;DR Competent ride and handling may outweigh middling engine performance for some.

Ignoring the trend for sportier and more aggressive SUVs, the Audi Q3 focuses more on providing a comfortable ride for passengers, while keeping the driver somewhat engaged when the road starts to twist.

Those looking for a performance SUV will be let down by the Q3's setup, even if the steering is relatively responsive and the car nimble in tight situations such as urban traffic, reviewers say. Drivers seeking a sportier compact luxury SUV should check out the BMW X2 or Jaguar E-Pace, for example, with their firmer suspensions and generally more aggressive setup. Yet the ride doesn't jar passengers like some versions of the BMW or Jaguar. Road noise is also kept to a minimum.

All Q3s come with a 2.0-liter TFSI turbocharged four-cylinder engine, with 228 horsepower and 258 lb-ft of torque. A 7-speed dual-clutch automatic transmission and "Quattro" all-wheel-drive is the only configuration, too.

Reviewers say power is sufficient, but not mind-blowing, and many rivals offer as much as 20 more horsepower in their all-wheel-drive configurations. But the Audi isn't slow and acceleration and keeps pace with most vehicles in this class. Still, some say the engine and transmission aren't always responsive from a stop, and there is sometimes a wait for the turbo to get going.

Perhaps the best trait of the Q3 is that it manages to drive much like larger Audi SUVs without the bulk. That makes it easy to manage both in town and on longer highway trips.

The Environmental Protection Agency rates the 2020 Q3 at 19 mpg city, 27 highway, with a combined estimate of 22 mpg.

Also, many of the Q3's compact rivals are available as two-wheel-drive models that achieve even better mileage than their all-wheel driven counterparts, which is worth considering if you live in an area where snow and ice are hardly a concern. But in any case, the Q3's fuel economy numbers are disappointing among its peers.

TL;DR Competitive with the class, especially considering the standard equipment.

The 2020 Audi Q3 is available in three trim levels. The S Line appearance package is available on the first two and standard on the top trim.

Premium models with the S Line package add 19-inch wheels and a distinctive exterior appearance package with revised bumpers and side sills.

The Sport Interior Package and 20-inch wheels are also available.

There are few areas where the 2020 Audi Q3 comes up short and some places where it shines. That should put it high on the consideration list for those looking for a compact luxury SUV. 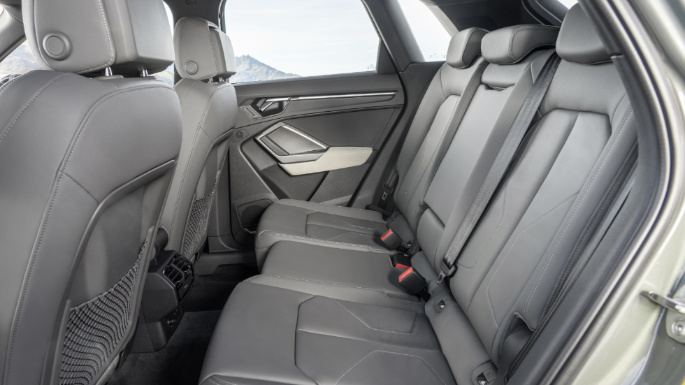 It may not have particularly engaging handling, and the rear seat reminds passengers it's a compact SUV. Still, those don't go far to diminish the tasteful design, easy-to-use technology, excellent safety ratings, and generous equipment levels found on the Audi.

A Q3 Prestige S Line tops out at just under $47,000, which is in the same area as a Volvo XC40 and less than a BMW X1, BMW X2, Mercedes-Benz GLB-Class, or Mini Countryman. But Q3s make more sense around $40,000 to avoid competition from larger five-seat SUVs like the Audi Q5. The Q3's standard all-wheel-drive will appeal to those in certain parts of the country, but it's a hindrance on fuel economy when two-wheel-drive versions of its rivals are so much more efficient for people who never see snow.

Still, the Q3 deserves more than a look from potential buyers, either trying to get into a premium vehicle or downsizing from a larger luxury car. It's an accomplished car that effectively puts a lot of positive Audi characteristics into a compact package.