Early generations of the BMW 3 Series redefined what a luxury car could be, justifying their prestige badge with sporty driving dynamics and impeccable engineering. BMW changed the luxury-car paradigm, proving that nimble sports sedans could be just as desirable as wood-encrusted land yachts.

The 3 Series spawned a number of imitators, including the Audi A4, Mercedes-Benz C-Class, and Lexus IS. Those sedans, along with the Acura TLX, Alfa Romeo Giulia, Cadillac CT4, and Infiniti Q50 (which wear more recently-introduced nameplates) still form the 3 Series’ competitive set, but the car itself has changed.

Introduced for the 2019 model year, the current-generation 3 Series (codenamed G20) feels more like a traditional luxury sedan, with a greater emphasis on comfort and convenience than previous generations. The manual transmission is gone, as are the wagon and 3 Series GT hatchback body styles. The 3 Series coupe and convertible were re-badged as the 4 Series beginning with the 2014 model year.

The biggest change for the 2021 BMW 3 Series is the addition of the 330e plug-in hybrid model to the lineup, so that’s what we test drove for this review. BMW also offers 330i and M340i versions, and there’s an M3 performance model on the way. 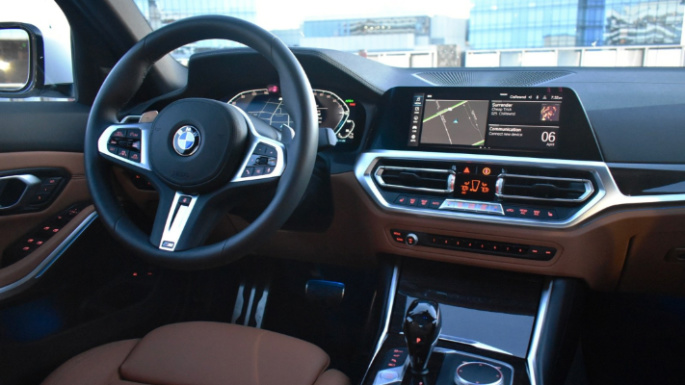 After experimenting with different styling for each of its sedans, BMW has returned to its traditional approach of a familial look, or “same sausage, different lengths” as fans of the brand like to say. Just like the classic E30 3 Series, the G20 3 Series is meant to look like a smaller version of the 5 Series and 7 Series sedans.

However, while the E30 became a design icon, the G20 just looks stuffy. The big, oddly-shaped grille looks fine on the larger 5 Series, but not quite right on this smaller sedan. As with other recent BMWs, there also isn’t much else besides that grille, and headlights meant to reference the “halo” lights on older models, that’s distinctive. Granted, most customers probably care only about the badge on the hood, anyway.

Our test car did at least have M 19-inch wheels and blue-painted brake calipers to jazz things up a bit, but those are extras bundled with the optional M Sport trim package. The standard Sport Line trim package for both the 330e and 330i (M340i models get slightly different trim) comes with 18-inch wheels, with a different design.

The interior had a nice design but was let down by unimpressive materials. As with most luxury cars, you have to pay extra to get a truly luxurious cabin. Our test car had as much plastic trim as a basic economy car, with Ash wood trim that looked so fake it might as well have been plastic. Leather upholstery is an optional extra; synthetic Sensatec material is standard. Our test car also had the optional M heated steering wheel, which looked out of place in the otherwise conservatively styled interior. 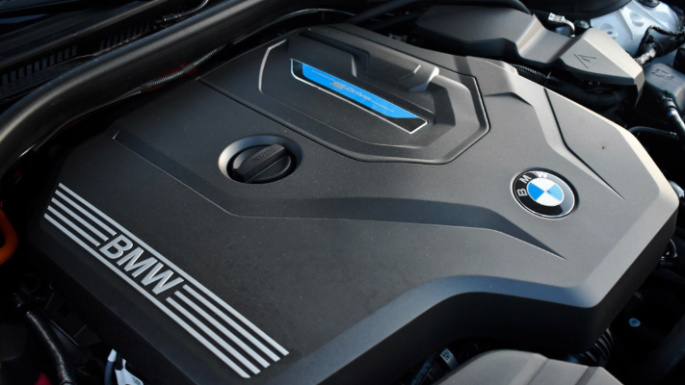 The base BMW 330i is powered by a 2.0-liter turbocharged four-cylinder engine, producing 255 horsepower and 295 pound-feet of torque. The 330e plug-in hybrid uses a less-powerful version of that engine with electric assist, for a combined output of 288 hp and 310 lb-ft of torque (with an XtraBoost overboost function), plus a limited amount of all-electric range. Finally, the BMW M340i gets a turbo inline-six, producing 382 hp and 369 lb-ft.

All three powertrains are available with rear-wheel drive (RWD) or xDrive all-wheel drive (AWD) drivetrains, but BMW mandates an eight-speed automatic transmission (the BMW M3 performance model will be available with a six-speed manual transmission). BMW says the M340i will do zero to 60 mph in 4.2 seconds, while the base 330i takes 5.6 seconds to reach 60 mph.

Despite the extra weight of a battery pack and hybrid-system components, our RWD 330e test car matches the zero to 60 mph time of its gasoline 330i counterpart, according to BMW (the automaker quotes a 5.7 seconds time for the AWD 330e xDrive). That’s pretty quick for a car ostensibly focused more on efficiency than performance, but unleashing that acceleration wasn’t very satisfying. Under heavy throttle, the transition from electric to gasoline power was clunky, and even pulling away from a stop on electric power could cause a disconcerting thud from the powertrain.

BMW still knows how to build a good sedan, but the 330e wasn’t as engaging as past 3 Series models. The chassis had that old BMW magic, with an incredible feeling of solidity that produced both a comfortable highway ride and excellent handling. However, throwing this sedan into a corner just wasn't that much fun. We felt too disconnected from what the car was doing and, despite how impressive the 3 Series is on a technical level, that lack of engagement left us underwhelmed. The 3 Series will keep you comfortable on long trips, and keep you from ending up in a ditch on twisty roads, but it won’t keep you entertained. 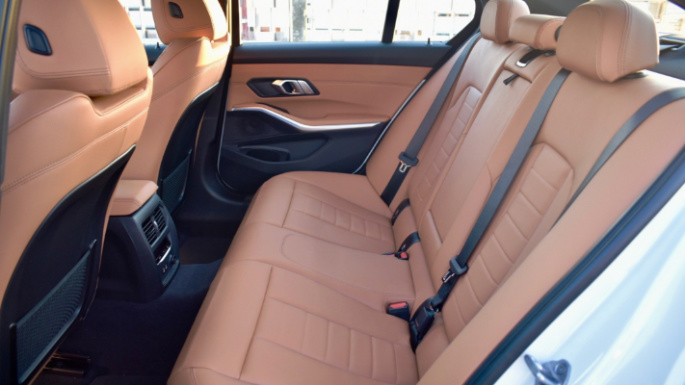 Small luxury sedans aren’t known for generous interior space, but the 3 Series does better than most. Rear headroom is the best in the segment, while front headroom is above average, although still behind the segment-leading Infiniti Q50. Legroom in both rows is about average, meaning rear-seat passengers might be a bit cramped, especially with a long-legged person sitting in front of them. The 3 Series also doesn’t have the generous shoulder room of the Acura TLX, which gives that sedan a more spacious feel.

BMW quotes 17 cubic feet of cargo space for gasoline 3 Series models—much more than competitor sedans. However, the 330e plug-in hybrid’s lithium-ion battery pack eats up a lot of that space, paring the trunk down to 13.2 cubic feet. The trunk’s long-and-narrow shape also requires an awkward reach to make maximum use of the space, although a 40/20/40 split-folding rear seat is standard.

The driving experience may have been eroded by mission creep, but BMW still knows how to set up a cockpit. Everything about the 3 Series is built around making driving easier, from the touchscreen that’s perfectly positioned for both quick glances and easy reach, to the low hood line and generous side glass, which provide good outward visibility. 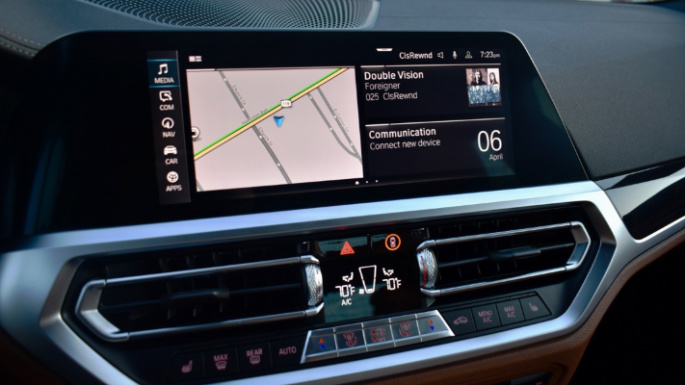 The standard BMW iDrive infotainment system includes an 8.8-inch touchscreen, Bluetooth, and a pair of USB ports. Gasoline 3 Series models get both Apple CarPlay and Android Auto, but the 330e only gets CarPlay. An optional Live Cockpit Professional system adds a digital instrument cluster and navigation, and a head-up display (HUD) is available as well.

With the optional Live Cockpit Professional setup, the infotainment system was one of the few things that felt truly premium in our 330e test car. From the high-quality graphics (incorporating BMW’s signature typeface) to the responsiveness of the screen, the system was a step above what you typically get from mainstream brands. It was also easy to use, with logical controls that make rival Mercedes’ system look amateurish.

BMW also provides lots of different ways to control things. You still get the iDrive controller that’s been a feature of BMW infotainment systems for 20 years, plus controls on the steering wheel that manipulate the instrument-cluster display, and even allow you to scroll through radio stations in the HUD. Alternatively, BMW has a voice assistant that responds to the prompt “Hey BMW,” and gesture controls that, for example, let you raise or lower the audio volume by twirling a finger.

Some of these features felt a bit gimmicky (why use gesture control when there’s a perfectly functional volume knob?), but they’re also optional. The system doesn’t force you to do anything a specific way; it provides options and lets you choose based on what’s easiest. 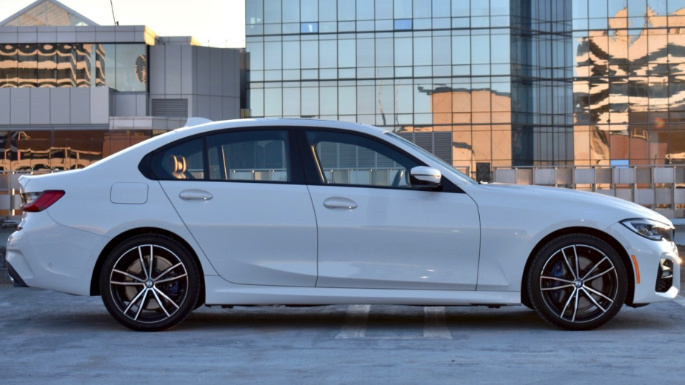 The 2021 BMW 3 Series got a “Top Safety Pick” award from the Insurance Institute for Highway Safety (IIHS), with top “Good” scores in all crash tests. However, headlight scores were mixed, and the optional Active Driving Assistant Professional driver-assist system actually scored lower than the base system in vehicle-to-pedestrian front-crash prevention.

Most luxury automakers force you to pay extra for safety features that are standard equipment on many cheaper cars, and BMW is no exception. Adaptive cruise control is standard on a Honda Accord or Toyota Camry, but on the 3 Series, you need the aforementioned Driving Assistant Professional Package, which also includes lane-keep assist and automated lane centering.

That package does at least include a stop-and-go function for the adaptive cruise control, so it doesn’t need to be reset when the car comes to a complete stop. Extended Traffic Jam Assistant allows the car to creep forward at slow speeds in heavy traffic, and Active Side Collision Avoidance vibrates the steering wheel to alert drivers who are about to sideswipe another vehicle. 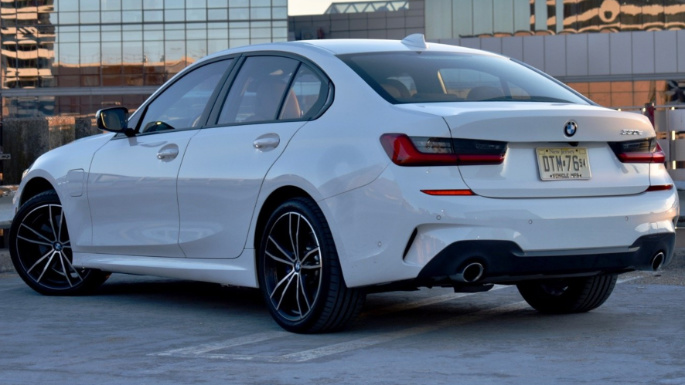 The new BMW 330e plug-in hybrid is rated for 23 miles of electric range with RWD, or 20 miles with AWD, with efficiency ratings of 75 MPGe and 67 MPGe, respectively, in electric mode. We found that easily achievable in the real world, but fuel economy in hybrid mode is less impressive. The RWD 330e is rated 28 mpg combined, while the AWD 330e xDrive is rated at 25 mpg combined. So if you don’t plug in regularly, you’ll actually get worse gas mileage than the non-hybrid 330i model.

Pricing for the 2021 BMW 3 Series starts at $42,245 for a base RWD 330i, rising to $57,695 for an AWD M340i (all pricing includes a mandatory $995 destination charge). Our RWD 330e test car was priced in the middle of that range, starting at $45,545. However, a long list of options, including the Live Cockpit Professional infotainment system, Dynamic Handling Package (M Sport brakes, adaptive suspension, variable sport steering), and the Driving Assistant Professional Package, brought the as-tested MSRP to $59,645.

That price inflation should be familiar to anyone who’s shopped for a luxury car. To get the version that justifies the prestige badge, you have to pay a lot more than the base price.

That makes the 3 Series a poor value in general, but even amongst rivals, the BMW isn’t very compelling. It has a nice feeling of solidity and an intuitive infotainment system, but that’s no longer enough to give the 3 Series a decisive edge over rivals.

The Audi A4 has impressive tech as well, the Acura TLX, Alfa Romeo Giulia, and Genesis G70 offer more thrills, and the Volvo S60 plug-in hybrid offers comparable electric range—with greater efficiency. The 3 Series used to be the best at everything, but the competition has caught up.