BMW was once known for sports sedans, and the 5 Series was one of the most prolific of those sedans. Sitting between the 3 Series and 7 Series in size and price, previous generations of 5 Series were known for a balance of performance and luxury, with impeccable engineering throughout.

Today, the BMW 5 Series is largely irrelevant. The 3 Series is now so big that there is less reason to upgrade, and most buyers are more interested in SUVs anyway. The competition—including the Audi A6, Jaguar XF, Mercedes-Benz E-Class, and Volvo S90—has also gotten better.

That doesn’t mean BMW has given up on the 5 Series. The current generation (codename G30) arrived for the 2017 model year, but it gets a midcycle refresh (or LCI, short for “Life Cycle Impulse,” in BMW speak) for 2021. Major updates include a 48-volt mild-hybrid system, a bigger infotainment touchscreen, and subtle styling changes.

The 2021 BMW 5 Series is not like the 5 Series models of old. That may drive away hardcore car fans, but the 2021 model makes a strong case to new-car buyers, maintaining sportier-than-average driving dynamics, along with the tech and luxury features expected of a car in this segment. 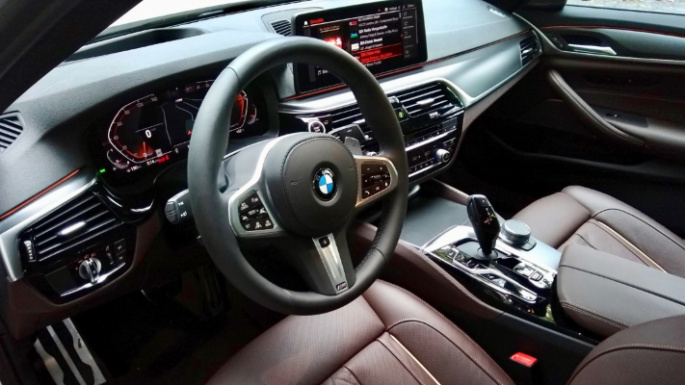 The 5 Series has the most restrained design of any current BMW sedan. It doesn’t have the design flourishes of the 3 Series or the imposing size of the 5 Series. Where most luxury cars (and likely their drivers as well) are eager to show off, the 5 Series flies under the radar.

For the 2021 model year, the 5 Series gets a minor styling refresh that gives the sedan a sleeker look. The standard LED headlights are a bit more streamlined than the old versions, which stood slightly proud of the front end. BMW's signature twin-kidney grille is larger than before but not comically large like the massive protuberance on the 7 Series sedan.

Other changes include trapezoidal tailpipes, new L-shaped taillights, and new front and rear bumpers for the M Sport Package. BMW says the 5 Series is 1.2 inches longer than before, but still with a reasonably-good drag coefficient of 0.27, allowing the car to slice through the air more efficiently.

The interior design hasn’t changed much from last year, keeping the familiar BMW layout. You could tape over the blue and white roundel on the steering wheel and still know from all of the other details that you were sitting in a BMW. From the positioning of the touchscreen to the unusual-looking shifter, to the typefaces and door chimes, everything has a specific BMW style. These details are now as important to the automaker’s identity as the driving dynamics of its cars.

As with other luxury cars, the prestigious badge doesn’t guarantee high-end materials. Lower trim levels get standard SensaTec upholstery rather than real leather, while two grades—Dakota leather and Nappa leather—are available at extra cost. Our 540i xDrive test car had Nappa leather (a $2,500 option) in Mocha, which looked and felt great.

Aluminum trim with an unusual scale pattern added to the high-end feel, but the standard leather-wrapped “sport” steering wheel felt out of place. It was the only overtly-sporty element of the interior, and its rim thickness and overall diameter seemed too large, especially considering how little effort the electric power steering required. 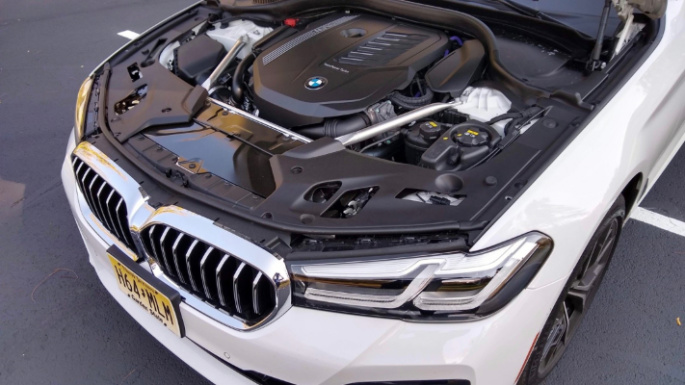 BMW offers a wide array of powertrain options for the 2021 5 Series. The base 530i sedan gets a 2.0-liter turbocharged four-cylinder engine making 248 horsepower and 258 pound-feet of torque. It may be the entry-level 5 Series, but the 530i can still do zero to 60 mph in 5.9 seconds, according to BMW. Top speed is electronically limited to 130 mph with the standard tires, and 155 mph with optional performance tires. An eight-speed automatic transmission and rear-wheel drive are standard, with xDrive all-wheel drive available as an option.

Next up is the 540i, which gets a 3.0-liter turbocharged inline-six engine and, for the 2021 model year, a 48-volt mild hybrid system. This adds a small battery pack that can power accessories like lights, climate control, and power windows, and also allows for a more aggressive engine start-stop system. However, despite the “hybrid” nomenclature, the 540i is not capable of driving solely on electric power. Rivals Audi and Mercedes have added similar systems to the A6 and E-Class, respectively.

The 540i boasts 335 hp and 362 lb-ft of torque, getting it from zero to 60 mph in 4.9 seconds with rear-wheel drive, and 4.6 seconds with xDrive all-wheel drive. As with the 530i, an eight-speed automatic is the only available transmission, and top speed is limited to 130 mph or 155 mph, depending on what tires you choose.

Our test car was a 540i xDrive, which felt like a facsimile of an old BMW sedan made by a different company. The 540i felt appreciably sportier than most rivals, with wonderfully-precise handling (thanks in part to the optional adaptive dampers) and an ultrasmooth six-cylinder engine. However, it’s not, as the BMW slogan used to say, an “Ultimate Driving Machine.” It’s just a bit too distant; more of a luxury car playing at being sporty than a true driver’s car.

Granted, BMW does offer sportier options further up the 5 Series hierarchy. The M550i xDrive sedan gets a 4.4-liter twin-turbo V8 making 532 hp and 553 lb-ft of torque, which shaves 1.0 second off the 540i xDrive’s zero-to-60 mph time. The legendary M5 gets a more powerful version of the V8, with 617 hp in Competition spec. BMW says the M5 will do zero to 60 mph in just 3.1 seconds, with a top speed of 190 mph when equipped with the optional M Driver’s Package.

On a different note, BMW also offers the 530e plug-in hybrid, with a powertrain consisting of a 2.0-liter four-cylinder engine, eight-speed automatic transmission, and an electric motor. Combined output is 288 hp (40 hp more than before) and 310 lb-ft of torque. The 530e can do zero to 60 mph in 5.7 seconds, but is also capable of driving solely on electric power for significant distances. The 2020 model had a 21-mile electric range, but Environmental Protection Agency (EPA) figures for the 2021 model haven’t been published yet. An all-wheel-drive 530e xDrive model is also available. 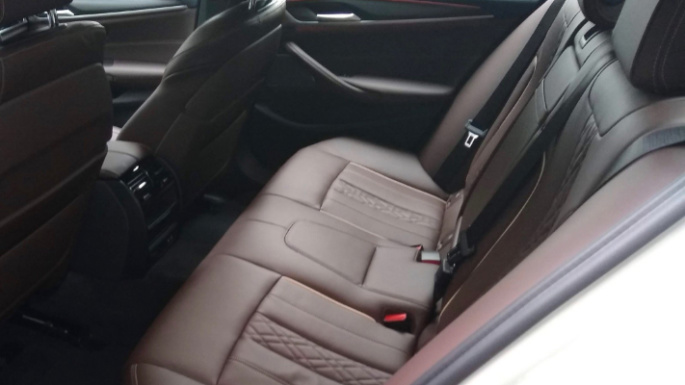 In the United States, the 5 Series is available only as a four-door, five-seat sedan. Wagon variants of the Mercedes-Benz E-Class and Audi A6 are available here, as is the Volvo S90 sedan’s V90 wagon sibling, but BMW no longer offers a 5 Series wagon in this market.

The 5 Series sedan feels as spacious as its generous exterior proportions indicate. Front-seat space is competitive, and while the rear seats appear a bit less roomy than rivals on paper, they still offer plenty of room for occupants to stretch out. At 14.0 cubic feet, the 540i has more trunk space than an Audi A6 or Mercedes-Benz E-Class, and the rear bench has a 40/20/20 split fold for longer items.

Our test car was equipped with 16-way power front seats with four-way lumbar support, driver memory, heating, and ventilation. Despite the array of features, these weren’t overstuffed luxury-car armchairs, offering plenty of supportive bolstering to augment the cushioning. Forward visibility over the long, high, hood was poor, making it difficult to place the car on the road and maneuver in parking lots. A surround-view camera system helped with the latter, at least. 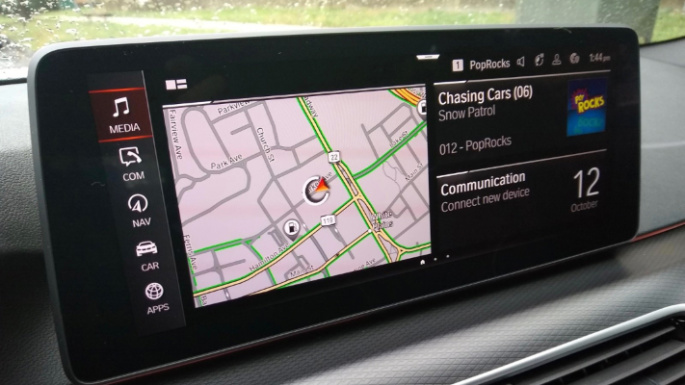 For 2021, the 5 Series gets a standard 12.3-inch infotainment touchscreen (up from 10.2 inches before) with the lates iDrive 7 system, as well as a 12.3-inch Live Cockpit Professional digital instrument cluster. Apple CarPlay/Android Auto compatibility, Bluetooth, SiriusXM 360L satellite radio, and a built-in WiFi hotspot are also standard.

Graphics on both the instrument cluster and infotainment touchscreen were excellent, and the infotainment screen’s location atop the dashboard made it easy to read while driving. The layout of the instrument cluster could have been better, however. Unless you switch into sport mode, a power meter is shown in place of the tachometer. This is likely to indicate when the mild-hybrid system is active, but it will probably just confuse drivers who don’t know what it is.

As with other BMW models, a rotary knob is the default controller for infotainment functions. It provides the tactile feel missing from a touchscreen-only interface, and is much easier to figure out than, say, Mercedes’ touchpad controller. Voice control, which responds to the prompt “Hey BMW” is also available.

Alternatively, you can use gesture controls to, for example, raise the audio volume by twirling your finger. However, it’s hard to do this precisely, and you need to learn the specific gestures the system responds to. What’s so bad about a volume knob?

The Insurance Institute for Highway Safety (IIHS) hasn’t crash-tested the 2021 BMW 5 Series, but the virtually-identical 2020 model received a “Top Safety Pick+” award—the organization’s highest. That included top “good” scores in all crash tests, as well as front-crash prevention tests. The standard headlights were only rated “marginal,” however, but optional lights received the “good” rating.

Similar features are now offered as standard equipment on some less-expensive cars, but BMW distinguishes itself with the sophistication of its driver-assist tech, and smooth operation. The traffic-jam assist feature allows the car to accelerate and brake in stop-and-go traffic on highways, BMW claims, while at higher speeds the adaptive cruise control does a reasonable impression of a competent driver, with less-jerky inputs than systems from mainstream brands. 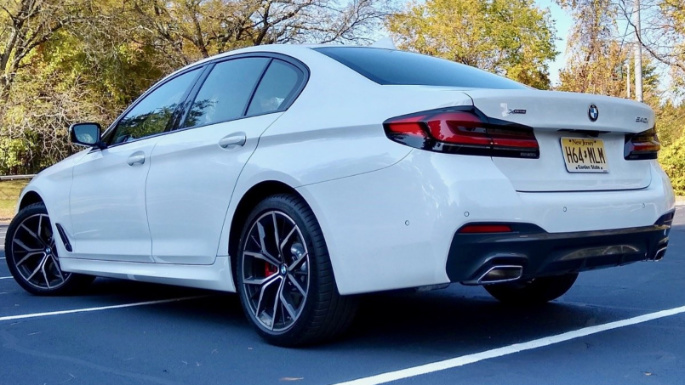 It’s hard to find good value when looking at most luxury cars, and that’s the case with the 2021 BMW 5 Series. Pricing starts at $55,195 for the base rear-wheel-drive 530i model, but our all-wheel-drive 540i xDrive test car had an MSRP of $77,935. That reflects not only the bigger engine and all-wheel drive but also a long list of options.

Notable options included Nappa leather ($2,500), the Driving Assistance Plus Package ($1,700), Premium Package (remote start, power trunk lid, gesture control, and Harman Kardon audio system for $1,850), and the Dynamic Handling Package ($3,200), which adds adaptive dampers. These features add a lot to the car’s price, but they’re also the features that make a 5 Series stand out from the competition and, more importantly, cars from more mainstream brands.

There’s no point in buying a loss-leader luxury car, and that means you must always be prepared to check a few option boxes. It’s the same case with most other luxury brands (Hyundai’s Genesis brand being a notable exception). If you want to equip a 2021 BMW 5 Series in a way that justifies stepping up to a new BMW, you need to spend considerably more than the base price.