The 2019 Chevrolet Camaro is a rear wheel drive sports car available in both coupe and convertible versions.

Reviewers often refer to it as a muscle car, forcing it into a class comprised of two other iconic American sports cars with which it directly competes: The Ford Mustang and Dodge Challenger.

It more loosely competes with cars like the Subaru BRZ, Toyota 86, Mazda MX-5 Miata, BMW M2, Lexus LC and RC, Honda Civic Si, Jaguar F Type, and the new Toyota Supra. This is mainly due to the Camaro’s wide range of engine options and performance capabilities.

The Camaro is currently in its sixth generation.

In 2019, Chevy gave the Camaro a front end aesthetic refresh and an upgrade to their new infotainment 3 system. Additionally, the 1LE track package is now an available option for the cars equipped with the four cylinder engine. This addition essentially makes the turbo 1LE like a new car.

The SS models with the automatic transmission now feature an optional 10-speed transmission rather than the base 8-speed.

The base model with the turbocharged four cylinder engine provides a healthy 275 horsepower. The top ZL1 trim offers a supercharged V8 engine which provides 650 horsepower. With so many options in between, there is much to like about what it can offer potential buyers. And with a plethora of technology and convenience options available as well, the 2019 Camaro is reported to offer an up to date driving experience.

The front fascia refresh of the 2019 Camaro was the most noticeable change to the car but was also the most controversial. After the facelift was revealed, it was received by most reviewers with mixed feelings, including the general public.

The Camaro does still look like a sports car should. Its headlights are thin and purposeful. The windows are mounted high on the doors and are narrow, adding to the “ready to pounce” design. The rear fenders are also flared, providing a stance that compliments its sleek design.

Various trim levels and packages which include front and rear spoilers, Brembo brakes, upgraded tires, and an array of wheel options add an edgy presence to the already sporty appearance of the Camaro. 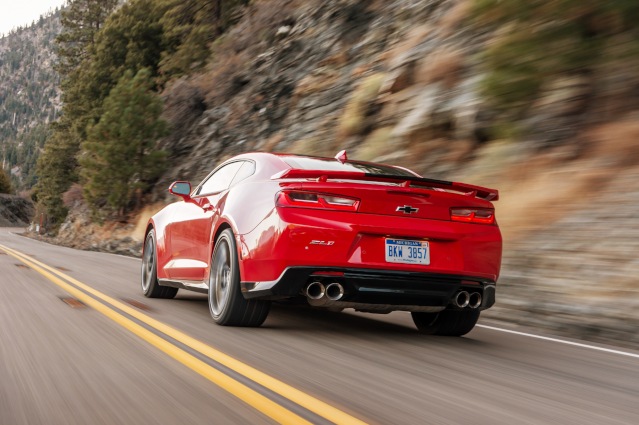 Interior quality is noted to be neither stellar nor lacking while comfort is good for the class. 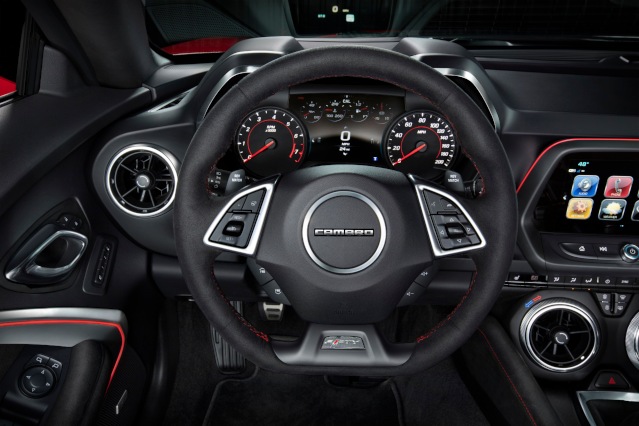 Because the windows are so small, the cabin seems smaller than it is. Consequently, visibility has been one of the most well-documented complaints about the Camaro for years.

The seats are comfortable and supportive. Upgrading to the Recaro seat option takes away some of the comfort but adds support for more spirited driving. Conversely, the magnetic ride control offered on higher trim levels provides a smoother driving experience over long periods while also being able to adapt to harsher driving conditions.

Practicality and utility are both low, which is typical for a sports car.

Cargo space in the Camaro comes in behind both the Ford Mustang and Dodge Challenger at only 9.1 cubic feet. The trunk opening is also small. The convertible version of the Camaro cuts down on trunk space even more.

The rear seats fold down for longer items, but they are more appropriate for additional cargo space when not folded. Upright, they are tight and not well-suited for additional passengers. The Camaro does come with a LATCH child seat system.

Legroom again falls behind the Mustang but beats out the Challenger with 43.9 inches available in the front seats. 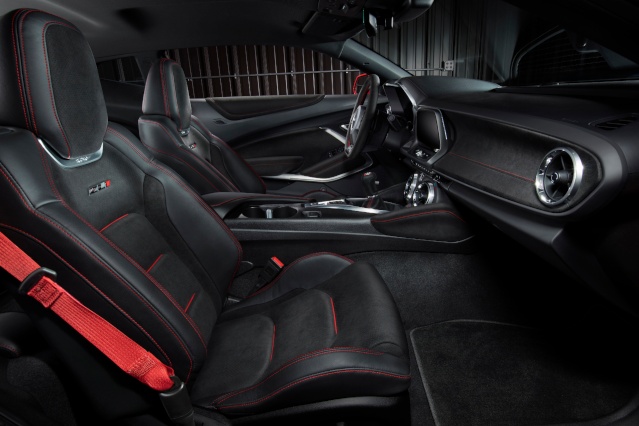 The 2019 Chevy Camaro offers well-rounded technology options for its buyers.

Apple CarPlay and Android Auto are both standard, even on the base trim. A 7-inch touchscreen display, 4GE LTE Wifi connectivity, Bluetooth, a back up camera, cruise control, drive mode selection, and OnStar are all standard equipment.

A host of upgrades are available throughout the trim levels of the Camaro.

The base convertible trim adds remote start and satellite radio to the mix.

Moving even higher through the trim levels provides leather upholstery, heated and ventilated seating, dual zone automatic climate controls, and GPS navigation. The most luxurious features the Camaro offers include a heated steering wheel, automatic dimming mirrors, a heads-up display, memory functions for the driver’s seat, and a sunroof.

Buyers who prioritize performance over luxury can opt for a performance exhaust, a 10-speed automatic transmission, a track data recorder, launch control, and upgraded track suspension on the highest of trim levels.

Safety and driving assistance features are well-represented for Camaro buyers. Unfortunately, most of the safety features which are standard in many new vehicles are optional upgrades or are only available on the higher trim levels of the Camaro.

Reviewers of the Camaro note its competence in acceleration, handling, and braking. Edmunds even goes as far as to call the driving experience, “fun.”

Though the V8 engine options are the most notable for the Camaro and the muscle car segment, testers of the car from Motor Trend, Kelly Blue Book, and Car and Driver note that the four and six cylinder options have plenty of power.

Handling is said to be tight and precise, and the optional suspension upgrades make handling even better. Though testers preferred the V8 engine, they noted that the V6 was an especially competent alternative.

The manual transmission option adds an additional enhancement to the driving experience while strong acceleration for each engine option is solid for the class.

With so many performance options available, the Camaro is highly customizable. It can be used for a daily commute, a fun weekend at the track, or a little bit of both.

The V6 comes in slightly worse with an EPA estimated 16 and 27 miles per gallon in the city and the highway respectively with the manual transmission. The automatic adds three more miles per gallon to both estimates. The V6-powered Dodge Challenger SXT receives nearly identical numbers to the Camaro with a slightly better highway average.

The V8 Camaro SS with the 10-speed automatic transmission matches the V6 gas mileage with a manual transmission. The manual Camaro SS drops to 16 miles per gallon in city driving and 27 in highway driving.

The Camaro provides fantastic value regardless of the trim level.

The V8 engine options provide especially good value for their price to performance ratio. Additionally, the ability to apply the 1LE performance package to the four and six cylinder models is able to drastically improve the Camaro’s sporting credentials for just a few thousand dollars extra without having the downsides of a large V8 engine.

It has evolved into a competent and easily modifiable performance machine for less than the German and Japanese competition.

Even the base Camaro is widely regarded as a good first sports car.

Chevrolet offers the Camaro in seven different trim levels. You can get any trim in a convertible. You may also pair the 1LE performance package with any trim, though the convertible and 1LE Performance Package aren’t compatible.

The 1LE Performance Package for the LS and LT trims adds a tuned suspension, limited slip differential, wider tires, larger wheels, an improved cooling system, and larger brakes. Recaro seats, a dual mode exhaust system, and a track data recorder are optional on only certain trims throughout the lineup with the 1LE package.

The RS package can be paired with the LT trims and includes larger wheels, a spoiler, improved front aesthetics, and can be combined with the increased cooling and braking capabilities that come with the 1LE package.

The 1LS is the base model Camaro. MSRP is around $26,000 after destination fees. The four cylinder, turbocharged engine is standard and mated to a six-speed manual transmission. An 8-speed automatic transmission is optional.

The LT trim one-ups the LS and starts at about $26,500 with destination included. The four cylinder, turbocharged engine is still standard, but a V6 engine is available. Features added to the 1LT from the base 1LS include remote start, a power-adjustable passenger seat, and paddle shifters for automatic transmission models.

The Camaro 2LT starts at about $28,500, with destination, and adds leather seating, heated and cooled seating, and dual zone climate controls. The Technology Package can be added to both the 1LT and 2LT to include a 9-speaker Bose audio system as well as an 8-inch MyLink touchscreen infotainment display.

The 3LT trim starts at nearly $32,000, including destination, and receives the V6 engine as standard. Navigation is added to the list of options.

The Chevrolet Camaro SS is the lowest trim level to receive the V8 engine. A 6-speed manual transmission with downshift rev-matching is still standard, but buyers can opt for a 10-speed automatic transmission. Prices start at just under $38,000 with destination included.

The 1LE Performance Package on the SS and higher trim levels adds even larger brakes and cooling system than the lower trim levels’ 1LE, along with magnetic ride suspension.

The 2SS starts at $43,000 with destination. It features the optional Convenience and Lighting package available on the 3LT trim, but with some different aesthetic features.

The ZL1 is the top of the line trim offered for the Camaro. It starts at almost $63,000 with destination included. A supercharger is added to the engine to bring power to 650 horsepower.

Launch control is added as a feature as well as the Extreme Track Performance option. This provides a wider tire setup, forged wheels, carbon fiber hood and spoiler, and race-tuned suspension.