The Chevrolet Corvette is an icon of American automotive history and one of the most recognized and revered cars across the globe. The first-generation Chevrolet Corvette (commonly referred to as the C1) debuted in 1953 at the General Motors Motorama event at the Waldorf-Astoria hotel in New York City. 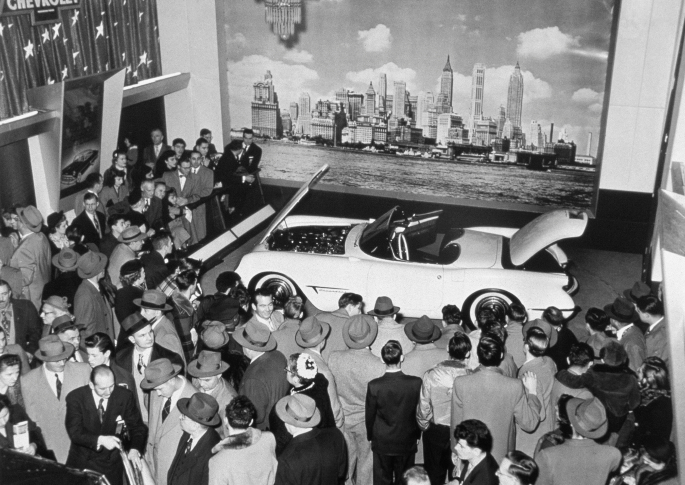 The C1 Corvette had a nine-year production run when it was replaced by the second-generation Corvette, or the C2, in 1962. Penned by legendary car designer Harley Earl, the Chevy Corvette drew inspiration from numerous sources. Earl wanted to create a true American sports car, and he noticed all the European sports cars that American GIs were bringing home with them after their service in World War II. Another inspiration was the Nash-Healey, a two-seat sports car from Nash Motors. Earl and his team created "Project Opel" in the early 1950s, which eventually became the original Corvette we know today.

Another notable member of the Corvette team was Zora Arkus-Duntov, the head Corvette engineer and commonly referred to as the 'Father of the Corvette.' Duntov joined the team after seeing the original car at the Motorama event, and he became the man responsible for many of the car's innovations, much of its early racing success and the implementation of the successful Grand Sport program. Of Duntov's many accomplishments with the Corvette, developing it into a proven sports car was one of his most significant. Duntov and his team set a stock car record at the Pike's Peak hillclimb in 1956, and also set a new record at Daytona Beach by hitting 150 mph in the flying mile.

Duntov's Grand Sport program launched in the final year of the C1 Corvette in 1962. The program was focused on creating a lightweight racing Corvette that could compete against established marquees. Only five original Grand Sports were built with a 550-horsepower aluminum small-block V8 engine. These incredibly rare cars weren't formally allowed to go racing by GM and ended up in the hands of private car collectors. 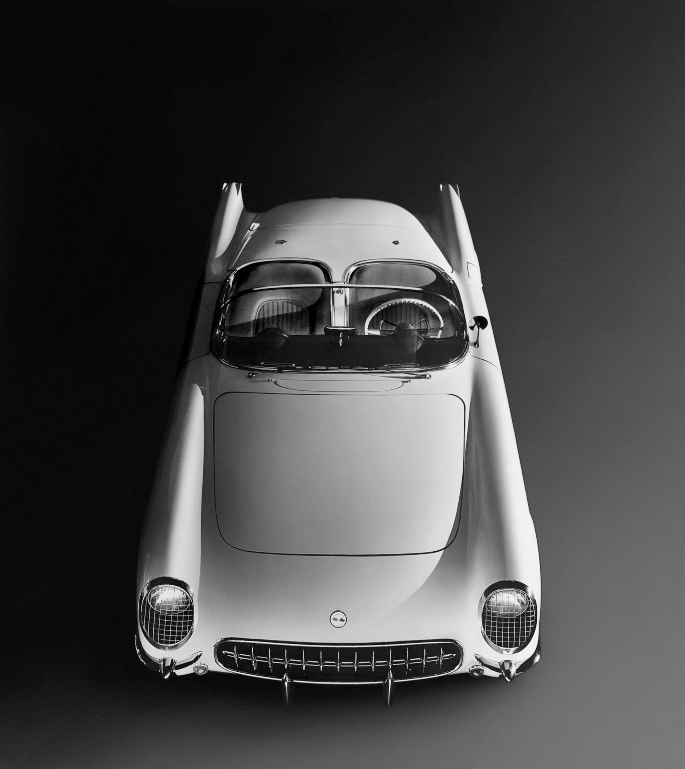 The very first production Chevrolet Corvette C1 rolled off a makeshift assembly line in Flint, Michigan in June of 1953. The initial batch of cars, which was limited to only 300 units, were all black canvas soft tops, and all wore the now iconic Polo White exterior color scheme and featured an equally iconic red interior. Under the hood, they used a 3.8-liter inline six-cylinder engine (no V8 yet) with three Carter carburetors, mechanical lifters, and a high-lift camshaft. Nicknamed 'Blue Flame,' the engine produced 150 horsepower and was mated to a two-speed Powerglide automatic transmission.

Earl's design for the C1 Corvette is beautiful and immediately recognizable. The Corvette convertible's styling is tight and compact and features sweeping lines that run from the headlights over the rear fenders, white-walled wheels, taillights that protrude in classic 1950's styling, and a unique chrome grille. Instead of a steel body, GM used fiberglass to shape the Corvette; it was one of the first instances of such extensive use of then-revolutionary lightweight material. 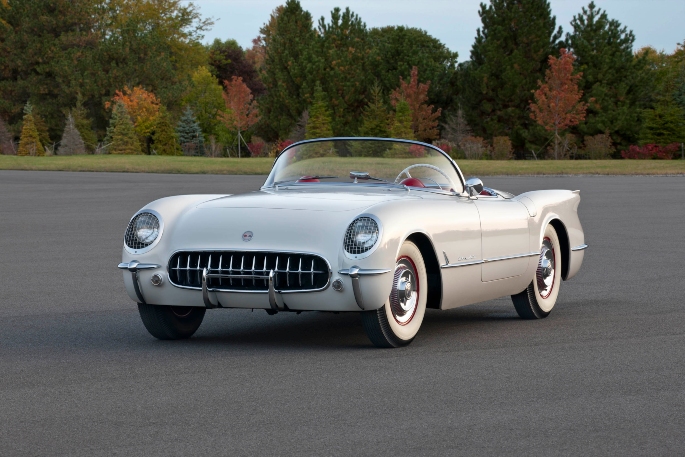 1954 saw a significant increase in the Corvette's production run, with some 3,640 cars being produced. General Motors also expanded the colors customers could get their Corvette in - Sportsman Red, Black, and Pennant Blue - and increased the engine's output to 155 horsepower.

In 1955, the Corvette received arguably its most significant update ever, an improvement that would set the template for all future Corvettes. This was the year that GM put a 4.3-liter small-block Chevy V8 engine under the Corvette's hood, dramatically increasing power over the six-cylinder to 195 horsepower. GM fitted the Corvette with a three-speed manual transmission, the first time the car featured anything other than an automatic transmission. These improvements were well received and helped improve the Corvette's sportscar credentials. Chevy built 700 Corvettes for the 1955 model year.

More improvements and upgrades arrived in 1956 including a removable hardtop, exposed headlamps, a redesigned exterior that now included the famous 'coves' or sculpted side scoops, and manual roll-up windows. Horsepower was again bumped up - the small-block V8 now made up to 240 horsepower - and the original inline six-cylinder engine from the first year Corvettes made was phased out entirely. Duntov, who was instrumental in continually pressing GM to improve the Corvette's performance, tried to convince GM to formally begin a racing program with the car but to no avail. He'd have to wait a little longer for that to happen. 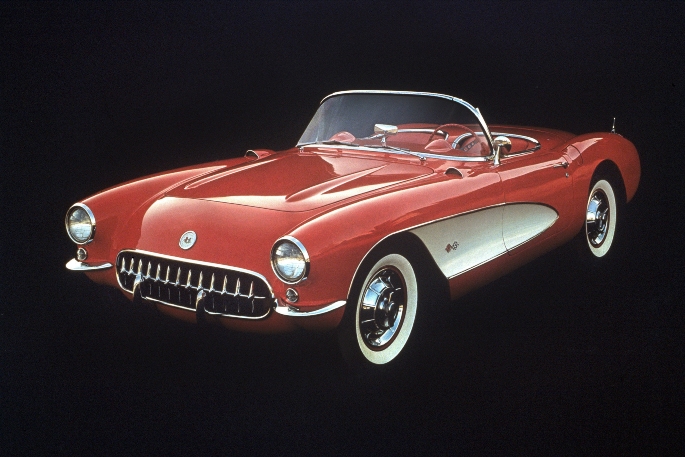 '57 Corvettes benefited from yet more advanced technology including optional fuel injection and a limited slip differential. If a Corvette had fuel-injection back then, they were given the nickname 'fuelie.' The car's V8 engine was increased to 4.5-liters and made around 290 horsepower, increasing the car's top speed to a reported 132 miles-per-hour. A new four-speed manual transmission was also introduced in 1957.

Another notable achievement made by this year's Corvette was that it became one of the very first mass-produced engines to achieve a rating of one horsepower per cubic-inch, something Chevrolet capitalized on with their "One HP per cubic inch" marketing slogan. '57 Vettes could also be had with heavy-duty racing suspension and other premium racing-derived components. Chevy also offered a tachometer that could be mounted to the steering column on 'fuelie' optioned models. This was also the last year that GM used 'Polo White' on the Vette. 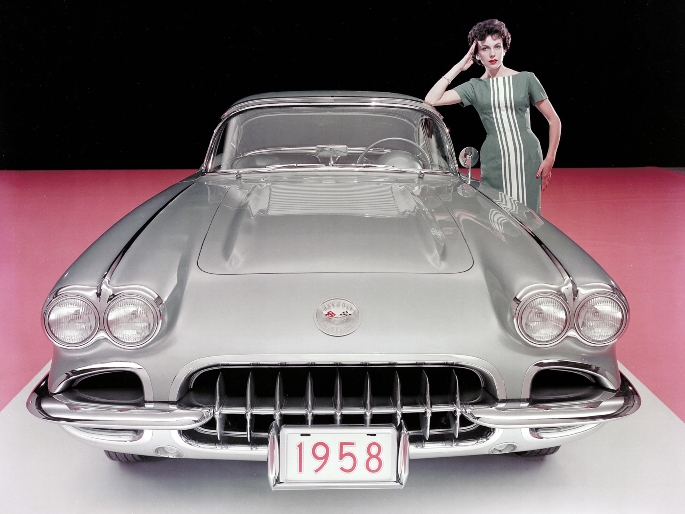 Updates for the 1958 Corvette were substantial and focused primarily on the car's exterior. The single headlights with mesh covers were replaced with a four-headlight design (two on each side), the hood was given faux louvers, and the trunk area received unique chrome accents. The interior also got an update, most notably the new instrument cluster which placed the tachometer directly in front of the driver. 1958 also marked the year that the Corvette finally turned a profit.

Despite the philosophy of continuous performance improvement, the power output for both the 1958 and the 1959 Corvettes remained constant and didn't change. 1959 also only saw minor interior and exterior changes as well. A turquoise soft top color was available (the only year this was offered, actually), there was a new 'T-shift' handle for the four-speed gearbox, and sun visors could be had as an optional extra. 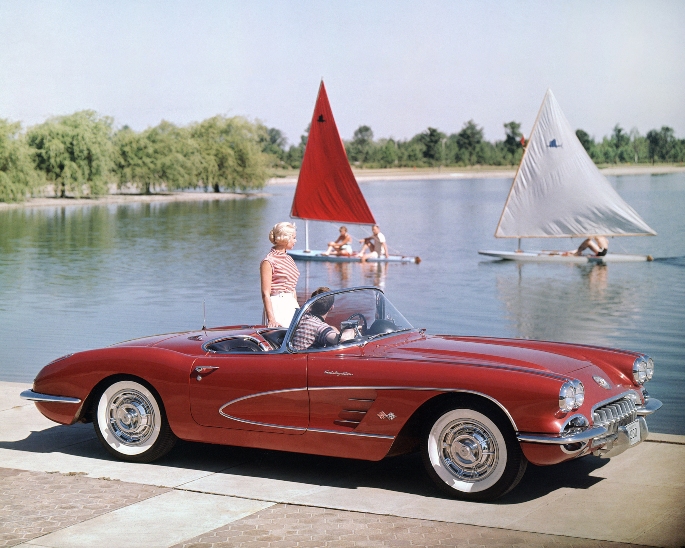 For 1960, Chevrolet gave the Corvette aluminum radiators and the rarest factory paint color to come on any Corvette: Cascade Green. There are reportedly only 140 cars wearing this color. The 1960 model year Corvette also marks the final time the car would have its taillights molded into the rear fenders. The following year would see new rear lights that echoed the car's headlights - four lights, two on each side of the vehicle, placed into the bumper. These new taillights would become one of the Corvette's signature design elements. 1960 marked the first time that the Corvette crested the 10,000 unit-per year mark with Chevrolet producing 10,261 cars with a base price of $3,872.

In popular culture, the Corvette was featured in the hit television show 'Route 66'. The show ran for four seasons on CBS and followed the adventures of two men, Tod Stiles and Buz Murdock, crossing the United States in their Chevrolet Corvette. A 1960 model Corvette was the first car to be used in the show, and the characters would use a new model year Vette with each new season. When the show ended in 1964, the characters were driving a 'Saddle Tan' colored C2 Corvette.

Several classic Corvette styling elements were changed with the 1961 model year. In addition to new taillights, this year marked the end of white-walled tires and the word 'Corvette' was spelled out on the car's nose instead of the round emblem found on previous cars. The two-tone paint job in the car's cove area was eliminated, and also gone were the chrome "teeth" on the front grille in favor of a mesh screen over the radiator opening. The rear of the car was changed to a new 'boat-tail' design, and power from the engine was increased to 315 horsepower for the most powerful fuel-injected V8 engine.

The 1962 Corvette was the last model year to use a solid rear axle. Solid axles had been a feature of the Corvette since the original car back in 1953. A new engine was another major update for the Corvette: Displacement on the V8 was increased to 5.4-liters, and power swelled to a maximum of 360 horsepower.

Another element of the Corvette that changed was the exposed headlights. That styling element disappeared for decades while pop-up headlights became the norm until 2005 when the C5 model Corvette brought them back.

1962 also saw the largest production run of the Corvette in the car's history to that date, with over 14,500 cars. The car's price also reached a new high point with a base sticker of $4,038.

1962 was the final year of the C1 Corvette. Over its nine-year run, the C1 Corvette became a legitimate competitor to the sports cars coming from Europe. The next iteration of the Corvette, the C2 in 1963, would see significant changes to the Corvette's body style, a new design language, improved performance, and the introduction of perhaps the most famous moniker in the Corvette's history: 'Sting Ray'.

Next Up: Corvette C2