The C3 Corvette, built between 1968 and 1982, was the third generation of Chevrolet’s venerable Corvette sports car. Occasionally seen as polarizing, the C3 garnered both praise and criticism for its radical design, purpose and driving dynamics.

Expectations were huge when the model launched. Zora Arkus-Duntov and Billy Mitchell, the second generation C2 Corvette designers, had just built the hugely successful, powerful, and respected Sting Ray Corvette. Even today, the Sting Ray is widely regarded as one of the best Corvette models ever made. 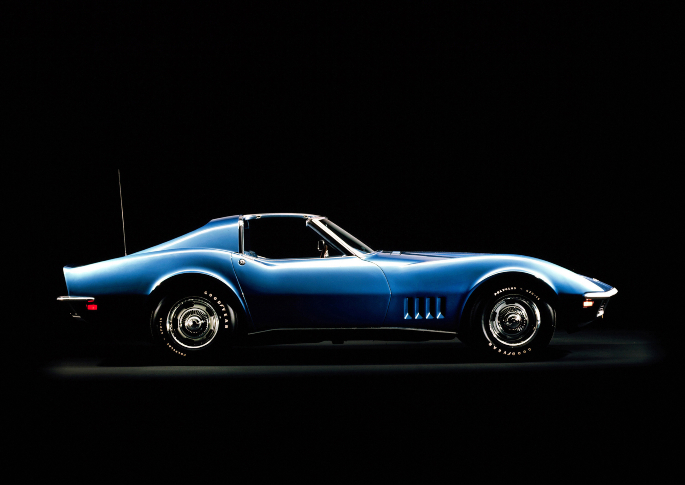 The pressure to build an appropriate C2 successor did not only come from the expectations set by the previous generation, though. The mid- to late- 1960’s saw the rise of the muscle car. Competitors like Pontiac, Buick, and even Chevy themselves were developing powerful and inexpensive cars with stellar straight-line performance.

If the Corvette was to keep up, it had to distinguish itself somehow other than with pure acceleration, a fact that Duntov and Mitchell knew all too well.

The Beginnings of the C3 Corvette

C3 development started at the C2’s mid-cycle refresh. Frank Winchell, Chevrolet’s engineering director, Duntov, and Mitchell all set out to produce their idea of what the C3 should be.

All three agreed that the front engine layout should be scrapped, and they planned their designs accordingly.

Winchell based his concept on a rear-engine design with styling cues taken from the Porsche 911 and current Chevrolet Corvair.

Duntov and Mitchell based their mid-engine design on the Mako Shark concept. Styling elements included a pointed nose, steeply raked roofline, and a flat, duck-tail rear-end design, all of which made their concept look aggressive and futuristic.

Despite the desire to create a mid-engined Corvette, budgetary constraints, the lack of appropriate mid or rear-engine parts compatibility, and weight distribution issues prevented the C3 from truly being what its designers envisioned.

The front-engine layout along with the chassis and independent rear suspension would both be carried over from the previous C2 Corvette. To accommodate this, the C3 concept would have to be re-worked from its initial mid-engine compatible design to a more conventional design.

Billy Mitchell hired new designer Larry Shinoda to take on the task. The resulting concept would be the Mako Shark II, a design that could have taken on the mid-engine layout if anything were to progress toward that end.

In 1965, a non-functioning concept was built and shown to the public to garner excitement, followed by a fully functional version. After a short hiatus, a more reasonably designed second run concept was introduced which provided a more realistic image of the soon-to-be C3 Vette.

The “shark generation” Chevy Corvette was about to launch, but not before production was delayed one year from its original 1967 target release due to numerous design issues. 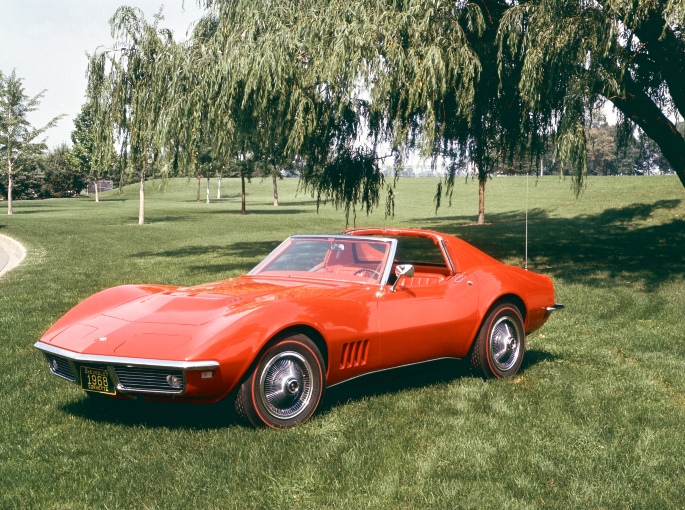 The C3 debuted for the 1968 model year. It closely resembled the second-run Mako II concept car shown to the public in 1965. It became known as the “Coke bottle” design for its sharp front end, upward-angled front fenders, slim midsection, and large swept rear fenders.

Production models were essentially a marriage between the previous generation Corvette and the Mako II concept model. It was not as sharp and aggressively styled as the Mako II, but the chassis, suspension, and even some engine options remained the same.

Naturally, it was produced with a fiberglass body.

The C3 came as a coupe or convertible. Corvette convertibles could be had with a removable hardtop while Corvette T-top coupes had removable roof panels and rear window. A “sugar scoop” design replaced the originally proposed fastback design, creating a vertical rear window with buttresses sloping from the roof to the rear on either side.

As with many new vehicle redesigns, the first year of the C3 Corvette was met with criticism from the media. Build quality, styling, and other things were critiqued harshly. But by the second year, GM had worked out many of these issues.

Enthusiasts had embraced the new C3, and sales numbers were proving it. 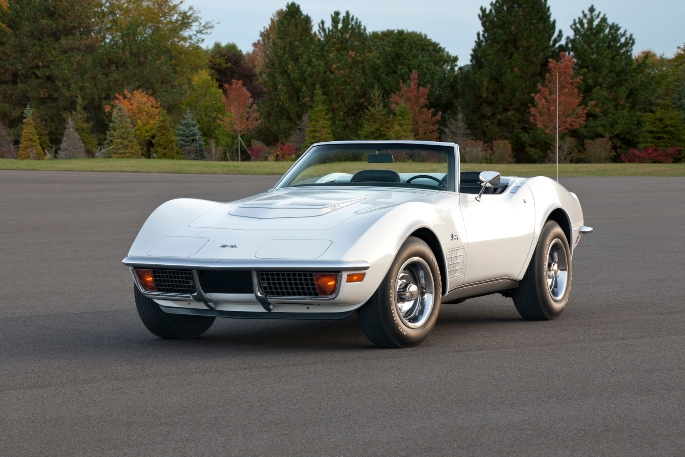 The 1970 to 1972 C3s continued to see small developments which ultimately made the ‘Vette a better vehicle, though build quality was reportedly still a major concern. By 1972, it was clear that change was on the horizon.

Interior changes were also minor but attempted to create a more inviting atmosphere for the passengers. Increased headroom, wood-grain trim, and door to door carpeting.

1971 saw stricter emissions regulations and started the trend of weakening engine outputs. The LT-1 notably dropped from a reported 370 horsepower to 330 horsepower while the LS5 saw its horsepower rating fall to 365. Another new 454 cubic inch engine, the LS6, was offered for 1971 which produced 425 horsepower. It replaced the canceled LS7 engine from the previous year.

The ZR1 and ZR2 racing packages were available to the public. The ZR1 featured the LT-1 small-block engine and the ZR2 was paired with the LS6. Both included an upgraded suspension, upgraded radiator, and a special close-ratio four-speed transmission.

Emissions further choked the engine options for 1972. The ZR2 package was no longer offered because the LS6 was discontinued. The base ZQ-3 engine only produced 200 horsepower while the LT-1 was downgraded to 255 horsepower, and the LS5 produced 270 horsepower.

The three-speed manual transmission was also dropped in favor of a standard four-speed manual for the 1972 model year.

1972 went out with a bang and signaled changing times for the C3 Corvette in the coming years. 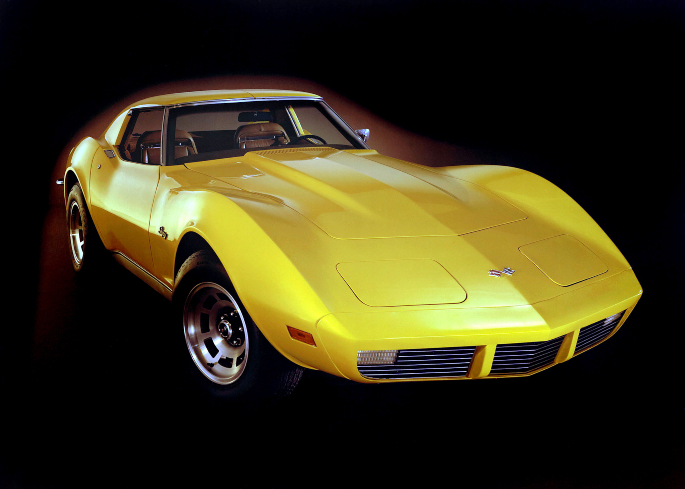 The 1973 C3 came with some significant changes. It would be the 20th anniversary of the Corvette and mid-cycle refresh was in order.

Though the front-end design had not changed, the iconic pointy chrome nose and grille were replaced by safer urethane bumpers. The egg-crate fender vents were replaced with a single vent cutout. The vacuum-operated windshield wiper panel was gone and the hood was extended to obscure the wipers. The removable rear window was now fixed in place.

1973 was the only year in which a chrome bumper was affixed to only the rear of the Corvette.

1974 saw a full change to impact bumpers on the front and back of the car. Rear bumpers were angled downward as opposed to the upward-pointing trunk lid which had always housed the round iconic Corvette taillights. Fender flairs extended out to give the profile a more aggressive look.

An upgraded radiator, automatic transmission, and power steering pump were all fitted for 1974 models.

Radial tires, steel door beams, lap and shoulder belts, and safety bumpers were equipped to meet increasing federal safety standards. Cabin noise deadening was added to provide better comfort while traveling, a move that further solidified its place as a developing grand tourer rather than a hard-core sports car with muscle.

Emissions regulations continued to erode this mentality in 1974.

Even though the big-block engine outputs of the late ’60s made the ’73 and ’74 offerings look tame at best, the emissions regulations and OPEC oil embargo affected everyone. The Corvette still offered an increasingly luxurious driving experience with a good amount of comparable performance. Despite itself and its struggles, sales numbers were stronger than ever. 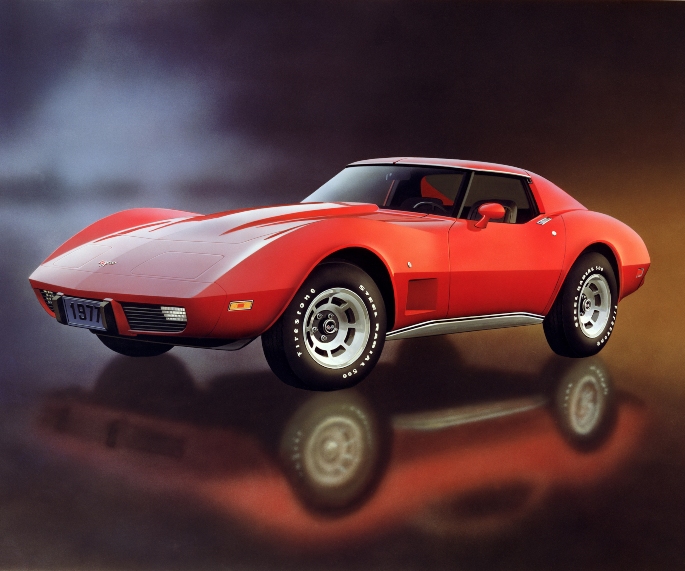 1975 marked the beginning of the true transitional years for the third-generation Corvette C3.

It was the first Corvette to have a catalytic converter fitted to the car, the first year a true dual exhaust setup was not equipped, and the first year a big-block engine option was not offered. 1975 was the last year that the convertible models were produced for this generation.

The front and rear bumper designs were slightly altered from the previous 1974 ‘Vette to decrease accident damage, and two pads on either side of the bumpers were added for additional bumper support.

The Stingray badge was removed from the Corvette in 1977 and replaced with the current racing flag emblem present on Corvettes today. The radio, climate controls, and dashboard gauges were all restyled to add functionality and simplicity with leather seating becoming standard.

Despite the increasing cost to buy a Corvette – up to $10,000 for fully-equipped models – sales numbers soared over the previous years. 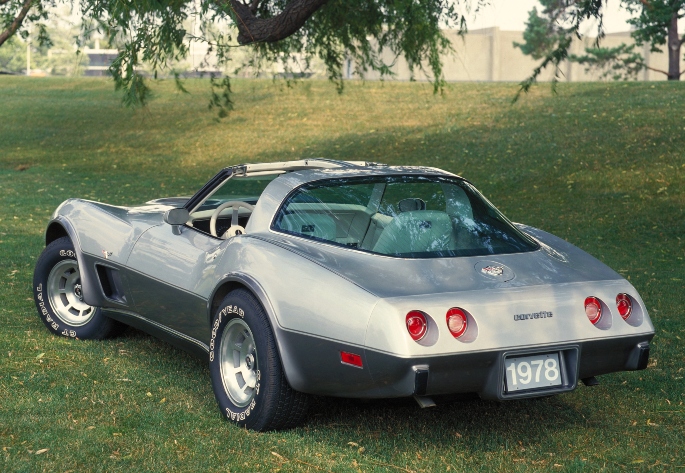 The economy was recovering, the oil crisis was over, and the Corvette was returning record high sales numbers. David McLellan had not fully gotten involved with the continuing evolution of the C3 Corvette, but subtle changes continued marching the Corvette forward into 1978 and 1979.

1979 was the Chevrolet Corvette’s 25th anniversary. As such the Silver Anniversary Edition was offered to buyers but was little more than a special silver over gray paint scheme with a pinstripe, special anniversary badging, sport mirrors, and aluminum wheels.

An Indy 500 Pace Car version of the Corvette was also created as part of the celebration and featured the opposite black over silver paint scheme from the Silver Anniversary Edition. Front and rear spoilers, special interior colors, and revised leather seating were part of the Corvette Pace Car.

Regular Corvettes were offered with both anniversary package options with replica paint schemes and features.

The base small-block L48 produced 185 horsepower, and the L82 produced 220, which could be exclusively paired with a close-ratio four-speed manual or an upgraded Hydra-Matic three-speed automatic transmission. 1979 models received small horsepower increases to 195 and 225 horsepower.

Critics praised the 1978 and 1979 Corvettes for their revised styling and good performance for the day, while the special editions were a big hit among consumers. The 1979 Corvette turned out to be the best-selling Corvette of all time despite its first-ever $10,000 price tag to close out the 1970s. 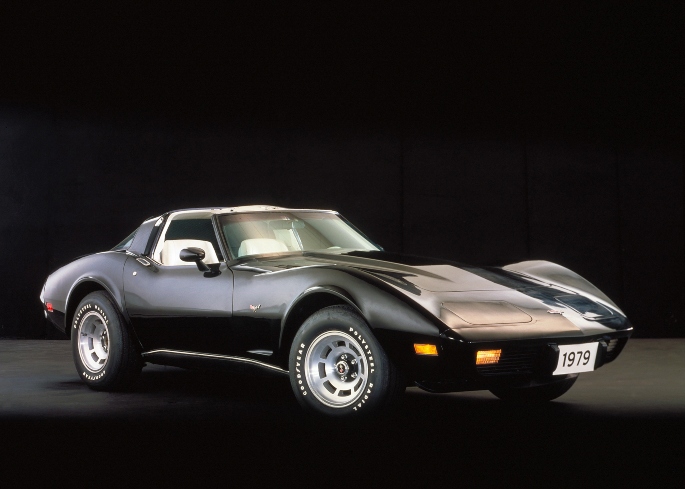 The late ’70’s Corvettes may have been a huge sales success for GM, but the C3 was going on 12 years of production without a major refresh. Because of this, the last piece of the C3 Corvette puzzle was put in place by the final 1982 C3 Collector Edition before the next-generation C4 Corvette would start the next chapter.

Economic woes and another fuel shortage again took their toll on what the Corvette would become in the next few years. One bright spot in Corvette history shined through in 1981 when production moved from St. Louis, Missouri, to Bowling Green, Kentucky, proving instrumental in better build quality that had been lacking in C3 Corvettes for years.

The early ’80’s Corvettes maintained the same general sharp, aggressive look as previous years but with a smoother, more rounded front fascia and grille. Weight loss was a priority, and the use of aluminum and other revised materials throughout the car helped.

The ‘Vette received a federally-mandated 85-mile-per-hour speedometer, the Corvette flag emblem was removed from the fender, and a revised hood was fitted as well.

Starting the next year, a single engine, called the L81, replaced both the L48 and L82 engines. It produced 190 horsepower, 280 lb-ft of torque, and featured stainless steel exhaust manifolds with additional cooling from an electric fan.

Computer Control Command was introduced to help with emissions by controlling ignition timing and the air-fuel mixture within the engine. Additional paint options were also added, including several two-tone paint schemes.

1982 was the last year of the C3. It bridged the gap between the current car and the future C4 by sporting the C4’s future fuel-injected 350-cubic-inch L83 V8 engine. It produced 200 horsepower and 285 lb-ft of torque. Unfortunately, a manual transmission was not available for 1982 models with a four-speed automatic being the only option.

The “shark” model C3 Corvette had a huge impact on the automotive industry throughout its fifteen-year tenure. Its futuristic and stylish design was and continues to be one of the most recognizable in American history.

Though it did not change that much from year-to-year, its transformation from 1968 to 1982 is quite evident. Emission standards, economic downturns, and fuel shortages dictated what the Corvette would be from one model year to the next. Despite this, it survived, and it went on to set sales records still unbeaten today.

Its longevity, adaptation to ever-stringent regulations and evolved styling have all made the C3 one of the more popular Corvettes. Some aficionados even believe its performance relative to the models of today make it less desirable than it should be on the collector market.

Values are starting to rise, though, and the C3 is well-known as a good platform with which to work, improve, and ultimately enjoy as a true iconic Corvette.

Next Up: Corvette C4