The C7 Corvette took a few of its general design cues from the previous C6 Corvette, including keeping the exposed headlights.

However, much of its styling was a dramatic departure from all previous models. Its look was highlighted by a more muscular and angled front end and taillights that deviated from the traditional arrangement of two sets of round lenses.

The first C7s hit the market in the third quarter of 2013; the last of the C7s were sold in the first half of 2019. It is widely expected to be the last front-engine Corvette in light of its successor -- the C8 -- moving to a mid-engine layout.

Development of the C7 Corvette 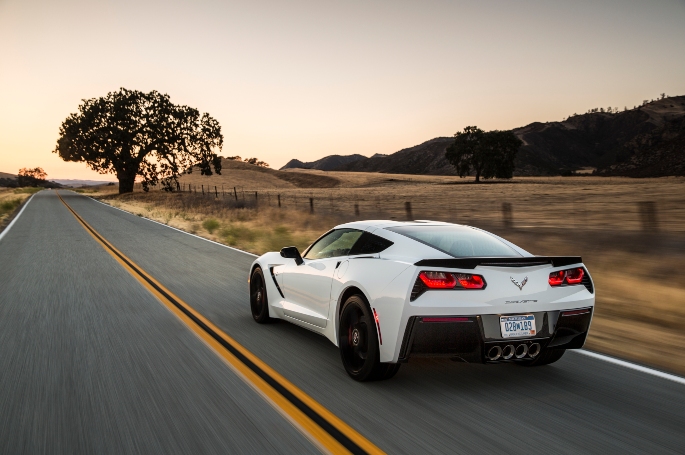 Chevy began the C7 development in 2007, but the financial crisis and General Motors' bankruptcy delayed the model considerably; it wasn't until late in 2012 that Chevrolet announced that the C7 would debut in January of 2013. It was originally set to debut as a 2011 model.

The C7 almost became the first Corvette with a mid-engine layout, but potentially high development costs (when G.M. had little expendable capital) kept the C7 in the traditional front-engine / rear-wheel-drive setup.

The C7 instead featured a new 6.2-liter small-block V8 engine that made 455 horsepower and 460 lb.-ft. of torque in base form. A seven-speed manual transmission was offered as well as a six-speed G.M. automatic. The small-block V8 included a cylinder deactivation system for fuel management and continuously variable valve timing.

The new powerplant helped the C7 to accelerate from zero to 60 in 3.8 seconds.

The suspension on the C7 was an independent double-wishbone setup with unequal length, plus transverse fiberglass mono-leaf springs.

As previously mentioned, the C7 took its styling in a different direction from all previous generations, despite keeping a few elements such as the exposed headlights.

Perhaps the biggest difference was the squared-off rear end and non-round, trapezoidal taillights that were similar to those on the Camaro at the time. The aggressive and angular appearance was a source of disappointment for many Corvette fans, though G.M. said it was a deliberate move aimed at attracting a younger audience than traditionally bought Corvettes.

The C7's rear end was also highlighted by four tailpipes mounted at the center of the lower bumper. Along with the aggressive back end, the C7 featured a large number of creases and vents around the body for aerodynamics. This was a large design departure from previous generations that had streamlined styling with few creases save semi-functional gills. Even the new exposed headlights had a more intricate and angular design than the C6 Corvette. 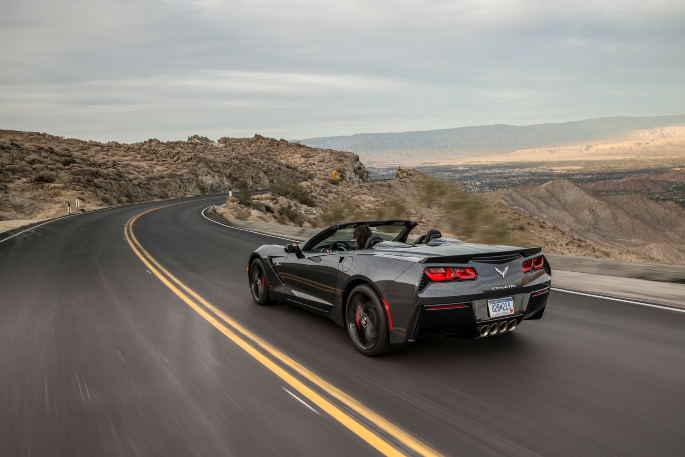 The new C7 Corvette featured a carbon fiber hood and then fiberglass composite for the majority of the rest of the car. Aerogel developed by NASA was used to stop transmission heat from getting into the cabin. Panels on the underbody were made from carbon-nano composite while the chassis was constructed from hydro-formed aluminum. Indirect LED technology was used in the formation of the taillights.

Despite the full use of light materials in constructing the C7, it wasn't any lighter than the previous C6 generation.

The 2014 Corvette offered the following models and special editions: 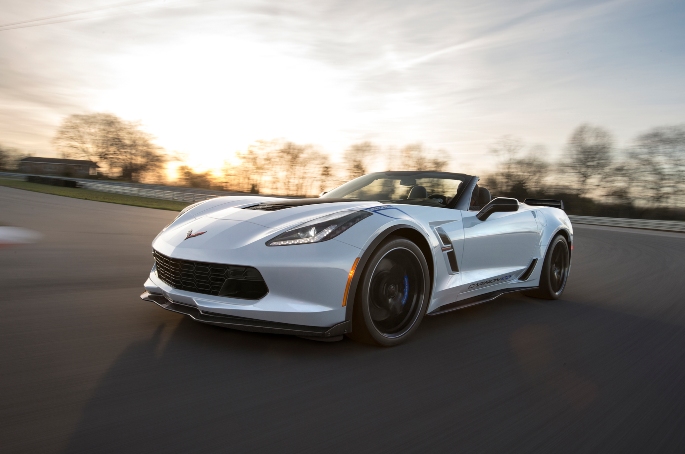 The 2015 C7 model year saw the introduction of an optional eight-speed automatic transmission for all models.

The new Corvette Z06 was reintroduced for this year as well. It featured a new 6.2-liter supercharged V8 engine that made 650 horsepower and 650 pound-feet of torque. For this generation, Chevy made the Z06 available in both a coupe and a convertible.

The 2015 Corvette offered the following models and special editions:

The last model in this list was a racing version of the Chevrolet Corvette Z06. It included a 5.5 liter naturally aspirated V8 engine, which was made specifically for this model. It had 491 horsepower and a modified suspension to allow for wider tires and a larger brake system. 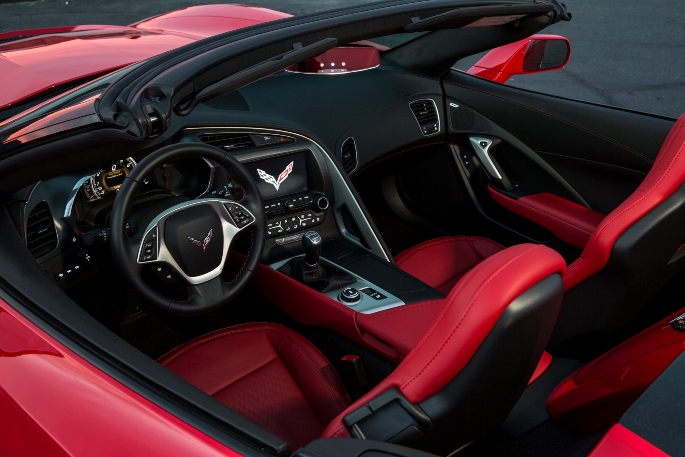 This model year saw the phasing out and removal of four colors and the addition of one color. Daytona Sunrise Orange Metallic was removed in December 2015. January 2016 saw the removal of Night Race Blue, and then Shark Gray was removed some months later in May.

The end of 2016 saw the removal of Laguna Blue, which was replaced by a new color called Admiral Blue. Only 336 total C7 Corvettes were made in this color, including 221 Stingray models and 115 Z06 models. Otherwise, nothing else for this year was changed.

The following models and special editions were released for the 2016 model year:

The special design packages were all available on 3Lx trim models and included different options for Z06 and Stingray models. Despite the color names of the packages, each package had several choices in actual exterior colors for the car. The last special edition was only available with the 3LZ trim and was mostly an appearance package despite the name. However, it ended up being fairly rare as only 650 cars were produced between the coupe and convertible editions. The convertible was the rarest at only 80 produced. 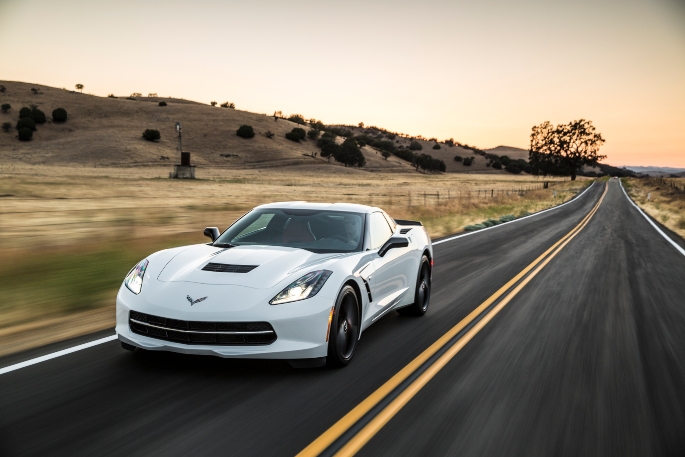 Nothing significant was changed for the 2017 model year; a total of 32,782 C7s were produced. This year did see the introduction of the brand new Grand Sport model, which was a mix of the Z51, Z06 and the Stingray components and body styling (the body style was mostly modeled on the Corvette Z06).

The Grand Sport also had a Heritage Package, code-named Z15, that included various additional design features and six available colors. Finally, there was also a Grand Sport Collector Edition, code-named Z25. These were limited to only 1,000 vehicles and 850 of those were released in the American market. This edition was mostly cosmetic with special interior designs. 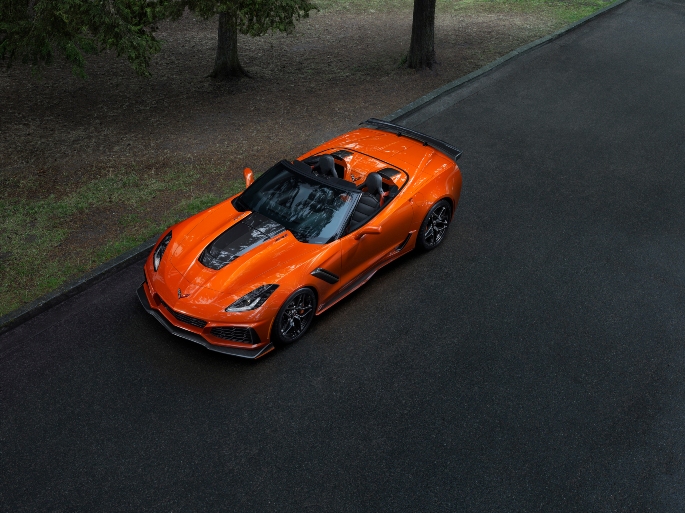 The 2018 model year began production in 2017 in June. It was discontinued at the end of July due to a plant shutdown that lasted until October. This model year saw the continuation of the Stingray, Grand Sport and Z06 models.

This was also the year Chevy announced the ZR1. Like the Z06, it too used a supercharged 6.2-liter V8 engine, but it made 755 horsepower and 715 pound-feet of torque. The ZL1 came with a seven-speed manual transmission or an eight-speed automatic. It was further differentiated from lesser Corvettes with unique carbon fiber bodywork that was aimed at providing more cooling to the car's systems, plus a large rear spoiler. Other upgrades included Brembo carbon-ceramic brakes, a unique exhaust system and unique wheels. Initially, the ZR1 was only revealed as a coupe, but a convertible version was eventually revealed as well. 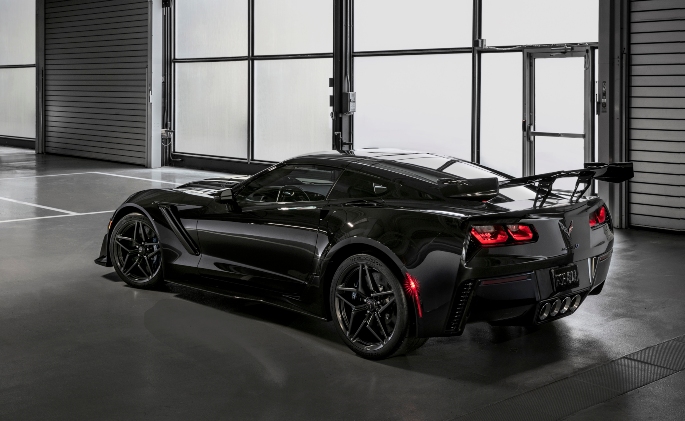 Nothing significant was changed during this year, but there was yet another special edition in the Carbon 65 or Z30 Edition. This limited edition was made to commemorate the 65th anniversary of the Corvette. It was available in a new color of Ceramic Matrix Gray and could be had via the convertible and coupe body styles of either the Grand Sport 3LT trim or the Z06 3LZ trim. Most everything in this special edition was cosmetic.

A special edition was released in this model year called the Driver's Edition of the Corvette Grand Sport. It included four different paint schemes chosen by the drivers on the Corvette racing team.

Next Up: Corvette C8