The Corvette C5 is the fifth generation of the Chevrolet Corvette that was produced between 1997 and 2004. The cars were a significant update over their predecessor, the Corvette C4, and featured an all-new engine, a new frame, updated transmission location, and completely different styling. The C5 was sold as both a Corvette coupe and a Corvette convertible, but first-year cars were only offered in coupe format.

As an overhaul of the previous generation Corvette C4, the new C5 had very few parts in common with older versions of the car. It also did not share parts with any other GM product, as Chevrolet’s engineers took the opportunity to push the boundaries of performance and technology. The resulting car was regarded as being drastically better than before.

The cars featured several innovations that were considered high-tech at the time. The C5 was used to test out several technologies that were used in other vehicles later on. Standard ABS and traction control were both features that weren’t particularly common at the time. A heads-up display was offered that projected vehicle information onto the windshield, and an Active Handling System was introduced as an option in 1998 before becoming standard in 2001.

The C5 was the first Corvette to feature drive-by-wire throttle, where the vehicle's acceleration is driven by an electronic sensor and gears, rather than through a mechanical pedal and linkage. Variable effort steering was also used, which changes the level of power steering assist based on the speed of the vehicle. 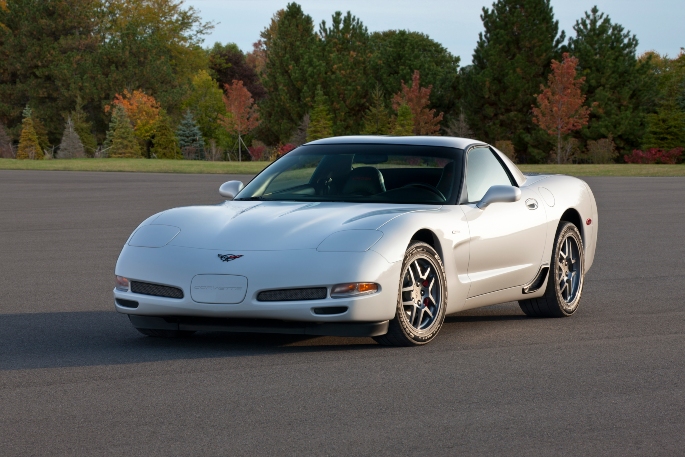 The Corvette C5 debuted with an all-new GM 5.7-liter V8 engine, dubbed the LS1. IT was rated at 345 horsepower and 350 pound-feet of torque. The C5 was the first vehicle to use the engine, but it went on to be used in the Camaro and Trans Am. The LS1 was also used as the foundation for other higher-performance variations at the time. The LS6 was based on the LS1 and was used in the Corvette C5 Z06, the Cadillac CTS V-Series. The powerful engine was enough to make the Chevy Corvette competitive with most vehicles at the time, even supercars, helping the car reach a 0-60 mph time of around 4.5 seconds.

The C5’s transmission was changed as well. All previous Corvettes had the transmission mounted at the rear of the engine but was relocated for the Corvette C5 to become a transaxle. It was located between the rear wheels, which gave the new car better weight distribution and improved handling.

The Corvette C5’s chassis was completely redesigned from previous versions of the car. The previous multi-piece welded frame was replaced with a one-piece hydroformed chassis with a composite balsa-core floor and cast aluminum windshield frame that added a great deal of rigidity. It was so stiff that no extra supports had to be added to make the convertible handle well.

The C5 was produced and sold for most of its lifespan with few changes to the fundamentals of the car. The engine became more powerful, more options packages were offered, and there were cosmetic updates, but the car did not change significantly.

Despite the engine’s large displacement and power, the Corvette C5 achieved decent fuel economy numbers – 18 mpg city and 25 mpg highway with the automatic transmission. Those ratings helped the C5 avoid the gas guzzler tax that many other vehicles in the class are faced with. The Corvette C5’s low curb weight of under 3,300 pounds and the low drag coefficient are thanked for boosting the car’s fuel economy and for making it the most fuel-efficient Corvette yet. 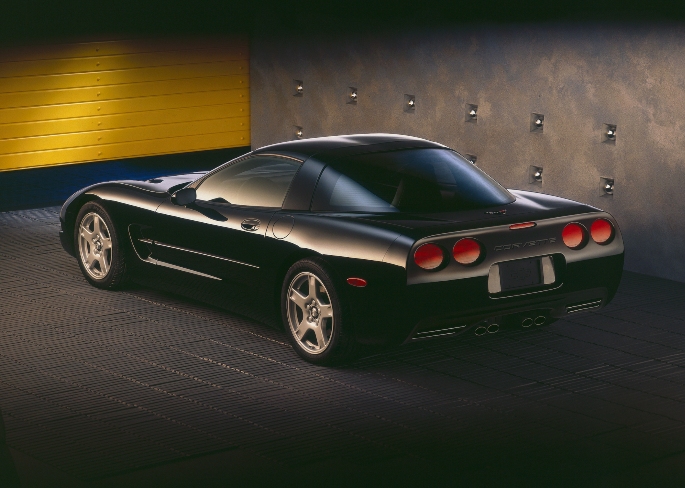 For the 2001 model year, Chevy introduced a high-performance version of the C5, called the Z06 Corvette. It was the successor to the ZR-1 and was named after the Z06 version of the Corvette C2 from the 1960s. The new Z06 had a tuned version of the LS1 engine that produced 285 horsepower, which was less than the ZR-1, but thanks to the new car’s lower weight, it outperformed the old car in nearly every way – save for top speed.

The C5 Corvette Z06 was offered with only a six-speed manual transmission and had several modifications to make it faster than the base Corvette. It was based on the most rigid version of the Corvette C5, the hardtop coupe, which greatly improved handling. Further bumping the sporty ride quality, Chevrolet’s engineers fitted the car with upgraded FE4 suspension, larger wheels and tires, different gear ratios, and brake cooling ducts. Weight was cut from the standard C5 as well, with the Z06 making use of a titanium exhaust, thinner glass, lighter wheels, reduced sound insulation, and a lighter battery.

After just one year of production, power was bumped in the Z06, up to 405 horsepower and 400 pound-feet of torque, as the LS6 was modified with a larger air intake, stiffer valve springs, and more aggressive camshaft timing.

In 2004, a special edition Z06 was released, called the Z16. It used a carbon fiber hood, aluminum wheels, special paint, and special edition badges. The car also had specially-tuned shocks that improved handling. Despite being a special edition, the Z16 made up most of the Z06s sold in 2004.

At the time, the Corvette C5 was improved, noted by reviewers as being a remarkable improvement over the C4 that came before it, without being a radical departure from the Corvette formula in general. Car and Driver, in its review, said that the Corvette C5 had gained some “latitude,” which meant that the car was finally capable of generating broad appeal outside of just Corvette lovers. The C5 was reviewed as being much more user-friendly, more comfortable, and more able to be used as a daily driver.

The Corvette C5 was praised as being the first version of the American sports car that blended all-out speed with usability, and it won over many critics at the time. The C5 was regarded as being balanced and precise, with an effort to take driver comfort into account, rather than just being fast at the expense of all else. The original price tag of over $38,000 meant that it was still an exclusive affair, out of reach for many, but for those that could afford it, the Corvette made a lot more sense than it ever had before. 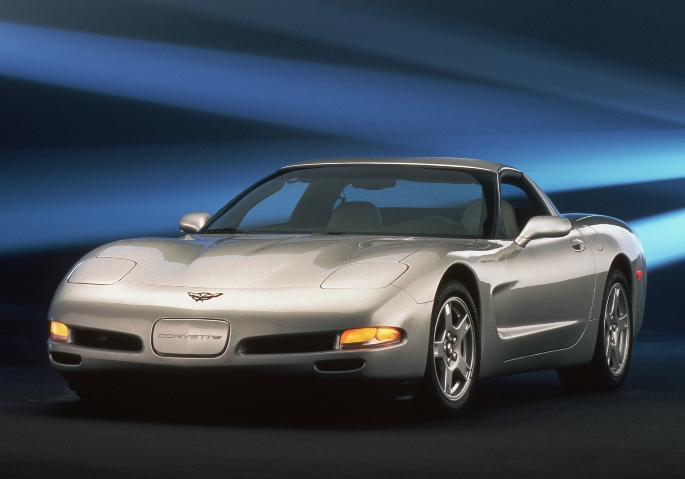 The C5 was produced in relatively high numbers throughout its lifespan – nearly 250,000 - which means that there aren’t many versions of the car that are considered rare or “special.” Only one engine was used for the standard Corvette C5 (LS1) and only one for the Z06 (LS6), which makes it different than Corvettes before it that had rare cars with special engine options.

Because of its production volume, there is still a good supply of used examples available today The convertibles and Z06 models are considered to be the most desirable, but early coupes can be had for less than the price of a new Corolla today. The first coupe models sell for $15,000 and less with convertibles just slightly more expensive than that.

Z06 cars from the later years are a bit more, hitting the mid-$20,000 range. Some regard the Corvette C5 as one of the best used performance bargains on the market today. For less than $25,000, buyers can find a car that runs a sub-12-second quarter mile. That, coupled with the vast aftermarket support, make the cars very popular with racers and used car buyers.

Indianapolis 500 Pace Car
The 1998 Corvette C5 Convertible was chosen as the Indianapolis 500 Pace Car, and a replica was offered for sale as a result. Other than the safety equipment that was fitted to the official Pace Car, there was no functional difference between the replica and the original. The Pace Car Replica Package came with special paint colors, yellow-painted wheels, and decals. The cars also came with luxury entertainment features like a Bose sound system, upgraded dual-zone climate controls, and leather upholstery. The Pace Car Package is widely regarded as being one of the more controversial and over-the-top appearance packages ever offered on a Corvette.

50th Anniversary Edition
2003 marked 50 years of Corvette production, and Chevrolet created a special edition C5 to commemorate the occasion. The cars were available as either a convertible or coupe and were offered in only one color – Anniversary Red Metallic. Anniversary Corvette C5s also came with magnetic ride control, painted aluminum wheels, and special badging.

Motorsports
The Corvette C5 was used extensively for racing applications during its lifespan. The C5-R was a race car based on the standard Corvette that was built by Pratt & Miller for GM Racing. It had a longer wheelbase, wider track, and a larger 7.0-liter V8 engine.