Updated 7/19/19:
Chevrolet has finally revealed the production 2020 Corvette C8. Here’s what we now know about this all-new midengine sports car: 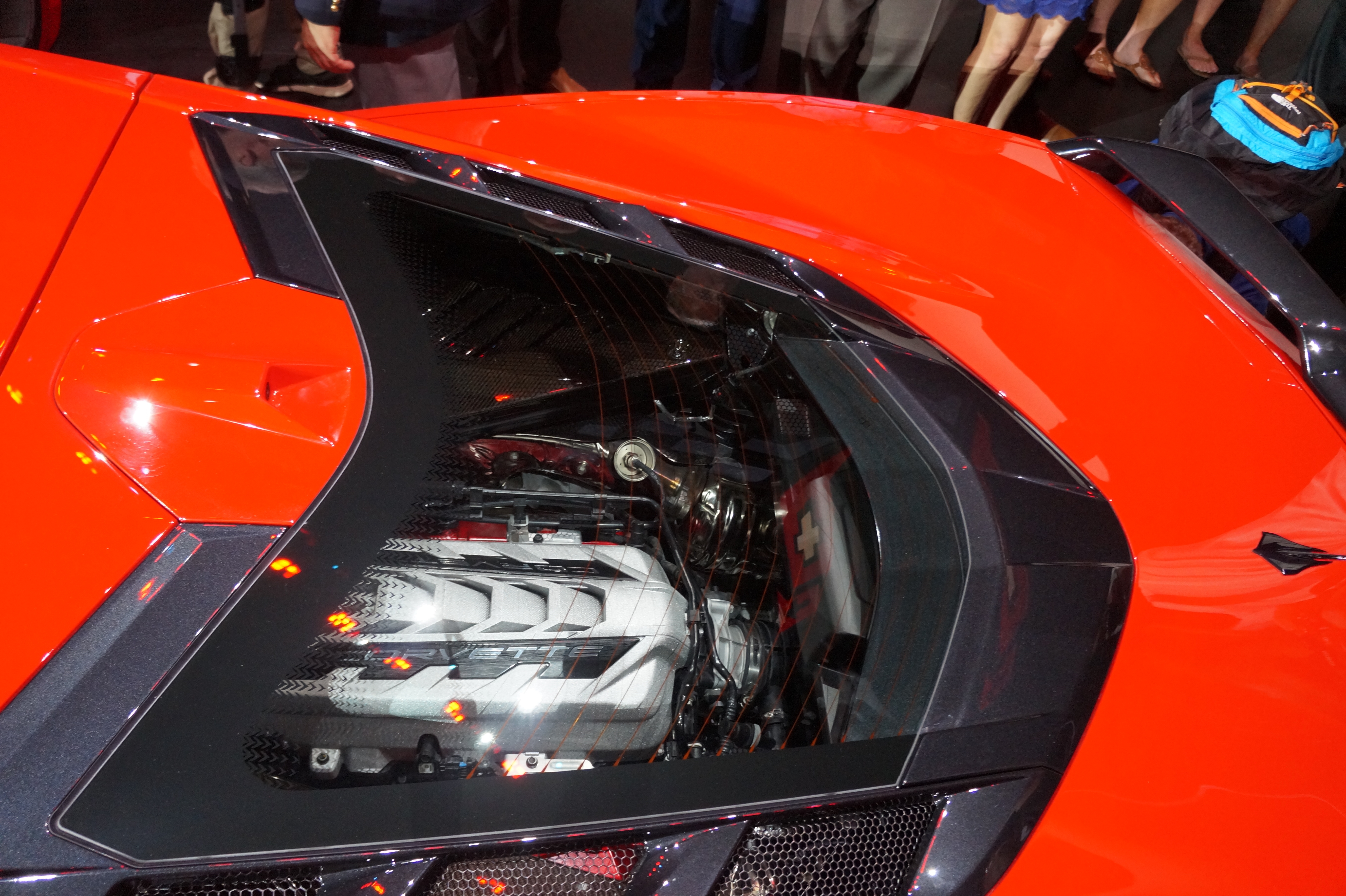 This engine is mounted directly behind the passenger compartment. It’s connected to an eight-speed dual-clutch automated transmission with paddle shifters. 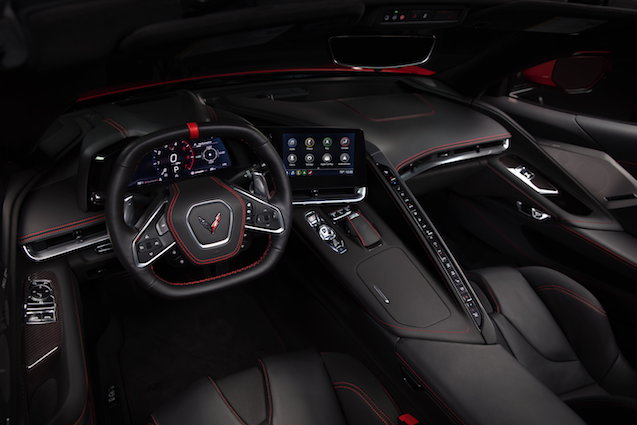 The C8 seats two people. The instrument panel is a configurable 12-inch digital display. A touchscreen is mounted to the right of this and it controls the infotainment system. A long column of buttons for functions like the climate control runs down from the top of the dashboard to the bottom of the center console.

The C8 has a pair of trunks with a total of 12.6 cubic-feet of cargo space. There’s a small cargo area at the front of the car and a larger, deeper one at the rear. Chevrolet says owners will be able store two sets of golf clubs in the rear compartment. 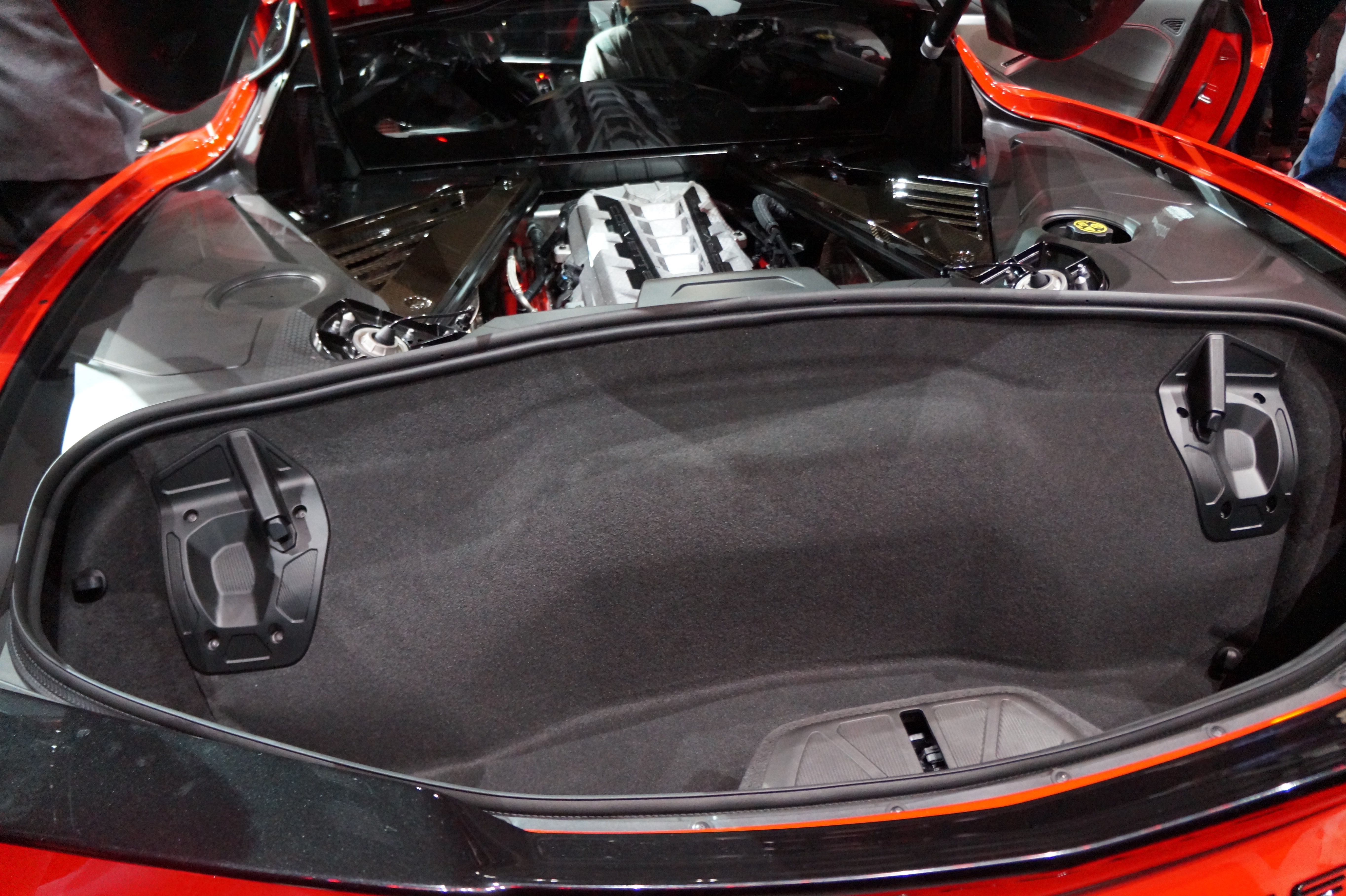 As has been Corvette’s long-standing tradition, there’s a standard removable roof panel that stores in the rear trunk when not in use.

The C8 will also be available with a front-end lift system to clear things like speedbumps and steep driveways. The system will raise the nose of the car 40 millimeters and Chevy says owners will be able to link it to the car’s GPS to remember up to 1,000 locations where the lift will function automatically. 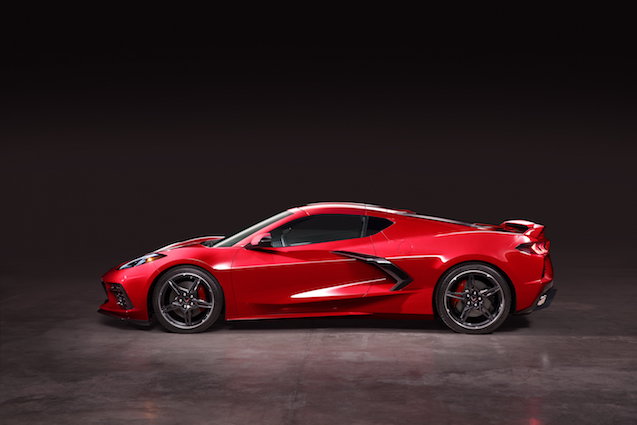 The main structure of the chassis is made from six pieces of diecast aluminum. The curved rear bumper beam is made from carbon fiber, which Chevy says is an industry first. 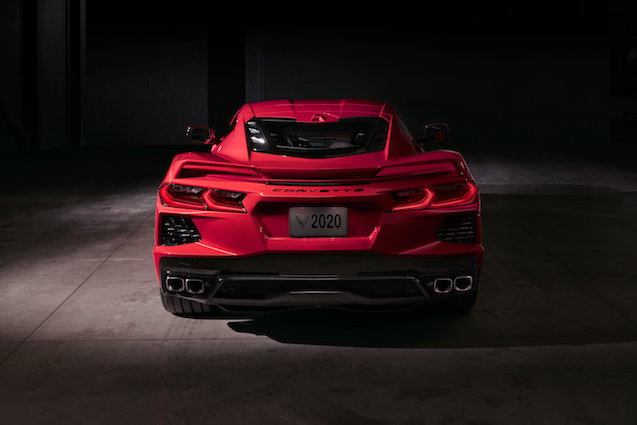 The C8 will initially be available with this new performance package. In addition to the added power boost, the Z51 upgrade will also come with larger brake calipers, an enhanced cooling system, different axle ratio, front brake cooling ducts and a performance exhaust.

Chevrolet hasn’t announced pricing on the C8 yet but it has confirmed that the base model will start at under $60,000 (so figure around $59,999). Production will start at Chevy’s Bowling Green Assembly plant in late 2019; expect early models to be available in early 2020.

The 2020 Chevrolet Corvette, also known as the C8 Corvette, is an upcoming model of the brand’s two-seater performance car. Though spy photos and rumor articles have been circulating about the car for months before any official news, Chevrolet announced that the car would be formally unveiled at an event on July 18th, 2019.

It was also driven through the middle of New York City in a teaser event several months ahead of its launch with the car’s unveiling date stamped on its side. 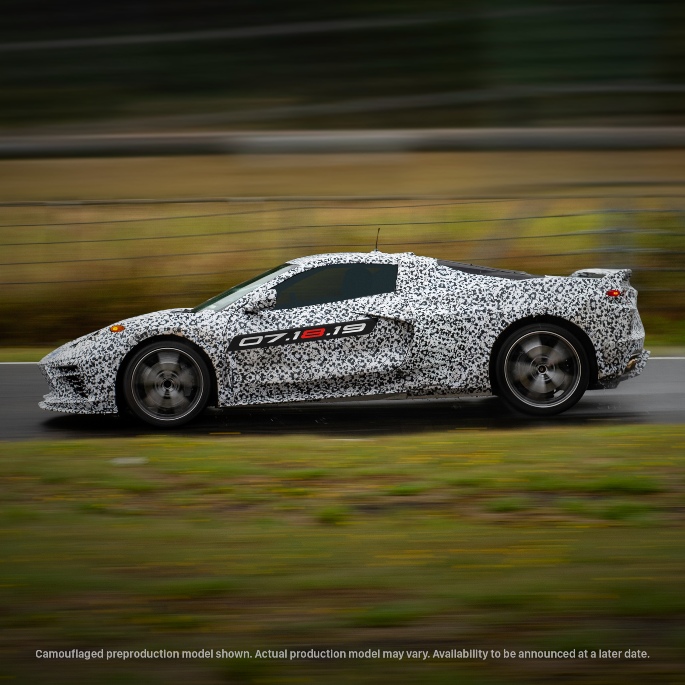 The C8 will feature a mid-engine design, which is a first for the Corvette, previously only offered in front-engine, rear-wheel-drive configuration.

The mid-engine configuration allows the car to generate more power while maintaining traction than a traditional front-engine layout does. With the engine between the axles, weight distribution is much more balanced in the car, which significantly improves handling and cornering abilities.

The mid-engine layout also opens up a possibility for Chevrolet to include an all-wheel-drive system in the car, adding an electric motor to the “front trunk” area. In what could be an upgrade over “base” C8 models, the electric motor would drive the front wheels for on-demand traction.

The C7 Corvette’s high-performance versions, the Z06 and ZR1, have been noted as being fantastic sports cars. Some critics have mentioned that there is too much power for the car to be truly useful on the track without significant driving experience. Even with driver aids like traction and stability control, the lack of weight over the rear axle can present challenges in keeping grip and maintaining speed in performance driving situations. With a mid-engine layout, the Corvette’s driving dynamics will change significantly, and traction should improve as weight is moved rearward in the car.

This change is something that Chevrolet has had in the works for decades, as there have been prototypes that are known to date back as far as 1970.

In the mid-80s, Chevrolet debuted the Corvette Indy concept, which had a mid-engine setup, a twin-turbo V8, and all-wheel drive.

Years later, in 2002, the Cadillac Cien concept was shown at the Detroit Auto Show. That car was also mid-engine with a 7.5-liter V12 that produced 750 horsepower. The engineers at Chevrolet had determined that the Corvette was at its peak, in terms of the amount of power and grip that could be delivered with a traditional front-engine, rear-drive layout. The massive recession of 2008 and its subsequent shockwaves caused the company to put the project on hold and eventually cancel it altogether. 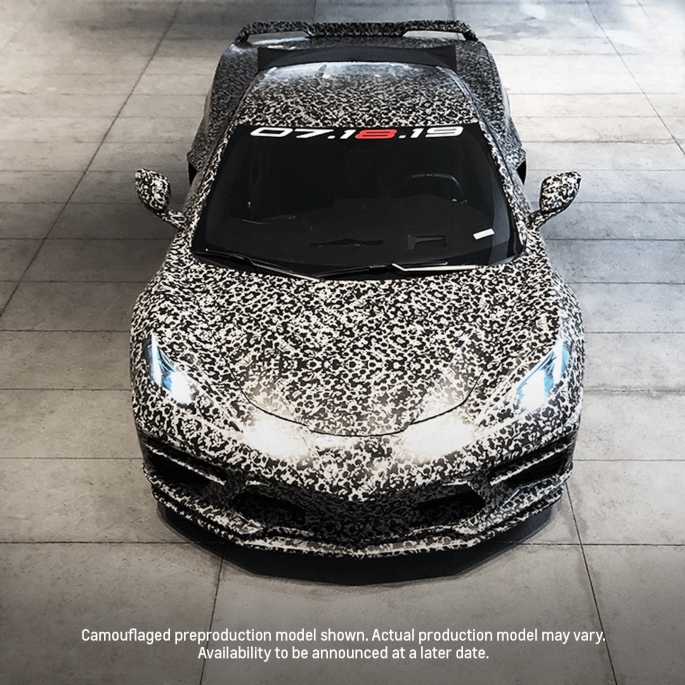 The C8 has been spotted several times conducting road tests in different parts of the country. In one such test, the Corvette was being tailed by a Porsche 911 Turbo S, a sign that Chevrolet is benchmarking its new C8 against cars that have traditionally been considered faster on the track. The mid-engine layout for the new Corvette also places it in a league of cars that have been reserved for brands like McLaren, Ferrari, and Lamborghini, whose supercars have long featured engines in between their axles. The mid-engine Corvette will join a very small number of American supercars and would be the only one with the mass-production muscle of a brand like GM.

Moving the engine behind the cabin will also result in a significant styling change for the C8 Corvette. Since the Corvette C2, the car has featured a long nose with a cabin located much closer to the rear axle than the front. The mid-engine layout will move the passenger compartment forward to accommodate the drivetrain components, which shortens the length of the hood. The rear of the car is also bulkier as a result, with large air vents on either side of the doors to help cool the engine. Spy photos show that the C8 will retain some of the Corvette’s traditional styling, as the quad taillights and nose look similar to the current C7 car.

Spy photos of the next-generation C8 have shown what appears to be two lines to separate the car’s roof from the rest of the body. This could mean that the new car will have a targa-style roof, with removable panels, similar to the non-convertible C7’s current setup. All Corvettes since the late 1960s have featured this roof style, except for two Z06 models and the ZR1. We don’t yet know if the C8 will be available as a full-on convertible when it launches.

Since the cars that have been spotted have all been covered in a great deal of camouflage, we don’t know exactly how the Corvette C8’s lines and curves will play out. We do know that GM has filed patents for new parts and design elements, like an engine cover for a car with a mid-engine layout. The new cover is made of glass and features venting around the outside to aid in cooling for the engine that would be mounted behind the passenger compartment. Prototypes that have been spotted so far have either featured an open engine area or one that has been covered in mesh.

The C8’s pricing, according to Hagerty, will include an updated version of the C7’s V8 engine. The new powerplant will likely be named the LT2 and should be rated somewhere around 500 horsepower. Further investigation by Hagerty has shown that Chevy may be working on a more powerful version of that engine for higher-spec trims of the C8, possibly to include a twin-turbo overhead-cam V8 or one with a flat-plane crankshaft.

While the current C7 Corvette comes standard with a seven-speed manual with the option to upgrade to an 8-speed shiftable automatic transmission, Car and Driver and Road and Track have reported separately that the C8 may only be available with a dual-clutch transmission. If true, the move would make the new Corvette the first without a manual transmission option. 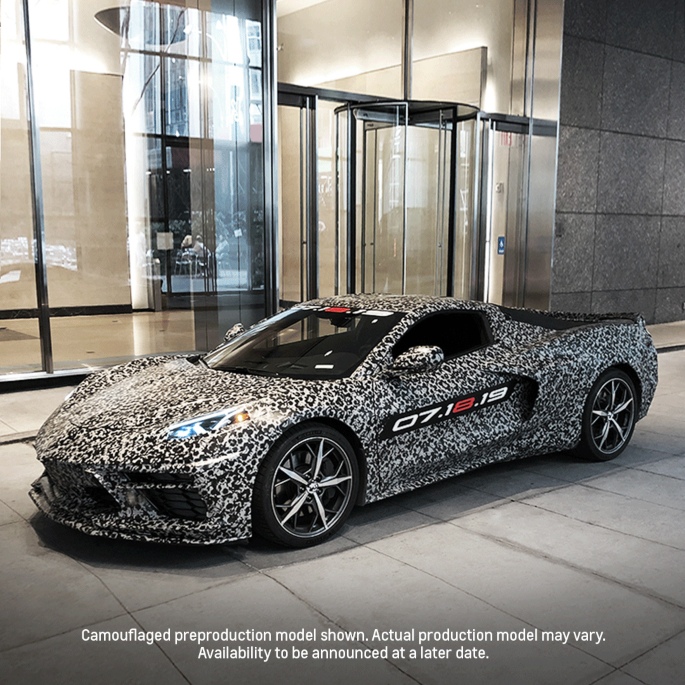 Racing has been a big part of the Corvette’s bloodline, and that will continue with the new C8. The car has been spotted testing on race tracks, potentially in preparation for the 2020 racing season. Pratt and Miller, the company responsible for building all other Corvette race cars since the C5, will again build the C8 model for entry into the IMSA WeatherTech Series. Spy photographers at the race testing sessions also captured audio of the C8 race car and report that the engine used in track testing produces a significantly different sound than the ones heard from the C8’s road-test sightings. This has created speculation that racing-specific versions of the new car will use a V6 or a type of flat-plane V8.

What’s in a Name?

At least one version of the C8 is rumored to be named “Zora,” after Zora Arkus-Duntov, the GM engineer that drove much of the early Corvette’s creation. Chevrolet has trademarked the name in several countries, including the US, the UK, China, Japan, and Australia.

Zora, the person, is known as the “father of the Corvette,” even though he didn’t create the car, and was a notably successful racing driver. There is speculation that the “Zora” name will be used for higher-performance versions of the new Corvette, and that the base model will keep the Stingray name that the current C7 Corvette’s base versions use.

The unveiling itself is newsworthy. Mary Barra, GM’s CEO, announced the debut at an event to honor firefighters and first responders killed in the World Trade Center attacks on September 11th, 2001. The media will be on hand to cover the new car and select Corvette owners and members of the public have been offered tickets for the chance to see the C8.

The National Corvette Museum placed a C8 event package up for bid on eBay recently, which included tickets to the event, a two-night hotel stay, and an invite to a special “Expo” hosted by the museum that includes an opportunity for a close-up view of the car and time to chat with members of the C8 development team. Bidding started at $100 and eventually reached a winning bid of $15,200 – around 25% of the rumored cost of the new car.

We know that the Bowling Green, KY plant where the Corvette has been built for nearly 40 years will employ a second shift and add over 400 employees to build the new C8. GM recently made the announcement but did not indicate if the move was made to cover anticipated demand for the new model or to increase quality control and slow production.

We do know that as rumors and speculation for the new C8 have heated up over the past year, sales of the current-generation C7 have cooled off significantly. In the first quarter of 2019, sales numbers dropped over 11.5%, to under 4,000 units– some of the lowest in the current generation’s lifespan.