Compact crossover SUVs have steadily become the mainstream vehicle for automakers in the US, and companies have quickly shifted resources to turning out millions of these vehicles every year.

The explosion of the segment, primarily established by the Toyota RAV4 and Honda CR-V in the mid-1990s, caught some automakers by surprise. But the Chevrolet Equinox became a leader in what the vehicle class later evolved into.

Launched for 2005, it was not only Chevy's first car-based SUV but a package full of innovative ideas among similarly-priced rivals. While the Equinox slowly became more conventional, it's still a popular vehicle that's become a staple among top-selling vehicles every year. 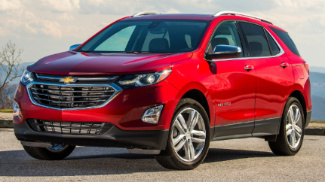 The Chevy Equinox was again redesigned for 2018. In an attempt to boost efficiency, compete more directly, and make room for the 2019 Chevy Blazer midsize two-row SUV, the Equinox was smaller than the outgoing model. That also resulted in it being sized nearly identically to best-sellers such as the Ford Escape, Mazda CX-5, and Toyota RAV4.

Equipment levels were upgraded, so all models included a touchscreen infotainment system, a 7-inch unit on base models, and an 8-inch model on higher trims. In addition, most models received Apple CarPlay and Android Auto connectivity, as well as a wifi hotspot. Leather upholstery and navigation were among the options. Trim levels initially included L, LS, LT, and Premier.

Available driver assistance and safety features included items such as a surround-view camera, forward collision warning with low-speed automatic braking, and a lane-departure warning that had a seat vibration to actively alert drivers if sensors determined the vehicle was drifting from an intended highway lane.

A rear-seat alert system was also designed to help drivers remember children or items left in the rear seat after they exit the vehicle, a device created after a wave of children unintentionally left in hot cars. The equipment will be mandated in all new passenger vehicles by the National Highway Traffic Safety Administration by 2025.

However, there were few changes during the first half of the third-generation Equinox's run. Chevy dropped the diesel option for 2020 due to a lack of popularity and more stringent emissions standards, and the 2.0-liter turbo followed in 2021.

A subtle refresh was announced for 2021, but this was pushed until 2022 due to plant shutdowns and parts shortages during the Covid-19 pandemic. 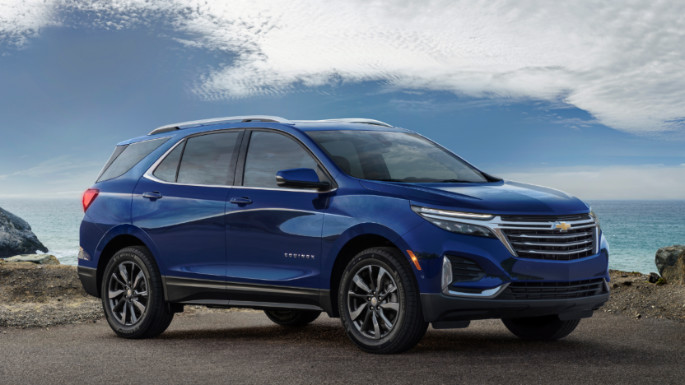 For 2022, Equinox received its most significant round of updates in four years. There were modest changes to the grille and exterior lights, seen above, as well as new wheel options. In addition, the interior received a light refresh.

And the new RS trim level added its own style of front and rear bumpers, a revised grille, distinctive alloy wheels, and red contrast stitching throughout the interior. At the same time, the base L trim was dropped, leaving the LS as the base model. 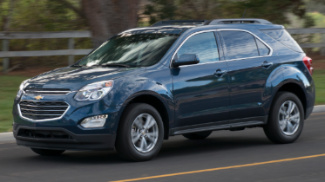 A major redesign was in order for the second-generation Equinox, released for 2010.

Though still larger than its primary rivals, this was the first generation to offer a four-cylinder engine. A new 2.4-liter four-cylinder with 182 horsepower was standard, along with a six-speed automatic and front-wheel-drive. It was also offered with a new 3.0-liter V6 that produced 264 horsepower. Both models also offered all-wheel-drive. While the new Equinox was about the same size as the first iteration, it was substantially lighter, and more efficient engines helped boost fuel economy.

The Equinox's exterior was refined along the lines of the latest Chevy sedans and SUVs, such as the Malibu and Traverse. Inside, there was a vastly redesigned dashboard with higher-quality materials. New features included an integrated navigation system, dual-screen rear entertainment system, rear parking sensors, and a power liftgate.

There were few revisions to Equinox for 2011 and 2012. But for 2013, the 3.0-liter V6 was replaced by a 3.6-liter V6 with 301 horsepower, making it among the most powerful SUVs of its size. In addition, a revised sport suspension setup was now available with the new V6. And driver assistance features such as blind-spot and lane-departure warnings were also made available. Finally, the upgraded infotainment system incorporated a new interface under the Chevrolet MyLink banner. A 4G LTE Wi-Fi hotspot was added for 2015.

For 2016, Equinox received its first significant styling revisions since 2010. There were new bumpers, a redesigned front grille, and other minor exterior changes, while the interior was slightly redesigned. And the MyLink infotainment system was now standard on all models.

However, the refresh wouldn't last long as a third-generation Equinox was on the way for 2018. 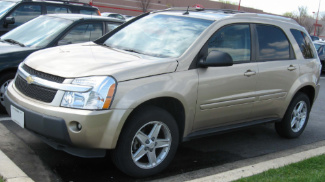 The Chevrolet Equinox was introduced for the 2005 model year to replace the Suzuki-based Tracker SUV. It was also the brand's first car-based SUV, using pieces from then-General Motors vehicle Saturn Vue compact SUV. While it was designed to compete with models like the Ford Escape and Honda CR-V, it was larger than most compact SUVs at the time.

Initially, all first-generation Equinox models received a 3.4-liter V6 engine with 185 horsepower and a five-speed automatic. Front-wheel-drive was standard, with all-wheel-drive as an option. Features like the available OnStar telematics system and a rear bench seat that slid forward and backward to add legroom or cargo space set the Equinox apart. There was also an extensive options list to a standard features roster that already included power windows and door locks, and air conditioning.

Proving popular, Equinox only received minor changes for 2006 and 2007.
A new Sports model was released for 2008. This version included a 264-horsepower, 3.6-liter V6 engine with a six-speed automatic transmission, modifications to the exterior and interior, larger wheels, a power steering system, and a revised suspension system. It was an inch lower than other Equinox models, too.

All 2008 Equinox models received a round of changes. There was a new suspension tuning package to improve ride and handling. Anti-lock brakes and stability control were now standard, and head curtain side airbags were now an option. GM's OnStar telematics system was also given an update, and a plush new LTZ trim level incorporated nearly all optional features, including chrome wheels, heated leather seats, and side airbags. A built-in navigation system and DVD rear entertainment system were also offered on some models.
There were no changes to the Equinox for 2009 ahead of a significantly revised model for 2010.