The Chevrolet Traverse is a large three-row family crossover that slots below Chevy’s full-size Tahoe SUV and the smaller Equinox crossover.

When the Traverse was introduced for the 2009 model year, its timing wasn’t great; gas prices were near historic highs, and the economy was in recession. Not only that, but longstanding members of the SUV community such as the Ford Explorer, Toyota 4Runner, Honda Pilot, and even the Chevrolet Suburban were already available to the consumer.

Chevrolet stepped up to the challenge of offering a competitive crossover during this time by making the Traverse attractive, practical and capable of seating eight, a feat that few other midsize crossovers at the time could say they had conquered.

Today, Chevrolet’s gamble paid off. The Traverse is one of the best-selling three-row crossovers on the market, beating out rivals from Subaru, Nissan, and even its larger SUV sibling, the Tahoe. 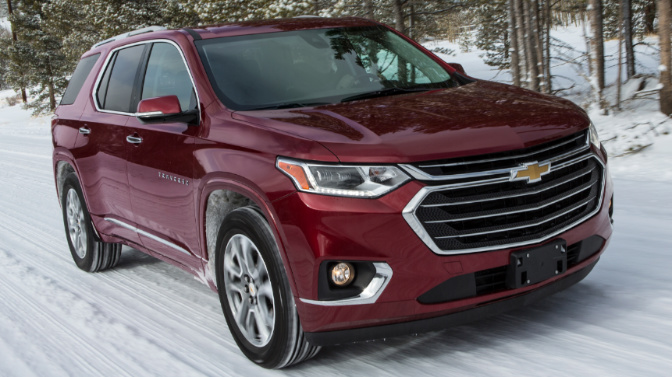 The second-generation Chevy Traverse bears a large resemblance to its popular smaller sibling, the Equinox, and its newer, sportier sibling, the Blazer. Though it is categorized by some as a full-size SUV, it is still technically a midsize crossover. The Traverse spacious interior is due mainly to its upright, boxy shape, relative to other crossovers, though it does have rounded elements that give it dimension and a thoroughly modern appearance.

The Traverse is built on the new C1XX platform, which replaced the Lambda platform on which the previous generation was built. It shares this platform with the smaller Cadillac XT6, Chevrolet Blazer, GMC Acadia, and Buick Enclave.

This generation carries a starting price of just under $31,000 with the destination fee included.

Engine choices have been expanded for the most recent generation of Traverse. The 3.6-liter V6 engine is carried over from the earlier model, but it now makes an improved 310 horsepower and 266 lb-ft of torque.

All trims and engine choices are mated to a nine-speed-automatic transmission.

Six trim levels are available to Traverse buyers for the second generation, including the base L, LT, LS, RS, Premier, and High Country (which is the highest trim level).

Sporty RS models separate themselves from the other trims as the sport-oriented trim and are the only ones to feature the four-cylinder engine and only front-wheel-drive.

Recent updates to the Traverse have been minimal. In 2020, the four-cylinder engine option was dropped to make the 3.6-liter V6 standard across all trims.

Additionally, the infotainment system was upgraded to GM’s Infotainment 3 system, and several new color options were added to the optional list.

For the 2022 model year, Chevy tweaked the exterior styling on the Traverse to give it a sleeker appearance, added wireless Apple CarPlay and Android Auto connectivity, and an improved suite of driver-assist tech that’s standard on all models (highlights include automatic emergency braking with pedestrian detection, lane-departure warning, and lane-keep assist; adaptive cruise control is now optional on additional trims. 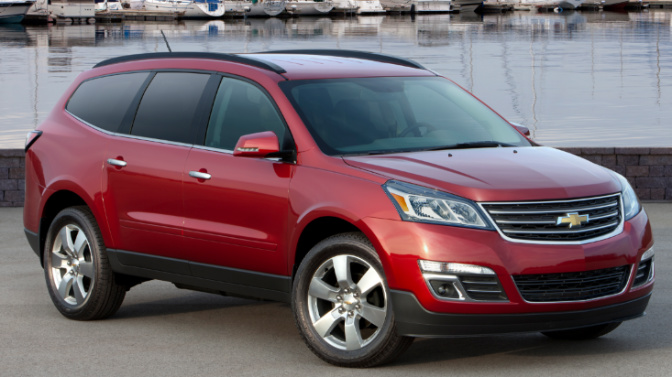 The Traverse was designed as a replacement for both the TrailBlazer and Uplander minivan. It made its debut in arguably one of the worst times in automotive history – 2008 – and went on sale as a 2009 model.

Reviewers praised it for its sleek design, quiet ride, and outstanding safety ratings, earning five stars on all crash tests with the exception of a four-star rating for its rollover test.

Although it was never designed to have traditional SUV off-roading abilities, it was still very versatile with both a front-wheel-drive and all-wheel-drive option available and designed to have a more car-like ride than many other SUVs of the time. In many ways, it helped set the tone for the crossover SUV market that is booming today, and it did a good job bridging the gap between the SUV and minivan models it replaced.

Only one engine and one transmission were offered in the Traverse: A 3.6-liter V6 engine and a six-speed automatic transmission. Initially, the lower-end LS and LT Traverse models had lower power outputs with 281 horsepower and 266 lb-ft of torque.

The top-of-the-line LTZ trim got a slight power boost with 288 horsepower and 270 lb-ft of torque.

2013 Traverse models saw a mid-cycle refresh, most of which were cosmetic. A revised grille and taillights were introduced, along with reprogrammed transmission upgrades to provide quicker and smoother shifting, though nothing was updated with the 3.6-liter engine and its performance output. Additionally, a color touchscreen display was now offered along with a Bose audio system on top-trim models.