You might think the 2021 Chrysler 300 is getting long in the tooth. And you’d be right. This car is so old that it's been through three different car companies (if you count the first generation). But like an aging starting catcher who has watched three different managers come and go, the Chrysler 300 still delivers on a daily basis.

It provides North American consumers with a proper front-engine, rear-wheel drive (RWD) luxury sedan at a reasonable price. No other American manufacturer offers that, and you’d be hard-pressed to find anything that competes with it from Europe, Japan or Korea.

Starting at just $31,000 MSRP, and offering options for all-wheel drive (AWD) or a 5.7-liter Hemi V8 engine, it’s no wonder that an average of 43,000 new car buyers a year have found the 300 so appealing since the second generation arrived for the 2011 model year. 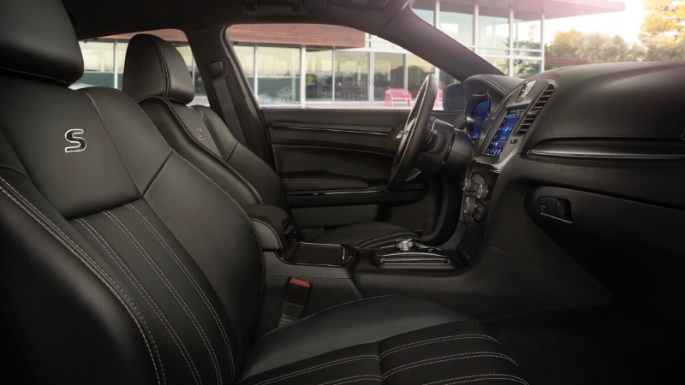 Not much has changed in the Chrysler 300’s basic appearance since the second-generation car’s major facelift for the 2014 model year. The old school “three-box design” gives the 300 a basic profile that a seven-year-old could sketch out with crayons. Look up “car” in the dictionary, and a photo of a 300 should be right next to it.

There’s nothing wrong with that. It’s reminiscent of another era without the kind of J. Mays Retrofuturist influence that turned out cars like the Audi TT, Volkswagen Beetle and Ford Thunderbird. From the base 300 trim all the way up to the high-end 300S, you could roll up to any valet and be proud of the way a 300 looks.

The grille and headlights have changed over the years. The 2021 version has bi-xenon halogen projector lamps with LED driving lamps on the lower trims. Stepping up to the Comfort Group on the Touring L and 300S trim levels nets adaptive HID lamps. The grilles are either black or chrome depending on your package and trim selection, and all offer the same tough, no-nonsense appearance.

The Chrysler 300 still offers interior quality that rivals cars with price tags twice as high. You’ll find cloth upholstery covering the eight-way power driver’s seat in the 300 Touring, but Nappa leather upholstery is standard on both the 300 Touring L and 300S. The 300S gets perforated inserts and accent stitching as standard, which is also available on other trims with the Comfort Group. Heated front seats are standard on the top two trim levels and heated rear seats are available on both of those trims as well. 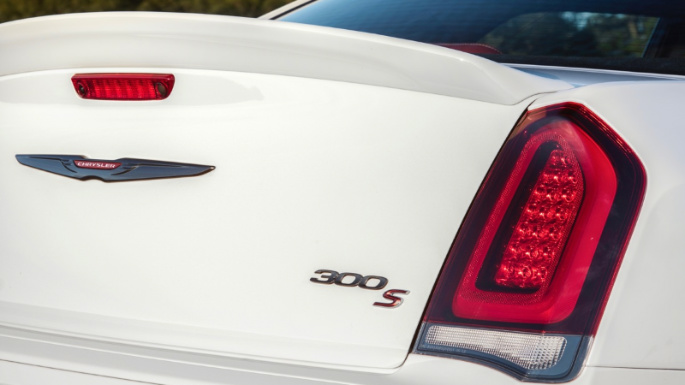 Both engines come with an eight-speed automatic transmission (with paddle shifters on the 300S). As mentioned above, RWD is standard. AWD is a $2,750 option, but isn't available on the 300S.

In the lowest trim, with RWD and the V6, the 300 feels like what Hertz or Enterprise would consider an “upgrade.” Which is exactly what it is. But even with cloth seats and no optional equipment, the 300 is quiet, capable and comfortable on the road. It never tries to convince you that it’s a European car, which Cadillac and Lincoln have historically tried to do and failed miserably.

Step up the trim ladder to a well-equipped AWD Touring L and the driving experience is very traditional luxury. The V8 power in the S isn’t what you’d expect out of the higher-displacement powertrains offered in its twin, the Dodge Charger, but feeling that Hemi launch the rear wheels is still a fun experience. 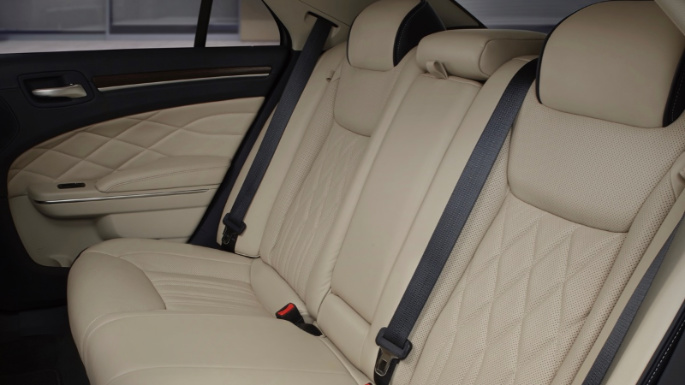 The 300 offers what you’d expect out of a luxury sedan: Generous front and rear legroom. With 41.8 inches in the front seats and 40.1 inches in the back seats, the 300 beats entry-luxury mainstays like the Lexus ES350 and competes with cars like the Toyota Avalon and Volvo S90. In fact, you don’t get significantly more rear legroom in any sedan until you step up to wildly expensive cars like the Audi A8 and BMW 7 Series.

Overall, you get 106.3 cubic feet of passenger volume, which still puts the 300 in the EPA’s “midsize” class, but handily beats the 104.3 cubic feet of the Genesis G70 and appears positively cavernous compared to the Lexus ES350’s paltry 99.9 cubic feet.

Trunk volume is also strong for the class. It’s not SUV-sized, but the 16.3 cubic feet of cargo space is good enough to swallow about four large suitcases. 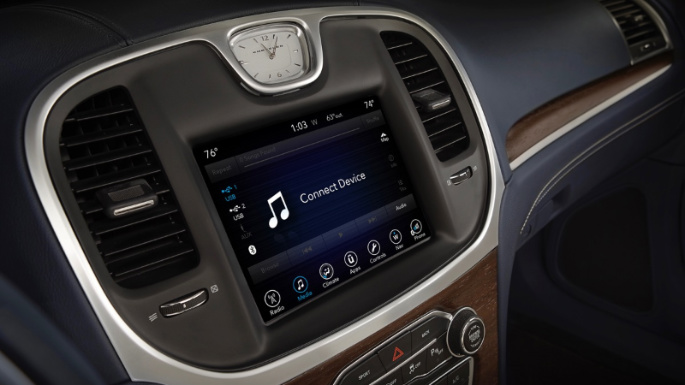 Not much has changed on the instrument panel and center stack, and for that we’re grateful. The clocks are simple to read and informative, and the Uconnect 4C infotainment system with the 8.4-inch touchscreen is still—for our money—the most intuitive in the business. It offers tons of functionality, the ability to scroll through with prominent knobs, and excellent steering wheel mounted controls that haven’t changed since they were introduced on the second-generation Jeep Grand Cherokee when Bill Clinton was still in office. Apple CarPlay and Android Auto are standard as well.

The 8.4-inch touchscreen is standard across the 300 lineup, which is a blessing compared to a the early days when lower trims would get a display the size of a first generation Gameboy. If you want more tech, the $3,495 Popular Equipment Group adds a 506-watt amp, nine premium Alpine speakers, GPS navigation, SiriusXM Traffic Plus (with a five year subscription), surround sound, a trunk mounted subwoofer, and a dual pane sunroof. It’s not cheap, but it adds a ton of desirable equipment. 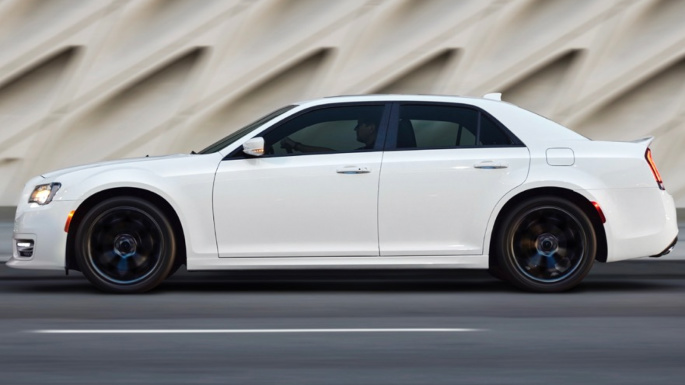 The 2014 facelift brought a ton of advanced safety features to the Chrysler 300, and the list of equipment continues to grow, but only when you step up in trim level and packages. That's a disadvantage when you compare the 300 to more common vehicles like the Honda Accord and Subaru Legacy, where advanced safety equipment is either standard or relatively inexpensive.

For example, blind-spot monitoring and rear cross-traffic alert are only available on the Touring L or 300S trims (starting at $34,540 for the 300 Touring L with RWD). The $2,395 SafetyTec Plus Group, adds forward collision warning, automatic emergency braking, adaptive cruise control, automatic high beams, lane departure warning, and rain-sensing wipers. And you’re still another $2,295 away from getting automatic dimming bi-xenon HID headlamps, which are tucked into the Comfort Group. 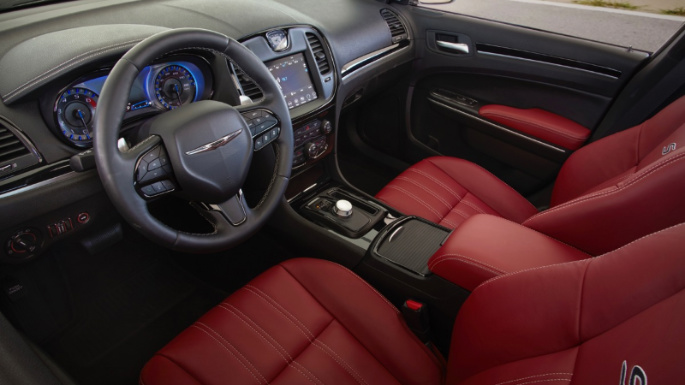 You won't win any awards for fuel economy with the 300, but gas mileage is not terrible, either. Your best option is the 3.6-liter V6 with RWD, which offers 19 mpg city, a strong 30 mpg highway, and a combined rating of 23 mpg.

To put that in perspective, the much smaller (and significantly more expensive) Acura TLX with a four-cylinder engine only edges out the V6 RWD 300 by just 1 mpg in both highway and combined fuel economy.

The 300's warranty falls about mid-pack, with a three-year, 36,000 mile basic warranty, and five-year, 60,000 mile powertrain protection. That's nowhere near what Genesis offers, but it's competitive with the Japanese and European manufacturers.