Part of Chrysler’s inaugural Pacifica minivan model line (begun in 2017), the 2019 Chrysler Pacifica sees small changes to packaging and interior options, plus exterior style changes. Competing with other minivans such as the Honda Odyssey, Toyota Sienna, and Dodge Grand Caravan, the 2019 Chrysler Pacifica distinguishes itself with its wide range of interior technology and user-friendly Stow ‘n Go seating. The 2019 Pacifica is an excellent choice for large families, rideshare professionals, and businesses in search of a feature-loaded new car among the finest in the minivan class in terms of features and pricing.

For a feature-loaded minivan with affordable pricing, solid safety ratings, and a host of hybrid model options, the 2019 Chrysler Pacifica is an excellent new car choice.

Unlike other minivans such as the Kia Sedona and Dodge Grand Caravan, the 2019 Chrysler Pacifica has a distinctly curved and soft exterior. Some of the most prominent features include a large greenhouse (great for visibility) and a smaller grille. Plug-in hybrid models are virtually indistinguishable from non-hybrid models: the only tell is small “Pacifica Hybrid” badging on a few exterior locations and the AC plug hidden behind a small door on the vehicle’s left front side. 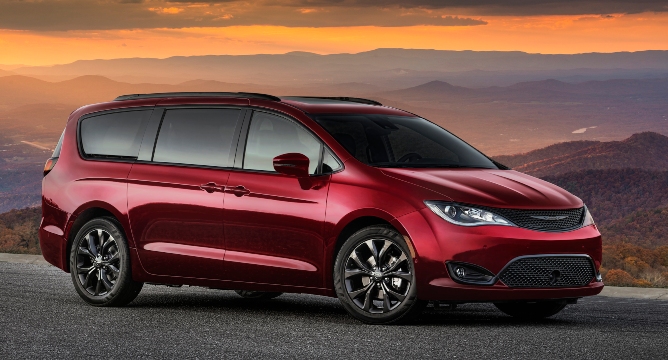 One notable option for both hybrid and non-hybrid 2019 Pacifica models is the S Appearance Package, which features 18-inch Black Noise wheels, Gloss Black accents throughout the exterior, (and an all-black interior with Light Diesel Gray accents).

The 2019 Chrysler Pacifica is available in a number of exterior color options, including Bright White, Billet Silver, Granite Crystal, Brilliant Black, Velvet Red, Jazz Blue, and many more. It measures 17 feet in length, just over 6.5 feet in width, and just under 6 feet in height. 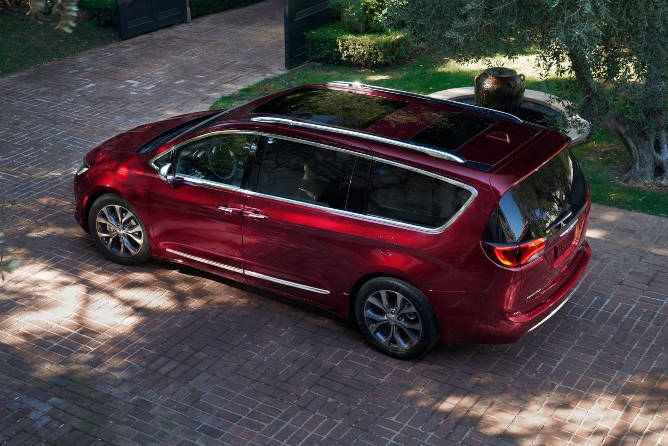 Designed to accommodate large groups of people, the 2019 Chrysler Pacifica features a number of amenities and innovations engineered to optimize comfort for passengers and driver alike. 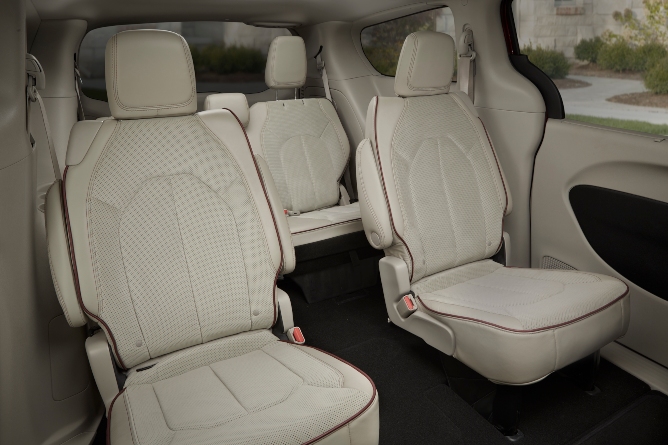 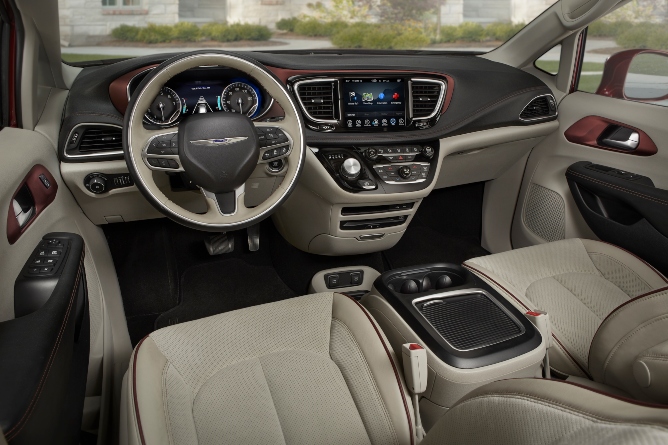 The dashboard layout in 2019 Pacifica models is both intuitive and feature-loaded. Most drivers describe it as futuristic, with buttons and touchscreen interfaces controlling essential driving features as well as interior amenities like audio controls and climate control. (A central round dial enables drivers to switch gears, and the parking brake is engaged and disengaged with a button.)

Most reviewers find the standard Uconnect infotainment system to be easy to use, though some felt inconvenienced when searching through several sub-menus to find features such as optional steering wheel heat (available on Touring Plus, Touring L, Touring L Plus, Limited, Hybrid Touring L, and Hybrid Limited models) and seated ventilation (available on Limited and Hybrid Limited models) in the entertainment system. Upfront, Pacifica models feature either 7-inch or 8.4-inch center touchscreens.

The 2019 Chrysler Pacifica features a multitude of cup holders, map pockets, sliding drawers, and storage bins to fit objects large and small. A tri-pane panoramic sunroof is standard on Limited models and optional on Touring L Plus models.

Great for surplus stuff and passengers, the 2019 Chrysler Pacifica has ample cargo space no many how many people are riding in it. Non-hybrid Pacifica models feature 32.3 cubic feet of storage with all seats occupied, 87.5 cubic feet with the third row down, and 140.5 cubic feet with both rows folded. (The same goes for hybrid models, though drivers have to manually remove second-row seats from the cabin, as no stow n’ go options are available).

As mentioned above, several cup holders, map pockets, sliding drawers, and storage bins populate the 2019 Pacifica, making the storage of personal items easy for drivers and those seated in rear seats.

For easy loading and unloading, a hands-free liftgate is standard on both the Limited and Hybrid Limited models. Hands-free power sliding doors and liftgate are also standard on these models and optional on the Touring L Plus.

Though the 2019 Pacifica has an abundance of tether anchors, many drivers report that they are difficult to find, and some could be confused for different hardware. Further, some reviews report that many of the lower anchors are difficult to access while others require significant force for car-seat strap attachment. 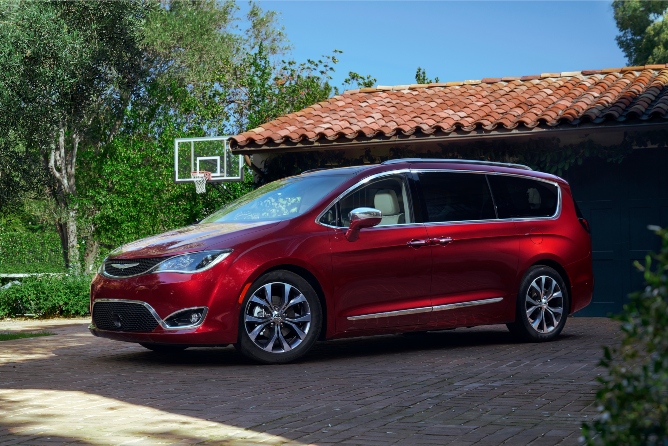 All non-hybrid 2019 Chrysler Pacifica models have a 3,600-pound towing capacity. Towing is not recommended for the hybrid version.

Futuristic in its design, the 2019 Pacifica is populated by buttons and touchscreen interfaces. (As mentioned above, buttons and knobs even control essential driving features such as gear-shifting and emergency-brake engagement.)

A seven-inch full-color digital driver display in the instrument panel is standard on Touring L Plus and Limited, models and optional on all other non-hybrid models. 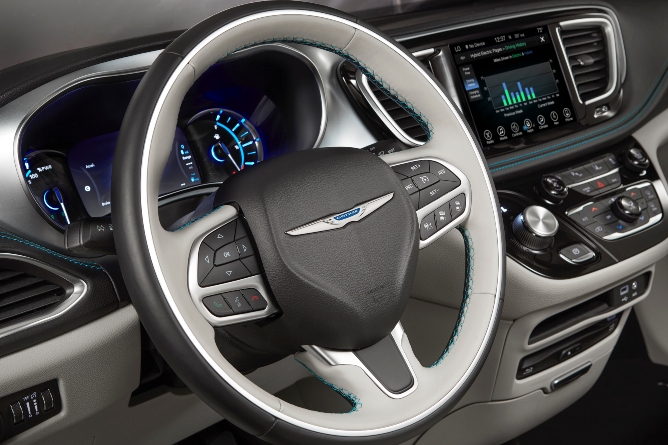 A six-speaker audio configuration is standard on L, LX, Touring Plus, and Touring L models. 13 Alpine speakers are standard on Touring L Plus and Limited models.

Integrated voice command with Bluetooth is standard on all 2019 Pacifica models. Touring L Plus and Limited feature SiriusXM Traffic Plus and a 5-year subscription to SiriusXM Travel Link (optional on other models except for the L and LX). A 1-year subscription to SiriusXM Guardian Service is standard on Hybrid Limited models and optional on other hybrid models.

Among the safest minivans on the market, the 2019 Chrysler Pacifica was awarded a 2019 Safety Pick by Insurance Institute of Highway Safety (IIHS).

Performing well is every crash test, the 2019 Pacifica received “Good” scores across the board, except for two “Acceptable” scores in passenger-side crashworthiness and headlight performance, and a “Marginal” score in Child Seat Anchors (LATCH) ease of use. The 2019 Pacifica also received a rarely-awarded “Superior” score in front crash prevention.

Additionally, the 2019 Chrysler Pacifica was awarded a perfect 5-star overall score in its safety rating from the National Highway Traffic Safety Administration (NHTSA). It received five stars in all individual categories, except rollover safety, where it received four stars.

Some of the many active safety features and automatic driver-assistance systems (ADAS) features on the 2019 Chrysler Pacifica include advanced multistage front airbags, driver-inflatable knee bolster airbags, electronic stability control, and blind-spot and cross-path detection — all of which are standard on all models, except for electronic stability control, which is not available on hybrid models.

The 2019 Chrysler Pacifica delivers a driving experience that — while not exactly exciting — is quiet, reliable, and safe. The reworked nine-speed automatic transmission is reviewed as smoother than Chrysler’s past efforts.

Even smoother is the Pacifica Hybrid electrically variable, continuously variable transmission (CVT). Matched to the nine-speed automatic transmission is the Chrysler Pacifica’s 3.6-liter V6 24-volt VVT Engine (ESS is standard on all models except the L and the LX).

Those in search of a quieter and more efficient alternative will find it under the hood of the 2019 Chrysler Pacifica Hybrid. The 3.6-liter V6 eHybrid engine powering the Pacifica hybrid models is supplemented by battery-fed electric motors. This system registers 260 horsepower total. The industry’s only plug-in minivan, the Pacifica Hybrid can be recharged in two to four hours with the included 120-volt charging cable or with a 240-volt charger.

The non-hybrid 2019 Chrysler Pacifica minivan models rank among the most fuel-efficient minivans, though not by sizeable margins. The L model gets an EPA-estimated 18 miles per gallon in the city and 28 miles per gallon on the highway.

All other non-hybrid models get 19 miles per gallon in the city and 28 miles per gallon on the highway. These numbers are identical with those of the Honda Odyssey and slightly better than the Dodge Grand Caravan.

It’s in the Pacifica Hybrid line that the 2019 Chrysler Pacifica stands out in terms of fuel economy. The industry’s only plug-in hybrid minivan, the Pacifica Hybrid features an excellent EPA-estimated 82 MPGe when running on electric power. It has an electric-only range of 33 miles, and it gets 32 miles per gallon combined once the gas engine starts.

The 2019 Chrysler Pacifica is competitively priced among other minivans on the market.

The base model L starts competitively with a destination-included price of $28,390.

For a set of features that distinguish the 2019 Pacifica from other models at the same price point, we recommend stepping up to the LX trim, which starts at $31,190.

In the hybrid line, the 2019 Pacifica Hybrid Touring Plus trim starts at $41,390 and extends all the way to $46,390 with options added. The extra expenses on the 2019 Chrysler Pacifica Hybrid are justifiable for many drivers due to its fuel economy and its eligibility for a $7,500 federal rebate as a plug-in car.

At its base-model price, the Pacifica sits below the Honda Odyssey and Toyota Sienna and is just above the feature-thin Kia Sedona.

The aging Dodge Grand Caravan, however, is the lowest-priced of all the minivans at base price. A great contender in terms of affordability and quality, innovative design and comfort-centric features — plus a set of best-in-class hybrid models — the 2019 Chrysler Pacifica is an excellent choice for any minivan driver.