Vehicle Type: The Pacifica is a four-door, three-row minivan.

Powertrain: A 287-horsepower, 3.6-liter V6 with front-wheel-drive and a nine-speed automatic transmission. 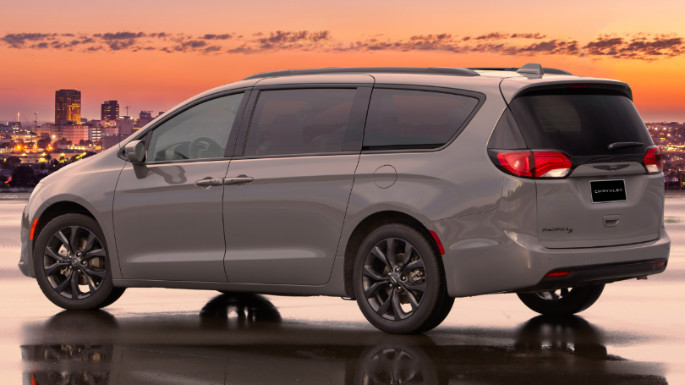 The Chrysler Pacifica is Fiat Chrysler Automobiles’ latest minivan, continuing a lineage started in 1983 by the Dodge Caravan and Plymouth Voyager. Over the years, the parent company has taken on nearly as many names as the minivans themselves, but their design continues to maximize space for both passengers and cargo.

The Pacifica goes up against the Dodge Grand Caravan, Honda Odyssey, Kia Sedona, and Toyota Sienna as its primary minivan rivals. But some minivan buyers also consider three-row SUVs such as the Honda Pilot, Kia Telluride, Toyota Highlander, and Dodge Durango.

All-wheel-drive became available partway through the 2020 Pacifica’s run with an AWD Launch Edition model. Based on the Touring L trim, it also includes the S Appearance Package, self-sealing tires, and other AWD-specific equipment.

All-wheel-drive will be available on other gasoline-only Pacifica models for 2021.

Also for 2020 is a new Red S Appearance Package, which combines the blacked-out trim of the S Package with red leather upholstery inside, 20-inch wheels on gasoline models, 20-speaker Harman/Kardon audio system, and the Advanced Safety Technology Package.

Hybrid models also get the same grille design as gasoline models now, and the panoramic moonroof can be combined with eight-passenger seating for the first time. There are a handful of other detail changes, too.

While the minivan segment no longer reigns as the primary family hauler for American families, it has a loyal following for those who would rather maximize space over anything else. Now with available all-wheel-drive, it give consumers who want a three-row vehicle another serious alternative to the SUV. 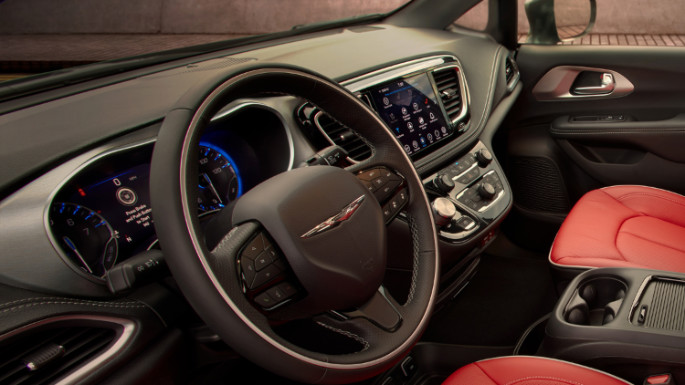 The Chrysler performed well in all crash tests. However, it scored the second-highest ‘Acceptable’ rating in IIHS’ small-overlap passenger-side crash test, when other minivans were rated the top ‘Good’ score.

Unfortunately, automatic emergency braking is only available as part of a package that also includes adaptive cruise control with stop-and-go function, automatic high beam assist, a surround-view camera, and a number of other features.

Nearly all other rivals include at least low-speed automatic emergency braking as standard, while the Sienna includes adaptive cruise control, lane keep assist, pedestrian detection, and other technologies on all models. 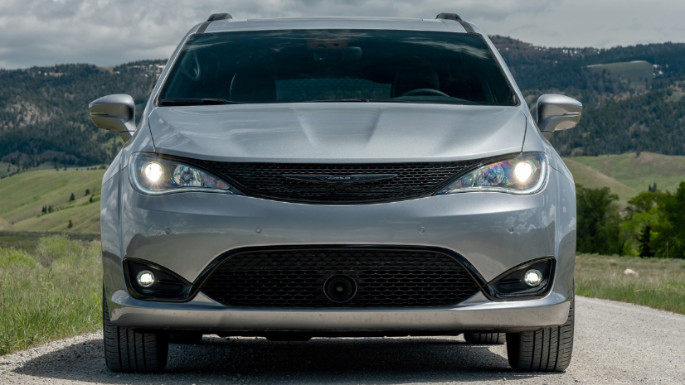 The Pacifica Touring starts from $35,540, which is about $2,000 to $3,000 more than its rivals. But it’s also better equipped than the base versions of minivans from Honda, Kia, and Toyota. All models get power sliding doors, a power liftgate, heated exterior mirrors, Apple CarPlay and Android Auto compatibility, and other features that usually require stepping up a level or two on competitors. The similar Chrysler Voyager offers fewer features to compete with entry-level versions of rival vans. 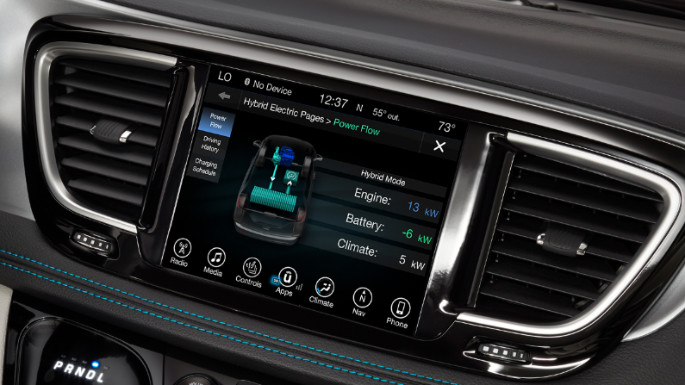 The Pacifica comes standard with a seven-inch touchscreen infotainment system using Chrysler’s UConnect system. Most functions are controlled through the screen, but there are numerous physical buttons and knobs for common items such as audio volume, temperature, and other items. It’s among the clearest and easiest to use systems on the market. A larger 8.4-inch touchscreen is available on lower trims, standard on others, and is also available with built-in navigation.

The UConnect Theatre Package is available across the board (standard on the Touring L Plus trim) and features two 10-inch screens mounted on the front seatbacks. It also comes with a Blu-Ray player, HDMI connectors, a household-style power outlet, and USB charging points. While this makes it easy for second-row passengers to see the screens, third-row passengers are left out compared to competing systems that have a drop-down screen from the roof, as in the Honda and Toyota minivans. Kia does not offer a factory rear entertainment system. 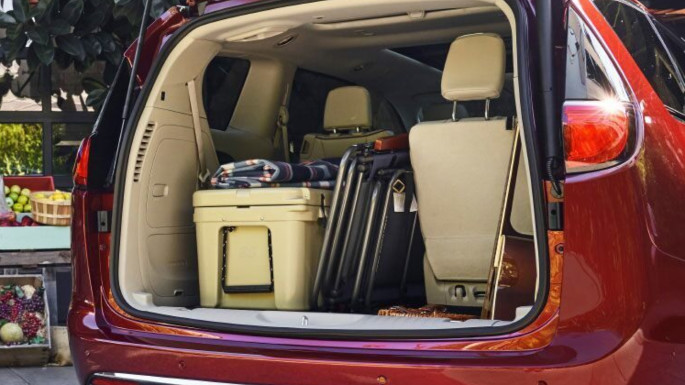 The gasoline Pacificas get Chrysler’s Stow ‘N Go folding seat system, where the third-row splits 60/40 and folds into a well in the floor. The second-row captain’s chairs collapse and fold into individual covered bins in the floor.

That’s where the Chrysler one-ups the competition (apart from the Dodge Grand Caravan and Chrysler Voyager), eliminating the need to wrestle out the second-row captain’s chairs to maximize cargo space. And when the seats are up, the covered bins act as more hidden storage away from prying eyes. This feature is also retained for all-wheel-drive models, but not the hybrid, which uses larger captain’s chairs that have to be lifted out.

Pacifica models come with seating for seven as standard, but an eighth seat is available for the middle row on all models. This seat doesn’t fit as neatly as the other rear seats, however, and has to be completely removed, even though it’s relatively light. Second-row seats slide forward to allow access to the third-row.

But the Pacifica doesn’t have as large an interior as most of its rivals, larger than the Grand Caravan, about the same size as the Sedona, but behind the Odyssey and Sienna. All of the minivans are roughly the same size, though, so it may not matter in everyday use. 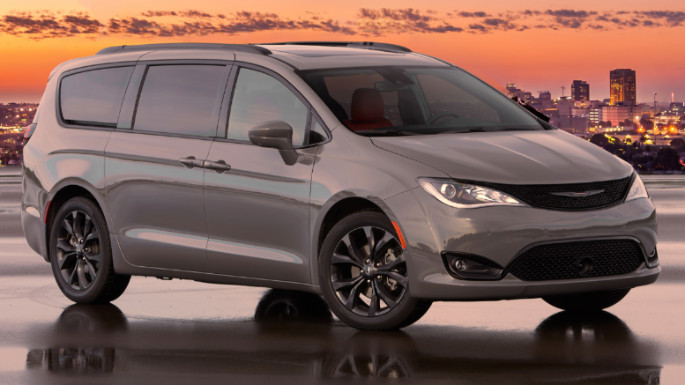 Chrysler has tried to break from the traditional minivan shape without compromising packaging too much, so it’s adorned all Pacifica models with plenty of trim and detailing that’s uncommon of the segment. It may not be to everyone’s taste, but Chrysler also offers an appearance package to give this minivan a more aggressive appearance.

It’s a similar story inside, where there are both pale and dark colors available. All but the base model gets leather upholstery as standard, which is unusual in this segment, and most also offer a moonroof that has either two or three panes to cover the entire interior with light, should the occupants choose – another unusual feature among minivans.

The controls take some getting used to, between the rotary-style gear selector and the litany of buttons on the center console that serve as redundant controls for the UConnect infotainment system. But once familiarized, they fall more readily to hand than using the touchscreen in some situations.

Chrysler’s use of redundant controls is unlike that of Honda and Toyota, which put most functions in a touchscreen. Kia’s controls are somewhat better marked and easier to use, but they are sometimes more of a reach. 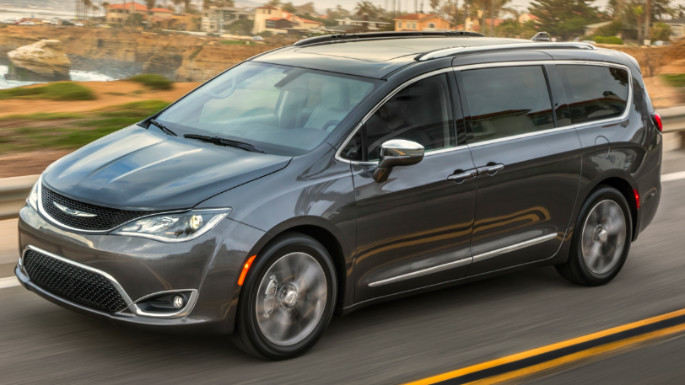 The gasoline-only Pacifica uses a 287-horsepower V6 that’s relatively good at powering the heavy vehicle. Mated to a nine-speed automatic, the Pacifica is smooth to drive, if not as effortless as the Honda Odyssey or Toyota Sienna, which have slightly more refined powertrains.

The Pacifica Hybrid has a 260-horsepower gas-electric combination, which is down on power compared to all other minivans, but the instant electric torque from the motor mitigates that for the most part. It’s also smoother because it uses an eCVT transmission, whereas the nine-speed automatic can be jerky under some circumstances.

The ride is plush and interior quiet on the highway, so the Pacifica majors in comfort as most minivans do. A Honda Odyssey feels slightly more athletic and less cumbersome in tight situations, however.

All-wheel-drive is available, making it the second minivan to offer it after the Sienna. Chrysler says it’s capable of transferring up to 100 percent of power to the wheels losing traction, or it can disconnect power to the rear wheels when the system isn’t in use, in order to save fuel. For 2020, the system is offered only on one trim level, but that will be expanded in 2021. 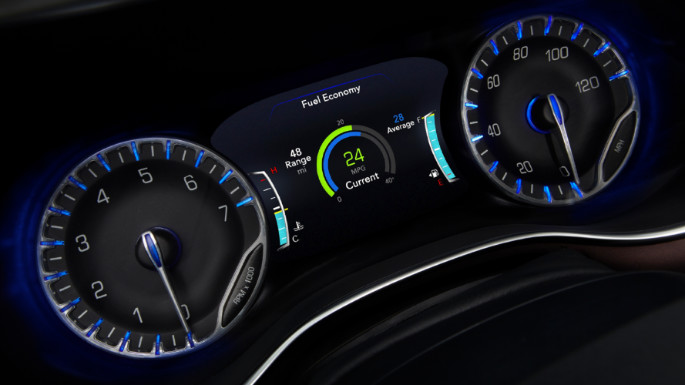 The Pacifica gasoline models are rated at 19 mpg city, 28 mpg highway, with 22 combined. The Pacifica Hybrid is rated at 30 mpg combined and 82 MPGe, with 32 miles of electric-only range. All-wheel-drive models have not yet been rated.

The Pacifica compares favorably to other minivans, scoring similarly to the Honda Odyssey and slightly more than all versions of the Kia Sedona, Toyota Sienna, and Dodge Grand Caravan.

The Pacifica Hybrid’s score matches that of some small SUVs, while its electric-only range is more than any plug-in hybrid three-row SUV from BMW or Volvo, for example.

While most three-row gasoline SUVs score comparably to the Pacifica in fuel economy, they usually have all-wheel-drive. And the Toyota Highlander Hybrid, the closest rival to the Pacifica Hybrid, scores 35 mpg combined even with all-wheel-drive. It’s not as powerful as the Chrysler, but also offers seven seats and better efficiency for those who may not be able to plug into a charger on a regular basis. 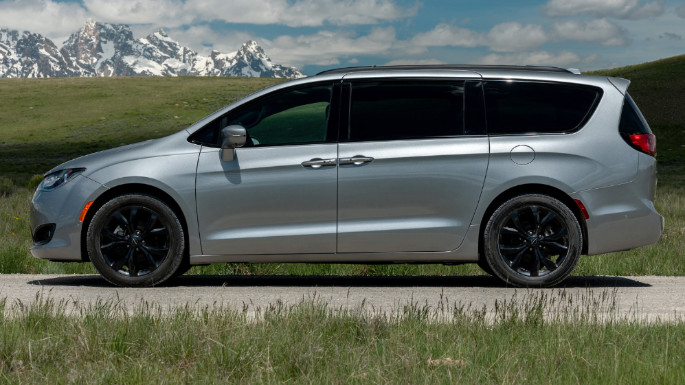 The Chrysler Pacifica starts from $35,540 MSRP, including the $1,495 destination charge. The Pacifica lineup consists of five trim levels, three of which are available on the Pacifica Hybrid.

The Pacifica Hybrid Touring starts from $41,490 MSRP and has the same equipment, apart from some hybrid-specific trim and the 260-horsepower gas-electric hybrid powertrain with an electric continuously variable transmission.

Other options for the Touring include a removable eighth seat for the second row, an 8.4-inch touchscreen with or without built-in navigation, inflatable spare tire, and towing package.

Options include the Advanced SafetyTec Group, towing package, S Appearance Package, eight-passenger seating, moonroof, and a 20-speaker Harman/Kardon audio system. Also available is hands-free opening for the power tailgate, as well as the power sliding doors. The 35th Anniversary Package includes the moonroof on the Touring L Plus trim. 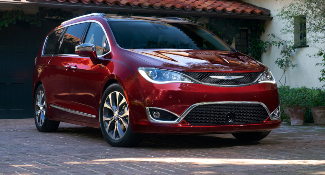 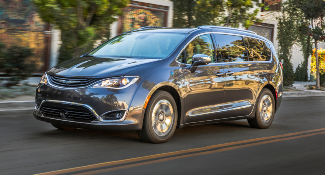 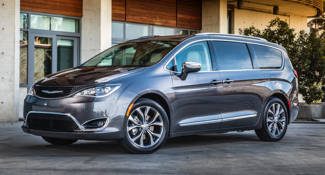