The Dodge Charger is a full-size sedan that competes with the Genesis G80, Buick Lacrosse, and Toyota Avalon. Dodge first sold the Charger for the 1966 model year and positioned it as a real American muscle car that competed with the Ford Mustang and Chevrolet Camaro.

The Charger changed shapes and styles over the years until 1987, when it was discontinued. Dodge brought the beloved car back for the 2006 model year as a sedan, a style very different from the Charger’s muscle car origins. Even so, newer versions of the Dodge Charger are available in luxurious and very high-performance trim levels that blur the line between four-door family cars and full-on muscle cars.

The Charger is aimed at families that need the space of a vehicle like an SUV but want sporty handling and sedan styling. Buyers seeking performance will also find that the Dodge Charger is available with up to 707 horsepower in the SRT Hellcat trim.

The Charger is positioned as a high-performance alternative to the common sedans offered by other companies and has more aggressive styling as a result. Many would even consider the Charger as a competitor in the sports car space, as its raw power and acceleration puts it in the running with American muscle cars like the Ford Mustang and Chevrolet Camaro. Many of the Charger's powertrain options are also under the hood of Dodge's true muscle car, the Challenger. o many in fact, that the Charger can be accurately called a four-door muscle car.

Sharing much of its engineering with the Chrysler 300, the Dodge Charger has been on sale for nearly ten years in its current form. While it has evolved over the years, the Charger has not been majorly overhauled for the new model year. Updates for 2019 include a new GT performance trim, a new all-wheel drive SXT model, and performance upgrades for the SRT Hellcat and Scat Pack trims. Other Charger features carry over, including the engine lineup and most trim levels.

All-wheel drive is a new option for the 2019 model year, but is only available for the base SXT trim. Rear-wheel drive is standard for all other models. 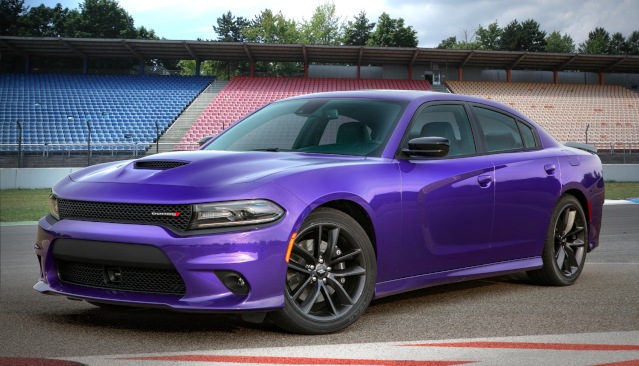 The Dodge Charger rides on either a 120.2-inch or 120.4-inch wheelbase which makes it notably larger than competitors like the Toyota Avalon at 113 inches and the Genesis G80 at 118.5 inches.

Inside, the Dodge Charger has been updated for 2019 to include new leather options for lower trim levels and a Cold Weather package that includes heated cloth seats and a heated steering wheel.

The Charger's front seats have been praised as being firm but supportive, with extra points for comfort on longer trips. The driver's seat is six-way power adjustable, and when combined with telescoping steering adjustments, there is a comfortable position for nearly any driver in the Charger.

Rear legroom is generous, and the rear seat is wide enough to accommodate two adults and a child or two full-size car seats. The sloping roofline does cut into rear head room and may make it harder for tall passengers to enter and exit the rear seat. 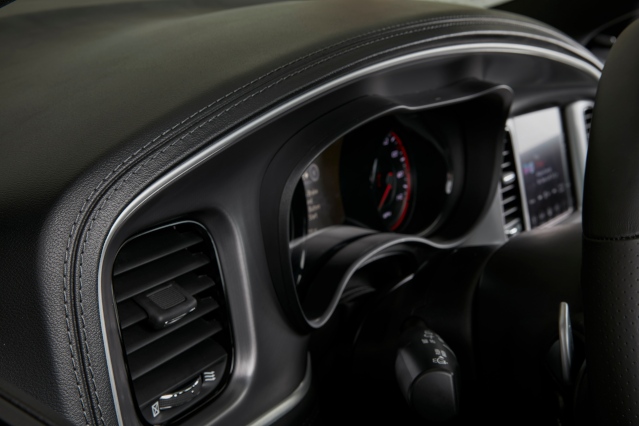 The Charger’s dash layout is clean and intuitive, with most controls oriented toward the driver. Some functions like climate settings are repeated between physical buttons and the infotainment system touchscreen, which may be confusing for some.

There is no denying the Dodge Charger's performance abilities, and because it's a full-size sedan, there is plenty of interior space as well. The Charger’s 16.5 cubic feet of trunk space bests other vehicles in the segment, but the area is narrow inside and the lift-over height makes loading and unloading heavy items more difficult. 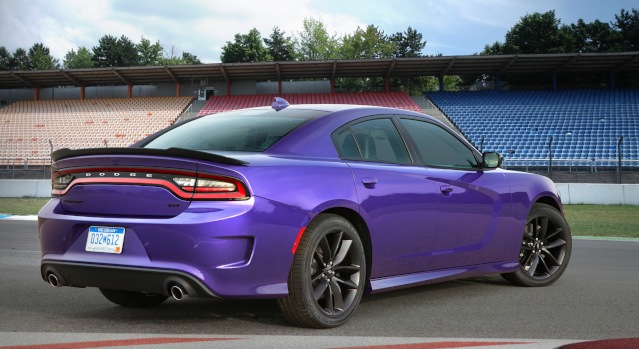 While there is plenty of overall interior space, several reviewers knock the Charger for lacking door-pocket and small-item storage. Many people will also find that the Charger's cupholders are too small, struggling to fit more than a soda can.

Dodge vehicles use the same UConnect infotainment system that is found in other vehicles from FCA, and it is widely regarded as one of the best and easiest to use systems in the industry. The SXT trim comes with a 7-inch touchscreen, while all others come with an 8.4-inch screen. Both screen sizes have colorful displays that are easily viewable from any angle and the UConnect software is very easy to learn and navigate. 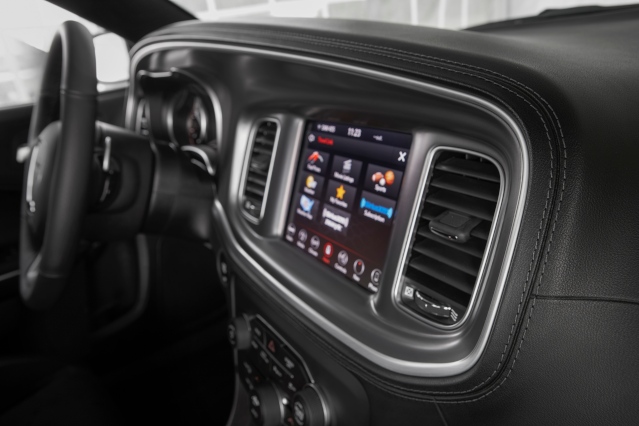 The Charger earned “Good” ratings in most IIHS crash test areas, with notable exceptions in driver-side crash safety and child seat ease of use, which were both rated as "Marginal". Headlights were also noted as a weakness, earning a “Poor” rating in IIHS safety testing. When equipped with optional safety equipment, the Dodge Charger has a “Superior” rating for front crash prevention.

These ratings place the Charger behind some of its competitors, many of which have earned a Top Safety Pick + rating from the IIHS. The NHTSA gave the Charger four stars in front crash testing and five stars for side impact and rollover protection.

The Charger is available with four engines, ranging from the 300-horsepower 3.6-liter Pentastar V6 to the 707-horsepower supercharged 6.2-liter Hemi SRT Hellcat V8. All models come with an 8-speed automatic transmission. The Scat Pack and SRT Hellcat models also include line-lock functions.

The Dodge Charger is unique in its class, offering the only sedan with both a V8 engine and rear-wheel drive. Acceleration is brisk, even with the base engine in place, but V6 Chargers fall short of quicker front-drive competitors like the Nissan Maxima.

The Scat Pack model comes with a 6.4-liter Hemi V8 engine, also called the "392" for its displacement. This engine has 485 horsepower and 475 lb-ft of torque. The Charger Daytona also comes with this engine.

The Dodge Charger SRT Hellcat gets a 6.2-liter Supercharged Hemi V8 engine that has 707 horsepower and 650 lb-ft of torque.

Performance is where the Charger excels against all others in its class. Scat Pack and SRT Hellcat models are breathtaking in their acceleration abilities, and the SRT Hellcat comes with race inspired performance tricks to keep it running under the harshest of conditions. New this year, the Hellcat's exterior body work has been enhanced to bring greater cooling and aerodynamics at high speeds. Line lock holds the front brakes so that the car can execute a burnout, and there is a feature called after run chiller that uses the air conditioner's compressor to push air through the engine bay and help protect against damage after hard use.

This is all good enough to help the SRT Hellcat run a quarter mile in 11.8 seconds and achieve a 204 MPH top speed. Those are race car numbers that no other road-going sedan in the Charger's price range can match. The 8-speed automatic transmission shifts quickly and is a solid match for the brutal power from the Hellcat's supercharged engine.

The Charger’s ride is quiet and composed and the interior comfort benefits greatly from plenty of sound deadening. With the larger 20-inch wheels equipped, road obstacles like cracks and small potholes become more noticeable, but not unpleasant. Some drivers may find that the SRT Hellcat's Hemi V8 is loud at highway cruising speeds. Several reviewers note that the noise can become tiresome on longer trips, but is very satisfying under heavy acceleration.

Front and rear visibility take a hit from large pillars at both ends of the vehicle. Reviewers have noted difficulty when turning and changing lanes.

The Charger can be relatively fuel-efficient with the base V6 engine in place, rated at up to 30 mpg on the highway and 19 mpg in the city. These numbers place the Charger right in line with most others in the segment, like the Nissan Maxima and Genesis G80. The Buick Lacrosse is the most fuel-efficient of the group with up to 35 highway mpg in certain trims.

All three of the V8 engines struggle to achieve 25 mpg on the highway and fare much worse in city driving, ranging between 13 and 16 mpg. The performance tradeoff here is steep, but there are no other vehicles in the segment that offer rear-wheel drive and a V8.

As of 2019, the Charger’s overall design is nearly ten years old. There are plenty of more contemporary options in the segment, but Dodge has made updates to the Charger over the years to keep it relevant and appealing.

With an MSRP of $29,220 before destination charges, the Dodge Charger is considered to be a good value. Base SXT models are well-equipped and they mostly deliver the utility that full-size sedan buyers expect. Standard features include LED daytime running lights, Apple CarPlay/Android Auto, USB inputs, folding rear seats, cruise control, the 3.6-liter Pentastar V6 engine, and rear parking sensors. All-wheel drive adds $4,000 to the price. This starting price is also in line with other vehicles in the segment and even undercuts some, like the $32,000 Maxima.

The Charger GT has an MSRP $31,495 and includes 20-inch wheels, performance seats and steering wheel, and remote keyless entry/start.

The Charger Scat Pack has an MSRP of $39,995 and has a 485-horsepower 6.4-liter V8 Hemi engine, Brembo brakes, and SRT performance upgrades.

Even the SRT Hellcat, with its $67,245 price tag can be considered a bargain. It is equipped with a 707-horsepower supercharged 6.2-liter Hemi V8, has a 204 MPH top speed, and plenty of performance parts. No other sedan offers near-supercar levels of performance at the Hellcat’s price point. The nearest rivals would be the BMW M5 or a Mercedes-AMG, both of which are much more expensive.

In addition to the several trim levels and options, the Charger also has packages that can be added to upgrade looks and performance. The Daytona package is available with the R/T and R/T Scat Pack trims and has special interior leather, Daytona exterior decals and paint, upgraded lighting, and 20-inch wheels.