The Corvette C6 is the sixth generation of Chevrolet’s two-seater sports car. It was sold between 2005 and 2013 and was replaced by the C7 Corvette.

The C6 had updated styling, new technology, upgraded suspension, and a larger engine over the previous C5 Corvette. Compared to its predecessor, the passenger compartment of the C6 was bigger, the overall car was shorter by about five inches and the wheelbase was longer, to improve handling and ride quality. The C6 was also the first generation Corvette to feature exposed headlights since 1962.

Development of the car began in 2000, with the goal being to “tighten” the body design to make it smaller and more space-efficient while keeping a clear visual tie to previous models. At the time, the Corvette engineering team stated the goal was not to invent a totally new car, but to perfect the details that were already in place.

The C6 Corvette was introduced as both a coupe and convertible, for the first time since 1968. All versions of the hardtop coupe C6 came with a removable panel in the roof for a targa-style experience.

The LS2 engine under the C6’s hood was all-new and produced 400 horsepower and 400 pound-feet of torque. It was paired with either a six-speed manual or an automatic transmission. In 2008, the engine was updated again, this time to an LS3. Displacement increased to 6.2 liters and power jumped to 430 horsepower and 424 pound-feet of torque. Combined with the lighter weight of the car, performance was improved greatly over its predecessor, with 0-60 mph times of just over four seconds.

The Corvette C6 was rated at just 15 mpg city with an automatic transmission and 16 mpg with a manual transmission. In order to avoid a gas guzzler tax, Chevrolet updated the manual versions of the car with a computer-aided gear shifting system, which allowed the driver to shift directly from first to fourth gears at low speed. This bumped the fuel economy ratings enough to avoid the tax threshold.

At the time, even the standard Corvette C6 was well-liked by critics and the public. Reviewers liked the car’s improved handling, stronger engine, and improved interior. Ride quality was noted as being impressively smooth and balanced. Critics praised the car for having improved on the previous Corvette C5 in nearly every way, from performance to refinement to comfort. The Corvette C6 was regarded as a bargain, with one reviewer noting that anything within $20,000 of the Chevrolet would have a very hard time beating its performance. The Porsche 911 at the time was several thousand dollars more than the Corvette and could not match its performance.

Today, the Corvette C6 is still regarded as a pre-owned sports car value. Prices for well-kept examples hover between the $30,000 and $40,000 marks, and the performance is comparable to many new cars costing thousands more. Early models are noted as being plagued with quality and mechanical issues, but later versions do not have those problems. Used car shoppers will find an easy time locating several great examples of the C6 on eBay and elsewhere. Even performance-modified versions like the Callaway Corvette are relatively easy to find. 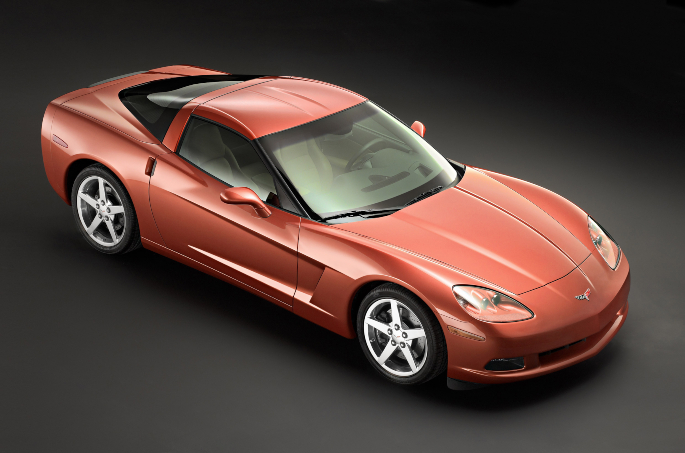 Later in its first year of production, the C6 became available in a high-performance Corvette Z06 model. It was equipped with the largest small-block engine ever made: A 7.0-liter called the LS7 V8. The engine produced 505 horsepower and 470 pound-feet of torque. A dry-sump oil system and titanium alloy connecting rods were fitted to the engine.

The Z06 coupe’s frame was constructed out of aluminum, which saved 136 pounds over the standard C6’s steel frame. Suspension components got an upgrade too, as the springs, shocks, and anti-sway bars were stiffer. The C6 Corvette Z06 models were visually differentiated from their standard counterparts with a unique front fascia, different front fenders and wider, unique wheels - though the resulting car was not necessarily a widebody.

The Z06 was so popular at launch that dealers had a hard time meeting customer demand. In some cases, cars were documented as having been sold for thousands above MSRP.

The Corvette C6 ZR1 took the Z06’s performance up yet another level. The Corvette ZR1 had been rumored for years before actually being confirmed by anyone at Chevrolet or GM, eventually leaking out under the codename “Project Blue Devil”.

As we see with the Corvette C8 today, spy photographers caught the C6 ZR1 being tested in camouflage and began leaking photos of parts well in advance of the car’s actual announcement. In 2007, General Motors started releasing details of the project publicly. In December of that year, the car was officially announced with photographs and details.

The Corvette C6 ZR1 came with a supercharged 6.2-liter LS9 V8 that had 638 horsepower and 604 pound-feet of torque. Autobahn testing of the car showed a top speed of 192 mph, but Chevrolet claimed the ZR1 could actually reach a top speed of up to 205 mph.

The C6 ZR1 was built with a great deal of carbon fiber. The roof, hood, fenders, rocker moldings, and front splitter were all made out of the very strong and lightweight material. The hood came with a polycarbonate window, which allowed the intercooler to be seen from outside the car. Carbon-ceramic brakes with blue calipers were added, as was magnetic ride control. The system used sensors to automatically adjust stiffness levels based on road conditions and vehicle performance. 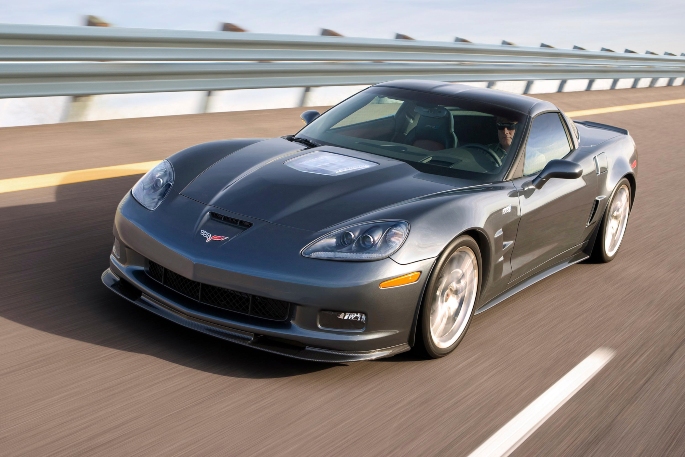 In 2010, a Grand Sport model was announced at the 12th annual Corvette Birthday Bash at the National Corvette Museum. It was fitted with several enhancements over the standard Corvette C6, including a new manual transmission with different gear ratios, larger anti-sway bars, stiffer springs, updated shocks, a larger spoiler, a transmission cooler, brake cooling intake ducts, and unique wheel designs.

The Corvette C6 was (and still is) a successful car in motorsports events around the world. The C6.R was a car built by Pratt & Miller as a race-only model based on the Corvette C6. Race organizers will often require that cars entered for competition meet homologation requirements. These rules state that, in order to be raced, a car must also be produced for street use and meet certain production numbers. The C6.R had a unique benefit over its predecessor, in that it was developed alongside its street-going counterpart, the Corvette C6. This meant that it could be designed more aggressively with fewer restrictions, as many of the race-inspired engineering could be added to the standard C6 along the way.

The road and race cars both benefitted from this arrangement. The race cars were able to be fitted with aluminum frames from the road cars, which reduced weight. Both cars’ fixed headlight units reduced drag and further cut weight. The Z06 benefitted as a high-performance model, as it was able to be upgraded with parts and designs directly from the racing engineers.

The C6.R was lauded as an innovative engineering project at the time. The car’s engine, while not from a road-going Corvette C6, was closely related to the LS7 from the Z06. It won awards for its performance and endurance abilities. The engines also featured a cylinder deactivation feature that would activate during caution periods to save fuel, much like road cars on the highway today. Like many race cars, the C6.R did not have a rear window – a result of the car’s bodywork and fuel tank placement. To help improve visibility, a camera was placed in the rear bumper and a monitor was mounted inside the cockpit, which gave the driver a rear view without relying solely on the side view mirrors. The C6.R also had an air conditioning system, which helped drivers deal with the extreme temperatures that are generated inside a race car.

The C6.R was unveiled at the 12 Hours of Sebring race in 2005 and landed at second and third in its class at that race. It was displayed later that year at the New York International Auto Show, along with the Corvette C6 Z06.

In 2006, the car won both American Le Mans GT1 Championships, and the next year it won the GT1 class in the 12 Hours of Sebring race. Through 2009, the cars won several other championships before being retired. A GT2 version was developed and run after that, and the C6.R was also available for sale to private racing teams. 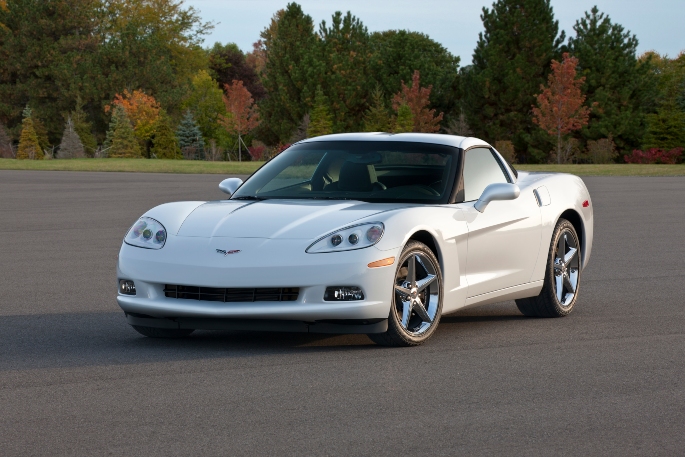 Several limited-run versions of the Corvette C6 were made to commemorate special events or drive sales.

Corvette ZHZ
In 2009, the C6 was released as a ZHZ limited edition for the Hertz Corporation. The cars had an LS3 engine, a six-speed automatic transmission, and yellow paint with a wide black stripe. Only 500 cars were produced: 150 targa tops and 350 convertibles.

Summary: The Chevrolet Corvette C6 is the sixth generation of the brand's iconic two-seater sports car. It was sold between 2005 and 2013 and replaced the outgoing C5 model. The cars featured a brand new engine, updated electronics, more refined suspension geometries, and lighter construction over their predecessor. Performance from the Corvette C6 rivals many new cars today, with acceleration reaching the low four-second range. The cars were released in several versions, many of which were higher-performance than the original. The Z06 and ZR1 are the two most popular and widely-available versions of these cars, each with a stronger engine and upgraded performance over the standard Corvettes. At the time, the C6 was praised for its refinement and sheer speed, which matched or beat cars that cost several tens of thousands of dollars more than the Chevrolet. The Corvette C6 is still regarded as a good car today, with many critics regarding it as a used car bargain.

Next Up: Corvette C7