Just because a car is cheap doesn't mean it's low-quality. For under $5,000, you can find reliable cars in the pre-owned market from just about any automaker, including vehicles that are less than a decade old. Here are some of the best used cars available for under $5,000, as of 2019.

Finding the best cars in a low price range has never been easier, thanks to Kelley Blue Book, Autotrader, and other online services that research and evaluate cars. When looking for a cheap used car, keep in mind that you don't have to settle for a clunker. It's expected at this price the vehicle has 100,000 to 150,00 miles on it. Ditto if the car has scratched paint, minor stains on the back seat or other signs of wear. However, you shouldn't pay $5,000 for a car that's been in a severe accident or has significant wear-and-tear, especially when there are so many better options. Ideally, you want a car that's had regular, high-quality maintenance over its lifetime, and take time to review maintenance and repair records before making a purchase. If the seller doesn't have these records, that's a red flag. Also, check the car's state inspection sticker to make sure it's up to date, if applicable.

Before buying a used car for under $5,000, remember to run its vehicle identification number through a vehicle history report service such as Carfax. That provides U.S. and Canada customers access to service records, accident histories and other information on pre-owned vehicles. You might want to avoid cars that have had significant repairs or part replacements, as they may have unreported safety issues or require expensive maintenance. Consider hiring a mechanic to inspect the vehicle before you buy it. Since price is a crucial factor, you should also look for a fuel-efficient car. Always find out how much a car's fuel economy has declined with age, so you don't sabotage your bottom line by paying through the nose for gasoline. Private sellers often have better deals than used car lots, even though they don't certify their vehicles as often. If you want a reliable used car for less than $5,000 and can pay for it with cash, you should buy the car from a private seller. 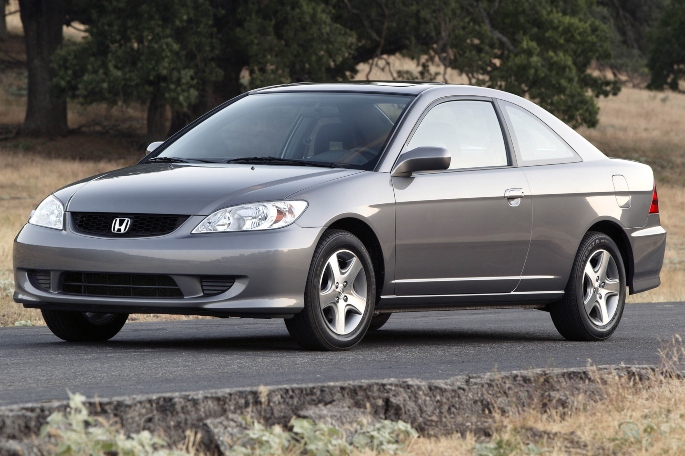 A benchmark of compact cars, the Honda Civic is one of Autotrader, Trusted Choice and Kelley Blue Book's picks for a great used car available for under $5,000. The 2005 Honda Civic, in particular, is a fuel-efficient and eco-friendly choice, featuring 1.7-liter 115-horsepower four-cylinder engines on base models. The 2007 Honda Civic achieved perfect crash test ratings from the National Highway Traffic Safety Administration and rides smoothly and quietly. The LX model includes power windows, keyless entry, power door locks and many other features.

For the eighth generation of Honda Civics (2005 to 2011), Honda divided the model into both a sedan and coupe platform and a hatchback platform containing the more streamlined rear suspension of the Honda Fit subcompact. The U.S. has over 7 million Honda Civics on the market, and Honda has sold over 300,000 of them to Americans every year in the last 10 years. Finding one for less than $5,000 should be easy. 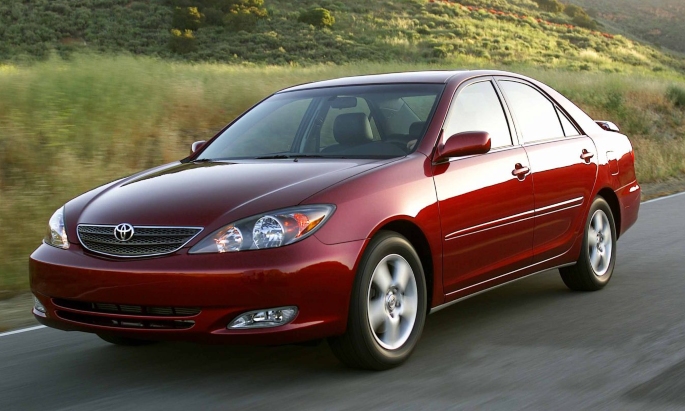 Since its release in 1982, the Toyota Camry has been one of the most popular cars in many countries every year. The Camry was the bestselling passenger car from 1997 to 2016, aside from 2001, and it has an outstanding reputation in Eastern Europe, the Middle East, and Australia, among other places. The 2003 Toyota Camry is a Kelley Blue Book favorite for used cars under $5,000, and it's easy to see why. A midsize sedan, the Camry has a roomy back seat and trunk and both four-cylinder and V6 engines on offer. Plus, it's one of the most long-lasting and reliable cars on the road. In 2010, nine out of every 10 Camrys sold in the previous 15 years were still being driven, despite the vehicle's unremarkable styling. Autotrader alone has hundreds of Toyota Camrys from 2002 to 2006 available for under $5,000, and both Autotrader and Trusted Choice include Camrys from those model years on their Best Used Cars Under $5,000 lists. 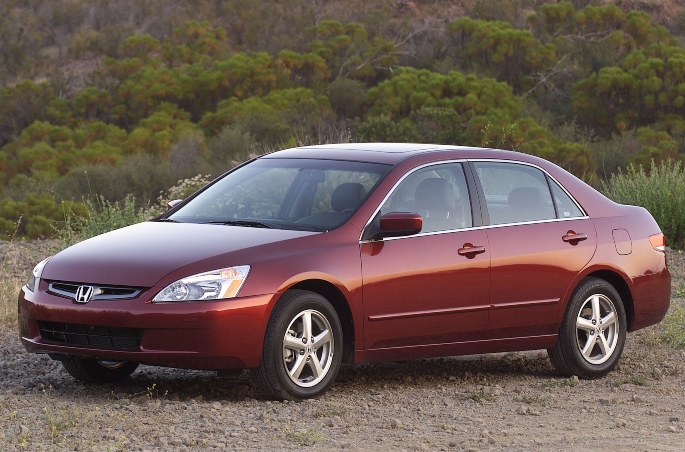 Another Kelley Blue Book favorite, the 2004 Honda Accord is quiet and smooth, with decent handling and a lot of cargo area in its back and trunk. A four-door sedan, the 2004 Accord received perfect NHTSA crash test ratings for its front driver and passenger seats and near-perfect ratings for its side driver and side passenger seats. The base model of the 2004 Accord features a 160-horsepower 2.4-liter four-cylinder engine. Also, both five-speed automatic and five-speed manual transmissions are standard for this model, with a six-speed manual option available. Like most Hondas, the 2004 Accord has a reputation for durability and reliability. As of 2019, CarsGuide lists Honda 2004 Accords selling for as low as $3,100, while Autotrader sells them for under $2,000. A used 2004 Accord that sells for less than $5,000 is a steal. 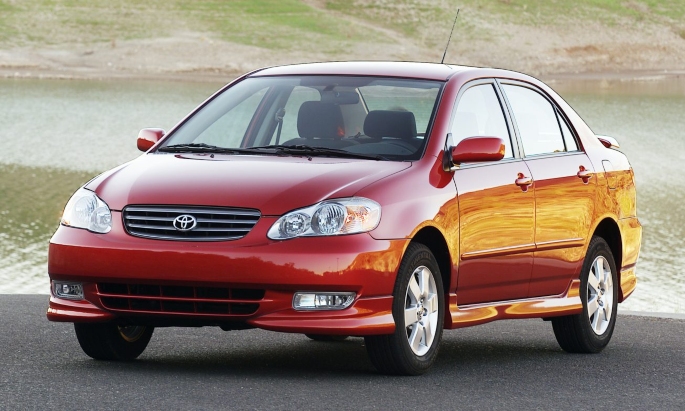 Much like Honda, Toyota makes cars that last, and the Corolla is no exception. Listed by Kelley Blue Book as one of the best commuter cars under $5,000, the 2004 Toyota Corolla has an excellent fuel economy and a reasonably powerful four-cylinder engine. CarsGuide lists used 2004 Corollas selling for as low as $1,856 and used 2005 Corollas selling for as little as $1,950. The Toyota Corolla is the best-selling nameplate on Earth, having overtaken the Volkswagen Beetle. Over 44 million Corollas were sold between the model's debut in 1966 and 2016, so they're easy to find. Both the 2004 and 2005 models are compact cars. Although the Corolla began as a rear-wheel-drive car, both front-wheel and all-wheel-drive cars are now available. When it comes to durability, even many new cars struggle to compete with decade-old Corollas. 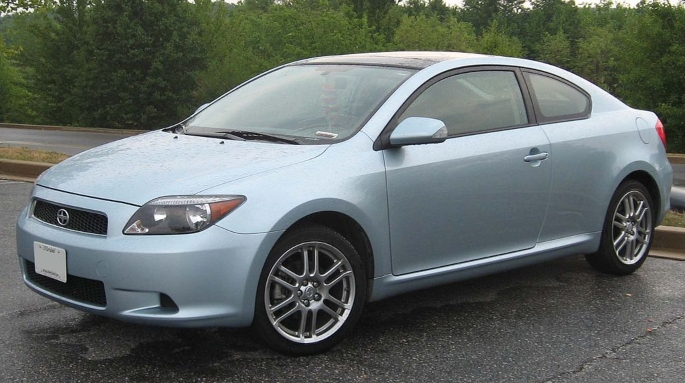 A compact Toyota car, the Scion tC stands for "touring coupe" and shares its chassis with the Toyota Avensis, a midsize family car. The Scion tC from the 2005 to 2010 model years has numerous bells and whistles, including keyless entry, a panoramic moonroof, and a Pioneer sound system with a CD player. This car was sold in striking colors as well, such as purple and bright blue. The NHTSA crash test ratings for the 2006 Scion tC were perfect for the front driver and both rear seats and near-perfect for the front passenger seat. Also, 2008 and newer models feature seat-mounted side torso airbags along with knee airbags for the driver and rear and front side curtain airbags. The Scion tC also has cruise control, mirror-mounted turn signal lights, and four-wheel anti-lock disc brakes. As of 2019, there are about 150 Scion tCs from the 2005 to 2010 model years on Autotrader. 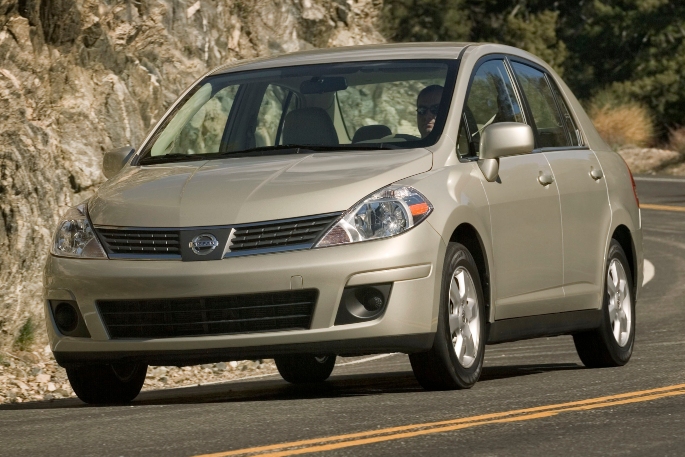 Autotrader lists the Nissan Versa from the 2007 to 2011 model years as one of the best cars available for under $5,000. The Versa can get 30 miles to the gallon due to its small, efficient engine, ensuring owners can enjoy inexpensive commuting. Available in both sedan and hatchback forms, the Versa was named for its versatile space, and the cars in this generation are called Tiidas. Tiida sedans have four doors, while Tiida hatchbacks have five. Autotrader has over 200 Versas from these model years available for sale under $5,000. Despite its subcompact size, the Nissan Versa feels spacious and has configurable cargo arrangements for your convenience. In addition to a four-speed automatic and six-speed manual transmission options, the North American Versa has a continuously variable transmission option. 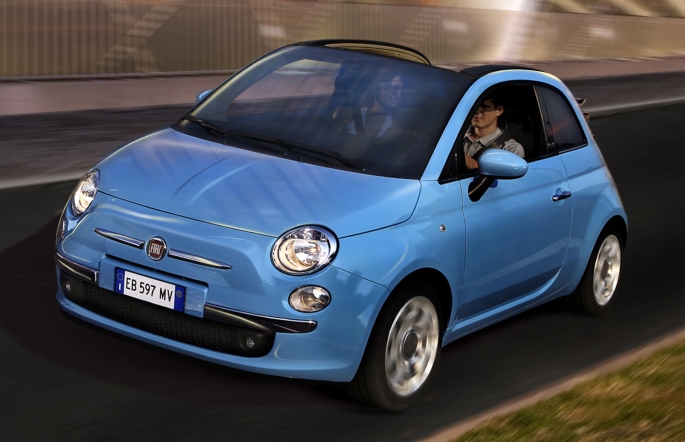 Designed in Italy and built in Mexico, the Fiat 500 is a compact four-passenger city car with both two-door cabriolet and three-door hatchback designs. Autotrader and Trusted Choice both list Fiat 500s from 2008 to 2015 as some of the best cars you can get for less than $5,000. Capable of achieving an mpg in the low 30s in the city and the high 30s on the highway, the Fiat is fuel-efficient and reliable. This car also has a fun retro feel inspired by the Fiat 500s built between 1957 and 1975, which were less than 10 feet long and contained air-cooled two-cylinder engines. 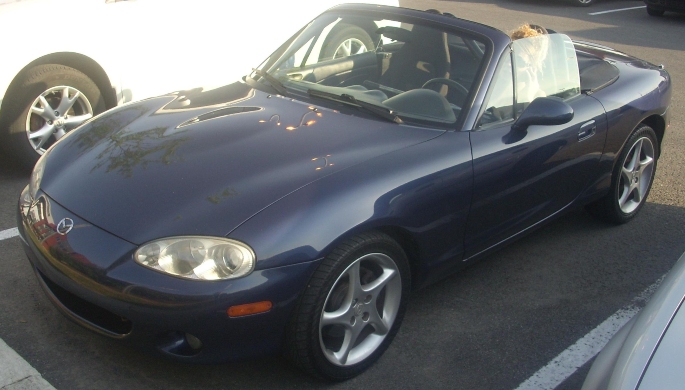 The Mazda MX-5, known as the Mazda Miata in North America, is an excellent choice for under $5,000. Although Mazda MX-5s have been produced since 1989, the 2003 Miata offers the best bang for your buck. It's a lightweight, two-passenger roadster with an extremely user-friendly convertible top and a powerful 182-horsepower 1.8-liter four-cylinder engine capable of producing 125 lb.-ft. of torque. This model handles very well, and its curb weight is less than 2,400 pounds. 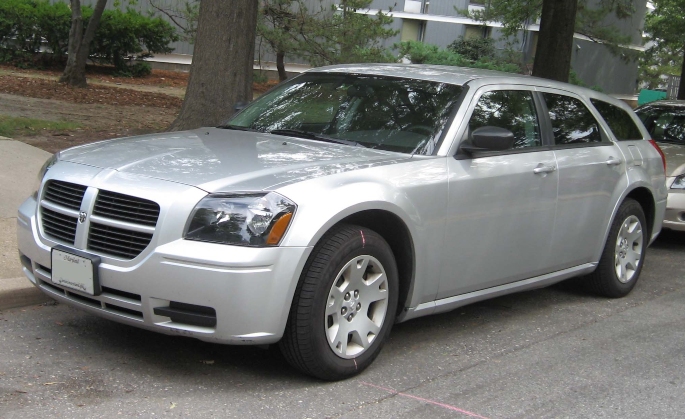 A five-door station wagon based on Chrysler's large rear-wheel-drive platform, the 2005 Dodge Magnum was one of the best cars released that year – even showing up on the "Car and Driver" Ten Best list for 2005. The sharp lines and commanding look of the car project confidence, and it comes with keyless entry and cruise control. Some 2005 Dodge Magnums even include a navigation system and all-wheel-drive, as well as the option of the famed Hemi V8 engine. V6 engines were also available. 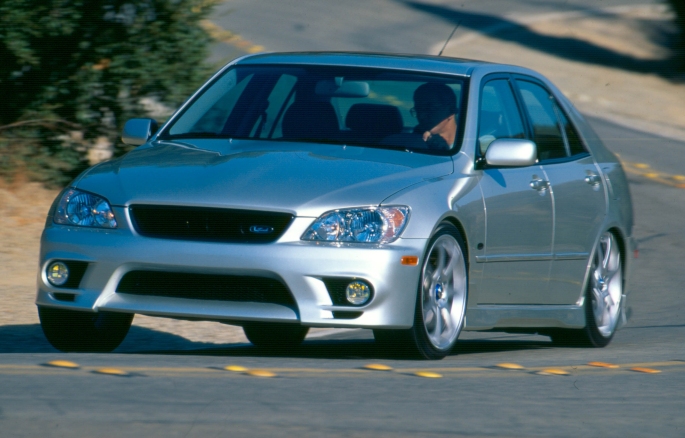 If you're looking for a compact executive car for less than $5,000, you could do a lot worse than a 2002 Lexus IS 300. Like most cars in Toyota's Lexus luxury vehicle division, the IS 300 has a beautiful appearance, with sleek, clean lines and neat edges. The IS 300 handles well, and all models receive a 215-horsepower, six-cylinder engine capable of producing 218 lb.-ft. of torque. The vehicle also features a roomy trunk and a five-speed automatic transmission.

These 10 cars are some of the best you can find on the pre-owned market for under $5,000, but there are many more great options. For example, the Honda CR-V from model years 2002 to 2006 is an Autotrader pick for its reliability and all-wheel drive. This car's signature is a rear-mounted spare tire, and its clean design and side-hinged rear door make it a visually striking choice. The 2003 Acura RSX, another Honda-designed car, is a great option if you want a sporty coupe with sharp handling and a sturdy build. You might also like the 2003 Acura TL, a Trusted Choice and Kelley Blue Book pick, or the Honda Beat for its convertible top and three-cylinder engine. If you prefer Toyotas, you might look into the 2002 Toyota MR2 Spyder, a small roadster with a front-wheel-drive powertrain behind the seats. The Spyder has a curb weight of less than 2,200 pounds, skipping storage space in favor of a pleasant time behind the wheel.

An Autotrader and Trusted Choice pick, the Toyota Sienna minivan from the years 2004 to 2010 is another excellent yet affordable option. One of the safest vehicles of its era, the Sienna can seat eight people at a time, making it ideal for large families. Some Siennas also have all-wheel-drive. For another safe used car under $5,000, consider the 2006 Ford Crown Victoria. A large rear-wheel-drive sedan, this car is the staple of police officers and taxi drivers, as it absorbs damage well. The 2007 Ford Taurus might also be up your alley. Highly reliable, this car began as a fleet vehicle exclusively. It has plenty of space in its trunk and interior and comes standard with a V6 engine. Other good Ford cars you can find for less than $5,000 in the pre-owned market include the Ford Focus (2008 to 2011), the Ford Escape (2001 to 2007) and the Ford Mustang (2004).

Although $5,000 might seem too low of a price point for quality used cars, the market is full of different models and types of cars that meet the requirement. You just have to know where to look.