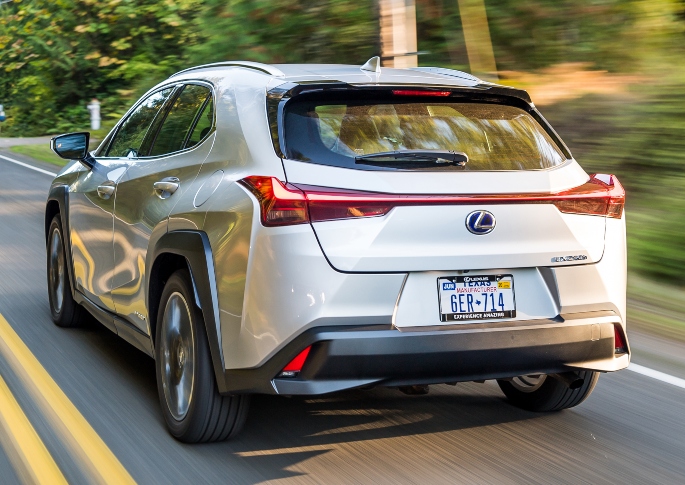 The UX is a new crossover from Lexus for the 2019 model year. It slots into the lineup below the NX and RX crossovers as the smallest and most affordable crossover the brand makes. It’s aimed at new car buyers that want a compact premium SUV at a reasonable price, and it’s offered in both a gas and a hybrid model.

Each model is available in three trims: base, F Sport, and the range-topping Luxury trim. Just like everywhere else in the crossover world, the compact luxury segment has become ultra-competitive over the past few years; the UX’s main competitors are the Volvo XC40, BMW X2, Mercedes GLA, Infiniti QX30, and the Audi Q3.

The UX F Sport, like other Lexus “F” models, comes with sport seats, sportier suspension, and other design touches that make it more aggressive than the other models. The powertrain remains untouched, though, as the F Sport trim is an appearance-only upgrade.

Gas-powered models all have a 2.0-liter inline-four cylinder that makes 169 horsepower, routed to the front wheels via a CVT gearbox that mimics a 10-speed automatic transmission.

UX Hybrid models come with a 2.0-liter engine with a hybrid system that makes 181 total system horsepower. All-wheel-drive is standard for hybrid UX models, and like its gas brethren, this hybrid uses a CVT gearbox. 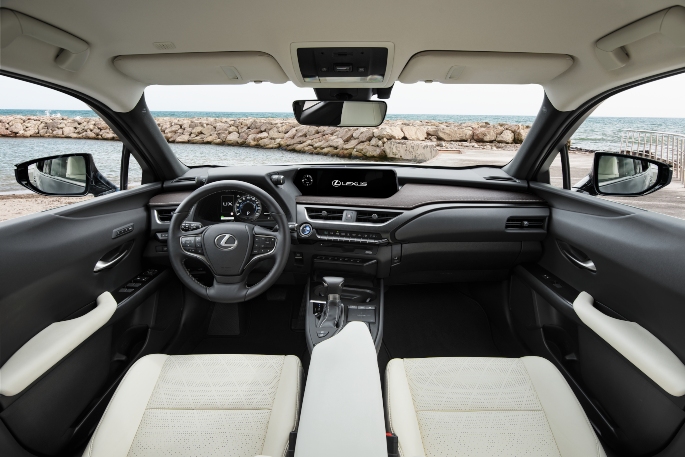 TLDR: Solid fuel economy, an upscale interior, and a luxury-quality ride all rolled up in a compact package.

Ride: The UX’s size and stance might lead you to believe that it’s a sporty and athletic crossover, but the ride is subdued and luxurious. There are very few bumps and bangs that the UX’s suspension can’t handle, and it’s quite serene on long trips.

Fuel Economy: A small crossover is expected to deliver decent fuel economy, and UX hits the mark here. The gas-powered model is rated by the EPA at 29/37/33 MPG city/highway/combined, while the hybrid models reach 41/38/39 mpg with all-wheel drive. Those numbers aren’t just competitive for crossovers; they’re reaching into compact sedan territory.

Interior: Though there’s cloth in the most basic models, the two-tone interiors found in upgraded trims is comfortable and feels like it’s meant for a more expensive vehicle. The leatherette upholstery feels premium and remains comfy on long haul drives. The F Sport trim has heavily bolstered sport seats that may be too tight for larger people, but are otherwise very comfortable. 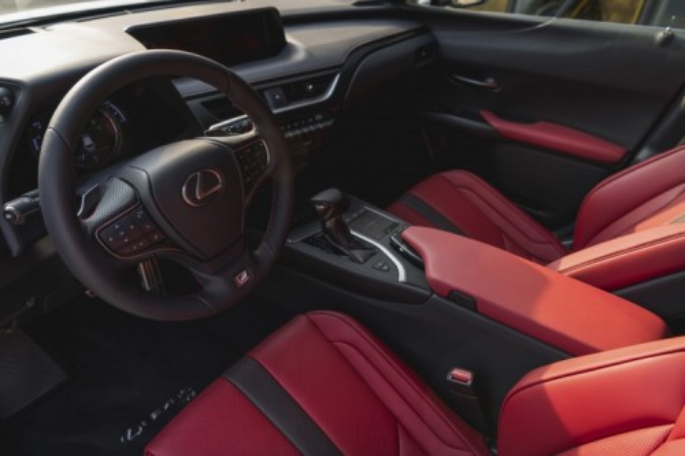 Terrible Infotainment: The UX is one of the first Lexus or Toyota vehicles to get Apple CarPlay, and it also has a great deal of standard tech and safety features. Even so, basic operation of the infotainment system is infuriating and confusing. There are a variety of menus to sift through, and the touchpad system is more than burdensome, especially when the vehicle is on the move. It’s too distracting to use in almost any situation and draws attention away from the road. 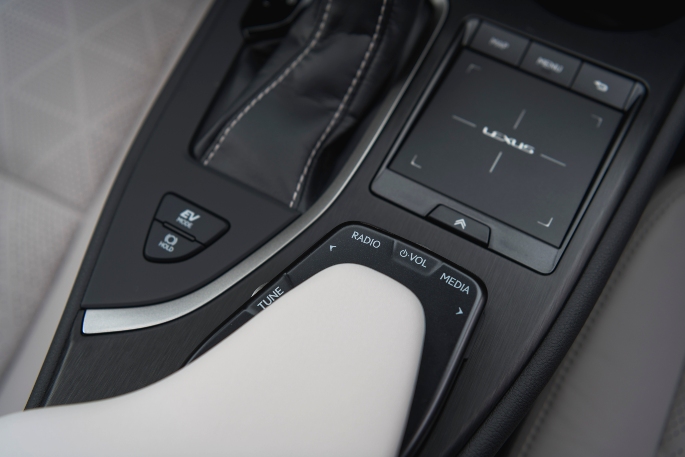 Underwhelming power: It’s clear that the UX was designed with fuel economy in mind, as it often feels like there’s not enough power on tap. The standard four-cylinder engine doesn’t move off the line very quickly but is competent at highway speeds once it gets there. The hybrid delivers 181 horsepower, which sounds like more but still won’t inspire many giggles with the pedal to the floor. 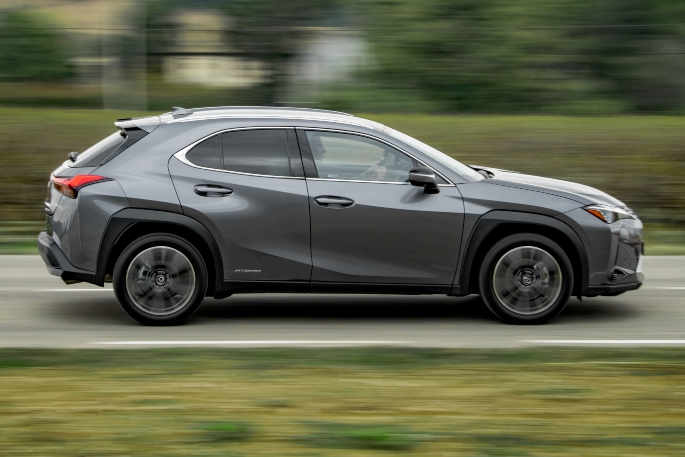 The UX 250h adds all-wheel drive and the aforementioned hybrid powertrain, and it has the same features as the base gas model, with a starting price of $34,350 before destination.

The UX Luxury has a starting price of $37,500 before destination and adds a 10.3-inch infotainment screen with navigation, memory seats, a power liftgate with foot sensors, heated and ventilated front seats, blind-spot monitors, rain-sensing windshield wipers, a power moonroof, and acoustic glass.

The Lexus UX 250h Luxury carries the same features and has a starting price of $39,350.

If it were our money, we’d buy the UX 250h F Sport, as it comes with a fuel-sipping hybrid drivetrain, all-wheel drive, a sporty interior, and an excellent hybrid powertrain. 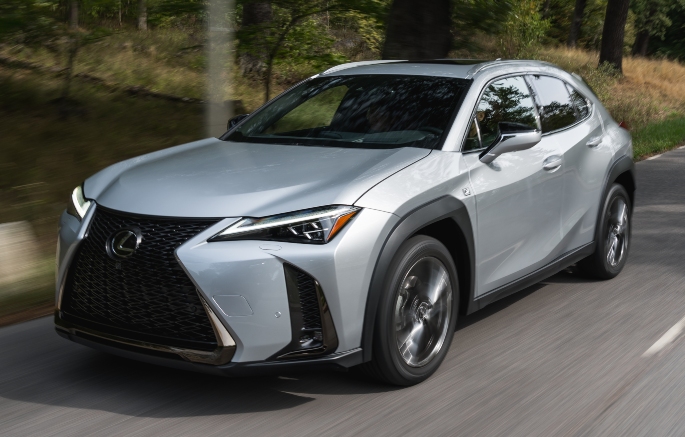 The Audi Q3 was redesigned for 2019, and while it’s more expensive, it comes loaded up with great features and a sporty ride. It’s got all of the great stuff that its larger siblings have at a much lower price.

The BMW X1 has a solid powertrain, plenty of cargo space, and a decent price tag. It gets expensive quick with options, so the entry-level models are best.

The Infiniti QX30 has attractive styling, great handling, an upscale interior, and a good price. That said, it gets expensive with options, easily topping $40,000. The QX30 rides on the same underpinnings as the Mercedes-Benz GLA, which is similarly priced. Either could easily be confused with a slightly larger hatchback car.

We would pass on the subcompact Buick Encore, MINI Countryman, and most anything over $40,000 in this segment – looking at the Porsche Macan. At this price point, several midsize to large sedans could be considered as well, like the Lexus ES, BMW 3-Series, or Audi A4.