A 245-horsepower, turbocharged 2.0-liter four-cylinder with all-wheel-drive and six-speed automatic. 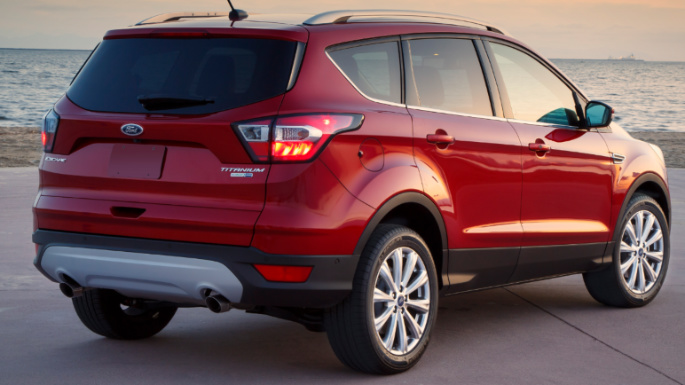 The Escape gets a host of new safety and driver assistance features to the table, including Android Auto, Apple CarPlay, and an electric parking brake. The nose and tail have undergone a few styling tweaks, and two optional turbocharged engines have come along for the ride. The base engine is a 2.5-liter inline four-cylinder. A six-speed automatic transmission and front-wheel drive come standard with the 2017 Ford Escape, and all-wheel-drive is also available. A SYNC 3 touchscreen infotainment system with voice command and smartphone integration makes driving fun.

Aimed at small to medium-sized families, the 2017 Escape makes for an ideal family hauler while also offering some towing capacity and reasonable cargo space for practical use. This SUV comes in three trims: S, SE, and Titanium. 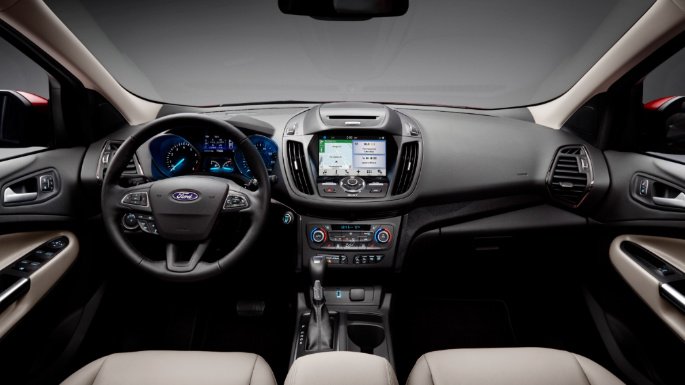 The Insurance Institute for Highway Safety (IIHS) gave the 2017 Escape a Good rating for four out of five crash tests but a Poor rating for the small front overlap test on the passenger's side, far worse than most new cars. The IIHS also gave the vehicle's forward collision prevention the lowest Basic rating. By comparison, the National Highway Traffic Safety Administration (NHTSA) gave the Escape five stars in overall testing, its highest rating. 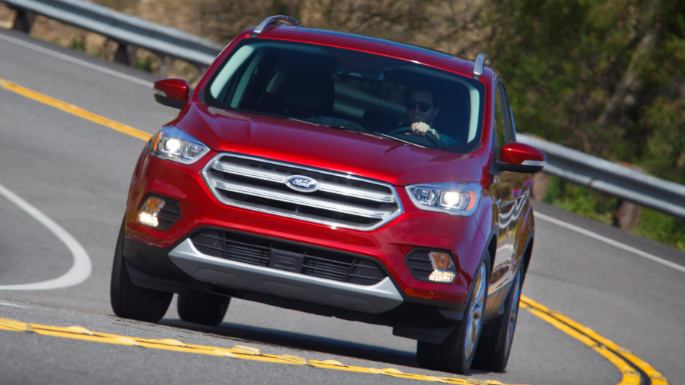 Despite middling fuel efficiency and some safety issues, this SUV has more standard tech features and a smoother ride than most other vehicles in its class. The Honda CR-V is safer and more fuel-efficient than the Escape, but it's more expensive and lacks the Escape's power.

Meanwhile, the Mazda CX-5 can't beat the Escape's power and lacks a comparable infotainment system, but it also handles a bit better and saves more money at the pump. 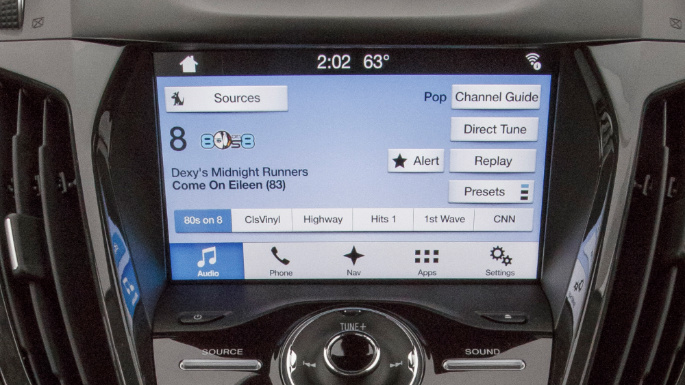 The 2017 Ford Escape has no shortage of standard tech features, including the 4.2-inch touchscreen infotainment system with AppLink smartphone integration and a voice command system. It's an improvement over the last design. The Escape also sports LED headlights, Bluetooth, and a six-speaker audio system. Other standard features include a USB port, remote keyless entry, and MyKey programmable key.

Optional tech amenities include exterior keypads for the door locks, SiriusXM satellite radio, a hands-free power liftgate, and LED daytime running lights. Additionally, you can get dual-zone automatic climate control, an SD card reader, push-button start, voice-activated navigation, a moonroof, and a panoramic sunroof. The touchscreen can be enlarged to 8 inches with the Sync 3 infotainment system.

Two USB ports, Apple CarPlay, and Android Auto capability are optional, as are automatic wipers, RCA jacks, a memory system for the driver's seat and mirrors, the SYNC Connect smartphone app, and a foot-activated liftgate. Other optional tech amenities for the 2017 Ford Escape include heated front seats, remote entry and start, SiriusXM Traffic with Travel Link, HD radio, and a 110-volt household-style power outlet, as well as a six- or 10-way power front passenger seat. Finally, nine-, 10-, and 12-speaker sound systems are on offer for this vehicle. 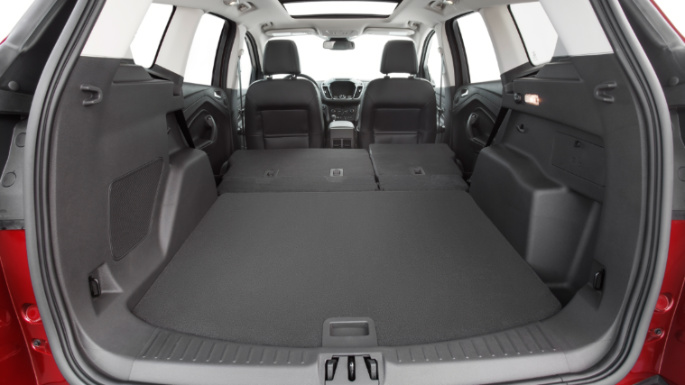 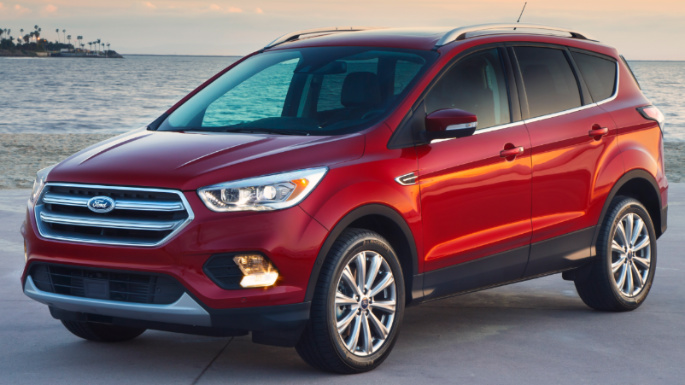 Compared to the outgoing model, the 2017 Escape is a bit bigger, with a new hood and larger grille. This SUV is 178.1 inches long and has a wheelbase of 105.9 inches. This model has a handsome, friendly look, according to reviewers. It lacks the boxy, aggressive styling of prior models.

Along with LED taillights, the base model has 17-inch steel wheels with plastic covers. Higher trims offer 17-inch alloy wheels as well as 19-inch Ebony Black premium painted aluminum wheels. Several other exterior styling touches are optional, including a black headlamp, blackened grille, and darkened headlight and taillight trim. Heated and leather seats are optional for the Escape, and power-adjustable driver and passenger seats with lumbar support are also available for extra comfort. The steering wheel comes in heated, leather-wrapped, and tilt-and-telescoping versions.

Reviewers agree that this SUV's interior is comfortable thanks to quality soft-touch materials and plush seats. The headroom is excellent in both the front and back, though the legroom could better. The instrument cluster looks a little dated, but it's plenty intuitive. 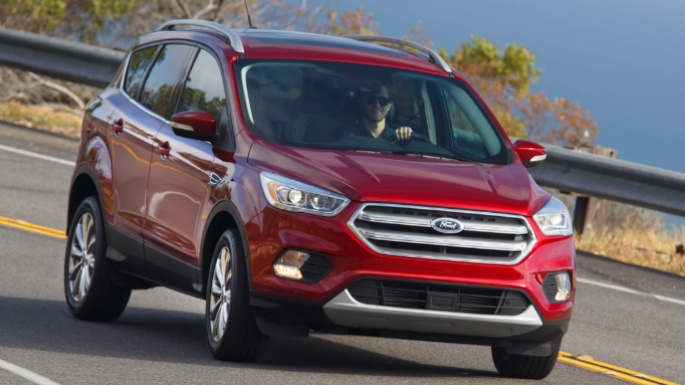 Sitting in the base model of the 2017 Ford Escape is a 168-horsepower, 2.5-liter inline four-cylinder engine capable of 170 lb-ft of torque and mated to front-wheel drive. However, this SUV also supports a twin-scroll turbocharged 2.0-liter EcoBoost engine with 245 horsepower and 275 lb-ft of torque and a turbocharged 1.5-liter engine capable of 179 horsepower and 175 lb-ft of torque. Skip the base engine, as it's considered to lack the verve of the 1.5 turbo. The 2.0 turbo is better for those looking for much more power or to tow.

The Escape handles well. Though some reviewers critique the steering for its artificial feel, the steering still gives enough feedback to satisfy most drivers. An advanced power distribution system keeps this compact crossover handling admirably under most weather conditions. Braking is a strong point, and not much road noise bleeds into the cabin. Parking is also painless thanks to several parking assistance features. 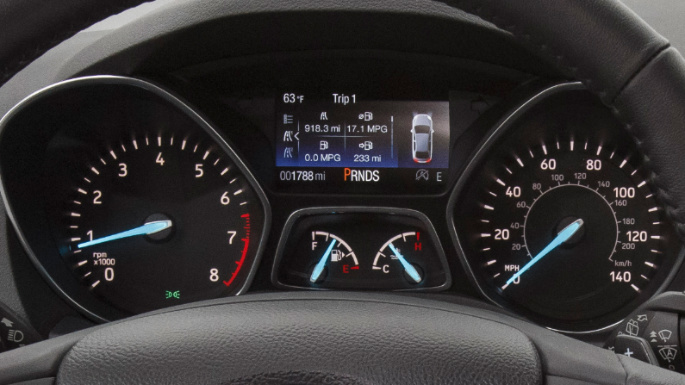 According to the Environmental Protection Agency (EPA), the 2017 Ford Escape with the 2.5-liter engine is estimated at 21 mpg city and 29 mpg highway, and 24 mpg combined. 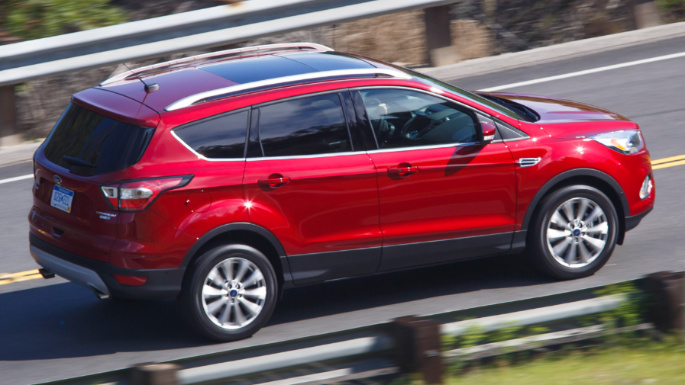 The Ford Escape S, which costs $24,645, may not be available at your local dealership, as it's targeted toward business fleet buyers. A 2.5-liter four-cylinder engine with 168 horsepower and 170 lb-ft of torque sits in the Escape S. This trim has front-wheel-drive and a six-speed automatic transmission. It also has SYNC 3 on a 4.2-inch touchscreen infotainment system with AppLink smartphone integration, a USB port, automatic headlights, and a six-way manually adjustable driver's seat. This trim also boasts 60/40 split-folding and reclining rear seats.

The 17-inch alloy wheels are the only option.

An optional 2.0-liter turbo four-cylinder engine is available for the SE, and it comes with 245 horsepower and 275 lb-ft of torque. Other optional amenities for the SE include rear air vents, an SD card reader, and the FordPass app. A hands-free power liftgate, all-wheel-drive, 18-inch alloy wheels, a panoramic sunroof, and voice-activated navigation with a larger 8-inch touchscreen.

For $1,995, you can get the Titanium Technology Package, which throws in a heated steering wheel, navigation system, supplemental PTC heater, 19-inch wheels, and bi-xenon HID headlights featuring automatic high-beam control. This package also features automatic wipers and an automated parallel and perpendicular parking feature with front and side parking sensors.

The Titanium's Cold Weather package offers a windshield de-icer, heated front seats and mirrors, and a 110-volt outlet. The SE's Sport Appearance package is also available for the Titanium.

So, which trim should you buy? The S, SE, and Titanium trims are all impressively equipped with standard features, but the SE offers the most bang for the buck. Although the Titanium has more features, there aren't enough to justify the higher cost.