The Ford Fusion is a four-door, five-passenger midsize sedan. 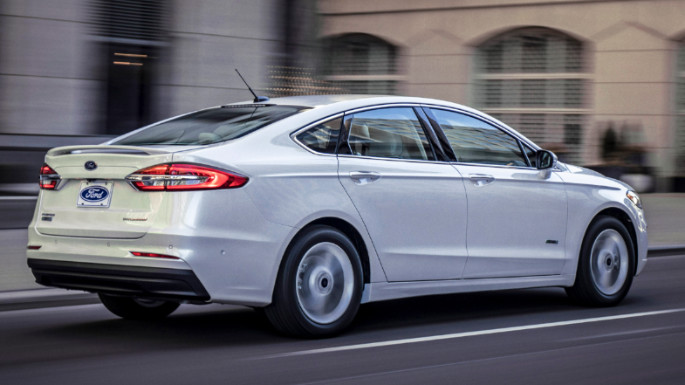 The Fusion is a midsize sedan and is targeted at new car buyers that want a plethora of choice and available all-wheel drive. It competes with the Honda Accord, Toyota Camry, and Nissan Altima.

After 13 years on sale, we’re finally seeing the end of the Ford Fusion, along with almost every other passenger car the company makes. The 2020 model year will be the Fusion’s last, as the car will join Ford’s Focus and Fiesta in the Discontinued Car Club. That will leave the Mustang as Ford’s only car, in addition to a wide variety of trucks, SUVs, and crossovers.

Though the Fusion is being discontinued, the fact that competitors like the Altima and Camry are now also offering all-wheel drive is an indication of how useful the feature is for a family sedan.

Before any of that happens, though, the Fusion is getting one heck of a swan song. It’s available with what can only be called a buffet of engine choices, several trims, and a list of available options that can satisfy almost any buyer.

The Fusion Hybrid is available in SE, SEL, and Titanium trims.

The Fusion Plug-In Hybrid is only available in the Titanium trim for the 2020 model year. Ford recently discontinued the Sport trim. 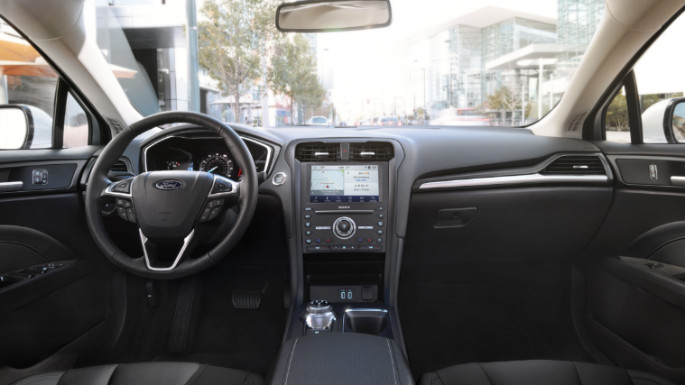 The Insurance Institute for Highway Safety (IIHS) rated the 2020 Ford Fusion Good in all crashworthiness categories. The Fusion’s headlights were rated ‘Poor,’ and the Latch system ease of use was rated ‘Marginal.’ The Fusion’s standard crash prevention system was good enough to earn a ‘Superior’ rating. 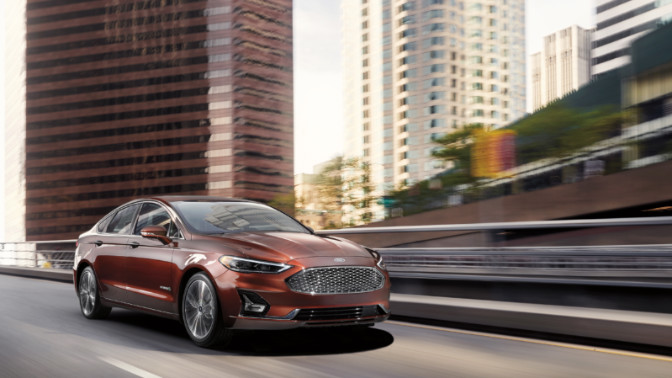 The Ford Fusion’s price tag grows quickly with options packages, powertrain upgrades, and trim level jumps, though its starting price of just over $24,000 offers you plenty to like. The hybrid models are the most expensive, but buyers don’t need to spring for those versions to have a good ride with decent fuel economy.

Middle trims offer great value without breaking the bank. The Fusion SE comes standard with power seats, a premium audio system, a responsive 1.5-liter EcoBoost engine, and more, for a starting price under $30,000.

The base S model is well-equipped but lacks key features like Apple CarPlay and Android Auto connectivity, as well as other convenience features that the other trims get. This starter Fusion is also awash with technologies that would feel more at home in a car from 2012 instead of 2020. The SYNC system is getting old at this point, and while it’s more than useful, there are better systems in competing cars for the same or less money.

At the top end of the Fusion lineup, the Titanium trim can reach nearly $40,000, while the Fusion Hybrid models (plug-in and regular) also get expensive quickly. Both hybrid models are slightly limited in trim choice, as the Plug-In is only available in Titanium trim, and the normal hybrid drops the lowest trims.

Thanks to those more expensive hybrid trims, the Fusion line offers phenomenal fuel economy in most of its forms. The base 2.5-liter engine in the S model can deliver up to 31 mpg highway, which isn’t the best, but it’s not far behind the gas mileage offered by rivals like the Camry. 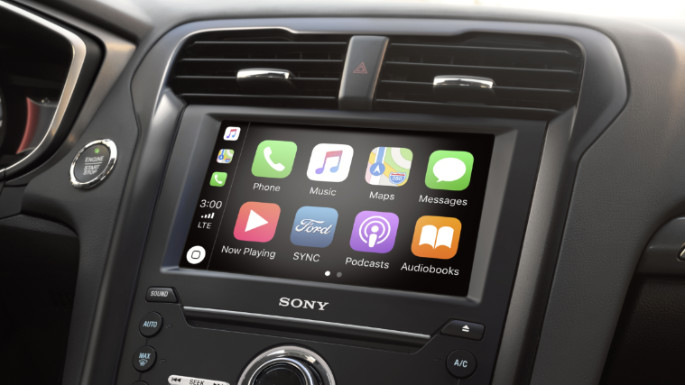 Ford’s SYNC 3 infotainment system is one of the most intuitive and easy-to-use interfaces on the market. It’s colorful and bright, which both make it easy to make a selection on the go.

On the lowest Fusion trim, Ford has included its SYNC system, which lacks many modern connectivity features and functionality that users have come to expect. Other vehicles have managed to do well with better systems in the same price range, so, unfortunately, this isn’t the case for the Fusion.

Standard features include an AM/FM stereo, MP3 capability, four speakers, Ford SYNC infotainment, two 12-volt outlets, and Ford’s MyKey system, which allows owners to set limits on vehicle operation based on which key is in use. The system is particularly useful for parents of teen drivers, as it can limit top speed and other factors like stereo volume. 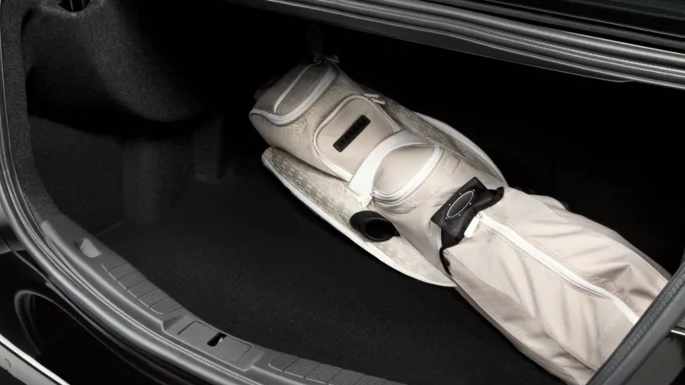 The Fusion’s interior is accommodating for almost any passenger, which makes the car flexible, usable, and comfortable for long-haul trips.

Inside, Fusion features two right-sized cupholders up front and two in the rear armrest, each door pocket is wide and able to hold plenty of gear.

The Fusion’s seats are comfortable and are a pleasant place to sit for long periods. The car’s comfort features also bump the friendliness factor. 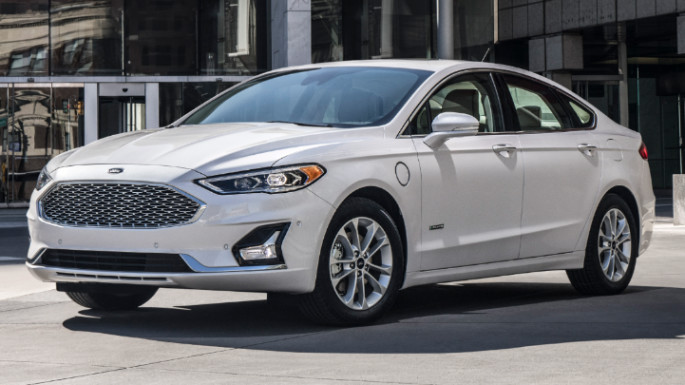 The Fusion’s overall design hasn’t changed much in years, but that’s a good thing. The sedan’s styling is clean, simple, and modern, and remains attractive in the face of more recent rivals from Nissan, Honda, and Toyota.

Controls are grouped and positioned to be accessible to both front passengers. They’re clearly-labeled, intuitive, and feel nice to the touch.

It’s easy for all passengers to enter and exit the Fusion as the door openings are large, and the seats are position relatively high in the cabin to allow easy exits. Parents will enjoy the car’s lightly sloped roof and large rear doors, as they make it easy to load and unload car seats of almost any size.

The Fusion’s cabin feels cohesive and well put-together, though there is an unfortunate mix of lower-rent materials in some trims. Even in the Titanium trim, there are more cheap plastics and hard touch surfaces than we’d like to see for its price point. 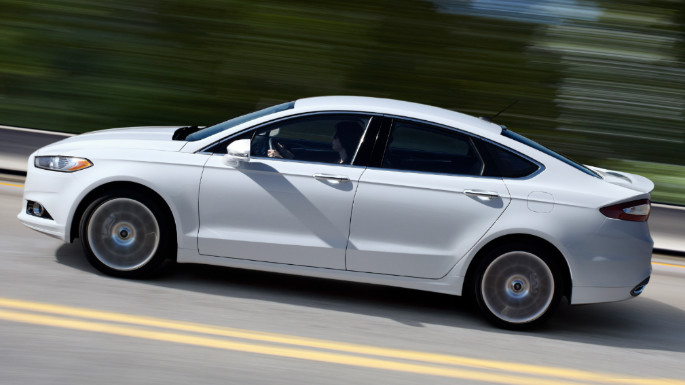 When equipped with either EcoBoost engine, the Fusion feels almost like a sports sedan. Acceleration is healthy, the engines are somewhat torquey, and though they’re not roaring V8s, there is a decent sound that comes under pressure.

Thanks to agile handling and planted cornering, the Fusion can be fun to drive in some configurations. The ride remains comfortable over a wide variety of road conditions, and the car’s suspension does a good job of smoothing out most of the bumps and bangs that come on rough road surfaces. 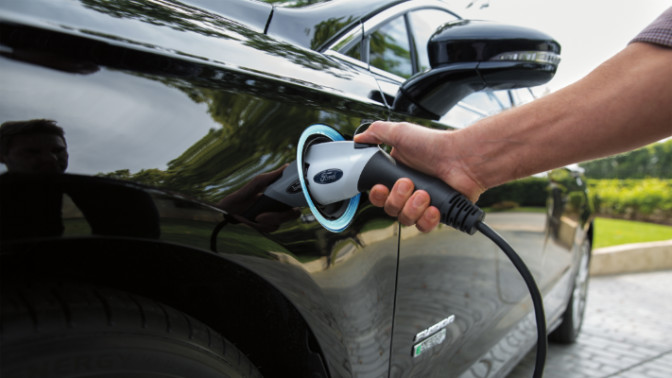 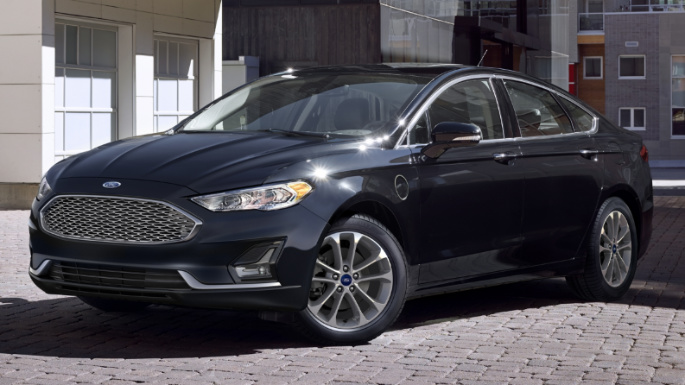 The Fusion Titanium has a starting price of $35,645, and comes with leather upholstery, sport seats, cooled and heated front seats, a premium Sony audio system with 12 speakers and HD Radio, a navigation system, voice controls, a heated steering wheel, and a 2.0-liter EcoBoost engine.

If we were shopping for a Fusion today, we’d give the SEL trim a serious look. The car gets an upgraded audio system, Ford SYNC 3, LED lights, and a variety of other features that make it the value pick among Fusion models, all at a reasonable price.

The Titanium trim is obviously the best, but its price tag may be off-putting for some buyers, especially with options like all-wheel drive.