The 2020 Genesis G90 is a full-size luxury sedan that has been redesigned for the 2020 model year. The exterior of the G90 has been completely redesigned, and many interior elements have also been updated, but the G90 horizontal platform remains the same as the previous model years.

Even though the G90 has only been available to the American public for three years, the Korean automaker and its parent company, Hyundai, are making their best efforts to keep the G90 at the forefront of the struggling large sedan segment with a fresh new look and feel; it's a look that Genesis will soon be introducing across its entire model range.

The goal of the Genesis brand is to offer a luxury experience at a reasonable price. The Mercedes Benz S-Class, BMW 7 Series, Lexus LS, Audi A8, Lincoln Continental, and the G90's mechanical cousin, the Kia K900 are its primary competitors, as well as high-end versions of the slightly smaller BMW 5 Series and Mercedes-Benz E-Class.

The outgoing G90 has impressed reviewers and consumers since its debut in 2016 as a 2017 model. Those who have seen and driven the new 2020 model have been even more impressed with the upgrades Genesis has made.

Despite waning consumer interest in the large sedan segment and a seemingly insatiable public appetite for SUVs, Genesis has set the bar high with what they offer, and as a result, has made some of the traditional segment players a little nervous about the G90's incredible value.

Even though BMW, Mercedes-Benz, Audi, and similar automakers mostly rely on brand recognition and loyalty, Genesis is perfectly poised to sway some of those loyalists with their newly redesigned flagship sedan.

TLDR: The newly redesigned exterior is decidedly luxurious but can also be polarizing, especially the front end. 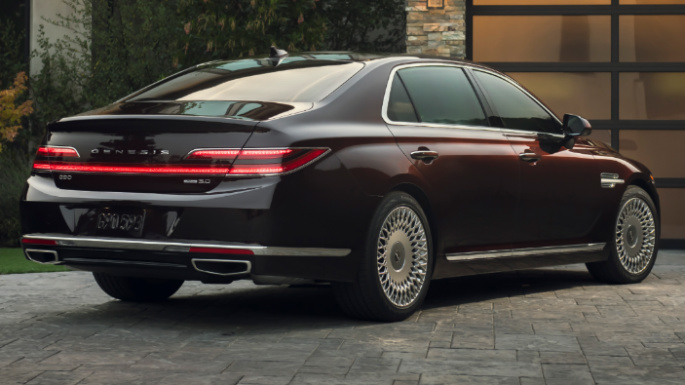 Most critics think that the outgoing version of the G90 is rather bland and ordinary.

While the new 2020 G90 turns all of that around, many believe that it's modern looks are a love-it or hate-it proposition, though most agree that its new design is decidedly luxurious.

The most prominent new styling feature comes in the form of Genesis' G-Matrix crest front grille. Though not as large and loud as Lexus' styling, it does make up most of the front fascia. The G90's headlights take a page out of Volvo's current styling with an LED light strip that splits the headlamps in half and extends to the fenders.

The rear of the G90 is equally interesting with split taillights. The top light strip is relatively standard, extending from the side of the vehicle to the trunk. The bottom light piece undercuts and surrounds the top light strip from below and extends the width of the car, again giving the rear a prominent luxury feel.

The side profile is relatively typical for a full-size sedan. There is no coupe-like tapering in the rear, and large C-pillar fills out the rear part of the canopy nicely. The most prominent side-profile feature is the wheels. They are reminiscent of the tightly-spoked Buick, Cadillac, and BMW wheels of the early 1990s with a large center section.

All of these styling updates give the G90 a thoroughly modern look and feel with a touch of old-school luxury, allowing the car to stand out more prominently amongst its competition than it has in the past.

TLDR: Interior quality and comfort take another step forward from previous years and surge toward the top of the class. 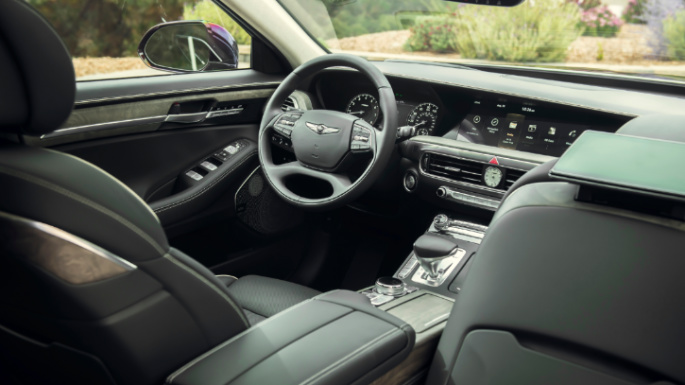 Interior quality and comfort are top-notch. They are especially impressed with the additional interior comfort upgrades from the already-comfortable 2019 model.

Most notably, the level of sound deadening Genesis took to make the ride as quiet as possible is impressive. The ride is serene and library-quiet in nearly any driving situation, giving everyone inside the car the impression that they're lucky enough to be riding in a car that's of extremely high quality.

The G90's adaptive control suspension is an upgrade over the current G90 and does a better job of smoothing out bumps for an even more controlled and luxurious ride.

Passenger comfort is also a highlight. The already large sedan is comfortable and spacious for just about any passenger because of the Napa leather seats that are highly adjustable in the front and rear. In addition, the interior dimensions have been improved and now outclass many competitors in the headroom and legroom.

Both the driver and passenger seats have memory functionality and are highly adjustable. The rear seats are also power-adjustable; an option package adds heating, ventilation and the ability to recline.

Interior quality is another highlight. The styling has been cleaned up from the outgoing G90, and interior quality is nearly on par with the best in class, an especially impressive feat considering the G90's reasonable price tag. The wood grain finish adds a nice touch that many note would not be out of place in any comparable BMW or Mercedes.

TLDR: Its large dimensions provide excellent interior space, but cargo capacity is smaller than many competitors. 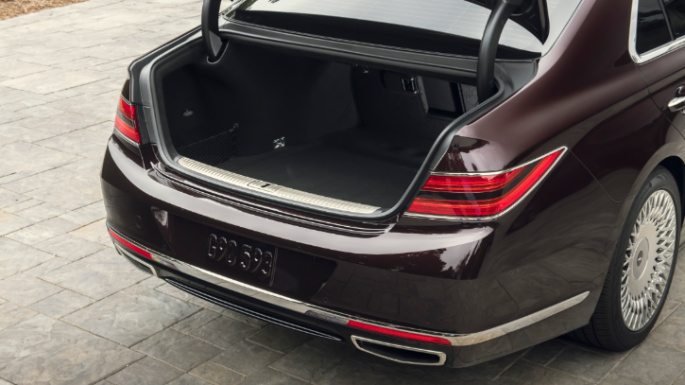 Utility and practicality are both good, but neither comes as a surprise for a large sedan. While cargo capacity is slightly lower than other competitors, being a large sedan, four adults can be still be comfortably transported with few worries about going on long, uncomfortable road trips.

The G90 is designed to be a comfortable cruiser. As such, access to the front and rear seats is more than adequate, and the lack of a coupe-like roofline allows all potential occupants to slide into the back seats without the fear of bumping their heads on the roof, according to reviewers.

Cabin ergonomics have been improved over the previous G90 with fewer buttons and knobs cluttering the center console. Additionally, the infotainment system is responsive and easy to use; many comparable systems are not as quick to respond or as intuitive.

The G90 layers in additional capabilities by offering all-wheel-drive as an option on both the V6 and the V8 models.

TLDR: The G90 offers a good amount of standard features with a responsive, simple, and better-than-average infotainment system. 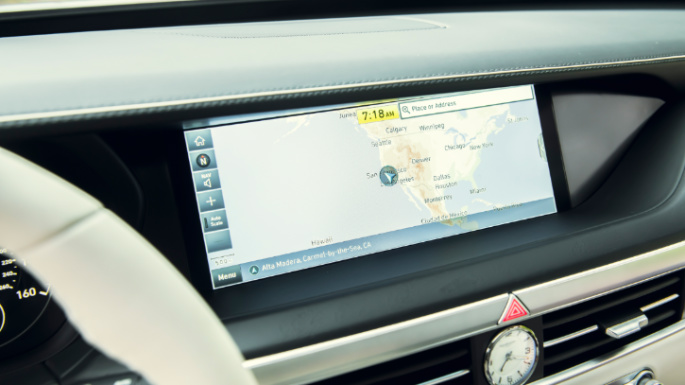 Technology and infotainment features have been upgraded for the 2020 model year and do not leave much to be desired compared to others in the segment.

The infotainment system is better than many other competitors' systems. A 12.3-inch touchscreen infotainment display is standard and can be split to show multiple menus at a time. This system is also expected to be the first Genesis system to feature "over-the-air" updates.

One noted drawback to the system is that it lacks some of the most in-depth features and customization options of some other competitors.

Apple CarPlay and Android Auto come standard with the system as well as a 17-speaker Lexicon sound system, Bluetooth, and wireless device charging.

TLDR: More standard safety and driver assistant aids make the 2020 G90 one of the potentially safest vehicles in the segment. 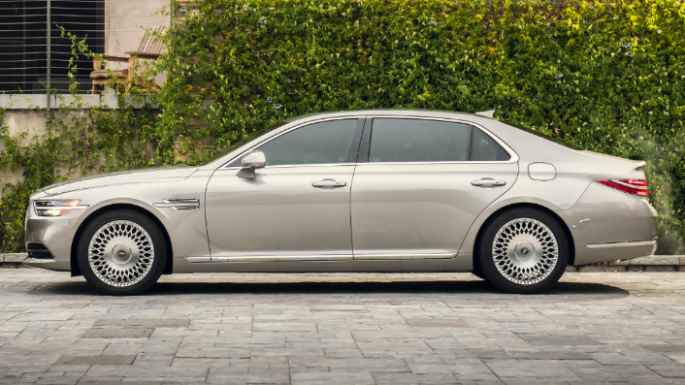 The 2020 Genesis G90 is loaded with safety features.

The adaptive cruise control system is commendable as is the lane-keep assist system.

The NHTSA has yet to crash test the G90; IIHS has tested one and gave the G90 its highest rating -- a Top Safety Pick Plus designation.

TLDR: The G90 offers a quiet, luxurious, and comfortable driving experience without as much performance as other competitors. 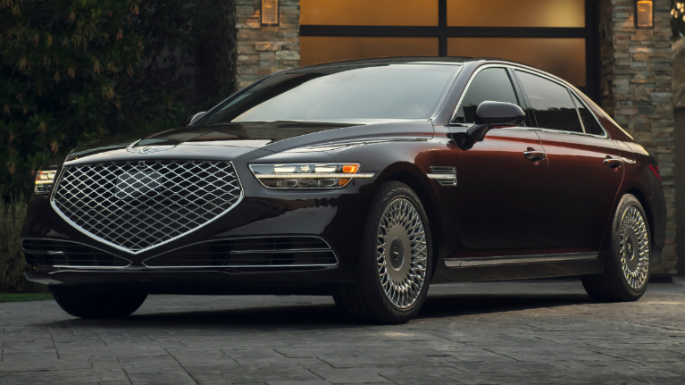 The Genesis G90 delivers the driving experience that potential buyers of a car like this expect. Nearly everyone who has driven the G90 agrees that the overall experience is excellent for what the car is.

Both drivetrains come standard with an eight-speed automatic transmission and the option of rear-wheel-drive or all-wheel drive.

In addition to the overall competance of the V6, the ride quality was also excellent. Even the cornering ability of the relatively heavy G90 is better than expected. Much of this is thanks to the adaptive suspension system. Though not tuned for spirited driving, the suspension provides enough stiffness for a confident drive while also easily dismissing bumps and ruts.

The G90's eight-speed transmission was also a highlight. The shifts were almost undetectable, with minimal lag in both city and highway driving. 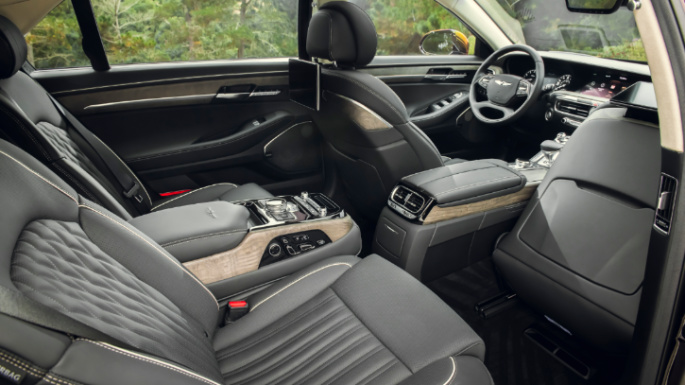 G90s equipped with the 3.3-liter twin-turbo return EPA estimates of 17 and 25 mpg in city and highway driving respectively, regardless of whether the car is fitted with rear-wheel-drive or all-wheel drive.

G90s equipped with the 5.0-liter V8 and rear-wheel-drive return EPA estimates of 16 and 24 mpg in city and highway driving, respectively. Adding all-wheel-drive drops both of those numbers by 1 mpg, resulting in a combined 18 mpg.

Competitors like the BMW 7 Series and Mercedes Benz S-Class return slightly better fuel economy numbers in their models equipped with both their V6 and V8 engine options. It should be noted that vehicles like the Lexus LS and Lincoln Continental do not offer V8 engine options.

TLDR: The G90 comes with just two choices to make: AWD or RWD and V6 or V8. The rest is standard. 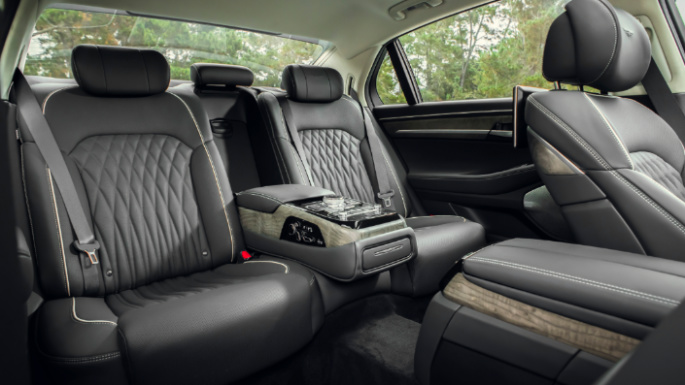 The 2020 Genesis G90 comes with just a pair of choices for buyers to make: V6 or V8 and all-wheel-drove or rear-wheel-drive.

TLDR: The 2020 G90 is set to remain one of the most value-oriented vehicles in the class.

The Genesis G90 carries on the tradition set by the 2017-2019 G90 and continues to offer a great value to potential buyers but with some extra goodies for the 2020 model year.

Despite a small increase in price due to a more comprehensive slate of standard features, the G90 combines comfort, features, and a relatively low starting price, putting it at the forefront of those who are seeking a genuinely value-focused full-sized sedan.

Safety, passenger space, ride comfort, and even interior materials have risen to levels rivaling that of BMW, Mercedes Benz, and Audi, at a much lower price point.

The 2020 Genesis G90 is taking the next step toward being a legitimate player in the large luxury sedan segment. Even though it has already established itself as such, brand perception is the most significant hurdle the G90 has to overcome. This new iteration could be the model that finally makes that happen.