Once a staple of the American suburbs, the station wagon has long been falling out of favor among new car buyers as plush minivans and SUVs have swayed families looking for practical haulers of people and cargo. Instead, it's been reformatted as a more practical alternative to a luxury sedan, or a more exclusive alternative to the ever-popular crossover SUV.

While the vehicles on this start from about $27,000, they quickly rise in price -- only one is from a non-premium brand. Porsche makes a wagon, but it's not the one available with a six-speed manual transmission. And at more than $113,000 to start for the most expensive model here, wagons are pretty much restricted to luxury status in the US now.

But then they offer the same luxuries as the sedans they're based on, as well as a sleeker profile than a corresponding SUV model. Most come with standard all-wheel-drive (AWD). Many have increased ground clearance or adjustable suspensions, and even some plug-in hybrids. And because of their exclusivity, the impression of rarified air they give is unlike that of most posh new sedans or SUVs on sale today. 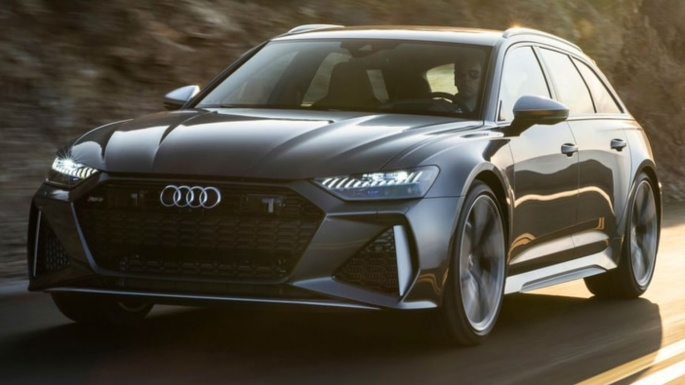 The Audi RS 6 has long been the German luxury brand's midsize high-performance sedan, marrying sports car-like performance with the practicality of five seats. It's also typically been matched to a wagon body style and kept away from the US. But for 2021, Audi decided to send the latest-generation RS 6 Avant over to battle German sedans such as the BMW M5, Mercedes-AMG E63 S, and Porsche Panamera Turbo. Unlike those models, the Audi is only available as a wagon. That means it's a 591-horsepower, all-wheel-drive vehicle that can accelerate from 0-60 mph in as little as 3.5 seconds that happens to have five doors and a folding rear seat. 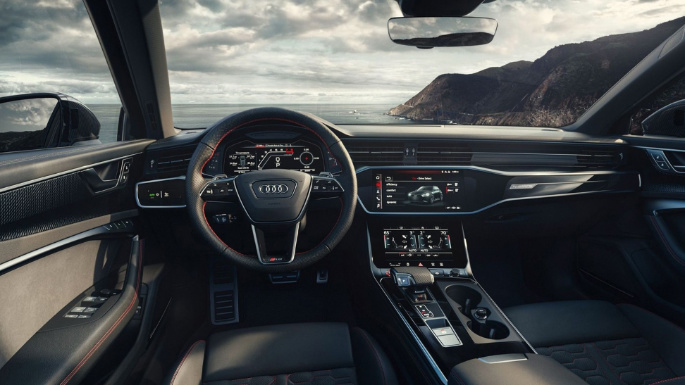 The RS 6 Avant not only shares mechanicals like its bi-turbocharged, 4.0-liter V8 engine with the Audi RS 7 Sportback but the Audi RS Q8 and Lamborghini Urus SUVs. And those SUVs somehow manage to hold no more inside than the RS 6 Avant's 59 cubic feet of maximum cargo capacity. And with available carbon-ceramic brakes and leather-covered, 12-way power-adjustable sport front seats, track days could be combined with home improvement runs in many kinds of weather, thanks to Audi's Quattro all-wheel-drive system. That is if a $110,000 wagon is the ideal utility vehicle. 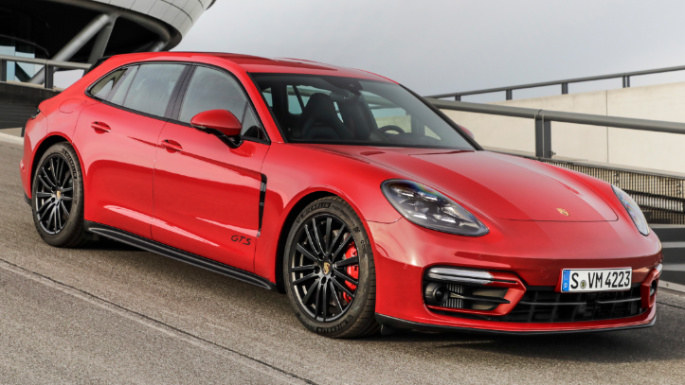 There have been few newcomers into the wagon category in recent years, but none more unlikely than Porsche with the Panamera Sport Turismo. Lined up with the Panamera four-door fastback, the Sport Turismo adds a little more utility to that car's mission as a sports car for four adults. There's little difference in the Sport Turismo, though, meaning its Porsche pedigree for performance is intact. Some upgrades for 2021 models also included a power boost that sends the top model up to a dizzying 690 horsepower, which happens to be a plug-in hybrid. The standard Panamera doesn't want for many luxuries inside, which is also the case with the Sport Turismo. 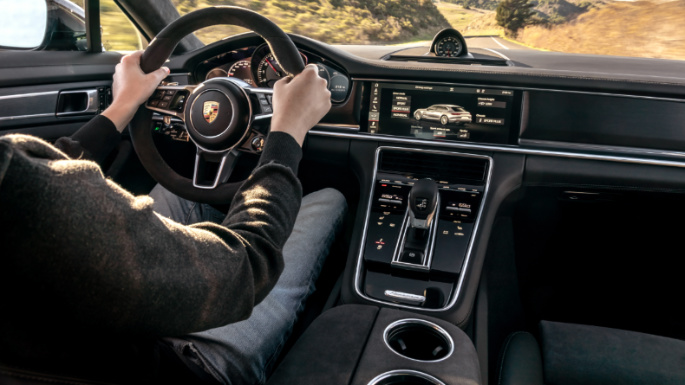 The Panamera Sport Turismo is also offered in a bewildering seven-strong lineup. All models feature all-wheel-drive as standard equipment, but there is the turbo V6 Panamera 4 model, a more powerful 4S variant, even more-powerful Turbo and GTS variants, and the plug-in hybrid 4S E-Hybrid and Turbo S E-Hybrid versions. Of note: The Panamera Sport Turismo costs $99,350 MSRP -- to start. In traditional Porsche fashion, options add up quickly. The top-trim Turbo S E-Hybrid starts at nearly $100,000 more, at $193,000, and quickly gets into $200,000 territory. But it's arguably more of a conversation starter than a 911 Turbo will ever be. 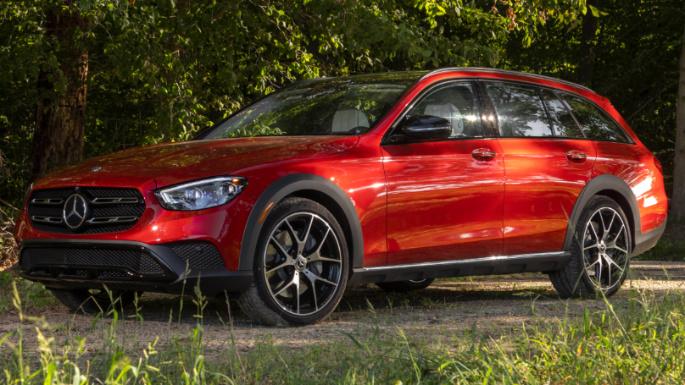 Mercedes-Benz has a relatively long history of turning its faithful E-Class sedan into a capacious wagon. For 2021, it's replaced the standard E 450 wagon in the US with the new E 450 All-Terrain. Borrowing a recipe from Audi, Subaru, and Volvo, the All-Terrain uses a new turbocharged, 3.0-liter six-cylinder engine with 362 horsepower and standard 4Matic all-wheel-drive. It also adds an air suspension along with 1.2 inches of ground clearance over a roadgoing E-Class sedan. 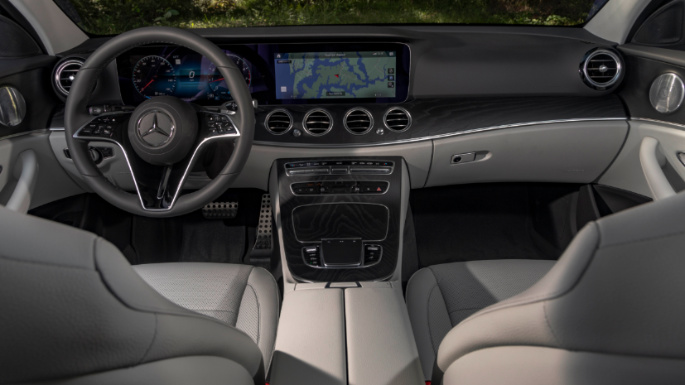 The All-Terrain is also the only seven-seater on this list. Two of those seats come in the form of a small, rear-facing bench that folds up in the cargo area. It's not nearly as spacious as the one in a '70s Oldsmobile Vista Cruiser, and even kids are likely to complain about the legroom. Yet, the All-Terrain has a vast and high-quality interior for five people. Its standard MBUX infotainment system brings it in line with other recent Mercedes-Benz models.

From about $69,000 to start, it's for a reasonably well-heeled adventurer. But considering the E 450 All-Terrain is as capable as the Mercedes-Benz GLE 450 SUV, it makes sense for the luxury buyer wanting something different than another crossover. 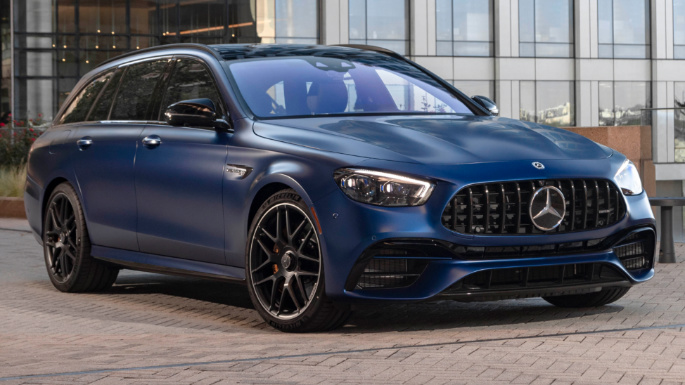 Mercedes offers a direct rival to the Audi RS6 Avant and Porsche Panamera Sport Turismo in the form of the AMG-tuned E63 S Wagon. With 603 horsepower from a twin-turbocharged, 4.0-liter V8 engine and standard all-wheel-drive, the E63 S takes the same formula that works wonders in the sedan and applies it to the only slightly heavier wagon body style. 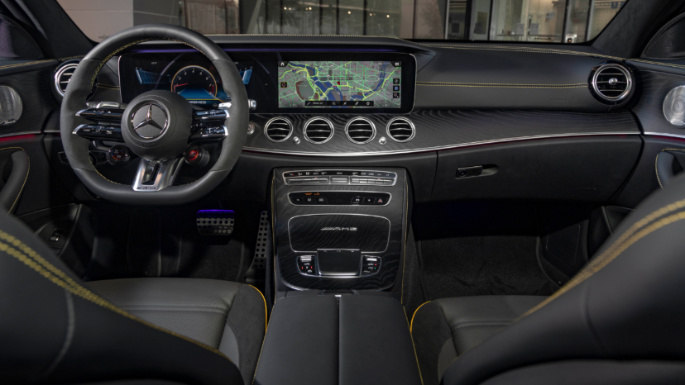 Without the All-Terrain's boosted ride height, the E63 S Wagon drives similarly to the sedan, boasting the same level of luxury inside. It's far more spacious than the Audi RS 6 Avant and Porsche Panamera Sport Turismo, putting it on par with a performance SUV, only far closer to the pavement. But like its rivals, the E63 S Wagon doesn't come cheap with an MSRP of $113,500 -- to start. 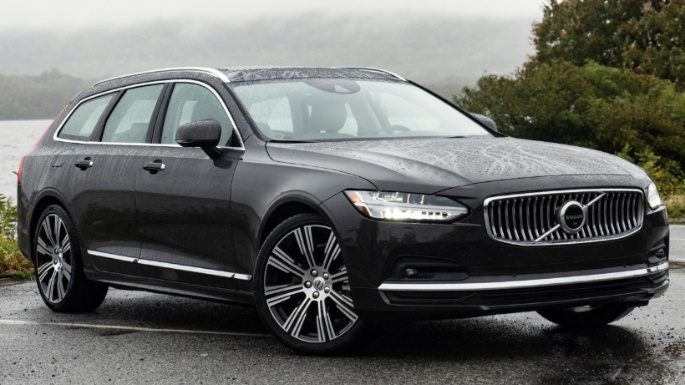 No list of the best wagons on sale today would be complete without strong representation from Volvo. The Swedish brand has been a byword for the vehicle type, but the iconic boxy profile has since given way to the sleek Volvo V90. Borrowing from the successful XC90, the V90 forgoes some of the three-row SUV's mass and spaciousness for an elegant shape. That's not to say the V90 isn't practical. It has a massive interior with split-folding rear seats, novel touches like a grocery bag holder, and a generous amount of cargo space. And it boasts high-quality interior materials and cool modern design more than befitting of its roughly $53,000 starting price. 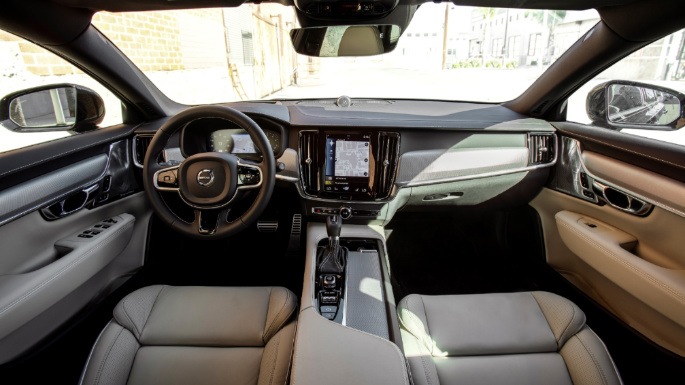 The V90 received some modest revisions for 2021, with a new grille and wheel designs on the outside, new upholstery options inside, and some new technology such as a wireless smartphone charger. Power comes from either a turbocharged, 250-horsepower four-cylinder engine with front-wheel-drive or a turbocharged and supercharged four-cylinder engine with 316 horsepower and all-wheel-drive. All models are equipped with Volvo's Pilot Assist advanced driver assistance technology and offer built-in child booster seats in the rear row.

It's also worth noting the V90 is a special-order vehicle at US Volvo dealerships. That means there aren't many on dealers' lots, but it's a relatively straightforward vehicle to tailor to individual tastes. And it's scarce on American roads. 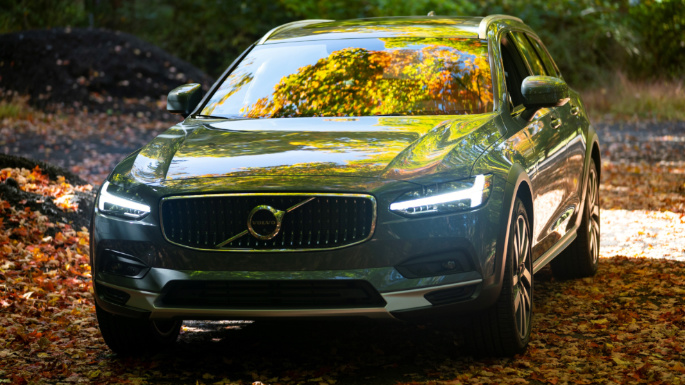 Volvo popularized the offroad-style wagon in the late '90s, and the V90 Cross Country is the latest in the line. Available only with the V90's more powerful 316-horsepower engine and all-wheel-drive, the V90 Cross Country sports a slightly higher ride height with added ground clearance, along with some blink-and-miss design touches such as revised lower trim and a hill descent control.

For 2021, it also gained some styling revisions that mimic the V90's. Pricing starts from about $58,000, which is slightly easier to stomach than rivals like Audi and Mercedes-Benz. 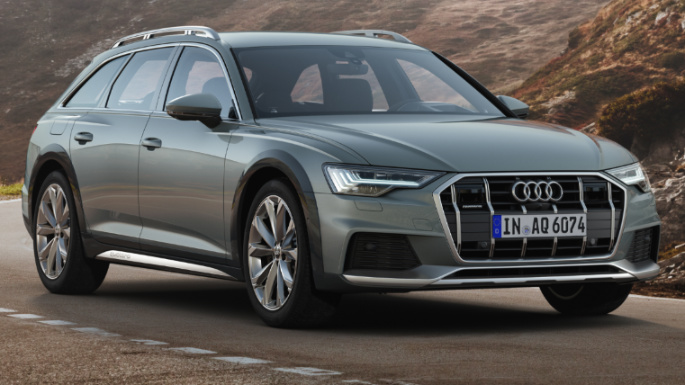 Audi first took its renowned Quattro name for all-wheel-drive and applied it to an A6 wagon in 2000, before the brand made any SUVs. Reintroduced in 2020, the A6 Allroad returns to the US market after Audi has bolstered its reputation with its stylish and capable Q5 and Q7 SUVs. The Allroad marries the A6 sedan's 335-horsepower, turbocharged 3.0-liter V6 engine and standard all-wheel-drive with a more practical wagon body style. The adjustable air suspension can add more than an inch of ground clearance to the stock ride height. While it won't climb rocks like a Land Rover, the A6 Allroad is more than useful on various unpaved roads and, crucially, more kinds of weather than a sedan. 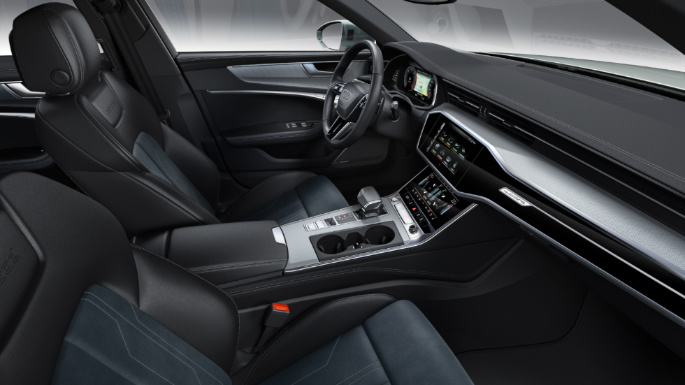 The RS 6 wagon shares the A6's stylish interior. Audi's latest MMI infotainment system and spacious seating for five, with a roomy cargo area for luggage. A direct rival to the Mercedes-Benz E 450 All-Terrain and Volvo V90 Cross Country, the A6 Allroad starts in the predictably pricey territory of around $67,000. 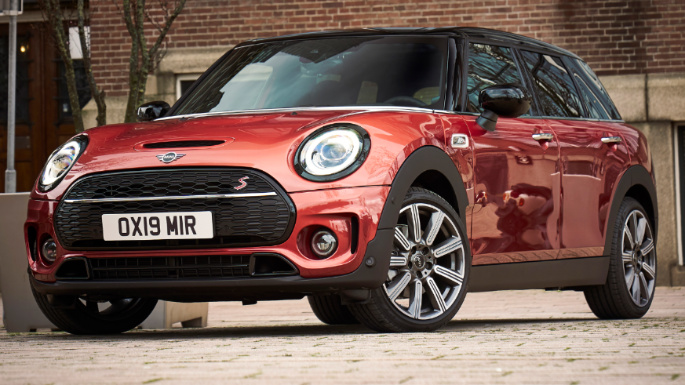 Starting from $30,750 MSRP, the 2021 Mini Clubman is one of the least expensive wagons for sale in the US. It's also the smallest, but also very distinctive in even this unusual segment. While the Clubman is more than a foot longer than the five-door Mini Cooper hatch, it's still no larger than most compact hatchbacks. But the Clubman makes the most of its diminutive size with an upright interior that's surprisingly comfortable for four passengers and a large, square cargo area behind the trademark barn-style doors. For 2021, all Clubmans get a turbocharged, 2.0-liter four-cylinder engine. 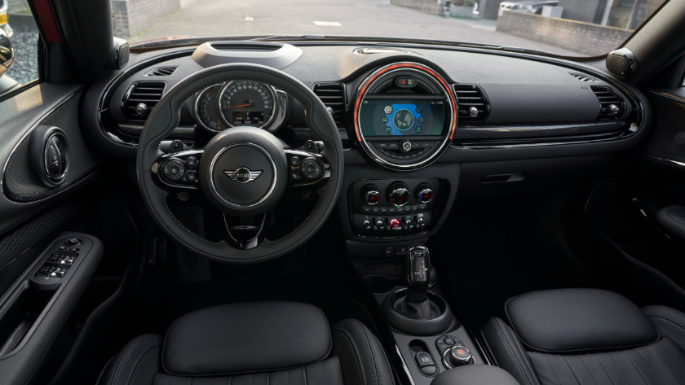 The base, front-wheel-drive model comes standard with a six-speed manual transmission, a rarity for a new car at any price. A performance-oriented John Cooper Works edition also comes with 301 horsepower, all-wheel-drive, and an eight-speed automatic. Being part of the BMW Group is an asset here. Behind the Clubman's quirky styling and heritage design touches, it's nearly as refined as a BMW 2 Series Gran Coupe, for example, but far less expensive, more practical, and more offbeat choice. 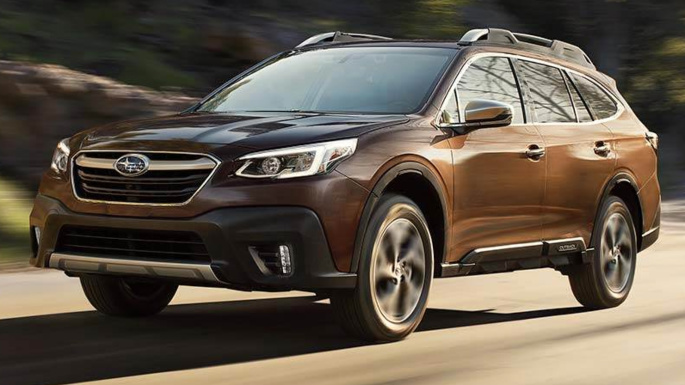 The Subaru Outback is one of Subaru's best-selling vehicles, racking up more than 153,000 sales in the US. A benchmark among wagons for more than two decades, the Outback has built on Subaru's long-standing reputation for durable and vehicles with the added capability and versatility of standard all-wheel-drive. The Outback's popularity might also have come from a substantial revision for 2020, which only refined the successful formula. 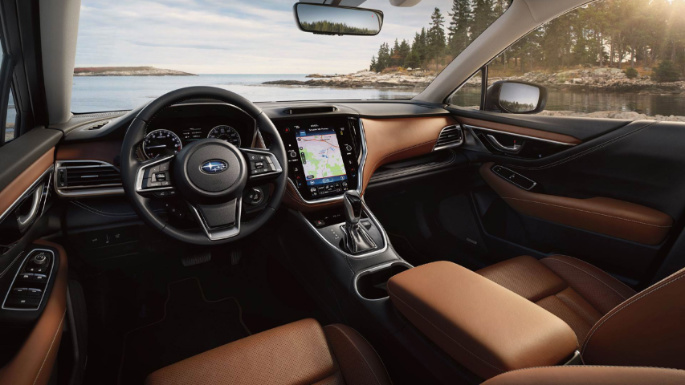 However, it also added a turbocharged four-cylinder engine on XT models, which offers 260 horsepower compared to the standard car's 175. It's not a performance wagon, but the Subaru can more than hold its own against SUV competition, much of which is more expensive and far worse fuel economy. And at $27,845 MSRP for a base model, the 2021 Outback is the least-expensive new wagon on sale today. It's no wonder it's a consistent favorite among buyers. 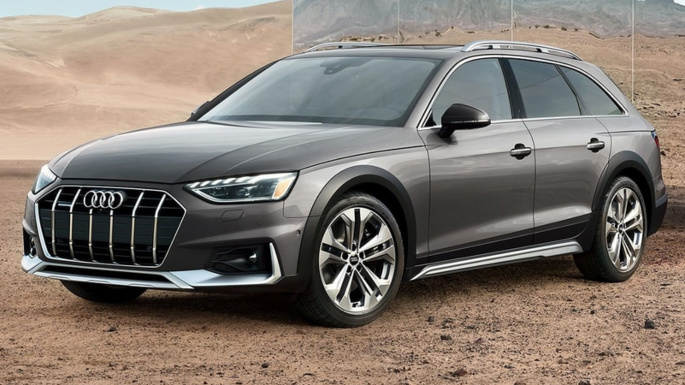 Audi stopped offering a standard A4 wagon in the US years ago, opting for this A4 Allroad variant instead with a revised grille and a more rugged exterior styling than the standard A4 sedan. For 2021, the A4 line received some revised styling inside and out, along with a more powerful, 261-horsepower turbocharged 2.0-liter four-cylinder engine. 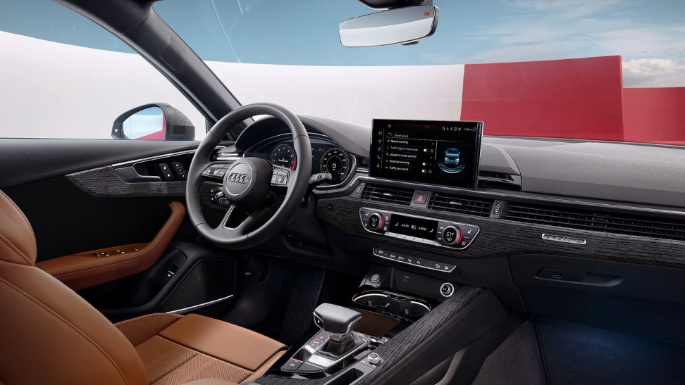 Mated to a seven-speed automatic transmission and Quattro all-wheel-drive, the A4 Allroad lacks the A6 Allroad's adjustable suspension. However, it can still put down power where it needs to be on unpaved surfaces. From $45,645, it's considerably more expensive than the larger Subaru Outback. But the A4 Allroad is still a practical vehicle for small families and a worthy alternative to any SUV, boasting a particular posh value on its own. 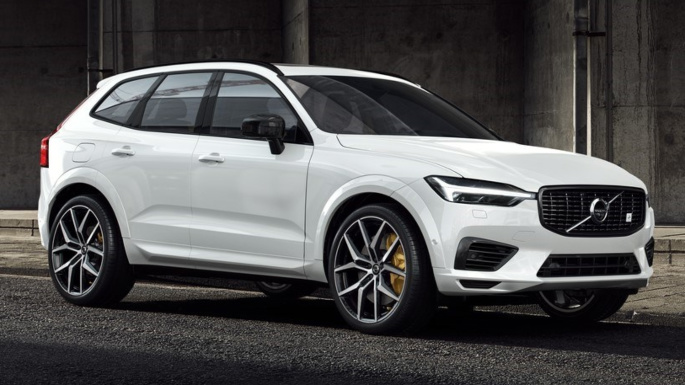 Volvo offers the most wagon models in the US right now, but the V60 is the least expensive, at $42,000 MSRP to start. That price is on par with many premium sedans, and it comes with advanced driver assistance features in a more compact package than most SUVs. It also shares a stylish interior with immensely comfortable seats and available features such as integrated rear-seat child booster seats and the Pilot Assist advanced driver assistance feature. 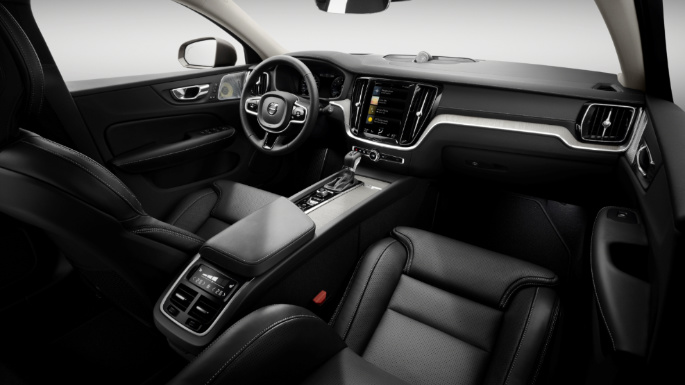 In the US, the V60 T5 is available only with front-wheel-drive, unlike the S60 sedan with which it shares most components. The V60 T8 Polestar Engineered, however, is Volvo's answer to performance wagon demands. With 415 horsepower and electric motors for the front and rear wheels, it may not have the plug-in Panamera Sport Turismo models worried. Still, it gives little to compact performance sedans while also throwing in some added practicality and an EPA-estimated 22 miles of electric-only range. 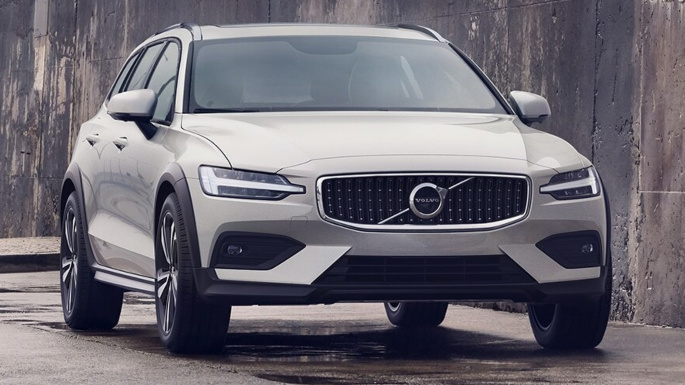 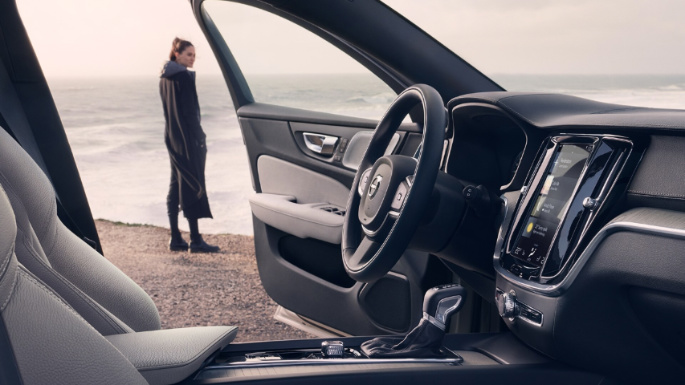 Considering it also has the same number of seats as the equally-accomplished Volvo XC60, though, the $47,000 V60 Cross Country makes the case that an SUV isn't the only capable vehicle for navigating winter weather conditions.