Loyalty reigns among full-size pickup truck buyers. For years, customers return to the brands they've stood by and defend why theirs is better than others. It's part of the culture.

Each has benefits over the other, but what sways buyers towards diesel engines in heavy-duty pickups is better low-end torque, pulling power for towing trailers, and (slightly) better fuel economy. Longevity, however, is king.

The best choice depends on what the consumer wants it to do. Here's a breakdown of all the differences between these three pickup truck diesel brands.

The significant reason large, heavy-duty trucks exist is to tow things. To tow, you need a lot of torque. Diesel engines are capable of producing a lot more torque than gasoline engines. These are the heavy-duty truck engines and how they stack up.

The 2022 Ford F-Series Super Duty continues with the 6.75-liter V8 diesel with variable geometry turbocharger is expected to continue with the 475-horsepower and 1,050 lb.-ft. of torque that it was elevated to for 2020. But the engine has been essentially unchanged since 2015 when new injectors and a turbocharger were added. 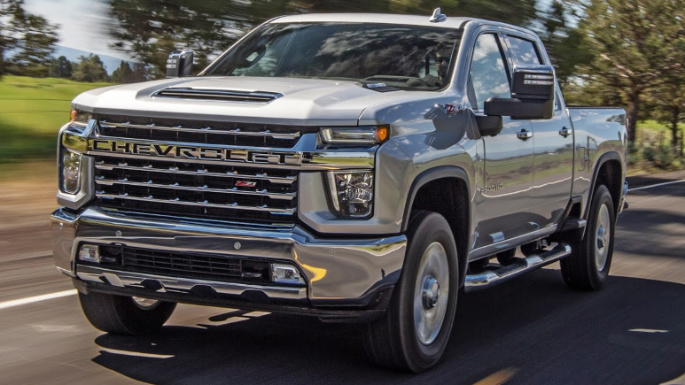 Meanwhile, the 2022 Chevy Silverado HD (seen above) and similar GMC Sierra HD Duramax diesel engine, with a cast-iron engine block and aluminum head, is a 6.6-liter turbodiesel V8 with 445 horsepower and 910 lb-ft of torque. It's also equipped with an Allison automatic transmission, which is another renowned brand among trucks and another draw to the engine.

All of the domestic brands are relatively close in terms of torque. Other factors, including how much they weigh and how much optional equipment they have to carry all of the time, affect performance to some degree.

Torque and horsepower are significant factors in how much a truck can tow. But two other factors play a part. The first is the structural design of the truck itself, and the other is the engine's strength. However, towing over 26,000 pounds requires a commercial driver's license in all US states. 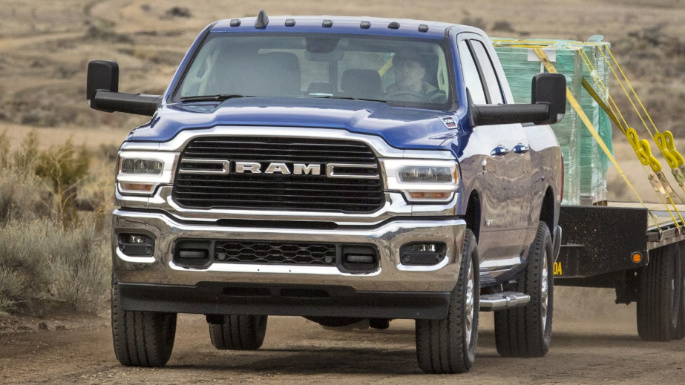 Both the Ram's Cummins (seen above) and Ford's Power Stroke can pull over that amount, but the Duramax lags with a total towing capacity of 23,300. The Power Stroke wins here again with a total towing amount of 34,000 pounds versus Ram's 31,210 pounds. However, if you're looking at these numbers and do not hold a commercial license, any of these trucks will likely fit the average truck owner's requirements.

Ultimately, heavy-duty diesel trucks are meant to do work, not garner excellent fuel economy. As a result, the Environmental Protection Agency (EPA) is not required to test these vehicles because they exceed the weight maximum to be considered against automakers' fuel economy averages. But given that diesels are generally more efficient than gasoline engines, these engines should allow a greater driving range.

Don't consider emissions to be good, however, but since the EPA doesn't rate this, it's uncertainty. And also consider that newer trucks aren't straightforward conversions for biodiesel. More modern high-pressure common-rail diesels are more complex than previous engines and contaminants can build up in the fuel system. It can also affect the cylinder heads. All of this can lead to big bills, so consult a mechanic (and the warranty) first.

Probably even more important than engine specs is a guarantee of reliability. Long warranties don't necessarily mean that the engine is guaranteed to work that long, but rather that any issues will be addressed if they happen during that period. Not only that, but the manufacturer likely has a reasonable assumption that the engine will last that long. If they didn't, they wouldn't make a warranty where they'd lose money as issues continued to crop up.

Still, all three engines are covered under typical automaker powertrain warranties, so there's little to differentiate among the models.

And while automakers don't break out model mixes based on gasoline and diesel engines, Ford has long retained its leadership among full-size pickup popularity, and it's likely the Power Stroke engines are more plentiful than the other names. The Silverado and Ram have become increasingly close in sales, with the Ram occasionally surpassing them. But combine the GM trucks — the Silverado and Sierra — and you're more likely to see a GMC or Chevy Duramax than a Ram Cummins.

Other 2022 Diesel Trucks to Consider

Some people might not need all of the capability of a diesel-powered heavy-duty pickup truck. However, many smaller pickups offer diesel engines and respectable hauling capabilities, with better fuel economy and lower prices.

Regardless, diesel engines operate differently than gasoline engines, and it's worth a test drive to determine if the driving dynamics will fit the need for towing and hauling.

Which has the heritage? Cummins vs. Duramax vs. Power Stroke

Cummins got its start in 1919 and started supplying diesel engines to then-Chrysler Corporation's (then) Dodge Ram pickup trucks in 1988. Truck drivers know it from the company's engines' widespread use in medium and heavy-duty trucks, buses, and other large vehicles. The company also lent its name to a 5.0-liter V8 turbodiesel in the Nissan Titan XD from 2016 through 2019, but it was unpopular, and few are available used.

In contrast, the GM Duramax line has only been around since 2001, established as a partnership between GM and Isuzu to replace a long-running Detroit Diesel engine. But the automaker has used it as a blanket term for all of its light-truck diesel engines. It's always been a V8 engine, though, that is the actual Duramax engine and goes in the Chevrolet Silverado and GMC Sierra HD trucks, as well as some of GM's vans.

Other current vehicles that wear the Duramax name are the 2.8-liter four-cylinder turbodiesel in the Chevy Colorado and GMC Canyon midsize pickups and the 3.0-liter six-cylinder in the Silverado and Sierra 1500 trucks, as well as the Chevy Tahoe and Suburban, GMC Yukon and Yukon XL, and Cadillac Escalade full-size SUVs.

The Ford Power Stroke name has been in use since 1994 in partnership with former Navistar. It's also been a blanket term for several V6 and V8 diesel engines. Currently, it covers the 6.75-liter turbodiesel V8 in Ford's Super Duty line of heavy-duty pickups and the 3.2-liter five-cylinder in the Transit van range.