What is a Hemi Engine?

A HEMI engine is an engine with hemispherical combustion, first trademarked in the 1960s by Chrysler and seen today in dragstrip-worthy rides like the Dodge Challenger SRT Demon, a modern muscle car. HEMI is also a trademark, denoting a series of inline six-cylinder and V8 Chrysler HEMI engines. A HEMI engine usually (but not always) has cylinders with a domed head (rather than the traditional flat head) and a hemispherical combustion chamber. This setup can provide more engine power than a conventional engine thanks to a higher compression ratio that augments the combustion process. Big. Power. That’s HEMI in a nutshell.

If you’re a knowledgeable gearhead, your mind may automatically pivot to images of a big block 426ci if the term “HEMI” is spoken in your presence, and you’re not alone there. But the truth is that the HEMI has a long history that predates that big block by many decades, paving the way for engines like the small block V8 supercharger 6.2-liter in the Dodge Demon’s sibling, the Dodge Charger SRT Hellcat. This engine is just one of Chrysler’s many derivatives based on the classic HEMI “A”—the one that started it all.

And while Dodge and HEMI go together like peanut butter and jelly, Dodge is not the only automaker to use the HEMI or a HEMI-esque engine in its vehicles. Not by a long shot, although Dodge arguably did/does it best. From Ford to Fiat (and FCA), many others have taken a stab.

A HEMI has a super-efficient combustion chamber, making it markedly more powerful than other engines. Unlike a flat-head piston on the engine you might find in your lawnmower, HEMI pistons usually have a dome-shaped head with open, angled valves and twin spark plugs per cylinder. This configuration allows for

HEMI engines generally burn all of the gas in the cylinder, which taps all of the potential energy. Higher compression results in higher heat, more combustion and more energy that is completely extracted owing to the HEMI's angled crankshaft. For the same reason, little of the generated energy gets lost when absorbing air and fuel into the combustion chamber and subsequently pushing out exhaust.

Since heat helps to create pressure in the cylinder walls, heat preservation is vital. The HEMI design conserves heat through its unique shape and the size of its surface area relative to the size of its combustion chamber. Recall from high school biology that surface area, such as your skin, is one of the ways heat dissipates.

The HEMI hemispherical head surface area is quite small compared to a traditional flat-head engine. HEMI loses less heat, allowing for higher pressure, higher heat, and more fuel combustion. The HEMI design places angled valves on either side. In the HEMI design, spark plugs are positioned on top of the combustion chamber. Previous designs placed valves in a single-file line, which limited each valve's potential size. With valves on either side, there is more room for valves to be larger. HEMI valves are much larger than inline valves. Thanks to this larger size, HEMI valves excel at the conduction of airflow through the engine.

The concept for the HEMI engine dates back to 1901. Most cars had just four cylinders with domed cylinder HEMI heads, albeit a basic design. Flash forward to 1948 and the post-world war development of the six-cylinder engine, thanks to Harry Westlake and his team. The engine, developed for Jaguar, was the first of its kind to actually employ the basic technology for the HEMI that would spawn decades of innovation to come.

But it wasn’t until 1950 when Chrysler began to implement the design in its Imperial, New Yorker and Saratoga models—all based on a design that had been used years before in an experimental V-16 fighter plane engine. This early effort bolstered Chrysler’s efforts to bring more power to its engine designs, allowing it to create the very first V-8 HEMI—an engine that delivered 180 horses and featured a displacement of 331 cubic inches—a groundbreaking amount of power for the time. By contrast, Chrysler’s competitors, including Oldsmobile 88 and Buick Roadmaster produced dramatically less displacement and a minimum of 40 horsepower less.

Chrysler continued on its path of HEMI domination, producing engines with a displacement of 354 by 1956 and in 1957, 392 cubic inches. And by 1964, Chrysler’s second-generation HEMI (426-cubic-inch) swept the Daytona 500, capturing first, second and third place wins. Its elephant engine, a 425-horsepower street HEMI was offered just a year later.

Interestingly, HEMI had its share of detractors in the racing world because vehicles equipped with the engine came out on top in record numbers. Vehicles with HEMI engines won 26 of 62 races in the 1964 stock car truck series. Chrysler and Dodge swept more than half the races in 1964 in general, which NASCAR execs didn’t like (citing fan boredom and the lack of “ready availability” of the engine for the average buyer). This led to the HEMI’s ban from NASCAR. As car buffs may recall, it was the removal of the HEMI from NASCAR that provided the impetus four years later for the Dodge Daytona’s creation.

The HEMI took a mysterious vacay from production for more than 30 years before Chrysler released its modern, third-generation version of the HEMI in 2003. This 5.7l HEMI V8 engine had 345 cubic inches of displacement—you may recognize it today if you’re a fan of Ram’s lineup of trucks. A new variation of the HEMI was launched in the mid-2000s: the 6.1-liter engine. It was widely used in Dodge’s Challenger, Charger and Magnum models, the Jeep Cherokee, and the Chrysler 300C.

A 2015 6.2-liter version of the HEMI was developed for use in the Dodge Charger SRT and Dodge Challenger SRT Hellcat models as well as the SRT Trackhawk from Jeep Cherokee. These variants are supercharged to deliver amazing high performance that has become synonymous with the Dodge brand. 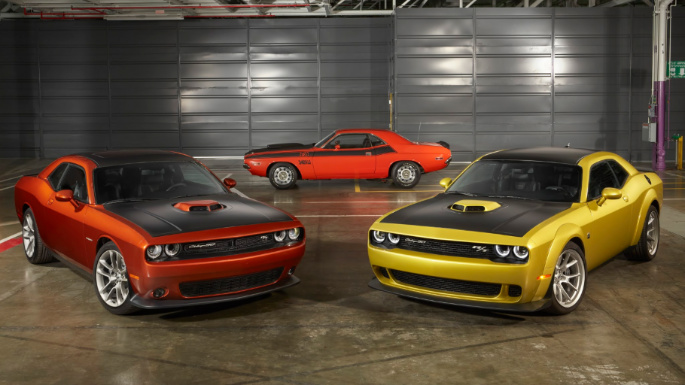 As of 2021, there are three generations of Chrysler HEMI.

Chrysler introduced the First Generation of HEMI engines in 1950. Called FirePower, the engine was a standard feature on the 1951 Chrysler New Yorker and the 1951 Imperial and it was an option for the Saratoga. FirePower came in three different displacements (engine sizes): 331 cubic inches, 354 cubic inches, and 392 cubic inches.

Chrysler introduced the Dodge HEMI in 1953 as the Red Ram. It was smaller than the Chrysler HEMI and intended for smaller cars, with engine sizes making up to 193 horsepower. Between 1955 and 1958, low-line DeSotos contained the Red Ram as did various Dodges and high-line 1955 to 1956 Plymouths. Red Rams had displacements of 241 cubic inches, 270 cubic inches, 315 cubic inches and 325 cubic inches.

The first generation HEMI, especially the 392, proved popular among drag racers. This remained the standard and preferred drag racing engine until the 1970s. The Chrysler 300C of 1957 and the 300D of 1958 both contain the 392 HEMI.

Second-generation HEMI engines were introduced in 1964 with the 350-horsepower 426, nicknamed the Elephant Engine. The 426 coincided with the 1960s era of Chrysler engine innovation. Chrysler produced this engine specifically for NASCAR, and the 426 HEMI's NASCAR debut occurred under the hood of a 1964 Plymouth Belvedere optimized for racing.

Although the 426 didn't return to NASCAR for 1965, it was standard on a handful of special production cars that included the Plymouth Fury, the Dodge Dart, and the Dodge Coronet. The Elephant Engine boasted high power, extreme weight, and dimensions. The 426 displaced 426 cubic inches, or 7 liters. Chrysler only produced 11,000.

The 1971 Plymouth Barracuda ('Cuda for short) contains a 426 HEMI. Versions of Second Generation 426 HEMI engines designed for consumer automobiles also appear in the 1970 Plymouth Superbird, the 1970 Monteverdi Hai 450, and the 1971 Dodge Challenger.

The current third generation is the one trademarked as HEMI, boasting up to 395 horsepower. This generation commenced in 2003 with the 5.7-liter HEMI in the Dodge RAM 1500, 2500, and 3500 pickups. As of 2021, Dodge Durango and Dodge Challenger still claim HEMI engines under their hoods. More than a million units of this engine have rolled off Chrysler’s assembly line since its inception.

One thing’s for sure when it comes to the HEMI. It’s here to stay. It has phenomenal appeal for fans of fast, powerful cars and provided the concept for the engines that are now used in AHRA and NHRA drag racing. That’s some pretty big shoes to fill.

And as if didn’t have enough fans in the SRT8, funny car, and pony car crowds, Ram lovers are likewise captivated by the HEMI. Its use in Ram trucks has helped to cement its reputation among not just muscle car lovers but a wider base that appreciates the performance of the HEMI for work and for play. Some might even go so far as to say that the HEMI/Ram combination helped the Ram 1500 eclipse the Chevy Silverado in a number of full-size truck units sold last year. Its strength and durability for Ram prove to be selling points that truck buyers are looking for, and it doesn’t hurt that the 5.7-liter V8 with 395 horsepower and up to 510 lb-ft of torque also tows up to 12,750 pounds. That’s a whole lot of power, and the bulk of truck buyers want power aplenty.

If you’re looking to modify or restore a 1960s or 70s vehicle with a more modern V8 crate engine, you’re in luck no matter which of the newer generation emissions-compliant HEMI engines you choose for your project. Many leading aftermarket companies (we’re looking at you, Mopar), offer the components that you need to make the new engine swap go off without a hitch, from exhaust manifolds to fuel injection components, exhaust valves, cylinder heads, and shaft-mount rocker arms. In fact, there are some tuning products out there with plug-and-play interfaces that make the modern HEMI swap totally doable.

Now that you’re fully immersed in all things HEMI, you may be ready to join the crowd that believes that buying a car with a HEMI engine is a worthwhile pursuit. Some of the reasons that auto enthusiasts get the feels for HEMI engines are purely technical: HEMIs have bigger valves and offer higher thermal efficiency and higher power output. Others like that the HEMI is found under the hood of the world’s most powerful cars. And most folks are impressed by its sheer toughness. In fact, the HEMI passed a Chrysler “torture test” in the early 2000s—running at full throttle without oil for hours. That’s one amazingly tough engine.

HEMI is an ongoing concept that continues to evolve. The HEMI name is now synonymous with Chrysler, a maker that repeatedly upgrades the design for efficiency. Newer HEMI engines are 5.7-liters in size and feature diverse camshaft profiles. HEMI is an engine that is complicated in its simplicity and the many mechanical ways in which it diverges from other engine designs. The ultimate result is that a HEMI setup can produce plenty of power much more effectively, making it a favorite in muscle cars, racing cars, high-powered pickups, and cars for drivers who value power and efficiency under the hood.