Powertrain: All trims have a 280-horsepower, 3.5-liter V6 with a 10-speed automatic transmission and front-wheel drive. 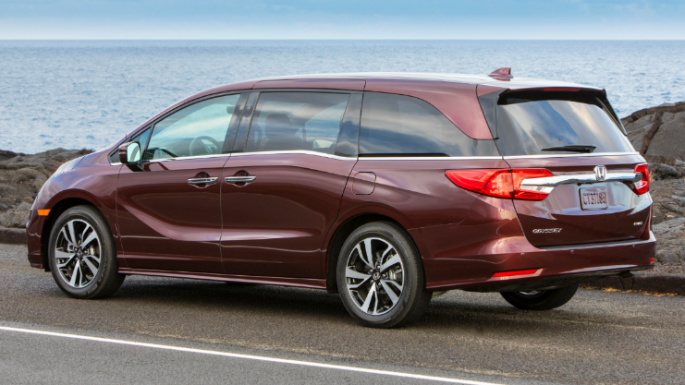 The Honda Odyssey is a minivan that competes with the Chrysler Pacifica, Chrysler Voyager, Dodge Grand Caravan, Kia Sedona, and Toyota Sienna.

For 2020, all versions of the Odyssey get a 10-speed automatic, replacing the nine-speed automatic that came on some versions. Fuel economy is unchanged. A slightly revised model arrives for 2021.

Like its main rivals, the Odyssey seats up to eight passengers over three rows of seats and has dual sliding rear doors. Honda’s minivan has long been a benchmark for design and functionality, and the current model continues the tradition with a number of novel features.

While there are fewer minivan rivals than a couple of decades ago, the Odyssey competes with models that are closely matched in terms of space, performance, and flexibility. That leaves buyers to choose between smaller design differences when picking a vehicle to haul as many as eight passengers.

It also makes a case against the numerous three-row SUVs on the market as a more spacious way to carry a lot of people or offering a flexible interior for hauling.

One caveat on the Odyssey is that it doesn’t offer a hybrid option or all-wheel-drive. The new 2021 Toyota Sienna will be hybrid-only and will offer AWD as an option; the updated Chrysler Pacifica also offers AWD and a hybrid powertrain as options (but they can’t be combined). 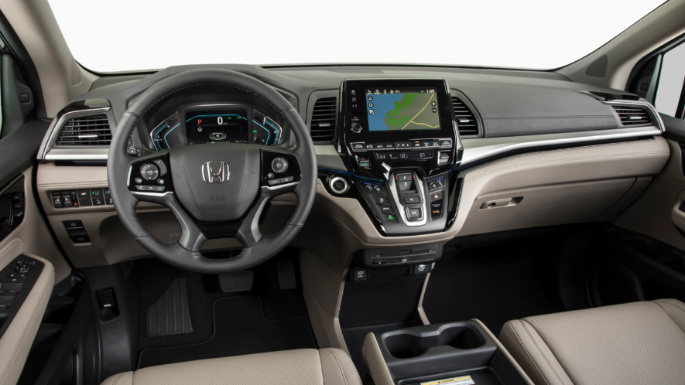 All but the base LX model come with the Honda Sensing suite of driver assistance features, which include adaptive cruise control, automatic emergency braking, forward collision warning, lane-keep assist, and blind-spot monitoring with rear cross-traffic alert.

Every Odyssey gets a backup camera with dynamic guidelines, but a 360-degree camera isn’t offered, and it lacks front and rear parking sensors unless the dealer installs them. Toyota makes driver assistance features standard on every Sienna, while Chrysler offers them as an option even on the least-expensive Voyager model, while the Pacifica models can be equipped with a surround-view camera. 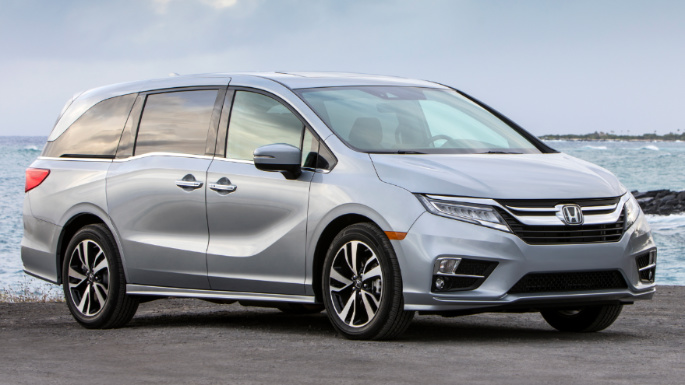 The base LX model starts several thousand dollars higher than the Chrysler Voyager, Dodge Grand Caravan, and Kia Sedona. At least it comes with almost all of the essentials, such as alloy wheels, power front seats, and rear privacy glass.

The EX gets the driver assistance technology package, as well as seating for up to eight passengers.

Only the mid-grade EX-L model offers options, which restricts features such as leather upholstery and a power liftgate to models that cost nearly $40,000 – or more.

Built-in navigation and a rear entertainment system also require an EX-L or higher trim. That’s not the case on most rivals.

Honda traditionally doesn’t offer many incentives on the Odyssey. That leaves bargain hunters to shop Dodge and Kia dealers for steep discounts on those vans. And while a Chrysler Pacifica can sticker for thousands more than an Odyssey with options, incentives could make that vehicle fall more in line with the Honda’s price. 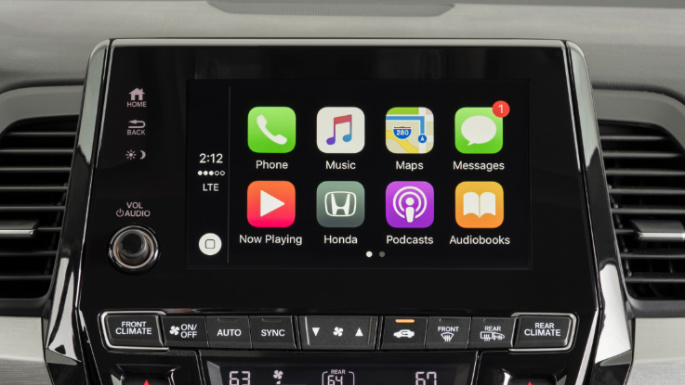 All but the base LX get an eight-inch touchscreen infotainment system with Apple CarPlay and Android Auto compatibility. But only EX-L and higher can be equipped with built-in navigation and a rear entertainment system. The latter consists of a 10.2-inch roof-mounted screen, Blu-Ray player, and a pair of wireless headphones. Touring and Elite models also get a wi-fi hotspot. But most models get the minivan essentials, such as power sliding doors and a power tailgate.

The Odyssey is also available with its own spin on novel minivan features. The available CabinTalk system is effectively a PA device that lets the driver speak through the vehicle’s speakers to passengers in the third row, rather than shouting in an old-fashioned manner. CabinWatch projects a video of what’s happening in the back of the van to the front passengers, effectively ending kids from hitting each other before anyone has to pull the van over.

Unfortunately, the Odyssey’s infotainment system is far more cumbersome to use than equivalent systems on Chrysler and Kia minivans. The menus are confusing, and it isn’t as responsive as other systems on the market. While there are some physical controls for volume and the climate control system, many functions have to be operated through the touchscreen, which can get tiresome and distracting while driving. The system in Honda’s own Accord sedan is more advanced than what’s offered in the Odyssey. 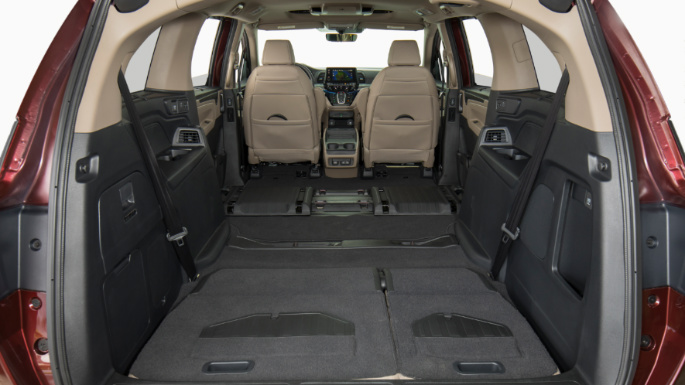 The Odyssey has a reasonably flexible and spacious interior among its rivals. Its maximum cargo capacity falls short of the Toyota Sienna, but exceeds that of the Chrysler, Dodge, and Kia vans. It’s also wide enough for three passengers in the second and third-row seats, with enough legroom in the rear-most area for adults. The seats themselves are more comfortable than those found on Chrysler and Dodge competitors, while there’s a deep well for cargo behind the third row.

All models but the base LX seat up to eight passengers. When not in use, the middle “Magic Slide” second-row seat can be removed and the second row turned into captain’s chairs or moved together to provide easier access to the third-row seat. This is a better solution than some rivals have with sliding and folding seats to get people into the rear-most seats.

However, the Odyssey doesn’t offer lounge-like captain’s chairs for the second row like the Sedona and Sienna. Those second-row seats are also heavy to remove and don’t fold into the floor as they do on the Chrysler and Dodge minivans – but at least they can be removed unlike those in the Kia. Touring and Elite models are also equipped with the HondaVAC, a built-in vacuum cleaner that can reach pretty much every corner of the Odyssey’s interior.

The 2020 Odyssey is rated to tow a maximum of 3,500 pounds when properly equipped, which is on par with all other new minivans, and likely enough for a small trailer. However, other three-row SUVs, including the Honda Pilot, can be rated to tow slightly more. But the Odyssey does a better job than three-row SUVs in terms of providing passenger space and cargo space, with a lower loading height and that deep cargo area when the third row is up. 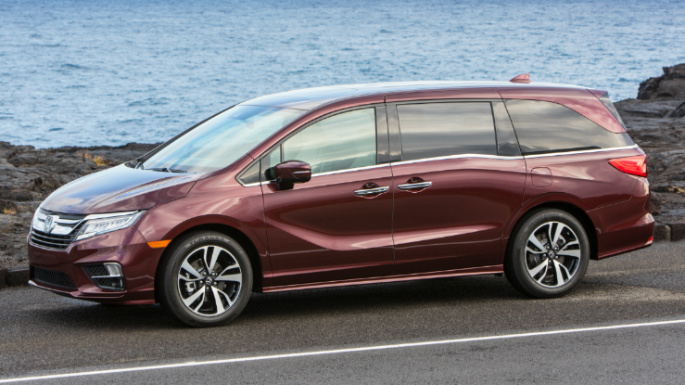 Last redesigned for 2018, the Odyssey hasn’t strayed far from the format that’s made it extremely popular among minivans for the last 20 years. Honda’s take on the minivan isn’t as adventurous as the Kia Sedona and its blunt, SUV-like styling. Nor is it as curvaceous as the Chrysler Voyager and Pacifica.

Instead, the Odyssey’s look is inoffensive and sticks closely to Honda’s current look across its line. Besides, minivans are about function over form anyway. The Odyssey’s size makes it difficult to maneuver in tight spaces, however, and Honda doesn’t offer a 360-degree camera like some rivals.

The interior is generally well-designed, but some drivers might be intimidated by how many buttons and switches are on the center console. While this makes them easy to reach, some controls are small and hard to find by feel. The push-button gear selector will also trip up those used to a conventional lever, although it’s likely no more confusing than the rotary dial on the Chrysler minivans.

Quality is generally good, but plastics are more serviceable than plush. Again, the Pacifica does a better job of providing a premium interior experience, especially on higher-end versions. 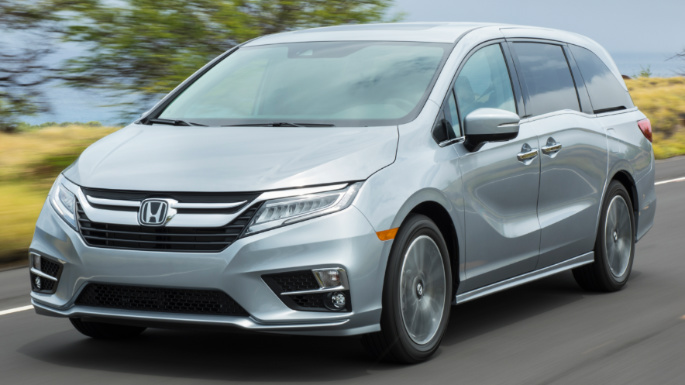 The 3.5-liter V6 and 10-speed automatic work to provide responsive acceleration. Most find the Odyssey more responsive than the Kia Sedona, and while not as powerful as the Toyota Sienna, the Honda has a more refined driving experience.

It’s also quieter than the Dodge Grand Caravan, although the Chrysler Pacifica and Voyager hold an edge for quietness.

Slow steering and a soft ride make highway cruising effortless, but it contributes to making the Odyssey feel its size in tighter spaces. While no minivan is particularly athletic to drive, the Honda can be cumbersome in urban settings. Without a surround-view camera or parking sensors, it can also be difficult to park because it’s hard to tell where the extremities of the vehicle are.

The Odyssey is only offered in front-wheel-drive format. Until recently, it’s been unusual for minivans to offer all-wheel-drive, but new versions of the Toyota Sienna and the Chrysler Pacifica offer this option, as do all three-row SUVs that seat seven or eight passengers. It may not be a deal-breaker, but it means the Odyssey can’t compete with these models for drivers who live in harsh weather conditions for much of the year. 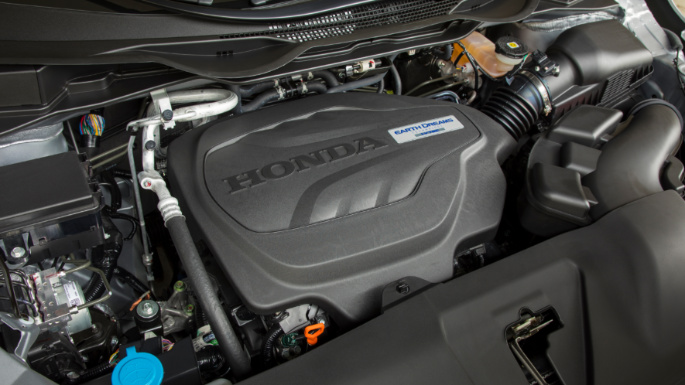 The EPA rates the 2020 Odyssey at 19 mpg city, 28 mpg highway, and 22 mpg combined. That’s tied with the Chrysler Pacifica and Chrysler Voyager models for best-in-class fuel efficiency. It’s also better than most three-row SUVs with similar numbers of seats, making the Odyssey relatively fuel-efficient, given the amount of space it offers.

What the Odyssey doesn’t have is a hybrid version. The Chrysler Pacifica Hybrid is a plug-in hybrid that’s rated at 30 mpg combined by the EPA, and also boasts a range of 32 miles on electricity only.

Buyers looking for the most efficient people mover on the market should be swayed by the Pacifica Hybrid’s fuel economy numbers and eligibility for federal and state tax incentives.

Toyota will introduce a Sienna Hybrid in 2021, too, further eroding the Odyssey’s fuel economy standing. 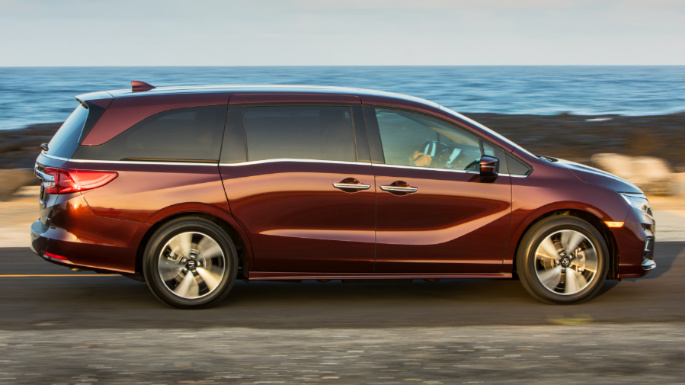 Avoid the LX because it lacks driver assistance features, has an inferior infotainment system without smartphone connectivity, and only seats up to seven.

While the EX is generously equipped, only EX-L and higher trims are available with features such as a power tailgate, which rivals offer on less expensive versions. But at just under $40,000, it’s a relatively good value compared to rivals.

Ignore the bargain-basement Dodge Grand Caravan unless cheap space is a priority, as it’s a dated design. The Chrysler Pacifica and Toyota Sienna are the Odyssey’s stiffest competitors, but both can also get expensive with options.