The Honda Odyssey is a five-door minivan manufactured by Honda and marked the first minivan produced by the Japanese automaker. The Odyssey is often described as a minivan in an SUV body and has been in production since 1994. The first Honda Odyssey featured hinged doors and offered low horsepower. However, in its fifth-generation (since 2018), current models provide a host of convenient features, passenger comfort, and a pleasurable driving experience with added horsepower.

The Honda Odyssey is the pinnacle of the minivan, with seating for up to eight passengers and ample cargo space. Many drivers compare the Odyssey to the Honda Pilot, but the Odyssey offers more convenience with its removable second-row seats. 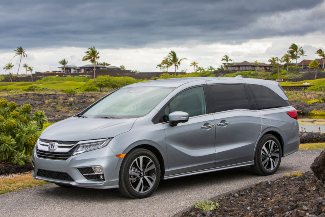 The 2018 model introduced the fifth and current generation of the Honda Odyssey. Updates for this generation include the driver's choice of either a nine-speed or ten-speed automatic transmission. The 10-speed automatic option is available for trim levels above, and including the Touring model.

The engine improved, and the 3.5-liter six-cylinder engine now provides 280-horsepower. All five trim levels from the previous generation carried over into the fifth generation.

2020 (read the review) Models welcomed the 10-speed automatic transmission as standard across all trim levels.

The 2021 (read the review) model year welcomed a facelift with minor restyling, which adds a 4-way power lumbar adjustability to the front passenger seat. The Honda Sensing Package was made standard across all trims with a newly added rear-seat occupant reminder.

For the 2022 model year, the Odyssey only had some minor changes. These included a new color, which was called Radiant Red Metallic II. The built-in integrated vacuum was also discontinued.

Other than that, it came with the same 3.5-liter V6 and the same trim levels that had been available since the beginning of the fifth generation. 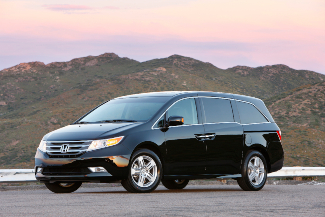 While the fourth generation didn't welcome an all-new car, several changes introduced the 2011 model year as a new generation. The Odyssey received updated exterior styling, including a lower roofline and wider body. While the base engine remained the same with 248-horsepower, higher trim levels received a six-speed automatic transmission.

The LX, EX, EX-L, and Touring trim levels carried over into the fourth generation Odyssey with a new top-of-the-line trim; the Touring Elite. 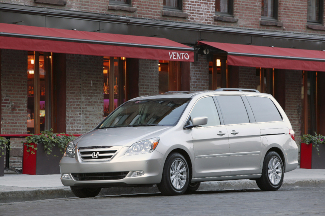 The 2005 model year introduced the third-generation Odyssey. Once again, it was larger than its predecessor after gaining both more width and height. This generation retained the previous generation's interior space and length and the 3.5-liter V6 engine.

Four trim levels were available during this third generation; the LX, EX, EX_L, Touring. Five-speed automatic transmission was standard across all trim levels.

The EX and Touring models received Honda's VCM (variable cylinder management system). This system increased the vehicle's fuel efficiency by allowing the minivan to run on either three, four, or six cylinders. A 2005 Honda Odyssey, which was VCM equipped, received an EPA fuel economy rating of 20 mpg city and 28 mpg highway.

The 2006 model year saw a decrease in horsepower, taking it from 255-horsepower to 244-horsepower.

Honda introduced a mid-cycle refresh for 2008 with the Odyssey receiving a facelift, including daytime running lights, a redesigned dashboard, taillights, and grille. Touring models received full Bluetooth support, and the navigation system became a standard feature. 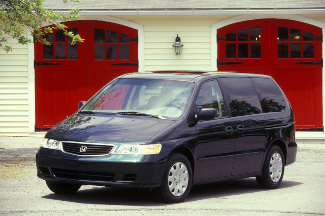 The second-generation Odyssey was larger than the previous generation and adopted the Chrysler minivan style. The Odyssey had sliding rear doors instead of the previously hinged doors and a simpler front strut suspension.

The same trim levels carried over into this generation with offering enough space for seven passengers. Power sliding doors came standard on the EX trim but weren't available on the LX trim.

The Odyssey continued to receive upgrades and offered VHS and DVD-based entertainment systems. The 1999 model year introduced the first-ever navigation system on a minivan; the Honda Satellite-Linked Navigation System. 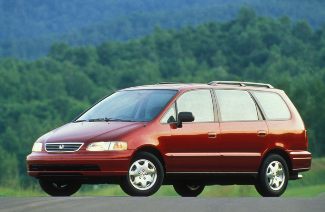 The automaker used the Honda Accord platform to build the Odyssey and included many of the same components. Originally built in Japan, Honda later moved the production of the Odyssey to Canada and then to a North American plant in Lincoln, Alabama.

The original Odyssey minivan featured a powertrain with a 2.2-liter four-cylinder engine paired with a four-speed automatic transmission to produce 140-horsepower.

The first generation Honda Odyssey featured two trim levels, the LX and the EX. The LX seated up to seven passengers with two front bucket seats, a removable three-seat middle bench, and a 2-seat third-row bench. The EX seated up to six passengers and offered additional features, such as the roof rack, alloy wheels, power sunroof, fog lights, and remote keyless entry.

Unlike most traditional minivans at the time, the Odyssey's rear doors opened out on hinges like regular car doors and didn't slide across.

For the 1998 model year, Honda upgraded the Odyssey's engine to a 2.3-liter engine with an output of 150-horsepower.

A rebadged variant of the first generation Odyssey was available; the Isuzu Oasis, which was marketed between 1996 and 1999. By agreement, Honda rebadged the Isuzu Trooper and Isuzu Rodeo as the Acura SLX and Honda Passport.