Vehicle Type: A midsize three-row SUV with seating for up to eight. 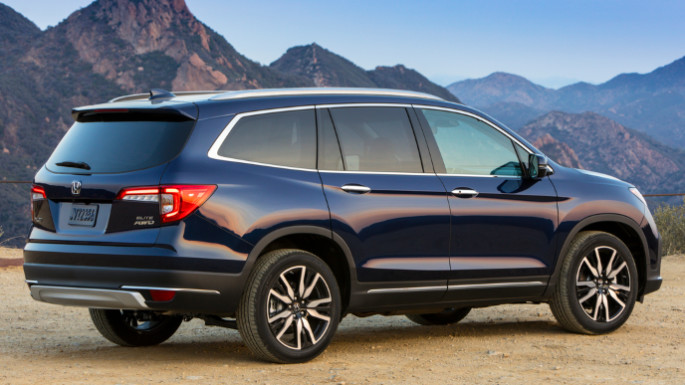 Honda has changed the appearance of its Pilot SUV over time, from an almost boxy, rugged shape to a friendlier minivan profile, which is indicative of its place in the company's lineup. It's the group's family hauler and makes no bones about that purpose with a massive cabin, plenty of family-friendly entertainment and safety tech, and comfortable accommodations.

The Pilot used to be one of just two crossovers that Honda built, but it's now joined by a few more, including the new Passport, which is basically a smaller version of the Pilot. The 2020 Pilot lineup gained a new top Black Edition trim and a slightly higher price tag.

The Honda Pilot is a midsize SUV that competes in a crowded segment that includes the Toyota Highlander, Nissan Pathfinder, Kia Telluride, Hyundai Palisade, and Subaru Ascent. The Pilot is targeted at new car buyers with families that need the space and utility of a minivan but don't want to drive one.

This Honda was last given a full redesign for 2016, and was modestly updated for 2019 with some new design details and equipment changes. The 2020 Pilot lineup is powered by Honda's widely used V6, which is a 3.5-liter unit that produces 280 horsepower and 262 lb-ft of torque. Most trims come with a six-speed automatic gearbox, but the top trims come with a nine-speed automatic with paddle shifters. All-wheel-drive is available that has selectable driving modes for various road conditions.

Though many of the Pilot's best features are reserved for higher trim levels, it is a safe and roomy family SUV. Honda tossed the kitchen sink at the Pilot when it comes to advanced safety features, including forward collision warning, adaptive cruise control, automatic emergency braking, and active lane control for every model. 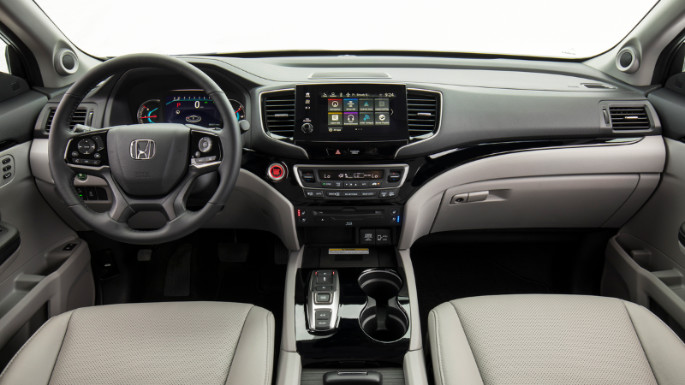 The Insurance Institute for Highway Safety (IIHS) awarded the Honda Pilot with a Good rating in all crash tests. The automatic emergency braking system was good enough for a Superior rating for front crash prevention. Those scores added up to net the 2020 Pilot a Top Safety Pick designation. 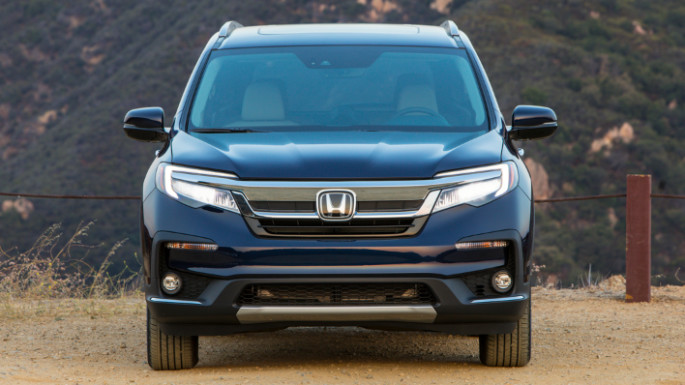 While equipped with a load of advanced safety features, the base Pilot isn't that well equipped when compared to its counterparts at higher trim levels. Stepping up to the top trims moves the price tag dangerously close to $50,000, and crosses that threshold in the new Black Edition trim.

All-wheel-drive isn't standard for the Pilot as it is in the Subaru Ascent. Given the Honda's propensity to become expensive quickly, this could be a reason to shop for a different brand. At least it comes with top-level Elite models. Still, there's no real advantage in terms of economy or the way it drives for Honda not to make all-wheel-drive standard – considering it's a big reason buyers pick the Pilot over their Odyssey minivan.

The base trim comes with the bare minimum of comfort and convenience features, such as air conditioning and power windows/door locks, but it misses out on the entertainment features that the EX and above trims get. It's missing significant features such as Apple CarPlay, Android Auto, SiriusXM radio, and HD Radio.

There is indeed a wide variety of Pilot models to suit a big swath of the car-buying public, but the model line gets too expensive too quickly. Over $50,000 for a Honda SUV is not the best look when competitors like the Kia Telluride can be had fully loaded for around $48,000.

The Pilot returns fuel economy in the low-20 mpg range in almost all trims, regardless of front or all-wheel-drive. There's no available hybrid or plug-in model that could mitigate some of the SUV's mass. The Toyota Highlander, for example, can be ordered with a gas-electric hybrid powertrain that achieves gas mileage in the mid-30 mpg range, even with all-wheel-drive specified. 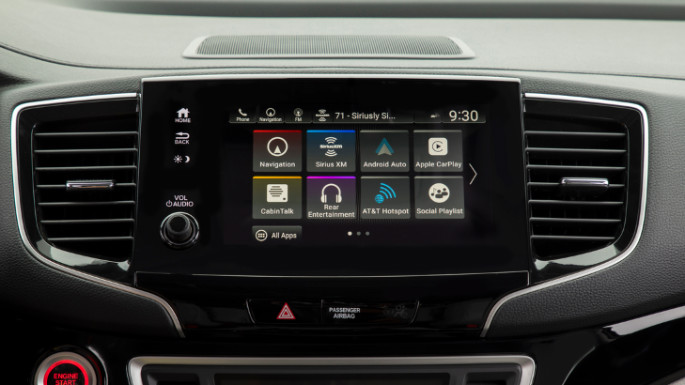 The top four trims come standard with family-friendly goodies to entertain the kids in the back seat. A rear-seat entertainment system plays Blu-Ray discs and can be controlled either with a remote or through the vehicle's touchscreen. Honda's CabinTalk feature allows the driver to speak to rear passengers through a microphone, and the sound travels over any connected headphones.

Honda's infotainment system can be clunky and hard to figure out, but the Apple and Android interfaces overlay the system and make it easier to use overall. That said, menus and other controls are labeled clearly and are relatively easy to use while the vehicle is moving. 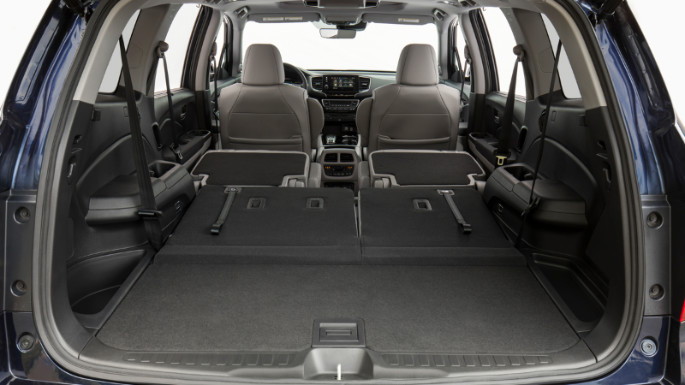 The Pilot was built with families in mind, and it shows in the cabin layout. The interior is spacious and is full of family-friendly storage spaces. There's plenty of small item storage that makes it easy for kids and parents with tiny children to stow all of the accessories that little ones need on the road.

Most models come with a solid second-row bench seat, which allows seating for up to eight people. Higher trim levels exchange that bench for two captain's chairs, which knocks seating capacity down to seven. Though the second-row bench seat can accommodate an extra body, parents will find that the captain's chairs are better at keeping kids' hands away from each other in the second row.

The Pilot's cargo area is more than generous and can carry enough gear to keep all seven or eight passengers happy for the long haul. Pilots with the captain's chairs have a non-removable center console that includes additional small-item storage. The adjustable cargo floor can be moved around to access a storage area under the false floor.

There are large windows, high seats, and small pillars that make the vehicle feel like a greenhouse and considerably open up outward visibility. 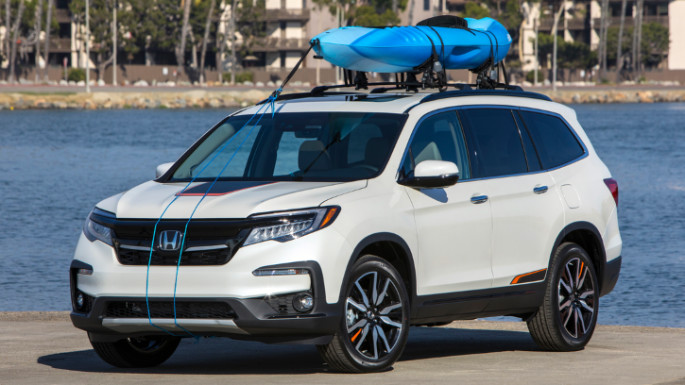 The Pilot was once a boxy, rugged-looking SUV, but it's much closer to a minivan now in shape. That allows it to be much larger overall without looking disproportionate or frumpy.

Higher trims look sporty more aggressive than the lowest trims, but that's at odds with the Pilot's actual performance.

The Honda's cabin is designed to be usable and comfortable for everyone in the family and mostly succeeds. The dash is laid out sensibly and makes it easy to find the button or control needed for the situation.

Entry and exit are a breeze, especially with the second-row captain's chairs, which are easier to fold forward to let people in and out of the third row. The "way back," while a great option to haul additional bodies, should be reserved for kids, as adults will find it cramped and too low to the floor to be comfortable for an extended period.

Honda has built in 16 cupholders and several cubbies to store all of the family goodies needed for road trips. In higher trims, leather and upscale interior finishes make the vehicle feel worth its price tag. 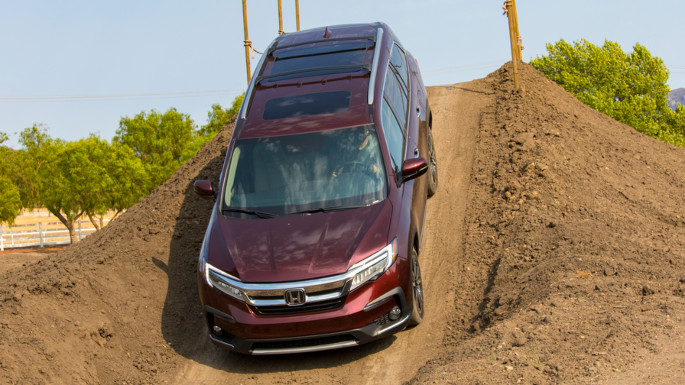 The Pilot is a large vehicle, but it's able to keep that mass mostly in check when the roads get curvy. There should be no expectation of a sporty ride here, as there is still some body roll, and the Pilot's size becomes apparent in evasive driving scenarios.

The 3.5-liter V6 is a good match for a vehicle of the Pilot's size and makes a powerful sound when the gas pedal gets stomped. The nine-speed automatic transmission is more refined than the six-speed and handles highway cruises in a more settled manner, but the six-speed gets the job done with little complaint.

The Pilot has light steering that makes it easy to whip around mall parking lots, but that ease results in a disconnected feeling when the vehicle travels at speed. The ride is mostly smooth, but adding the larger optional wheels makes things considerably rougher, especially over potholes and rough roads. 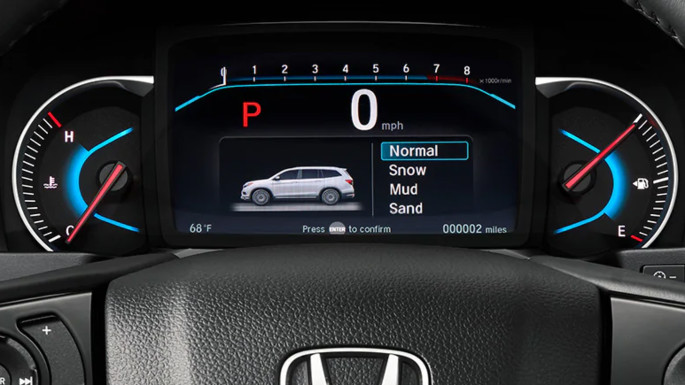 All-wheel drive changes those numbers to 18/26/21 mpg with the six-speed and 19/26/22 with the nine-speed automatic transmission.

Honda doesn't offer a hybrid or plug-in hybrid model to compete with offerings from Toyota. The Highlander is available with a hybrid powertrain that bumps its fuel economy considerably.

Compared to other gas-powered SUVs in its class, the Pilot is comparable. All-wheel-drive models don't match up with rivals like the Subaru Ascent, which beats the Pilot by 3-5 mpg across the board. 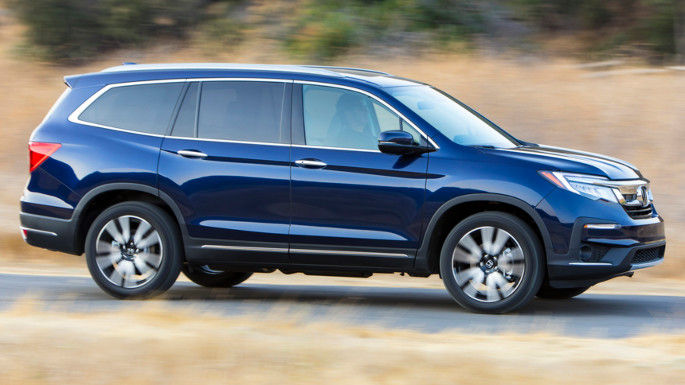 The Honda Pilot EX-L has a starting price of $39,480. It comes with a one-touch power moonroof, a power tailgate, acoustic glass, leather upholstery, a leather-wrapped steering wheel and shift knob, and a power-adjustable passenger seat.

The Honda Pilot Elite has a starting price of $49,935 and comes with a wireless phone charger, panoramic roof, perforated heated and ventilated front seats, and intelligent traction management.