The Honda Pilot is a mid-size crossover SUV that is designed to appeal to those who need a vehicle with ample seating and cargo space as well as good handling and traction. It is Honda's largest size SUV overall and is known to have good overall safety and reliability ratings. The Pilot was first introduced to the U.S. market for the 2003 model year and it is currently in its third generation. Each new version has brought with it changes to technology, trim levels, size, safety and overall style. 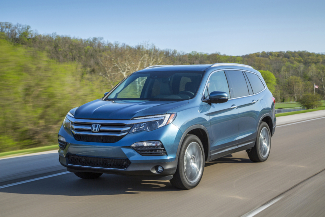 The third-generation Pilot has an overall sleeker design compared to the more square shape of the earlier generation. The exterior includes LED headlights and daytime running lights as well as 20-inch tires on some models. This generation is larger overall than before, yet it weighs 300 pounds less. The direct-injected, 3.5-liter V6 engine has 280 horsepower, an increase of 30 over the previous generation. Its gas mileage is about two miles per gallon better for city, highway, and combined ratings than previous models. Two transmissions are available in the drivetrain: a six-speed automatic on the more basic trims and a nine-speed automatic on the higher-end trims. Buyers can choose from all-wheel-drive or front-wheel-drive.

For the 2016 Honda Pilot, new Elite trim was introduced at the top of the Pilot lineup. It features a variety of premium features including rain-sensing wipers, LED projector headlights, and a panoramic sunroof among others.

Below the Elite are the Touring, EX-L, EX, and LX trim lines.

Several safety upgrades, including a passenger-side mirror camera, blind-spot and rear-cross traffic monitoring, and an optional lane departure warning system are included in several types of trims. A multi-angle backup camera is standard on all models for even more visibility.

Adaptive cruise control and a forward-collision warning system help you maintain a safe distance from other vehicles.

In the 2017 model year, Honda added both Apple CarPlay and Android Auto to the built-in touchscreen infotainment system.

There weren't many changes to the 2018 Honda Pilot, but for the 2019 model year, Honda made big adjustments. The headlights and taillights were updated, and a hands-free tailgate was added. The interior was also upgraded with more room for passengers and cargo and an updated instrument cluster that is similar to the one found in the Odyssey. Honda also completely revised the start-stop system and the nine-speed transmission, both of which are found in the Touring and Elite trims. In other trims, the powertrain is the same.

The most significant changes, though, were in the amenities found in the interior. Honda included a 4GLTE hotspot, CabinTalk, and a completely new rear entertainment system. They also made the HondaSensing lane-keeping assist available on all trim levels.

For the 2020 model year, Honda added a new Black Edition trim level to the Pilot. This featured black trim on both the exterior and interior as well as black 20-inch alloy wheels. On the interior, it also featured red trim lighting and a Black Edition logo embossed on both the front seats and the floor mats and included an upgraded steering wheel. The second row also featured captain's chairs.

The 2021 model year saw the Pilot get an upgrade to the 9-speed transmission at all trim levels as well as the addition of a new Special Edition trim level between the EX-L and Touring levels.

In the 2022 model year, the Honda Pilot saw an increase in fuel economy while maintaining the same towing capacity. With 20 mpg in the city as opposed to 19 mpg in 2021, the 2022 Pilot is slightly more efficient than the previous model year. 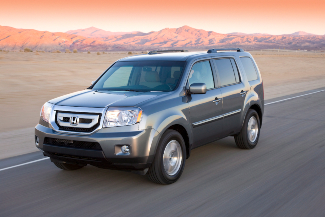 The second-generation 2009 Honda Pilot has a 3.5-liter V6 VTEC engine with 250 horsepower with a five-speed automatic transmission in all models. The gearshift for these models was moved from the steering column to the center console for easier shifting and convenience. The engine retains the Honda variable cylinder management system of the previous generation. EPA fuel mileage estimates for this generation is 23mpg on the highway while the AWD version gets 22mpg. All Pilot models include anti-lock brakes and traction control for safety and handling.

This second-generation Pilot also picked up a driver's seat position memory function that can be programmed for two different people. A powered rear tailgate makes loading and unloading the cargo area easier. There are four basic models to this generation, LX, EX, EX-L, and Touring.

Some trim types include premium features such as a satellite navigation system, power moonroof, and tri-zone climate control for both comfort and safety.

For the 2015 model year, the Special Edition trim level was added with a rear-seat entertainment system, a moonroof, and satellite radio capability. 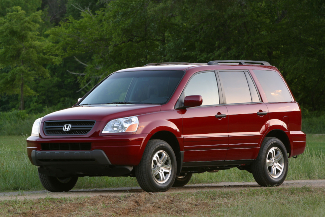 The first-generation Honda Pilot has three different engines throughout its lifespan. The model was originally introduced with a 3.5-liter V6 engine with 240 horsepower for the 2003 and 2004 model years.

In 2005, the engine was upgraded with minor improvements which boosted the horsepower to 255. From 2003-2005, all vehicles included a variable torque management four-wheel-drive system. This system allowed the driver to lock the rear differential and send most of the power to the FWD to deal with slippage in low-speed situations and in certain gears by pushing a button in the dashboard.

In 2006, buyers had the option of choosing a four-wheel-drive or a front-wheel-drive version, both with a 244-horsepower engine, and the variable torque management system was retired. This new engine also came with the Honda variable cylinder management system. This system allows the six-cylinder engine to operate in a four or three-cylinder mode for added fuel efficiency. Every vehicle in this generation has a five-speed automatic transmission.

The Pilot was originally designed with three rows of seats and claimed it could fit up to eight people. However, the third-row seats may be too small to accommodate larger passengers, especially on long trips. The middle and rear rows can be folded down flat for extra cargo space. The suspension is composed of struts and coils in the front and a multi-link suspension with a wide track making for easy loading and transporting of cargo as well as for passenger comfort. A DVD system with separate audio channels is available with some trim levels, but, due to limited space, you can't have both the DVD system and a navigation system at the same time.