Powertrain: A 185-horsepower, 2.4-liter four-cylinder engine with an eight-speed automatic transmission and front-wheel-drive. 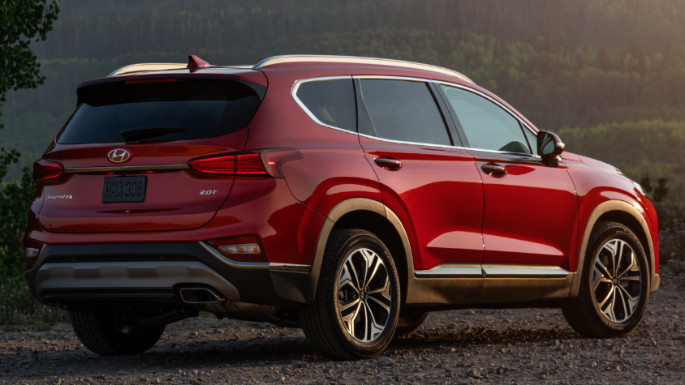 The Hyundai Santa Fe is a midsize, two-row SUV that bridges the gap between the company’s compact Tucson and the large, eight-passenger Palisade models.

For 2020, the Santa Fe gets a new blind-spot monitoring system on Limited models that projects a camera image of what’s around the vehicle in addition to a warning light. Wireless smartphone charging is available on SEL models and standard on the Limited, while a Rear Occupant Alert system is now included on all models.

The 2020 Santa Fe is available in five trim levels. 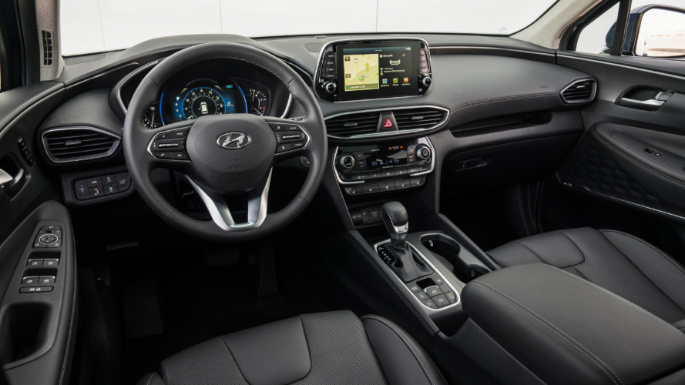 The Insurance Institute for Highway Safety (IIHS) awarded the 2020 Hyundai Santa Fe its Top Safety Pick (its second-highest rating), as the vehicle scored highly in all of its crash tests. It also received high marks in the crash avoidance categories, with standard automatic emergency braking with pedestrian detection.

Every Santa Fe model gets automatic emergency braking with forward-collision warning and pedestrian detection, as well as lane-departure warning and lane-keep assist, and a driver attention monitor when it determines the driver isn’t focused on the road. A Rear Occupant Alert system is now standard on all models, reminding drivers that there could be a passenger or a pet in the rear seat.

An upgraded, ultrasonic version of that system is standard on the Limited and optional on SEL models. The Safe Exit Assist on SEL and Limited models use the blind-spot monitoring system to keep the rear doors locked if an oncoming vehicle is detected, preventing passengers from walking out into traffic. That is an unusual feature that has most commonly been found only on luxury SUVs. 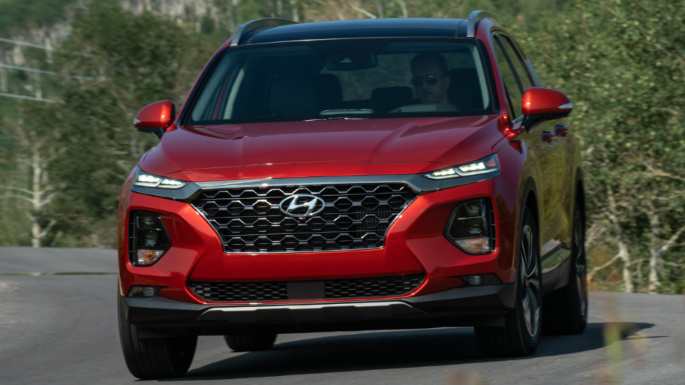 The base Santa Fe SE starts from $27,415, undercutting rivals such as the Kia Sorento by about $1,000, the Chevy Blazer by more than $2,000, and the Buick Envision by more than $7,000. It’s also substantially less expensive than models such as the Honda Passport, Jeep Grand Cherokee, and Nissan Murano, but those models come with more powerful V6 engines as standard equipment. And a modestly equipped Hyundai Palisade is larger, has more seats, more horsepower, and is similarly priced against a loaded Santa Fe.

While a very well-equipped Limited 2.0T all-wheel-drive is just over $41,000 and good value compared to rivals, SEL models are significantly less expensive and can be optioned with more lavish features such as leather upholstery and a hands-free power tailgate. But picking both of the SEL’s available option packages puts it too close to the price of the Limited trim level without benefitting from the top model’s larger touchscreen infotainment system and ventilated front seats, for example. 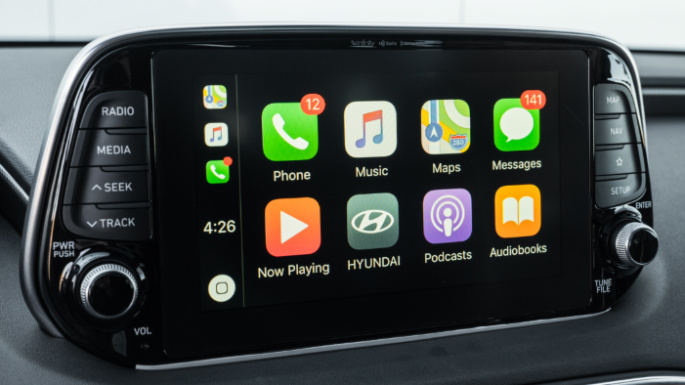 Santa Fe SE and SEL models come standard with a 7-inch infotainment screen, with standard Apple CarPlay and Android Auto connectivity, Bluetooth, and four USB inputs around the interior. An 8-inch touchscreen unit with built-in navigation comes on Limited models. The Hyundai infotainment system is clear and responsive, making it one of the easier systems on the market to use. There are also physical knobs and buttons for commonly used functions.

In addition to the driver assistance technology features, the Santa Fe comes standard with automatic headlamps and automatic high beam assist. SEL and Limited models come standard with Hyundai’s Blue Link telematics system, which includes emergency assistance service, as well as the ability to perform vehicle functions such as operating the horn, door locks, and lights. A wireless smartphone charging pad is standard on Limited and optional on SEL models, as is a hands-free power liftgate. SEL and Limited versions also get keyless entry and push-button start, while the Limited also adds ventilated front seats, heated rear seats, and LED headlights.

The Blind View Monitor standard on Limited uses a camera system to supplement the blind-spot monitoring to allow drivers to see the car in the blind spot, rather than relying solely on lights and audible alerts. 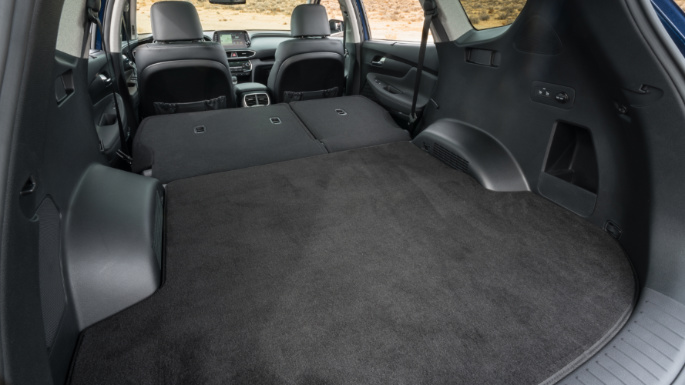 The Santa Fe is among the most spacious in this class, with about 71 cubic feet. Cargo space, with the rear seats up or folded down, is on the higher end and pretty much comparable with the Ford Edge, Kia Sorento, Subaru Outback, and VW Atlas Cross Sport. And the Santa Fe has far more space than the Chevy Blazer, Jeep Grand Cherokee, and Nissan Murano. Only the cavernous Honda Passport has significantly more room.

While the rear seats recline, they don’t slide for a better compromise between legroom or cargo space. The back seat also only folds in a 60/40 split setup without a ski pass-through or a more practical 40/20/40 configuration to accommodate both two passengers and long items. The Santa Fe is also a strict five-seater, unlike the Kia Sorento, which comes with a small third-row seat.

With the standard 2.4-liter engine, the Santa Fe is rated to tow up to 2,000 pounds when properly equipped. Versions with the turbocharged 2.0-liter engine can tow up to 3,500 pounds. Both figures are comparable to the majority of the Hyundai’s rivals. Only the Jeep Grand Cherokee can tow significantly more, especially with its optional V8 engine. 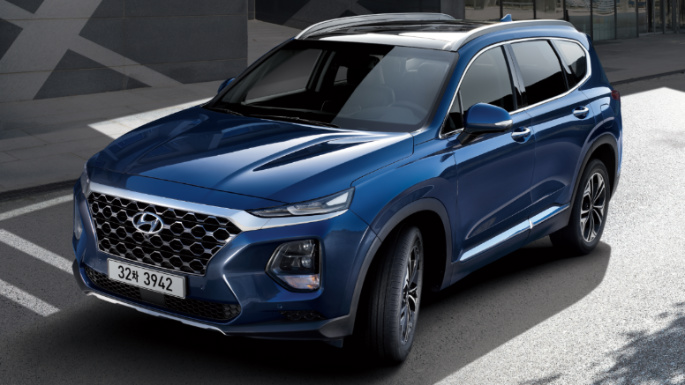 Its styling may be unadventurous, but it only enhances the Santa Fe’s practicality. There are large windows all around for a good view out for everyone inside, as well as reasonable visibility for the driver. Tall doors open wide to make getting in and out easier, too, while there’s a relatively square opening for the cargo area. Unlike some of its rivals, the Santa Fe’s upright shape means it can take better advantage of its maximum cargo capacity, and it also enjoys a low, flat floor for easy loading and unloading. A modestly restyled version of the Santa Fe arrives for 2021.

The Santa Fe’s interior is logically laid out with easy-to-use controls that are also clearly labeled. But there’s nothing particularly exciting or luxurious about it, even on high-end Limited models. While the knobs and buttons feel like quality items, there are some hard plastics on the doors and console that give the impression they were lifted from a less expensive SUV. At least there are generously sized cupholders and door bins, as well as smaller pockets and spaces for phones and wallets.

The Santa Fe comes standard with a 185-horsepower, 2.4-liter four-cylinder. All models come with front-wheel-drive or optional all-wheel-drive, as well as an eight-speed automatic. Even without the added weight of the AWD system, the Santa Fe 2.4-liter versions struggle at anything more than town speeds. While it’s on par with some four-cylinder rivals such as the Buick Envision, Chevrolet Blazer, Kia Sorento, and Subaru Outback, the extra power in the Ford Edge or VW Atlas Cross Sport makes them more confident on the highway than the Santa Fe.

That’s to say nothing about the standard V6 engines in the Honda Passport, Jeep Grand Cherokee, and Nissan Murano.

Santa Fe SEL and Limited models can be equipped with a 235-horsepower, 2.0-liter turbo four that significantly improves acceleration, even if it still doesn’t feel especially powerful.

Even when the engine is working hard to get the Santa Fe up to speed, the interior remains relatively quiet. Noise isolation is one of the Hyundai’s strong points, along with a relatively compliant ride. Handling is competent, if not especially sharp. And don’t expect the Santa Fe to do much more than handle snow or gravel-covered roads. Despite a Downhill Brake Control setting on all-wheel-drive models, the Honda Passport, Jeep Grand Cherokee, and Subaru Outback are far more adept off the pavement. 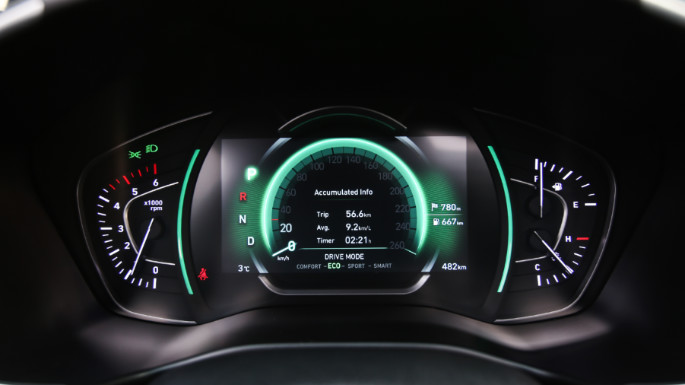 Considering the relatively low power figures from each of those four-cylinder engines, the Santa Fe’s fuel economy is disappointing. The Subaru Outback with standard all-wheel-drive is rated as high as 29 mpg combined without a significant sacrifice in horsepower, while the turbocharged Ford Edge gets 24 mpg combined. Only the V6-powered Honda Passport, Jeep Grand Cherokee, and Kia Sorento do slightly worse than the Santa Fe in fuel economy tests.

Apart from all-wheel-drive, there are no options for the SE.

Apart from all-wheel-drive, there are no options for the Santa Fe Limited.

The Santa Fe Limited 2.0T starts from $39,015 MSRP. It adds to the Limited the turbo four-cylinder engine and 19-inch wheels. All-wheel-drive is the only option.