This 2019 Santa Fe crossover is one of the most popular models within Hyundai’s lineup.

Starting with the 2019 model that we tested, the five-seater is just called the Santa Fe, and the bigger model is the Santa Fe XL (in 2020 the XL will be replaced by the even larger Palisade, but ignore that for now).

Within Hyundai’s crossover family, this 2019 Santa Fe is bigger than the bite-sized Kona and compact Tucson, but it’s smaller than the Santa Fe XL.

It competes with a variety of high-volume crossovers in one of the hottest segments in the industry. Rivals include the Subaru Outback, Ford Edge, Toyota RAV4, Nissan Murano, the Chevy Equinox and upcoming Blazer, Jeep Cherokee, Volkswagen Tiguan and the Honda Passport.

Hyundai completely redesigned the Santa Fe for the 2019 model year, giving it a fresh new look inside and out, a host of standard active safety features and two engine options.

The standard engine on the 2019 Santa Fe is a 2.4-liter four-cylinder unit that makes 185 horsepower and 178 pound-feet of torque.

On higher-trim versions of the Santa Fe, buyers can opt for the $1,600 turbocharged engine. It’s 2.0-liters and makes 235 horsepower and 260 pound-feet of torque.

Both engine options come with an eight-speed automatic transmission.

The Santa Fe comes standard with front-wheel drive; all-wheel drive is a $1,700 option on all models. 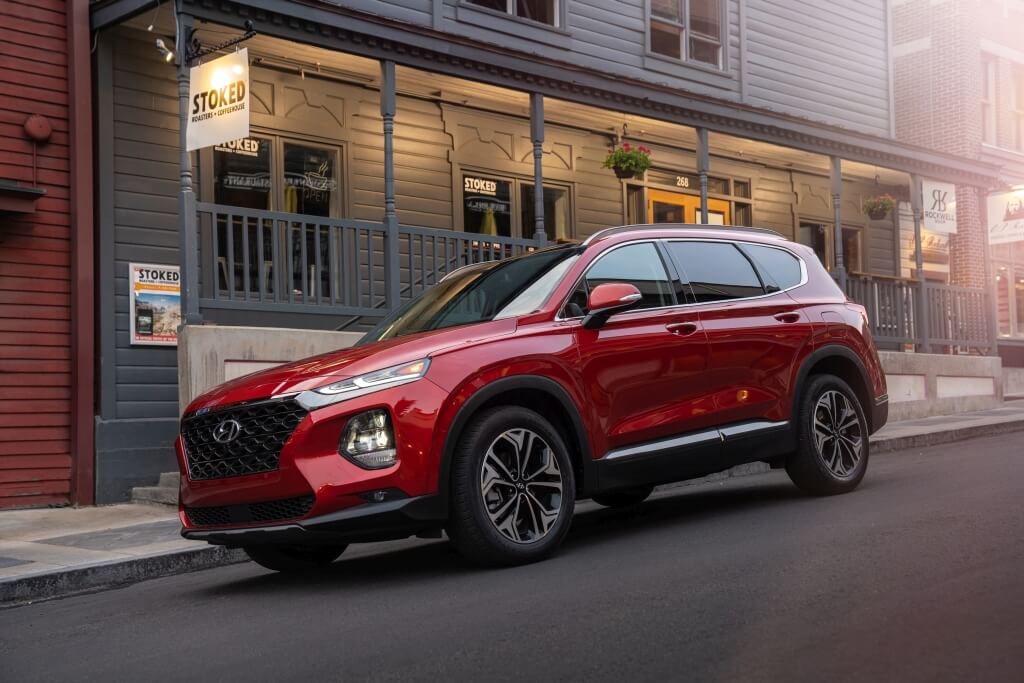 Safe travels. Hyundai has made a host of active safety features standard on every version of the 2019 Santa Fe, no matter the price. These features include pre-collision braking with pedestrian detection, adaptive cruise control, rear cross-traffic alert, blind-spot monitoring and warning, and lane keep assist.

Roomy interior. Not only does the Santa Fe have tons of comfortable space for five tall adults, but the rear seats are configurable in a variety of ways that will keep owners and passengers plenty happy. The rear seats fold almost flat with the cargo area to haul lots of gear. But the Santa Fe’s real ace in the hole? On the SEL Plus trim and up, the rear seats slide fore and aft nearly a foot. Since they’re split 60/40, this gives users a lot of options, including sliding the rear seat all the way forward when there’s a kid in a car seat for easy sippy-cup access. 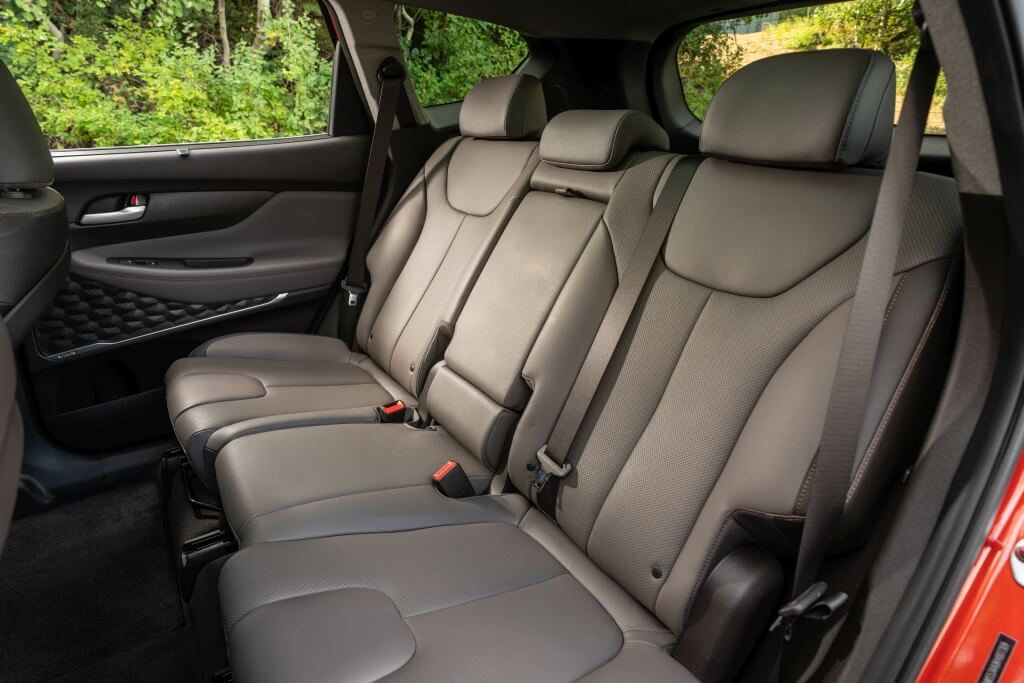 Stylish exterior. Hyundai did an excellent job with the looks of this new Santa Fe, particularly with the exterior. It stands out -- in a good way -- without being weird or ungainly. The back, in particular, is a design that wouldn’t be out of place on a crossover costing tens of thousands more than this Hyundai. That’s a nice touch for a mainstream crossover.

The power -- or the lack thereof. We spent most of our time in the optional turbo model, and even that version, with its 235 horsepower, never felt overwhelmingly powerful. Sure, it’s enough to get you around town, but after driving the lesser (non-turbo) base model, it felt hard to justify the extra money for the turbo engine.

Mundane interior. On most models -- save for the high-end Ultimate version -- the Santa Fe’s insides feel uninspired. There’s something drab and basic about it -- an unfortunate situation on a vehicle that can cost well into the $30,000 range. We wish Hyundai had made available a more eye-catching trim might -- or the ability to add a sunroof to trims other than the expensive ones. 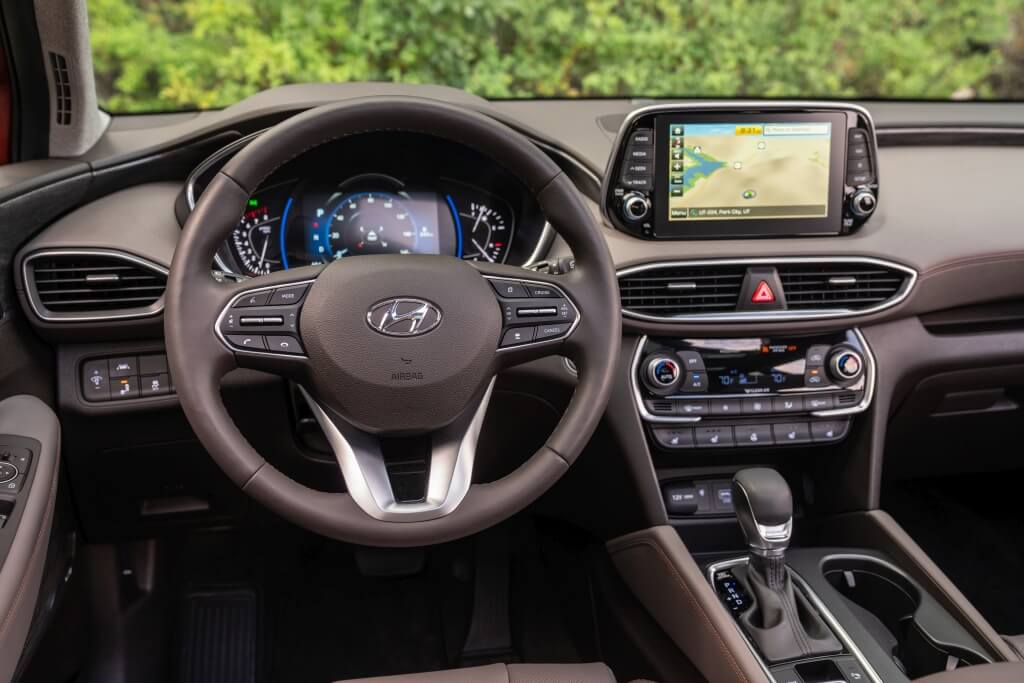 Weak transmission. It’s sleepy. What does that mean? Its shifts seem a little slow and imprecise. Plus, when you need power (on the on-ramp or when you’re passing someone on the road), the gearbox needs too many (slow) downshifts to find meaningful power.

For this 2019 Santa Fe, Hyundai decided to eliminate options and option packages and instead just offer five trim levels aimed at giving a variety of consumers with a variety of budgets exactly what they’re looking, while also keeping things simple for dealers.

The SEL starts at $28,580 and adds a seven-inch digital instrument panel, multiple drive modes, push-button start, power driver’s seat, heated side mirrors, fog lights, heated front seats and satellite radio connectivity. This is the model we’d likely choose -- or if you can swing it, go for the next trim up.

Next is the SEL Plus, another volume seller in the Santa Fe lineup. For $30,780, it adds to the SEL things like a rear occupant alert (so you don’t forget a child or pet after you park), parking sensors, dual climate control, 18-inch alloy wheels, hands-free power liftgate, manual sunshades for the rear windows and a 12-speaker Infinity audio system.

The Limited goes for $33,580 and is the first trim that can come with the optional turbocharged engine (remember, that’s a $1,600 addition). All Limited models include features like a panoramic sunroof, LED headlights and taillights, leather seats and a power front passenger seat.

Finally, at the top of the Santa Fe hierarchy is the $36,430 Ultimate, which has nearly every option that you can think of, including heated and cooled leather seats up front, heated rear seats, a heated steering wheel, wireless smartphone charging, an eight-inch touchscreen navigation system and a 360-degree camera system. As with the Limited, buyers can add to the Ultimate the $1,600 optional turbocharged engine.

All models listed above are front-wheel drive; all-wheel drive is another $1,700.

The Santa Fe has a lot of competition, so we just recommend that you also look at the following models: the Subaru Outback, Kia Sorento, Honda CR-V or Pilot, Toyota RAV4 or Highlander, Nissan Murano and the Ford Edge.