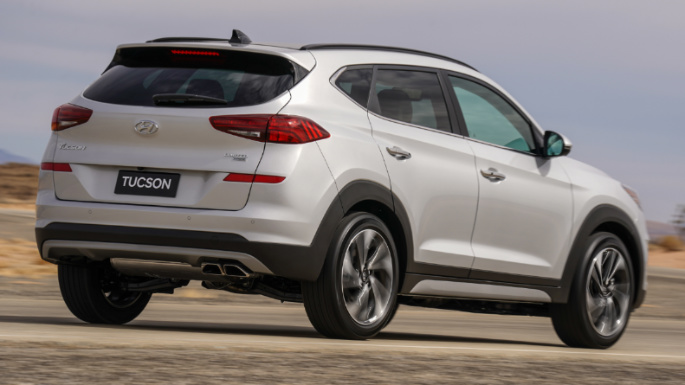 Hyundai thoroughly updated the Tucson for the 2019 model year, so changes this year are not as dramatic. New colors and updated features for higher trim levels complete the list of meaningful changes for the 2020 version. The Tucson used to be Hyundai’s smallest crossover, but it got a promotion in the lineup when the Kona premiered.

Despite its movement upward in the Hyundai catalog, the Tucson remains a good value that offers a decent list of standard features for an affordable price.

The Tucson is a compact crossover that competes with the Jeep Compass and Cherokee, Ford Escape, Toyota RAV4, Honda CR-V, Mazda CX-5, Kia Sportage, Chevy Equinox, and Nissan Rogue. It is aimed at car buyers who want the extra utility afforded by a crossover without the ever-climbing price tags that are attached to some vehicles in the segment.

The Tucson’s powertrain warranty may not be transferrable between owners, but it’s still one of the longest available on the market. The Tucson also has grown-up styling that mirrors its larger and more expensive sibling, the Santa Fe. Interior finishes and materials are also more mature and upscale than many of the Tucson’s competitors, which adds to the bang-for-the-buck factor. 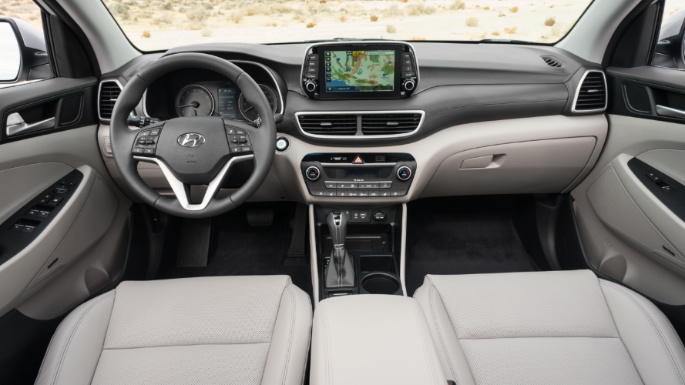 The Insurance Institute for Highway Safety (IIHS) awarded the Hyundai Tucson with a Top Safety Pick designation for the 2020 model year (its second-highest rating), but only on models with the optional front crash prevention tech and optional headlights. That rating includes ‘Good’ scores for all crashworthiness categories, which covers every Tucson regardless of equipment. The base headlights were rated ‘Poor,’ and the LATCH system ease of use was rated either ‘Marginal’ or ‘Acceptable,’ depending on the trim level. The optional front crash prevention system was rated ‘Superior,’ and the standard system was not tested.

The National Highway Traffic Safety Administration (NHTSA) rated the Tucson five out of five stars in all crash testing categories except for rollover resistance, where it was rated four stars. This is not abnormal for vehicles in the SUV and crossover space, because their taller ride height makes them more susceptible to tipping. 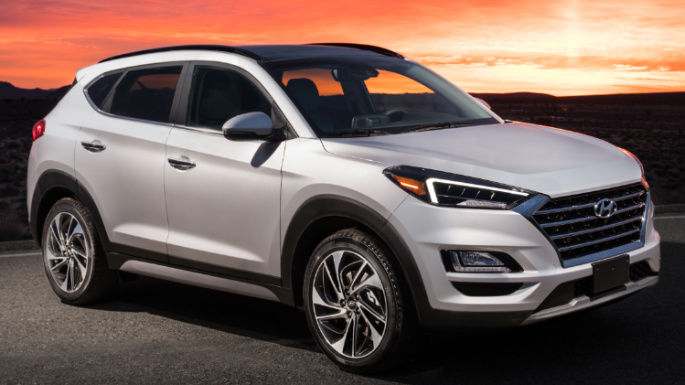 The Tucson’s starting price of $24,690 (after $1,140 destination) represents an excellent value in the compact crossover segment. It undercuts the major competition from Honda and Toyota, as well as the Nissan Rogue.

Stepping up just one trim level from the base model brings a load of advanced safety features, which is a big bonus for added confidence without inflating the price tag.

The base model comes well equipped out of the box. Standard features such as Apple CarPlay, Android Auto, USB inputs, and a strong showing in the advanced safety feature department make the Tucson an excellent pick in almost any configuration.

The Tucson Ultimate starts at $33,040 after destination, but for that money, it includes heated and cooled leather seats, a panoramic sunroof, an Infinity premium audio system with eight speakers, and more. 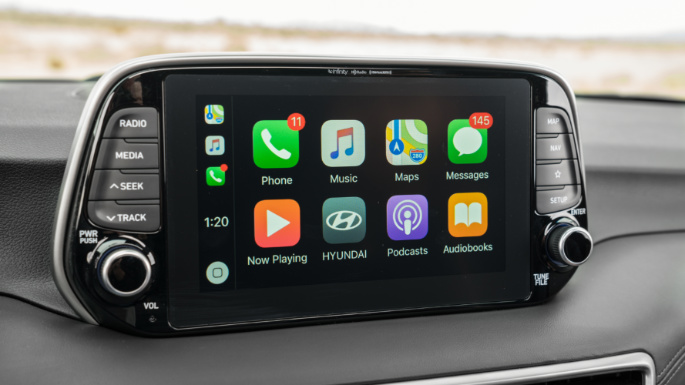 Hyundai’s infotainment system is occasionally criticized for being too simple, but it’s that simplicity that makes it easy to use and understand, especially when the vehicle is in motion. Menus are laid out in a straightforward manner, the screen is responsive, and there’s never any doubt about how to change a setting or configuration.

Available features include a 7-inch touchscreen with SiriusXM radio, HD radio, Hyundai Blue Link, and second-row USB outlets. The Ultimate trim gets an 8-inch touchscreen with navigation, a 315-watt Infinity sound system, and a 4.2-inch color LCD display. The Sport and Limited trims also get the Infinity audio system. 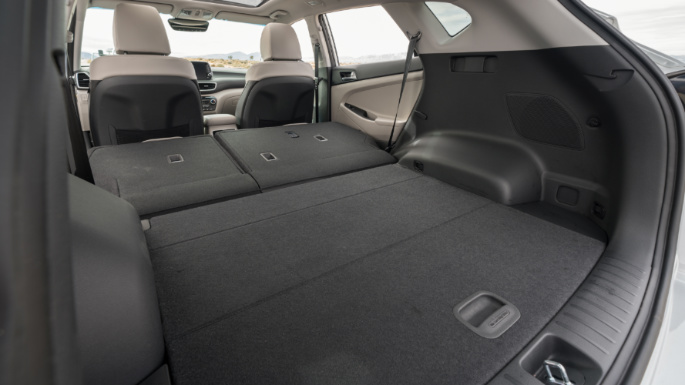 The Tucson is compact, which unfortunately translates to a compact cargo space. Where others in this segment are able to carve out more cargo room with an equal or smaller vehicle footprint, the Tucson’s cargo hold is smaller than we’d like to see. With seats up, it manages 31 cubic feet, which trails rivals like the Honda CR-V by almost ten cubic feet. Hyundai at least helps mitigate that issue with a low liftover height and easy-folding rear seats.

The Tucson is rated at 2,000 pounds of towing capacity, which outdoes the Honda. It should be noted that the smallish engines will struggle at times with the heaviest of loads.

Inside, the Tucson’s cabin has enough small-item storage to keep families happy, as there’s room to stow cellphones, wallets, purses, and almost anything a small child would need for the ride.

Hyundai equipped the Tucson with premium-feeling cloth seats at the base trim level, which makes it both more durable inside and more comfortable for longer trips. 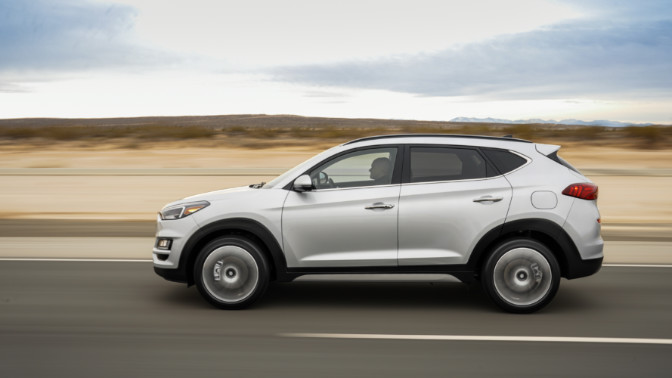 The Tucson’s move toward the larger Santa Fe’s styling makes it look more upscale and mature than it did previously. Stronger lines also help stretch its profile and make it look larger than its dimensions would suggest.

Interior finishes in the Tucson feel upscale and more expensive than they are. This adds to both the vehicle’s value and its comfort on long trips.

Controls, settings, and buttons are placed cleverly and in such a way as to be easily reachable for the driver and front passenger. In higher trims, the larger touchscreen is mounted high on the dash for easy visibility, and Hyundai’s decision to leave a standard gear shift level in place makes it easy to adjust to the Tucson’s interior functions.

The Tucson’s low ride height and gently bolstered seats make it easy to enter and exit the vehicle. For parents with kids, this translates into simple loading and unloading of car seats. Generously sized rear door openings and a gently sloping roof mean there will be fewer bumped heads for kids that need to be lifted into seats. It also contributes to a comfortable ride for most adults in the back seat. 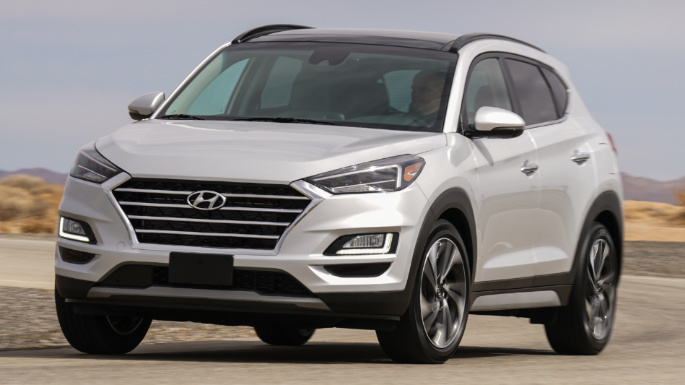 The Tucson is a comfortable cruiser. It doesn’t offer world-class handling or a sporty ride, but the tradeoff is a confident and controlled ride over most road surfaces. No matter the trim, the Tucson remains composed and handles bumps well, though the roughest roads can make it feel unsettled at times.

Neither engine provides a thrilling driving experience. That said, both are smooth, refined, and don’t struggle to get the compact Tucson up to speed. Combined with the six-speed transmission, there are very few hiccups and unwanted sounds when underway.

Even with its somewhat soft ride, body roll and lateral movements are well controlled. That may seem at odds with the Tucson’s floaty ride, but it works out well to help the driver keep the Tucson pointed in the right direction when corrective action is needed. 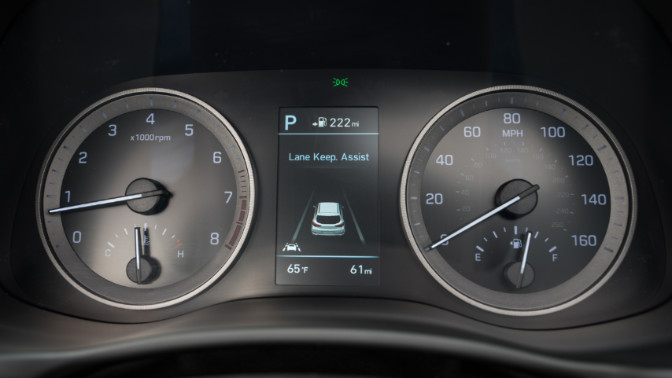 When equipped with the 2.0-liter engine and front-wheel drive, the Tucson is rated at 23/28/25 mpg city/hwy/combined. Those numbers change to 22/25/23 with all-wheel-drive.

The Tucson is not available with a hybrid or plug-in hybrid powertrain, which puts it behind many of its rivals. Two of the most popular, the Toyota RAV4 and Honda CR-V, offer a hybrid trim that achieve impressive fuel savings over their gas counterparts.

Even comparing apples to apples, the Tucson lags many of its gas-powered rivals. 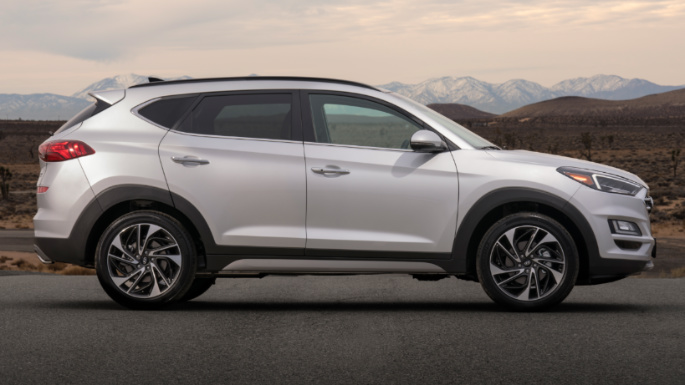 If it were our money buying a Hyundai Tucson today, we’d opt for the mid-range Sport trim. It brings several of the convenience and luxury features that its more expensive counterparts have without the few-thousand-dollar markup.

That said, there’s really no bad deal to be had with the Tucson, as even its top trims are reasonably priced and come with features that cost quite a bit more in other vehicle brands.