The first Jeep Grand Cherokee debuted at the 1992 North American Auto Show when Chrysler president Robert Lutz drove it through a plate of glass at Detroit's Cobo Hall to show off its capability. Though merely a marketing ploy, this action would prove indicative of the Grand Cherokee's attitude and development through the coming years.

It was initially designed as a replacement for the regular Jeep Cherokee but ended up being more of a substitute for the Grand Wagoneer that was discontinued in 1991, and Cherokee sales justified its own continued existence. American Motors was developing the basis for the eventual Grand Cherokee before Chrysler bought Jeep from them in 1987. It was the first Jeep product launched under Chrysler, as well as the first Jeep to use computer-aided design software, ensuring engineering efficiency and consistency.

2014 saw a mid-cycle refresh with models receiving extensive updates, including a new 8-speed automatic transmission and several styling revisions. The Grand Cherokee SRT8 was renamed the SRT. A new edition to the Grand Cherokee lineup came in 2018 with the Grand Cherokee Trackhawk. It features the 6.2-liter supercharged V8 from the Dodge Challenger SRT Hellcat and produces 707 horsepower, making it the most powerful SUV currently on sale. 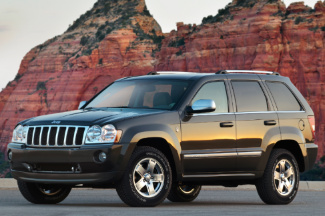 2005 saw another complete redesign of the Grand Cherokee, known internally as the WK. The 4.0-liter, six-cylinder engine was replaced with a 3.7-liter V6 engine, producing 210 horsepower. The 4.7-liter V8 carried over from the previous generation, making 230 horsepower, while a new 5.7-liter Hemi V8 was added to the lineup and produced 325 horsepower. A 5-speed automatic transmission came standard with rear-wheel-drive. Four-wheel-drive was optional with the newly available Quadra-Drive II four-wheel-drive system.

The WK's front fascia was flatted, and its overall design returned to the original Grand Cherokee's boxy styling roots. Independent suspension and rack-and-pinion steering were firsts for the Grand Cherokee. Options included an infotainment system, side curtain airbags, and navigation, with remote start and a backup camera becoming available several years after its release. Side curtain airbags became standard in 2007 with a slight styling refresh coming shortly after that in 2008. 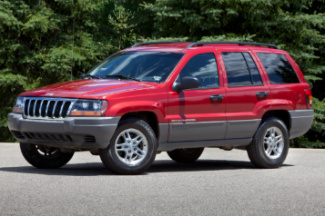 2004 was the final year of WJ production and included several more minor styling updates as well as several special edition models, including the Columbia and Rocky Mountain Editions. 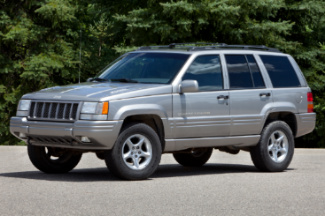 The ZJ was first offered as a 1993 model. It was built on a monocoque frame, provided luxury touches such as power windows, keyless entry, and four-wheel ABS, and was set to compete directly with the Ford Explorer. Three trims were initially available: Base (later changed to SE), Laredo, and Limited, though the SE trim was dropped after only a few years.

A 5-speed manual transmission was standard with an optional 4-speed automatic transmission. In 1995, the manual transmission was discontinued due to low consumer demand, and the 4-speed automatic became standard. The very first Grand Cherokees were only available with AMC's 4.0-liter straight-six engine, producing 190 horsepower. Shortly after its debut, an optional 5.2-liter V8, producing 220 horsepower, became available. For its last production year in 1998, the first-generation Grand Cherokee Limited received a larger 5.9-liter V8 engine option producing 245 horsepower.

Minimal additions accompanied the ZJ Grand Cherokee through its infancy, though small improvements such as four-wheel disc brakes, the addition of a passenger-side air bag, ride quality improvements, and several appearance packages were offered throughout its first run.