The 2019 Jeep Wrangler is an off-road capable SUV that competes with vehicles like the Toyota 4Runner, though it has very few direct competitors. Because of its very focused off-roading orientation, there are not many other new vehicles that offer a comparable feature set, though the upcoming Ford Bronco will be close. The Wrangler was redesigned for the 2018 model year and has light updates for 2019 that include new safety features and new paint colors.

The Wrangler has been produced by various brands over the years, eventually landing with Jeep in the late 1980s. Even though it is a modern vehicle with some of the latest technologies, the Wrangler’s purpose and appearance today are nearly the same as they were when the vehicle was first produced several decades ago. Like the vehicles before it, the Wrangler continues to use body-on-frame construction, rigid live axles, and removable doors. The new Wrangler, also known as the JL Wrangler, takes those rugged features and adds modern electronically-controlled suspension and four-wheel drive components to make the on- and off-road experience as convenient as possible.

The Jeep Wrangler is aimed at active new car buyers who plan to take the vehicle on trails and off-road. As such, many versions of the Wrangler are equipped with features like skid plates, heavy duty suspensions, and four-wheel drive. These options give the Wrangler unmatched abilities with greater approach and departure angles than other vehicles on sale. These angles are the maximum angle of a ramp or obstacle that the vehicle can drive on without scraping body panels. The Wrangler also has an optional feature that can electronically disconnect sway bars, which allows the suspension to move much more freely, also increasing the vehicle's climbing and descent abilities.

The 2019 Wrangler is available in four trims: Sport, Sport S, Sahara, and Rubicon. Two- and four-door configurations are available, and Sahara trim is only offered with four doors. Various special editions become available at times, including the Moab limited edition, which has blacked-out wheels and trim pieces and groups other popular options together, such as an Alpine stereo system, upgraded infotainment unit, and premium interior upholstery.

The four-door Wrangler Unlimited configuration was introduced over ten years ago to improve the Wrangler’s appeal for buyers needing more space. The configuration became so popular, that by 2017 nearly three quarters of all new Wranglers on sale were Unlimited models.

The Jeep Wrangler is unique in the automotive world, because its basic appearance hasn’t changed much over the vehicle’s storied history. 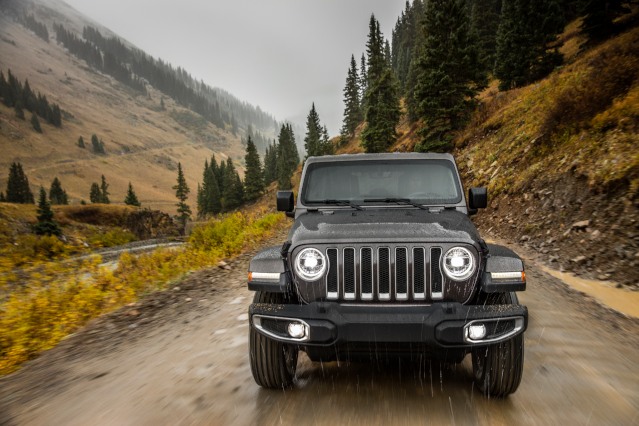 The Wrangler’s complete overhaul in 2018 brought modern updates to the classic design, and included available LED lighting, an all-new front fascia, optional winch-ready bumpers with removable end caps, larger windows, and improved aerodynamics. One thing that has remained the same is the Wrangler’s ability to have its top, doors, and windshield removed, which are standout features in the market today.

Exterior changes for the 2019 model year are less substantial, amounting to a new paint color.

Despite the Wrangler’s traditional looks, critics have praised the recently updated vehicle for its supremely functional appearance and versatile top configurations. The new Wrangler is available with a variety of wheel sizes, ranging from 17 inches to 19 inches, multiple paint and body configurations, soft and hard tops, and can be customized with lighting and off-road specialty kits. Jeep also builds the Wrangler to be very flexible from the factory, with the ability to add bigger wheels, lighting kits, winches, and various other off-road recreation items.

Like the rest of the Wrangler, the interior was significantly updated for the 2018 model year. The center console was redesigned, seats were updated with adjustable bolsters and lumbar supports, and available comfort features like a heated steering wheel were added. 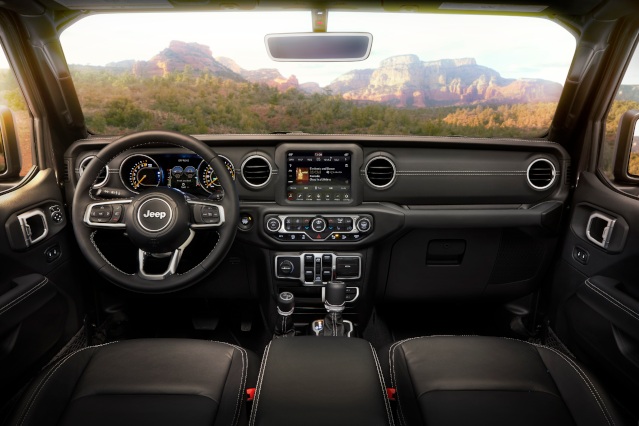 As a rugged off-roader, the Wrangler can be ordered as a barebones vehicle, only offering the essentials for daily use. On the other end of the spectrum, Jeep offers the Wrangler as a four-door SUV with several options that increase comfort and convenience like leather seating, upgraded sound systems and infotainment, and a variety of hard and soft top choices.

Critics have given the new seats high marks for their comfort and support but note that adjustments are difficult to make on the move. The Wrangler comes standard with cloth upholstery, which can be upgraded to a Premium cloth. Reviewers have noted both versions to be comfortable but rugged and stain resistant, which is important when taking the vehicle off the pavement.

The Wrangler’s near-vertical dash is low enough for great outward visibility and the seating position provides good side visibility. Reviewers take away points for rear visibility, however, with many noting that the thick roof pillars, roll bars, and other equipment can obstruct viewing angles.

Rear seating accommodations are roomy and benefit from a more reclined seatback. The two-door Wrangler’s boxy shape and folding front seats may make back seat entry and exit difficult for taller adults or people with limited mobility. Four-door Wranglers have much easier access to the rear seats and more room in the second row as well. Many reviewers recommend the larger Unlimited Wrangler for buyers that need to carry children, because of its much easier access to loading and unloading car seats.

With the rear seats upright, the Wrangler’s cargo volume is 31.7 cubic feet, which falls short of the Toyota 4Runner’s 47.2 inches. When the seats are folded, cargo room opens up to 72.4 inches, which reviewers note as being generous for a vehicle of the Wrangler’s size. Access to the rear storage area is hindered by a two-step process that involves moving the rear windshield and opening the gate, which some reviewers mention as being difficult when carrying bags or children. 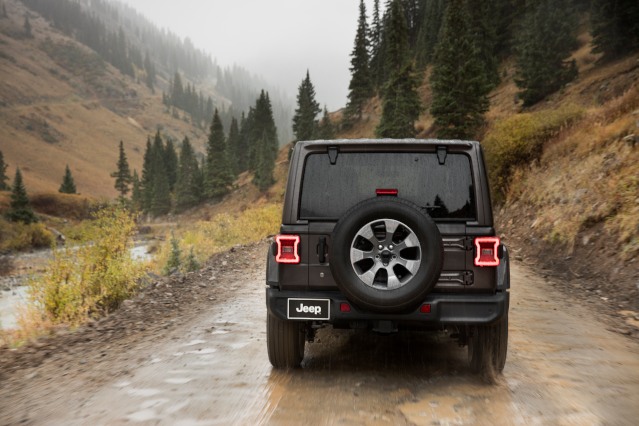 There are under-floor storage spaces and small-item storage in the cabin that make daily driving with the Wrangler more convenient. The Wrangler also has front and rear compartment storage trays and cargo tie-down loops.

Critics note that the Wrangler’s overall utility and usability are impacted by its increased ride height and off-road focus. Loading cargo into the rear area is made more difficult by the fact that the Wrangler is taller than other SUVs in its class. Two-door versions will be difficult for families with small children, as both the height and smaller back seat area hinder entry and exit.

The open-air experience that the Wrangler offers comes with tradeoffs in the form of increased road and engine noise inside the cabin. Hard top versions do a much better job of filtering out excessive noise from outside, but Wranglers with a soft top let quite a bit of sound filter through.

The Wrangler can tow up to 3,500 pounds, which is good enough for most small recreation vehicles and boats.

The Wrangler comes standard with a five-inch display that can be upgraded to a seven-inch display or an 8.4-inch display with navigation. All versions of the infotainment unit come with Fiat Chrysler America’s Uconnect infotainment system, which reviewers have praised as being smooth, colorful, and easy to use. 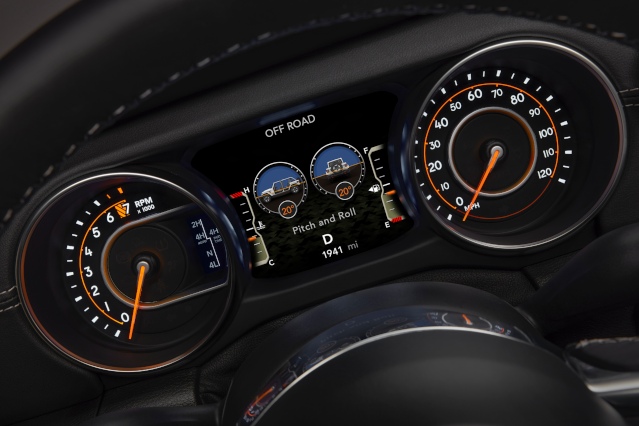 The Uconnect system uses on-screen controls and configurable icons that allow for flexibility in what is displayed on the screen. The standard five-inch screen comes with integrated voice commands, Bluetooth phone and audio connections, and available SiriusXM. This smaller screen has an older version of Uconnect than larger screens.

Within the Uconnect infotainment unit, Jeep has added a special and optional Off-Road Pages function. This shows real time information on the status of the transfer case, ride height, pitch of the vehicle, and the currently selected drive mode.

All 2019 Wranglers come with advanced multistage airbags, a backup camera with gridlines, electronic stability control, and hill-start assist. Advanced safety features are optional and are sold in groups: The Active Safety Group includes rear park assist, blind-spot monitoring, and LED tail lamps. The Advanced Safety Group has adaptive cruise control and forward collision warnings. Both options groups are available for all but the base Sport trim Wrangler.

The 2019 Wrangler hasn’t been rated by either of the main testing agencies in the United States, the NHTSA or IIHS. The new Wrangler has been tested by Europe’s testing agency, NCAP, which gave it good scores in side impact testing and for whiplash testing. The agency noted that the Wrangler provided marginal protection for the chest, neck and body areas for the driver and adult passengers during front-impact crash-testing.

The Wrangler is one of the most capable off-road vehicles you can buy today. Tall ride height, coupled with standard skid plates and an optional limited-slip differential, give the Wrangler unmatched abilities. Sahara models are available with an automatic four-wheel drive system that functions like all-wheel drive, kicking in when traction is lost. Critics praise this system for its convenience and ease of use over a traditional four-wheel drive system that has to be shifted on and off when needed.

Recent updates to the Wrangler have made it more refined on-road and more capable off-road. Reviewers agree that the latest version of the Wrangler is more compliant and easier to drive than ever before but find that the ride is still choppier and more truck-like than competitors.

The 2019 Jeep Wrangler is considered to have average fuel economy. Two-door Wranglers with the 2.0-liter four-cylinder engine have EPA-estimated fuel economy ratings of 23/25/24 MPG city/highway/combined that change to 22/24/22 MPG when equipped with four doors.

When equipped with the 3.6-liter V6 and manual transmission, the two-door Wrangler’s fuel economy ratings are 17/25/20 MPG city/highway/combined. Four-door models are rated at 17/23/19 MPG. With an automatic transmission, those numbers change to 18/23/20 for both models.

The four-cylinder engine helps the Wrangler best rivals like the Toyota 4Runner, which achieves its best fuel economy ratings in two-wheel drive-only configuration at 17/21/18 MPG city/highway/combined.

The Wrangler, in its most basic forms, is considered by many critics to be too stripped-down for many buyers. At under $30,000, the Wrangler Sport lacks many features that buyers expect as standard, like power windows and door locks. The most recommended trim level from reviewers is the Sport S, which adds in creature comforts like air conditioning and includes power windows and door locks that may be a deal breaker for many buyers.

The Wrangler Sport S has an MSRP that starts at $32,740 with destination and has power windows and door locks, high-gloss 17-inch wheels, air conditioning, and remote keyless entry. Four-wheel drive is standard. Upgrading to the four-door Unlimited model adds $3,500.

The Wrangler Sahara has an MSRP that starts at $39,890 after destination and includes special Sahara badging, automatic headlights, 18-inch wheels with all-terrain tires, dual-zone climate controls, LED footwell lighting, premium cloth seating surfaces, a universal garage door opener, a 115-volt power outlet in the center console, and a rear-seat USB port. The Wrangler Sahara is only available in the four-door Unlimited configuration.