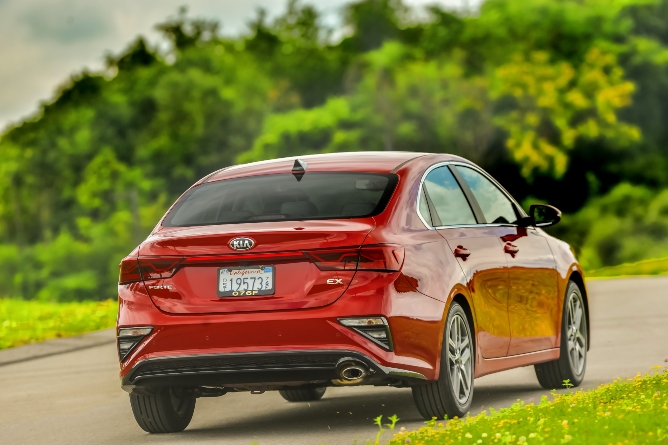 The Forte is Kia’s compact sedan and is one of a staggering six sedan models the brand offers. It has been fully redesigned for the 2019 model year to include new standard safety technology, which has made it more competitive with strong rivals like the Toyota Corolla and Honda Civic. The Forte replaced Kia’s previous compact car, the Spectra.

The Forte is offered in four trims: FE, LXS, S, and EX. A special EX Launch Edition is available that groups premium options and design touches into a $3,210 package.

All models come with a 2.0-liter four-cylinder engine that produces 147 horsepower and 132 pound-feet of torque. While the car would benefit from a few more horses under the hood, the Atkinson Cycle technology and cooled EGR system help the powertrain deliver stellar real-world fuel economy. The car uses a continuously variable transmission that has been wrapped in sound-deadening material to reduce the drone that the gearboxes sometimes generate.

Now in its third generation, Kia redesigned the Forte with more refined styling inspired by the Stinger fastback sedan. The front fascia, including the headlights and turn signal indicators, are all intended to be Stinger-like, and the look is much more grown-up than previous versions of the car. The passenger space has been moved further back, which makes the hood longer and trunk shorter. The changes were intended to make the car look more athletic and muscular.

Interior space benefits from a 3.2-inch increase in the Forte’s overall length, which allows for more back seat legroom and a larger trunk. The 15.3 cubic-feet of cargo space contained in the Forte’s boot is among the largest in the segment. The car also grew in width for the 2019 model year by nearly an inch. 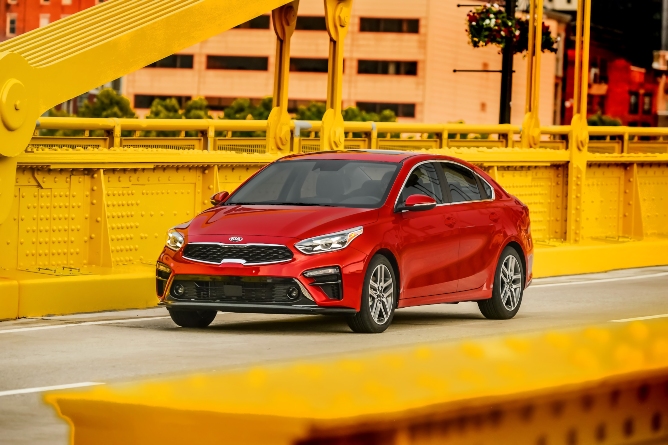 Safety is a priority in the new Forte, and as a result the base model of the car comes standard with advanced technologies that were optional even on luxury cars just a few years ago. Forward collision warnings, lane keeping assist, driver attention warnings, and lane departure warnings are all standard. The car can be equipped with adaptive cruise control, blind spot collision warnings, and rear cross-traffic alerts. The IIHS gave the Forte top marks for 2019, awarding it a Top Safety Pick + designation.

Fuel efficient. The Forte is a true fuel-sipper, achieving solid fuel economy numbers in all configurations. The EPA estimates it at 27/37/31 MPG city/highway/combined in base manual transmission format. Those numbers change to 31/41/35 MPG city/highway/combined for the base FE trim with a continuously variable transmission and 30/40/34 MPG for all other trim levels. In our week with the Forte, we saw a vehicle-estimated fuel consumption of 31.4 MPG. 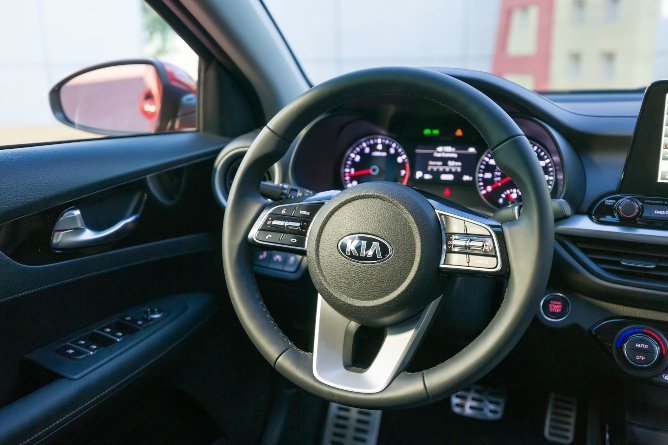 The Forte’s notable fuel economy numbers are due in part to the engine’s Atkinson Cycle technology. The engines are rarely seen outside of the hybrid vehicle space, prioritizing efficiency over power delivery.

Comfortable. The Forte’s front seats are supportive and well-padded – enough to remain comfortable for longer trips. The synthetic leather upholstery in our Kia Forte EX test car never felt sticky or fake, which is more than can be said about many vehicles in the segment, where the leatherette feels much closer to vinyl than a natural material.

Rear seat passengers are treated to generous head and legroom, thanks to the Forte’s newly-enlarged proportions. While the car is rated to carry five people, four adults can ride comfortably – though there will be a tug of war between front passengers’ comfort and rear seat legroom. 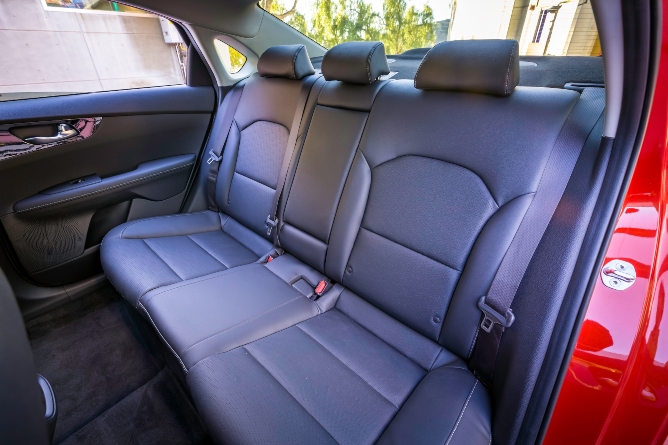 Well-equipped. The least expensive FE trim comes standard with Apple CarPlay and Android Auto, lane keeping assist, forward collision warnings, a driver attention warning, and dual-zone automatic climate controls. These are standout features in a car that starts under $18,000, and even competes with vehicles in much higher price brackets.

Under $24,000 maxed out, the Forte EX offers a long list of tech and comfort features, again chasing vehicles that cost a lot more. Kia's infotainment system is excellent, and the available Harman Kardon sound system is better than most in the segment.

Busy ride. The Forte’s ride is surprisingly firm for a budget family-hauler. All but the smallest of road imperfections are noticeable from the driver’s seat, and rough surfaces jostle the car thoroughly. At the end of the day, it's a front-wheel drive economy car, not a Kia Stinger, and should drive as such.

Lackluster power. Power delivery in the 2019 Forte comes courtesy of a 2.0-liter four-cylinder engine that makes 147 horsepower and 132 pound-feet of torque. For a city cruiser, acceleration is adequate - but only just. Reaching highway speeds takes time, and passing is an exercise in timing and patience.

Budget interior materials. It’s no surprise that a sub-$18,000 car will have sub-$18,000 parts. In lower trims, the Forte’s interior is awash with hard plastics, but higher trim levels benefit from soft-touch door panels and dashboard covering. 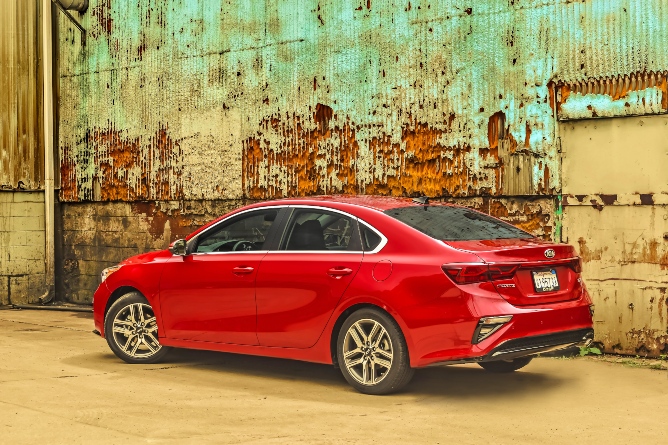 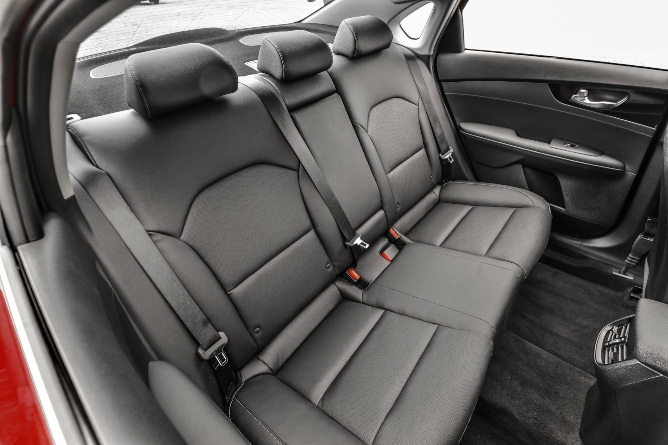 The Forte FE has a starting price of $17,790 before destination and has a 2.0-liter four-cylinder engine and six-speed manual transmission. A continuously-variable transmission is available. 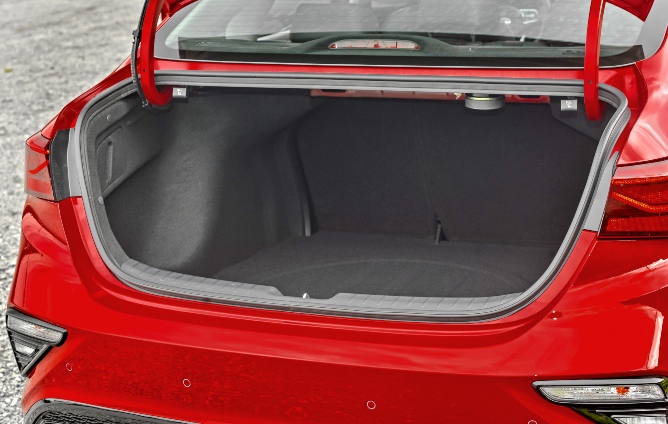 The Forte LXS has a starting price of $19,190 before destination charges, and comes with chrome exhaust tips, 16-inch wheels, selectable drive modes, and folding rear seats.

The Forte S has a starting price of $20,290 before destination charges, and comes with LED daytime running lights, 17-inch wheels, voice recognition, SiriusXM Radio, tweeter speakers, a folding rear center armrest with cup holders, and a leather wrapped steering wheel/shift knob. This trim can be equipped with optional advanced safety equipment and a power sunroof.

Unless we were shopping for an absolute new car bargain, we’d opt for the top of the line EX trim. Maxed out, the Forte barely creeps into the mid-$20,000 range and is an awful lot of car for the money. 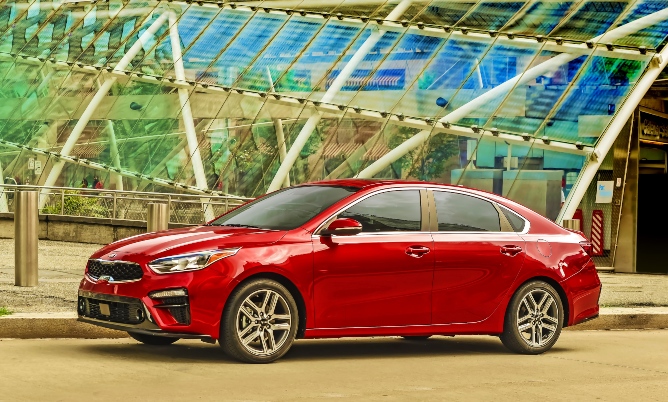 The compact sedan market isn’t just for budget buyers anymore. Most cars in the segment come standard with an array of entertainment and safety tech and the class has become even more intensely competitive in recent years as a result.

The Toyota Corolla is offered in both sedan and hatchback formats now, both of which come standard with Toyota Safety Sense and strong tech features.

The Honda Civic has fun styling and has Honda Sensing safety technology standard.

The Hyundai Elantra has a starting price of under $15,000, making it a true budget champion. Like the Kia, it features a 10-year 100,000-mile warranty. Buyers will have to pony up to around $24,000 to get everything the Elantra offers, but the mid-range trims bring plenty of technology and safety features for the price.