Would we buy one? Yes! It's a great rival to the more mundane Toyota Camry, Honda Accord, Nissan Altimas of the world.

Vehicle Type: A midsize sedan with seating for up to five people.

Powertrain: The base powertrain is a 1.6-liter turbocharged four-cylinder engine with 180 horsepower and 195 lb-ft of torque, with an eight-speed automatic transmission and front-wheel-drive or optional all-wheel-drive.

Optional is a turbocharged 2.5-liter four-cylinder with 290 horsepower and 311 lb-ft of torque, an eight-speed dual-clutch automated transmission, and front-wheel-drive. 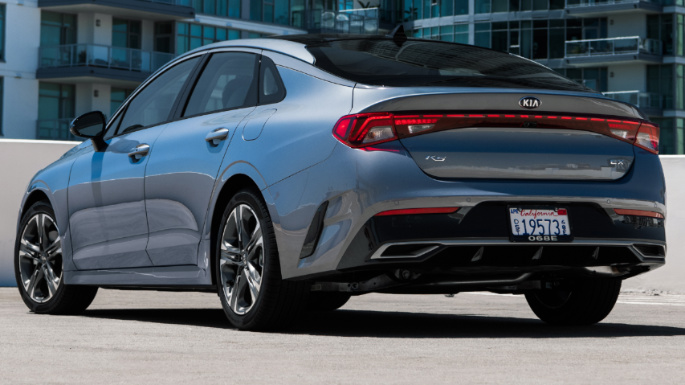 The Kia K5 is a brand new entry in the midsize sedan segment, replacing the Optima midsize sedan in Kia's lineup for 2021. It's a true sedan, as opposed to the sportback/hatchback style that its silhouette might suggest.

The K5 arrives when some manufacturers have moved away from midsize sedans altogether (Ford, Chevy, and Chrysler). Kia's commitment to the format is apparent in the K5, as it performs as well as, or better than, many upmarket sedans.

The new K5's big selling point is its packaging and driving experience. Kia packed the car with equipment in all of its forms and did so while keeping the price reasonable.

The K5's driving dynamics aren't especially remarkable among the class, even though it's a very composed car. Still, its turbocharged four-cylinder engines pair well with the eight-speed transmissions and chassis tuning to provide a confident driving experience. 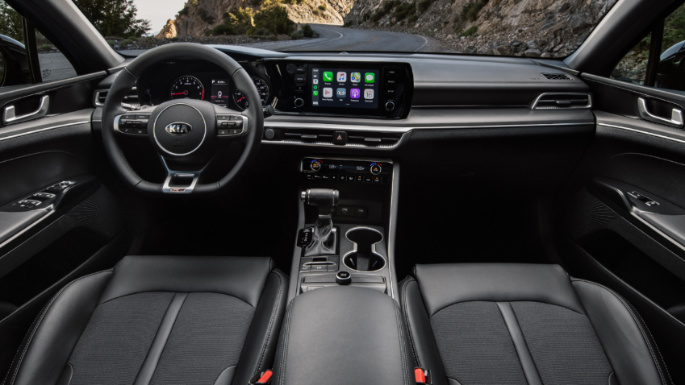 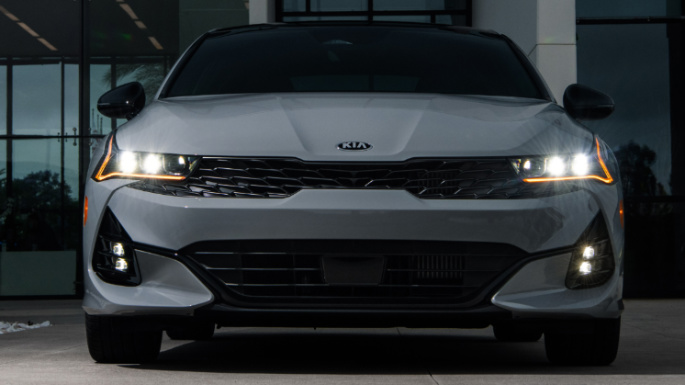 While the K5 tops out around $35,000 when fully equipped, it's still a solid value pick. Kia has a way with equipment choices and has given all K5 models a solid list of standard features that will keep buyers of all trims happy. The best part is that the base engine is more than lively enough for a fun drive, and the cars come standard with desirable features like Android Auto and Apple CarPlay connectivity.

Adding features and stepping up trim levels doesn't bump the K5's price tag considerably, landing around $30,000 for a well-equipped model that competes evenly with the likes of the Honda Accord and Nissan Altima. The mid-range LXS and GT-Line represent the best value, despite having a smaller engine. That money also buys a long 10-year/100,000-mile warranty. Only the mechanically related Hyundai Sonata can match that. 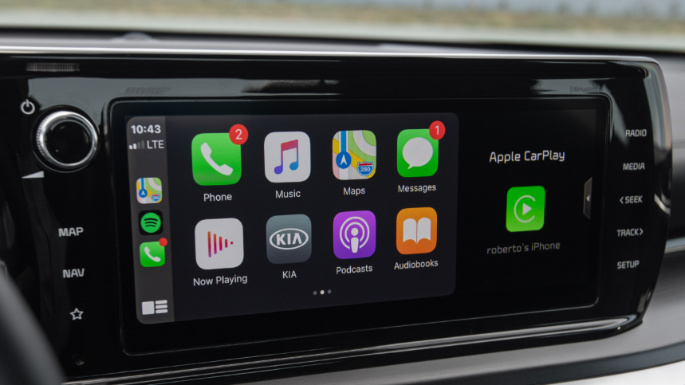 Kia's infotainment system is simple to use and logically designed. It doesn't have the color and animation that many systems employ, and the result is a piece of software that is less distracting, faster to respond, and quick to learn. 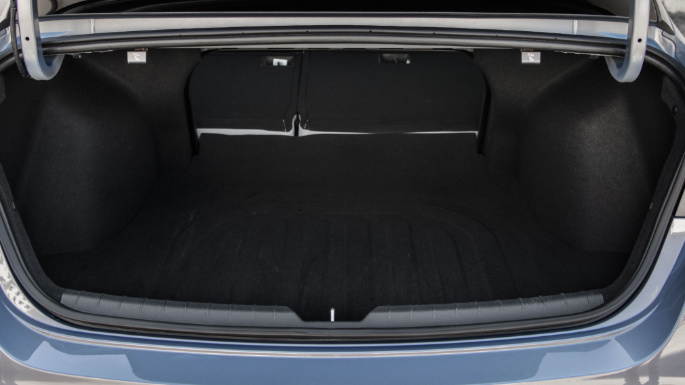 The K5 offers excellent head and legroom for a midsize sedan, and the trunk is generous for a car of its size despite its sloping roof and sporty styling. The Accord and more upright Subaru Legacy and Volkswagen Passat have it beat for spaciousness, but there's more than enough space for a family of four to get everyone and all gear inside.

The Kia also offers several useful storage spaces for small items, and larger areas such as the center console and glove box are more than acceptable for a sedan.

Available all-wheel-drive (AWD) dramatically improves the K5's ability to be an all-weather vehicle. The Legacy comes standard with AWD, and while it's an option on the Nissan Altima and Toyota Camry, it's a rare feature in this class. It doesn't turn the K5 into an SUV, but it adds much of the security and traction that makes buyers in this price range look at car-based SUVs like a Honda CR-V or Toyota RAV4. 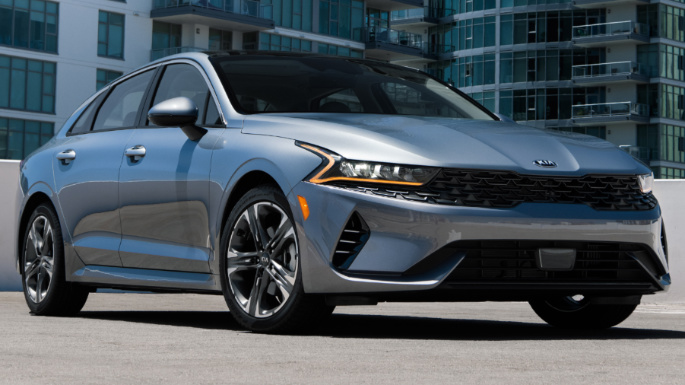 Kia's decision to style the K5 after the performance-oriented Stinger was a smart one. The fastback look serves to stretch the car's profile, and the roofline doesn't slope so considerably as to cut into the rear headroom. The car is sharp and stands out, especially on GT-Line and GT trims with larger wheels and distinctive trim accents. It's a look that doesn't blend in with other midsize sedans.

Inside, the K5's look defies its price tag, with premium materials, soft-touch coverings, and a fashion-forward but usable interior setup. Some trims, such as the GT-Line and GT, get unusually colorful upholstery that further bolsters their sporting intentions. The fact it's synthetic and not real leather may put some off, though, as the Mazda6 offers richer interior materials.

The dashboard layout is relatively intuitive, though the touchscreen's orientation can be difficult to see in some lighting situations. Still, the cabin setup offers an excellent vantage point from the driver's seat, as almost every display and control is oriented toward the driver for better usability. Outward visibility is solid from nearly all angles. Kia was able to achieve this with small pillars and a higher-than-normal driver's seating position. Even in its lowest setting, the seat remains higher than expected, which may cause discomfort for some, but improve visibility for others. 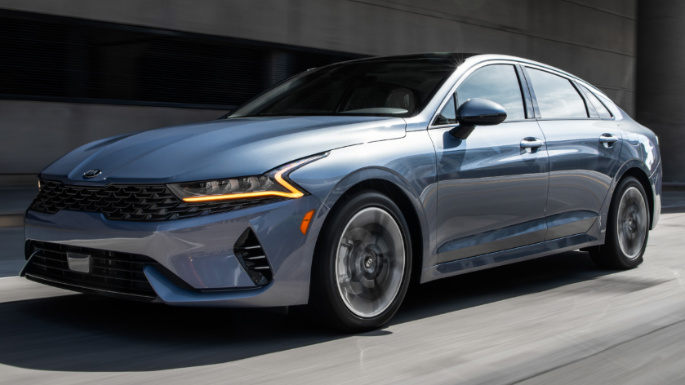 The K5 feels more refined than its predecessor, the Kia Optima. Even without the more powerful engine, the K5 remains planted and in control during spirited drives. The car squats into corners and comes out the other side willing and able to accelerate away confidently. That said, it's not as sporty to drive as its looks suggest, let alone as lively as a Mazda6 or well-rounded as an Accord.

The turbocharged 1.6-liter engine feels more robust than it appears on paper but does make quite a bit of noise under heavy acceleration. It also lacks a bit of low-end torque from a dead stop.

The GT's 2.5-liter turbo engine is significantly more robust and less strained, but both are more than capable in most driving situations. Reaching highway speeds is almost effortless for the K5 as well, and both engines provide ample passing power. The Kia's transmissions are also more pleasant than the continuously variable transmissions (CVT) that come on rivals from Honda, Nissan, and Subaru. However, those looking for a V6 engine will have to look at the Camry, as it's the only car in this class to offer one now. 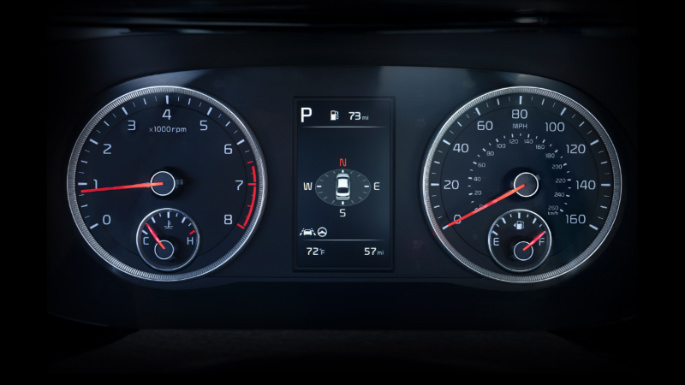 While those numbers are competitive, some versions of the Camry have higher ratings. And the Camry, along with the Accord and Sonata, also offer gas-electric hybrid versions with even better fuel economy figures. 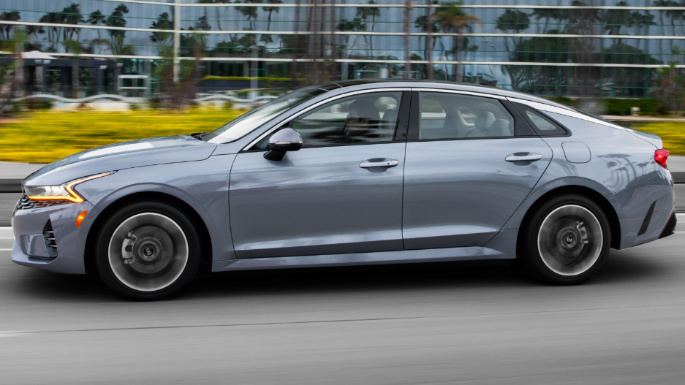 The K5 LXS 1.6T starts at $25,585 and adds outside door handle lighting, a 60/40 split-folding rear seat, Kia UVO Link services, remote engine start, remote trunk open, a blind-spot monitoring system, and rear cross-traffic alert. All-wheel-drive with heated front seats is an option. This is likely the trim we'd choose since it has all of the essentials without spending too much. ____