Powertrain: A 185-horsepower, 2.4-liter four-cylinder engine with a six-speed automatic and front-wheel-drive. All-wheel-drive is available. 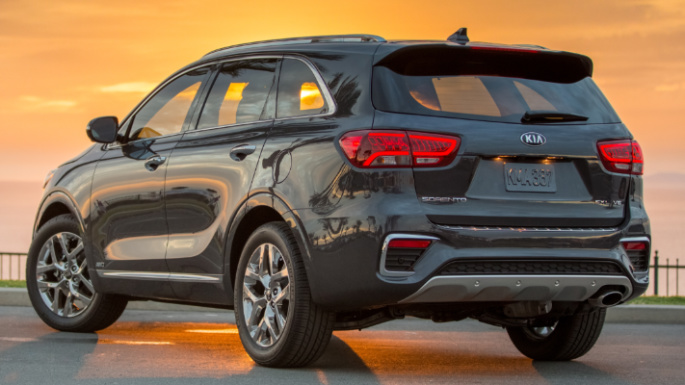 The 2020 Kia Sorento has been an established part of Kia’s lineup for two decades. Until recently, it was the company’s largest SUV and the go-to for its customers who demanded three rows of seats. Yet even as this current model ages, it’s a worthy opponent to the numerous similarly-sized rivals that have stormed onto the scene in recent years. With two engine choices and generous equipment levels at very reasonable prices, it’s still a formidable competitor.

For 2020, the Sorento gets a revised front end with new bumpers and lights, and also picks up some new taillight and rear bumper designs. The S and EX trim levels have been added, both with standard V6 engines.

The 2020 Sorento is available with two engines and in five trim levels. A new Sorento will go on sale for 2021. 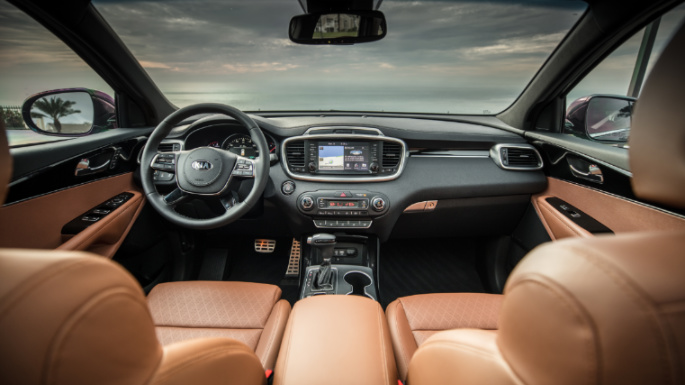 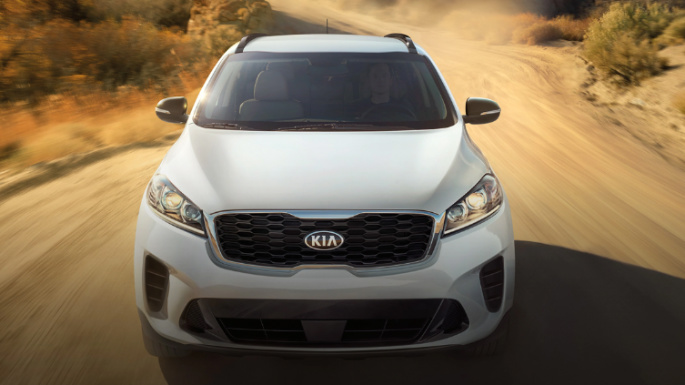 A Sorento L starts around $28,000 and comes reasonably well-equipped with alloy wheels, adaptive cruise control, and Apple CarPlay and Android Auto compatibility. Stepping up to an LX with the optional Convenience Package, however, adds a power driver’s seat, dual-zone automatic climate control, heated front seats, and forward-collision warning for around $31,000 – an excellent value for a three-row SUV, even if it’s a four-cylinder model.

Most Sorento buyers are likely to go with a V6, however. And at even around $34,000, the Sorento S is very well equipped against its rivals. But the top-level SX at less than $44,000 has more features and better finishes than some of its rivals do at $50,000. Apart from the low-priced Subaru Outback XT, most similarly-equipped Sorento SX rivals push $50,000 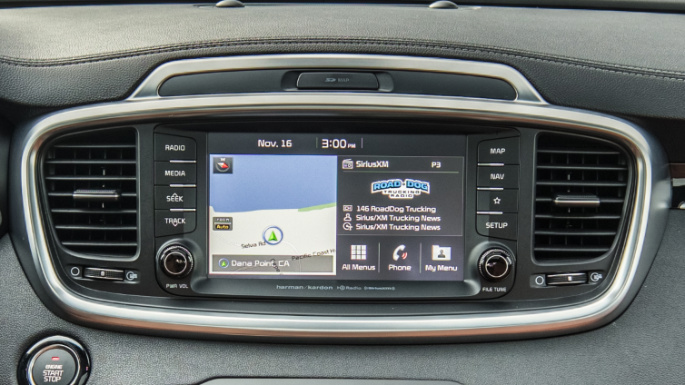 All Sorento models use a touchscreen infotainment system with Apple CarPlay and Android Auto compatibility. The seven-inch screen is one of the most responsive available and the infotainment system itself is one of the best in the business. Physical buttons and knobs in close proximity make finding commonly used functions even easier, unlike other vehicles in this class that put too many functions in the touchscreen. Even though only the top SX model gets a larger 8-inch touchscreen and built-in navigation, the base unit is mostly adequate.

It doesn’t compete with the Outback’s 11-inch vertical touchscreen, but that system makes both media and climate controls more difficult to use and its processor isn’t as sophisticated.

Other technology, aside from the driver assistance systems, include an electronic parking brake with auto-hold functions on EX and SX trims, as well as a driver attention monitor that can detect when the driver’s inputs have become lax or sloppy and it suggests stopping for a break. While the available power liftgate also includes hands-free operation and can be programmed for height, it comes only on EX and SX models. Only the top SX gets a wireless smartphone charging pad, too. Newer rivals are democratizing these features more of these newer features. 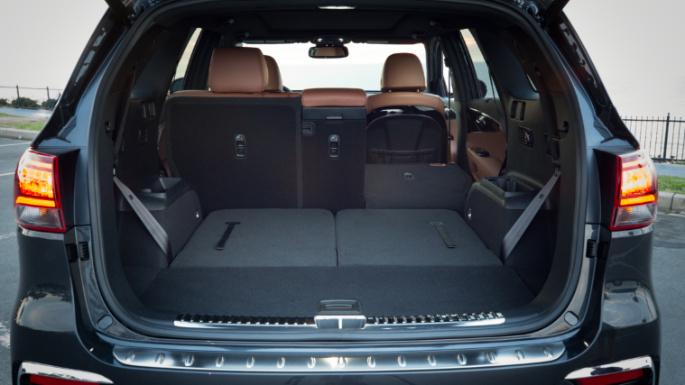 All Sorento models come with three rows of seats for up to seven passengers, unheard of in this class. That’s partly because the Sorento precedes the new Telluride, which is a more appropriately-sized model for the likes of the Honda Pilot and Subaru Ascent. While the third-row seat in the Sorento may even be a tight fit for kids, it’s best viewed as an emergency seat that can take two more kids in a pinch. The second row, however, is much more usable.

It slides back and forth, as well as splits into three sections with a 40/20/40 arrangement, rather than the typical 60/40. That allows long items such as skis or snowboards to fit inside and still allow room for two passengers in the rear.

At a maximum of 73 cubic feet of space, the Sorento skews towards the roomier end of this class, larger than the Ford Edge and Jeep Grand Cherokee and about what the Subaru Outback and VW Atlas Cross Sport can accommodate. It really only pales compared to the massive Honda Passport, which is an outlier among midsize SUVs.

The Sorento has a maximum towing capacity of up to 5,000 pounds when properly equipped. That’s about where most of the class stands, with the Blazer, Passport, and Atlas Cross Sport in that ballpark. The Ford Edge and Subaru Outback are at 3,500, and the Nissan Murano way back at 1,500. Only the Jeep Grand Cherokee, with its optional -- and massive -- V8 engine, can pull more than 7,000 pounds. 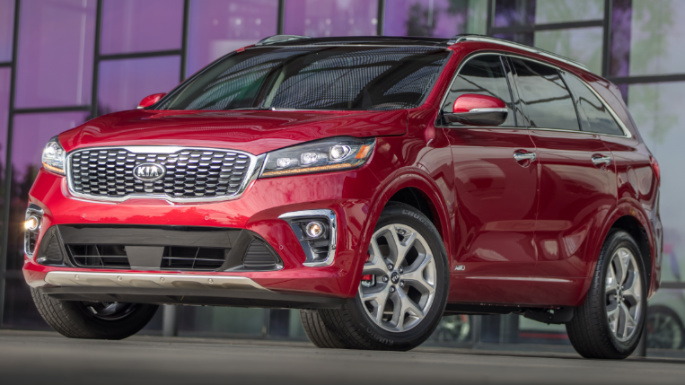 Kia gave the Sorento some nips and tucks for 2020, but the basic shape has been around for a few years, and a new model is coming for 2021. But it still looks relatively fresh, thanks to tweaks to the lights, grille, and wheels. L and LX models run on comparatively small 17-inch alloy wheels, while S and EX models get 19-inch wheels with black trim. The SX is more refined with a body-colored treatment and large wheels, too.

Similarly, the interior on the more basic models is adequate but doesn’t offer much in the way of detail flourishes. The SX, however, has excellent materials and supple leather upholstery that wouldn’t look out of place in some compact luxury SUVs.

Most people should be happy with the amount of storage space inside the vehicle, but it’s the ease of use of the controls that will please everyone. Buttons and knobs are large and clearly marked, and they’re all in the center of the dash in a way that isn’t overwhelming. One design oddity is that access to the third row of seats is only possible by sliding the right-side of the second row forward for a small passage. It isn’t possible on the left side, which is worth noting when attaching a child seat. 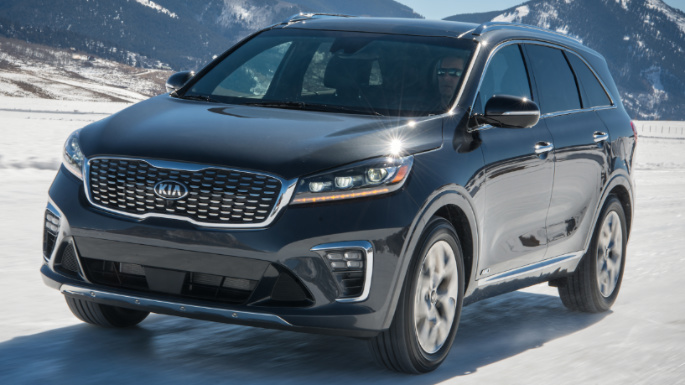 The Sorento L and LX models use a 185-horsepower 2.4-liter four-cylinder engine and a six-speed automatic. Many compact SUVs have more standard horsepower, as well as transmission with more gears. That immediately puts the midsize Sorento at a disadvantage, and it shows. Even though the Buick Envision, Chevy Blazer, Hyundai Santa Fe, and Subaru Outback also have four-cylinders without turbochargers as standard equipment, the Sorento is slow in terms of acceleration, although it’s likely adequate for city driving. Those looking for a burst of power, however, may be irritated by its lack of response.

Most Sorento buyers will likely find their way to one of the V6 models. The 290-horsepower 3.3-liter V6 is a marvel compared to the four-cylinder. And it’s smooth in general, sizing up well against the V6-powered Honda Passport, Jeep Grand Cherokee, Nissan Murano, and VW Atlas Cross Sport. In fact, the Sorento has more power than all of them, save for the Jeep. But the Grand Cherokee’s added weight hinders it unless you go for the massive 5.7-liter V8 option.

Like most SUVs of this type, the Sorento doesn’t exactly engage the driver. Steering and handling are just average, and even the new Hyundai Santa Fe shows where the Sorento falls behind. It also doesn’t exactly smother the bumps in the way the Nissan Murano does. Even more worryingly, the physically larger Atlas Cross Sport manages to handle more securely and feel a little smaller than the Sorento in the corners. 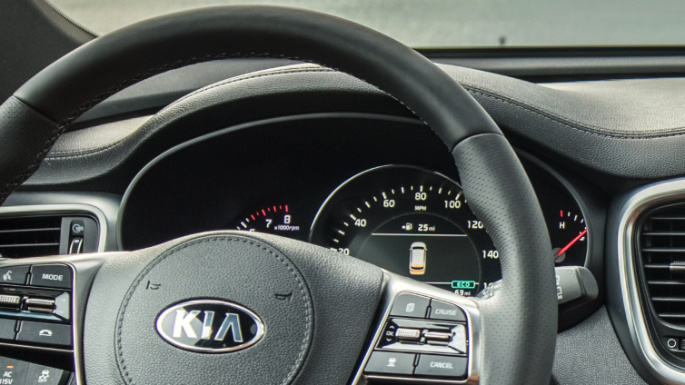 Without a three-row rival in this class, the Sorento does okay among some two-row rivals such as the Honda Passport, Jeep Grand Cherokee, and Volkswagen Atlas Cross Sport, which in V6 form are slightly less efficient. The Subaru Outback, however, is significantly more efficient at up to 29 mpg combined, even though both of its engine options are less powerful than the Sorento’s. But even the Ford Edge and its more powerful turbo V6 is more efficient than an all-wheel-drive V6 Sorento. And the Sorento V6 isn’t any more efficient than the much larger Telluride, so fuel economy is not this vehicle’s strength. 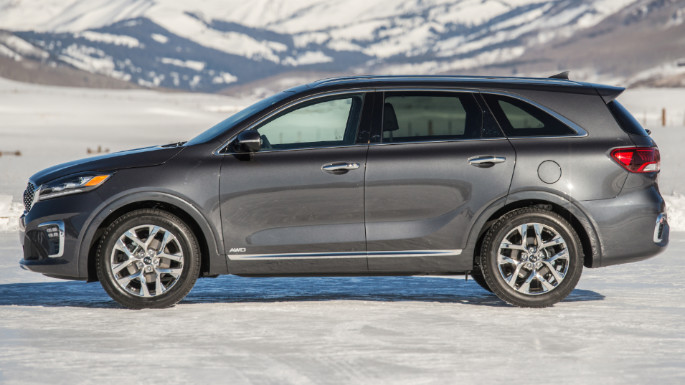 The 2020 Kia Sorento is from $28,110 and goes up to $43,010, including the $1,120 destination fee. The Sorento is available in five trim levels. Apart from certain packages, Kia doesn’t offer any options, only dealer-installed accessories.

The Sorento LX starts from $29,210 MSRP. It adds to the L blind-spot monitoring, rear cross-traffic alert, seatback pockets on the front seats, one-touch up and down operation for all power windows, and two USB charging ports. All-wheel-drive is optional.